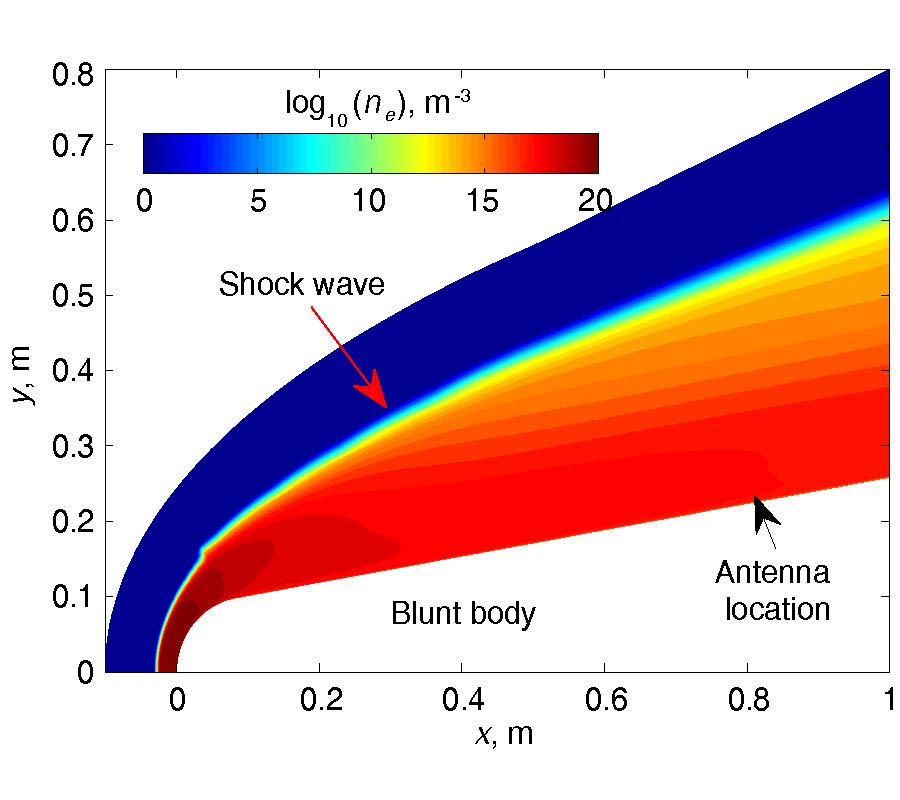 The radio blackout problem stands as one long obstacle for hypersonic flight and planetary atmosphere reentry. Rather than previous physical mitigation methods aiming to reduce the plasma electron density, this paper proposes a novel method which attempts to communicate at carrier frequency much higher than the plasma cutoff frequency. To overcome the highly dynamic channel characteristics, the reflected wave is used online to estimate the instantaneous channel states and enable adaptive transmission. According to the predicted channel states, the plasma sheath induced phase shift and amplitude attenuation are compensated by baseband modulation and power adaptation, respectively. Numerical simulations are presented and discussed, in order to illustrate the effectiveness of the proposed method.

In this paper we developed the method of broadband Green's function with low wavenumber extraction (BBGFL) for arbitrary shaped waveguide. The case of Neumann boundary condition is treated. The BBGFL has the advantage that when using it to solve boundary value problems in a waveguide, the boundary conditions have been satisfied already. The broadband Green's function is expressed in modal expansion of modes that are frequency independent. To accelerate the convergence of the Green's function, a low wavenumber extraction is performed. The singularity of the Green's function is also extracted by such low wavenumber extraction. Numerical results show that BBGLF and direct MoM are in good agreement. We next illustrate the application of BBGFL for broadband simulations of vias in printed circuit boards (PCB) by combining with the method of Foldy-Lax multiple scattering equation. The results show that BBGFL are in good agreement with MoM and HFSS. It is also shown that BBGFL is many times faster than direct MoM and HFSS. The computational efficiency in broadband simulations makes this technique useful for fast computer-aided design (CAD). 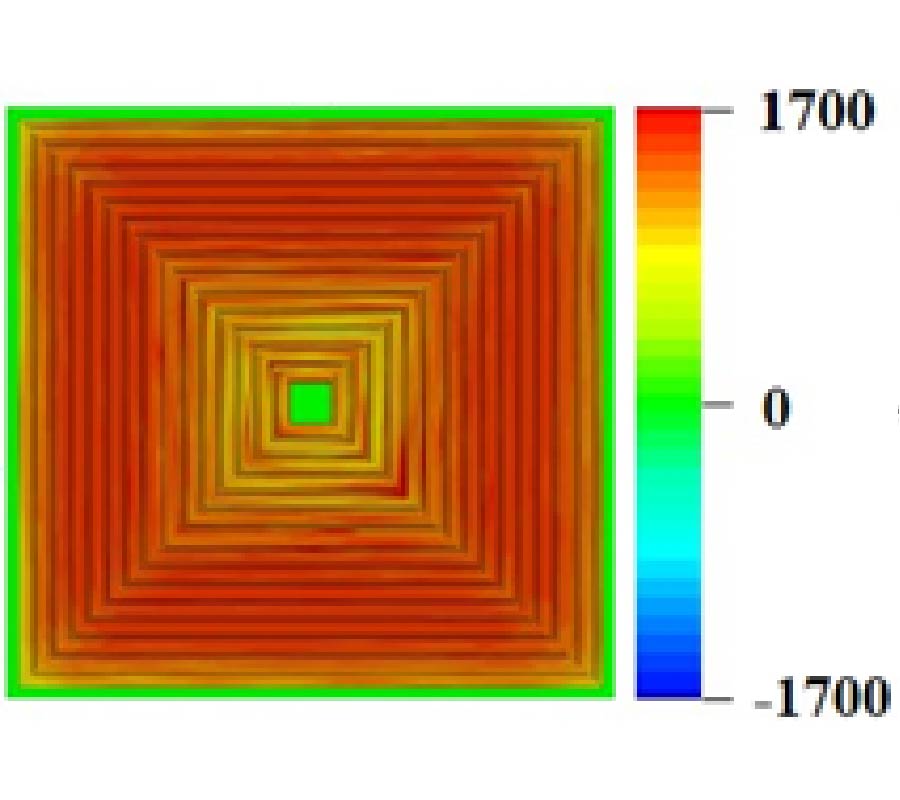 We present an extremely sub-wavelength negative index metamaterial structure operating at radio frequency. The unit cell of the metamaterial consists of planar spiral and meandering wire structures separated by dielectric substrate. The ratio of the free space wavelength to unit cell size in the propagation direction is record breaking 1733 around the resonance frequency. The proposed metamaterial also possesses the most extreme refractive index of -109 that has been recorded to date. Underlying magnetic and electric response originate from the spiral and meandering wire, respectively. We show that the meandering wire is the key element to improve the transparency of the negative index metamaterial. 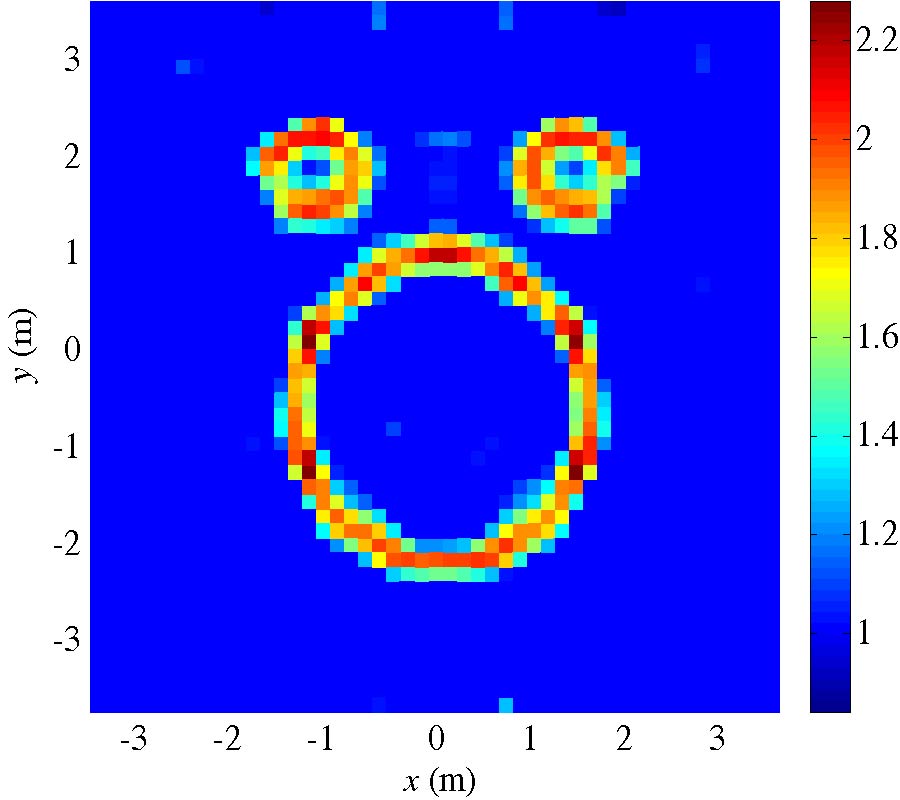 A scheme for efficiently solving the nonlinear electromagnetic inverse scattering problem on sparse investigation domains is described. The proposed scheme reconstructs the (complex) dielectric permittivity of an investigation domain from fields measured away from the domain itself. Least-squares data misfit between the computed scattered fields, which are expressed as a nonlinear function of the permittivity, and the measured fields is constrained by the L0/L1-norm of the solution. The resulting minimization problem is solved using nonlinear Landweber iterations, where at each iteration a thresholding function is applied to enforce the sparseness-promoting L0/L1-norm constraint. The thresholded nonlinear Landweber iterations are applied to several two-dimensional problems, where the ``measured'' fields are synthetically generated or obtained from actual experiments. These numerical experiments demonstrate the accuracy, efficiency, and applicability of the proposed scheme in reconstructing sparse profiles with high permittivity values. 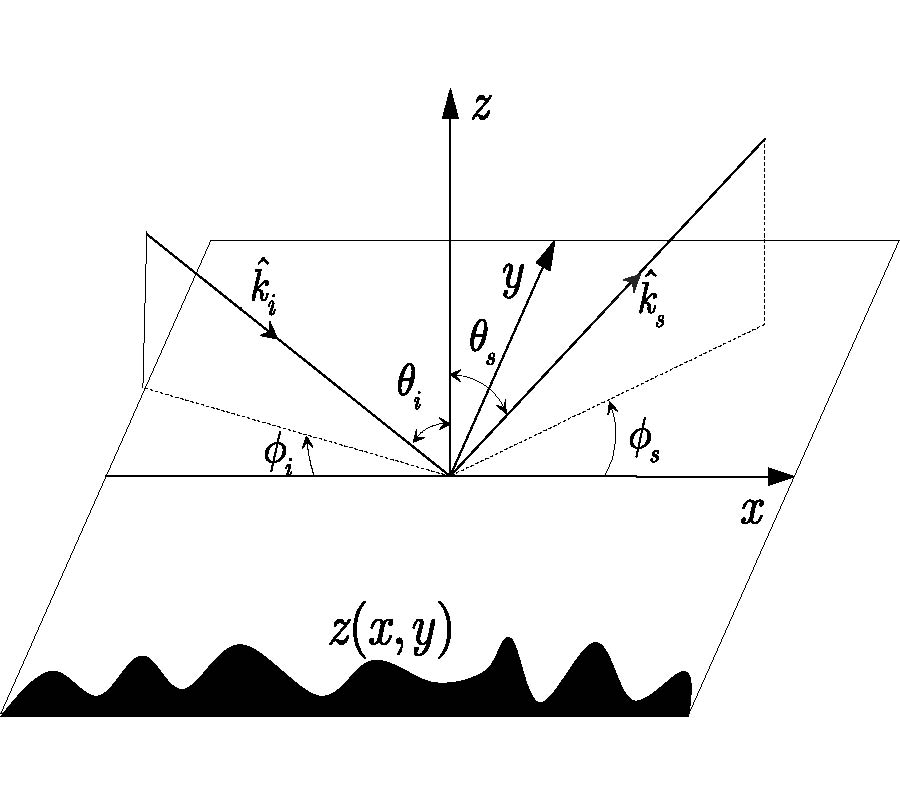 This paper deals with the modeling of bistatic scattering from a randomly rough surface. An advanced integral equation model is presented by giving its general framework of model developments, model expressions, and predictions of bistatic scattering for various surface parameters. Extension work to improve the model accuracy is also reported in more detail. In particular, the transition function for the Fresnel reflection coefficient is in more general form. Model predictions are illustrated, demonstrated, and validated by extensive comparisons with numerical simulations. The updated advanced integral equation model remains a compact algebraic form for single scattering and substantially improves prediction accuracy in bistatic scattering that is drawing more emerging applications in earth remote sensing. 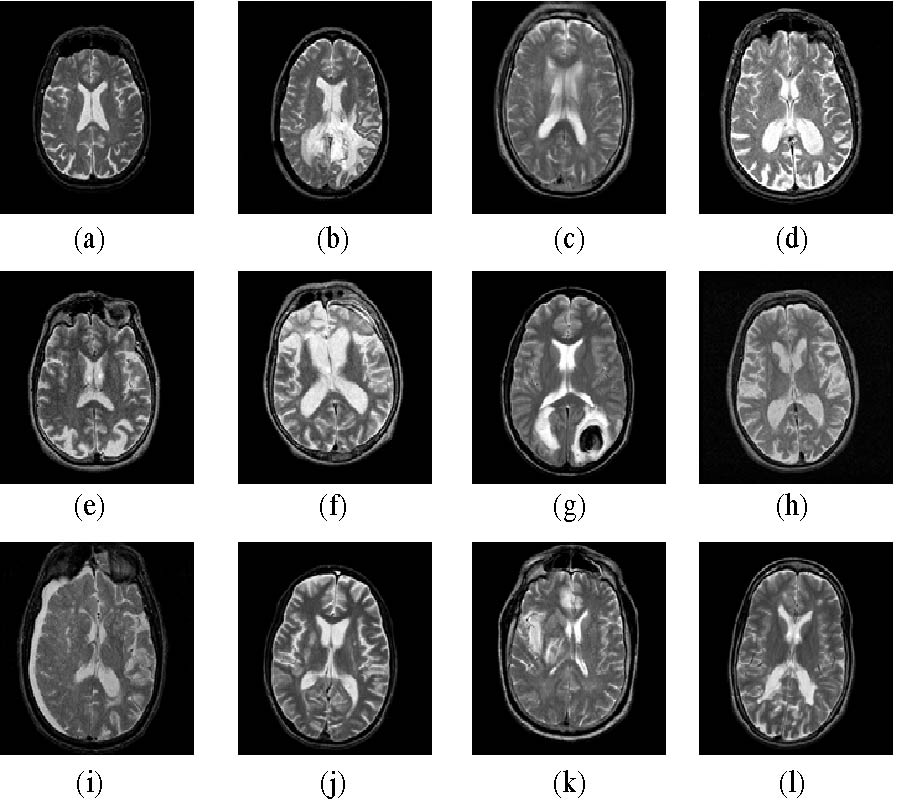 (Background) We proposed a novel computer-aided diagnosis (CAD) system based on the hybridization of biogeography-based optimization (BBO) and particle swarm optimization (PSO), with the goal of detecting tumors from normal brains in MRI scanning. (Methods) The proposed method used wavelet entropy (WE) to extract features from MR brain images, followed by feed-forward neural network (FNN) with training method of a Hybridization of BBO and PSO (HBP), which combined the exploration ability of BBO and exploitation ability of PSO. (Results) The 10×K-fold cross validation result showed that the proposed HBP outperformed existing FNN training methods and that the proposed WE + HBP-FNN outperformed state-of-the-art CAD systems of MR brain classification in terms of classification accuracy. Moreover, the proposed method achieved accuracy of 100%, 100%, and 99.49% over Dataset-66, Dataset-160, and Dataset-255, respectively. The offline learning cost 208.2510 s for Dataset-255, and merely 0.053 s for online prediction. (Conclusion) The proposed WE + HBP-FNN method achieved nearly perfect detection on tumors in MRI scanning. 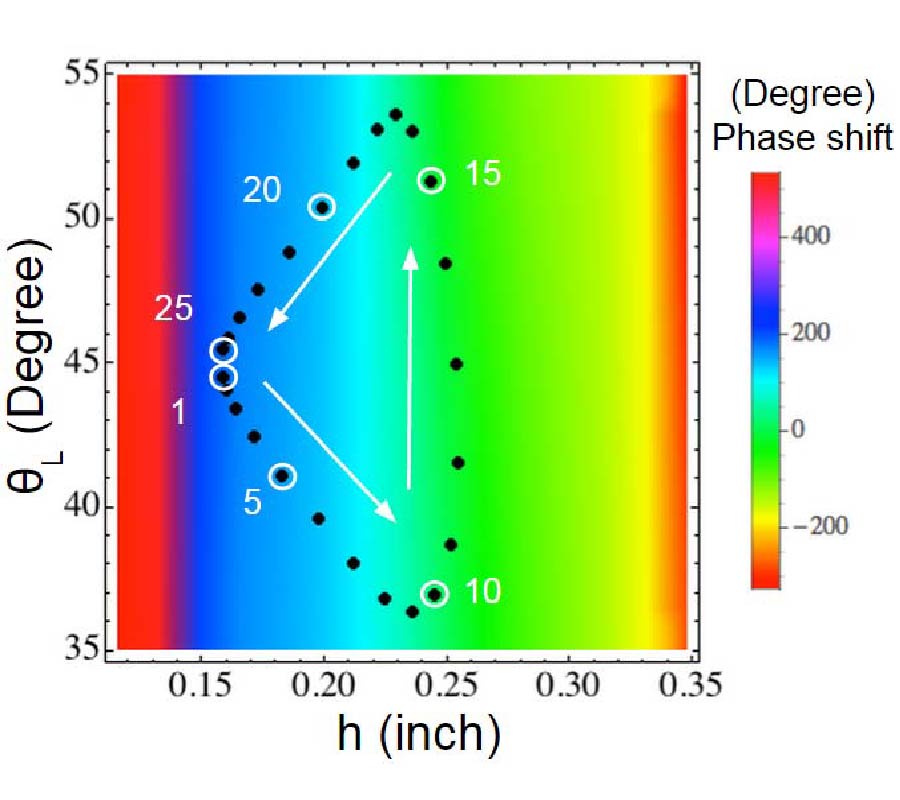 We demonstrate a novel and simple geometrical approach to cloaking a scatterer on a ground plane. We use an extremely thin dielectric metasurface to reshape the wavefronts distorted by a scatterer in order to mimic the reflection pattern of a flat ground plane. To achieve such carpet cloaking, the reflection angle has to be equal to the incident angle everywhere on the scatterer. We use a graded metasurface and calculate the required phase gradient to achieve cloaking. Our metasurface locally provides additional phase to the wavefronts to compensate for the phase difference amongst light paths induced by the geometrical distortion. We design our metasurface in the microwave range using highly sub-wavelength dielectric resonators. We verify our design by full-wave time-domain simulations using micro-structured resonators and show that results match theory very well. This approach can be applied to hide any scatterer under a metasurface of class C1 (first derivative continuous) on a ground plane not only in the microwave regime, but also at higher frequencies up to the visible. 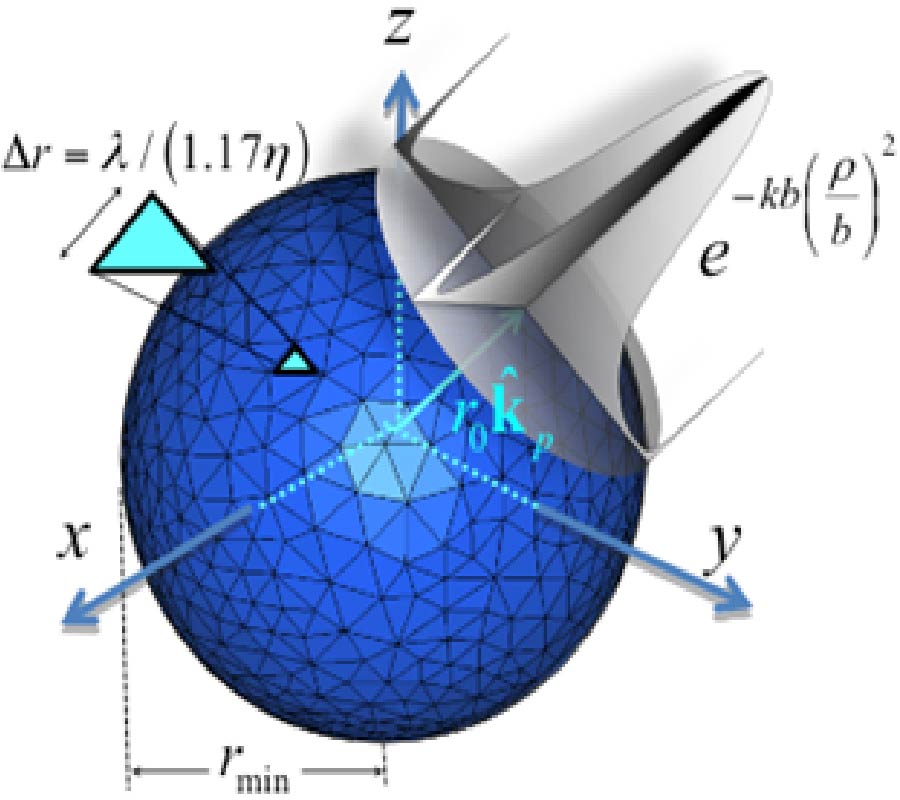 This paper discusses methods for expanding fields radiated by arbitrary sourcesenclosed by a certain minimum sphere in termsof Complex Source Point (CSP) beams. Two different approaches are reviewed; the first one is based on a spectral radiation integral, where the Fourier-spectrum is obtained by far field matching. The second approach consists of two steps: first, the equivalence principle is applied to a sphere enclosing the real sources, and a continuous equivalent electric current distribution is obtained in terms of spherical waves; then, the continuous current is extended to complex space and its SW components are properly filtered and sampled to generate the discrete set of CSPs. In both cases, the final resultis a compact finite series representation with a number of terms that matches the degrees of freedom of arbitrary radiated fields;it is particularly efficient when the fields are highly directional and the observation domain is limited to a given angular sector. The fact that the CSPs rigorously respect Maxwell's equations ensures the validity of the expansion from near to far zone and allows one to incorporate the CSP representation in a generalized admittance matrix formalism for the analysis of complex problems. 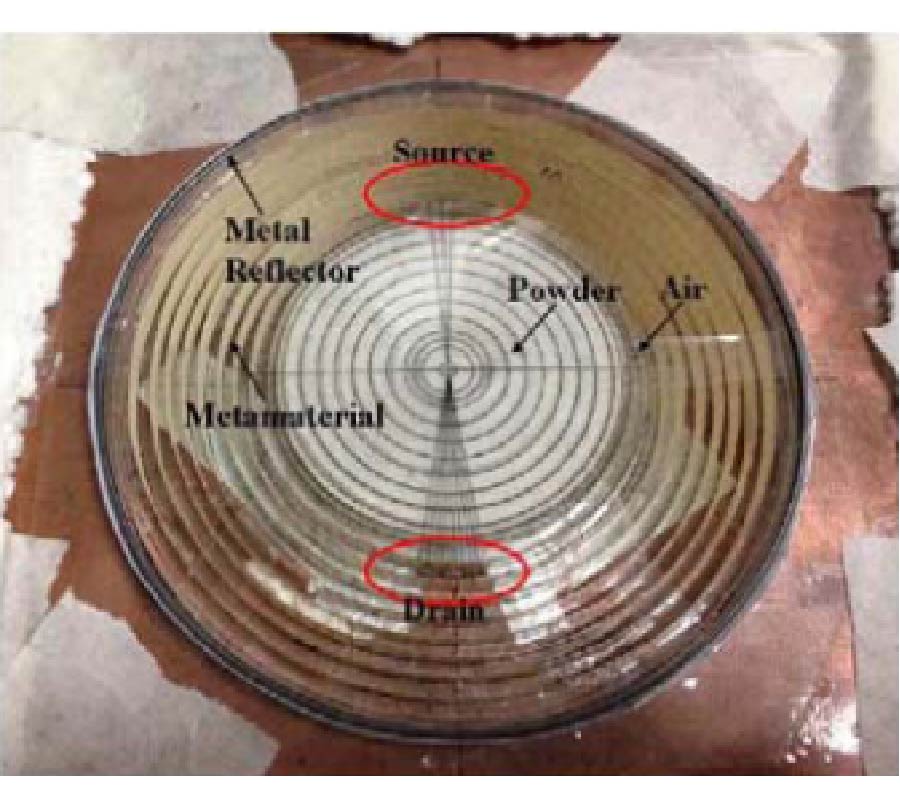 Can Maxwell's Fish Eye Lens Really Give Perfect Imaging? Part III. a Careful Reconsideration of the ``Evidence for Subwavelength Imaging with Positive Refraction''

Many scientists do not believe that Maxwell's fish eye mirror (MFEM) can provide perfect imaging even if there is a drain array around the imaging points. However, one microwave experiment found a case where a 0.2λ resolution could be achieved in an MFEM experiment [New J. Phys. 13 (2011) 033016]. In this paper, we show that the MFEM cannot resolve two imaging points at such a subwavelength resolution in most cases even in the presence of a drain array, and an extraordinary case of subwavelength imaging requires a particular phase difference between two coherent sources. Both numerical simulations and experimental results show that the phase difference of two subwavelength-distanced coherent sources greatly influences the field distribution around the drain array. In very few cases (when the phase difference of the two sources is chosen to be a very specific value), we might resolve the image points in the drain array under the assumption that the power absorbed by the scanning cable on the left side of the drain array should be symmetric to that on the right side of the drain array [New J. Phys. 13 (2011) 033016]. However, in most cases, we cannot obtain a super-resolution imaging, as other drains around the image points will greatly influence the imaging. We also note that the experiment assumed that the power absorbed by the scanning cable on the left and the right sides of the drain array is symmetric is not correct for the experiment reported in [New J. Phys. 13 (2011) 033016], as the drain array itself is not symmetric. The highly non-symmetric distribution of the absorbed power is also verified by our simulation and experimental results. The experimental ``result'' of resolving two image peaks could potentially be recovered using only a single image peak, which demonstrates the wrong assumption of mirror symmetry. Comparisons and comments on perfect passive drains, ``super-resolution'' in a spherical geodesic waveguide, and time reverse imaging are also given.