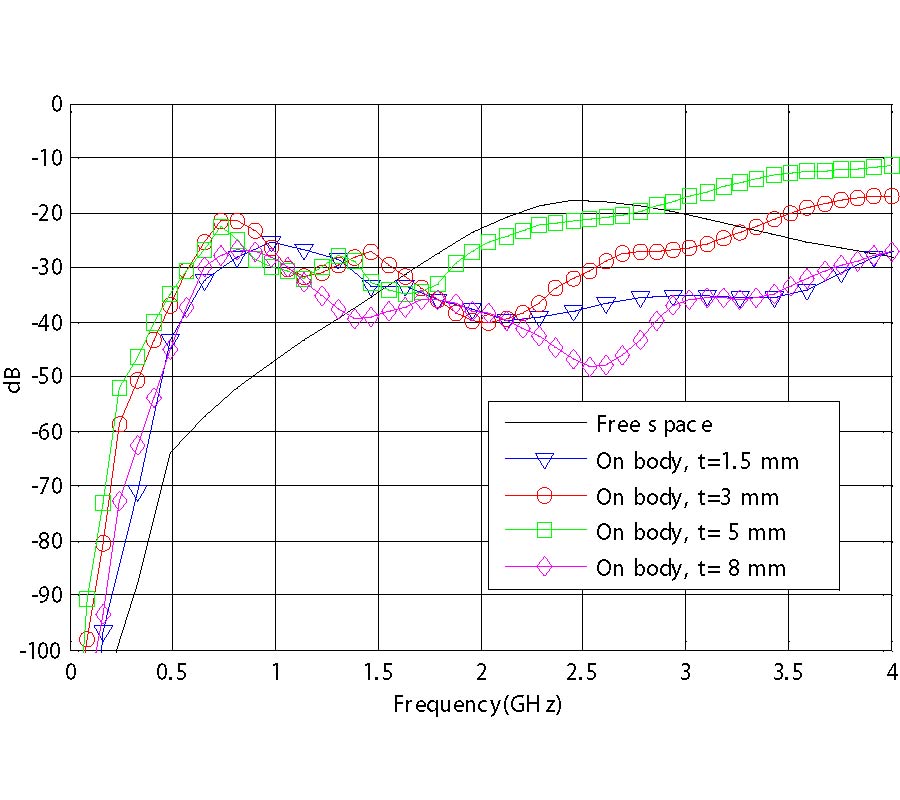 Analysis of on-Body Transponders Based on Frequency Selective Surfaces

This paper proposes a backscattering communication technique based on modulated frequency selective surfaces (FSS) for wearable applications. The FSS is composed of dipoles loaded with varactor diodes to modulate the backscatter response, in order to separate it from the clutter. The paper describes the effect in the transponder response according to the number of dipoles, the separation between them and the effect produced when FSS is placed on-body. An analysis based on simulations of several cases and experimental results is provided. 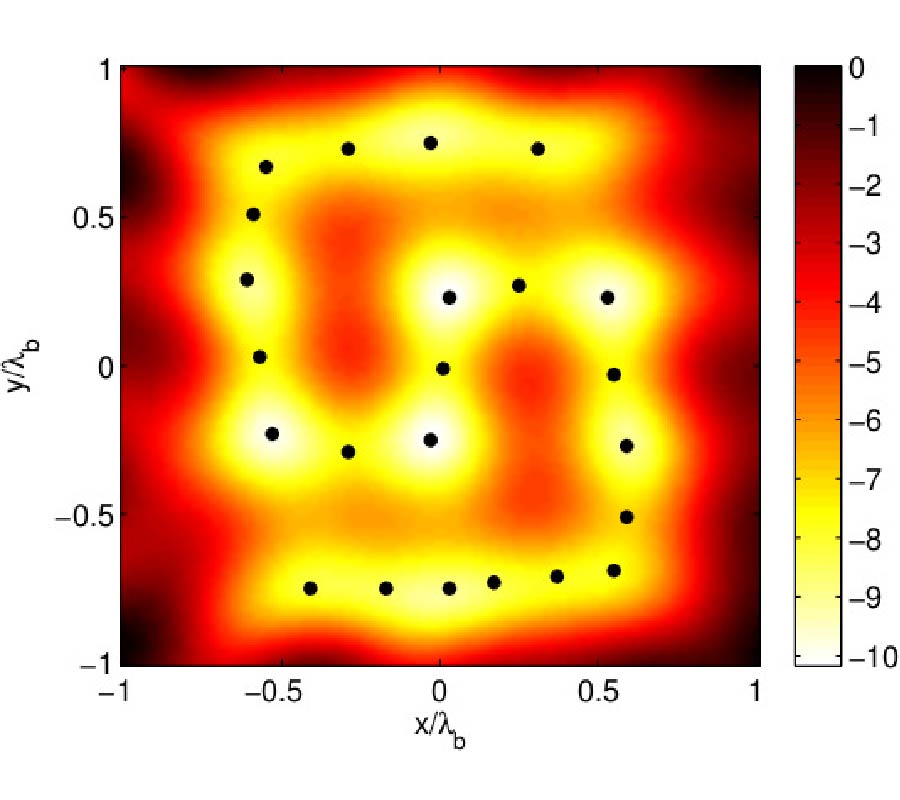 The Factorization Method for Virtual Experiments Based Quantitative Inverse Scattering

The concept of virtual experiments is based on the idea of solving the inverse scattering problem by processing a suitable recombination of the available data, instead of those arising from the measurements. By properly designing such experiments (and without additional measurements), it is possible to enforce some peculiar field's or contrast source's properties, which can be helpful to perform the inversion in a more simple and reliable way. In this paper, we show that the factorization method can be used as a tool to design the virtual experiments. In doing so, we also provide, for the first time, an insight into its physical meaning. As an example, we exploit the virtual experiments designed via FM as the backbone of a linearized inversion approach for quantitative imaging of non-weak targets. 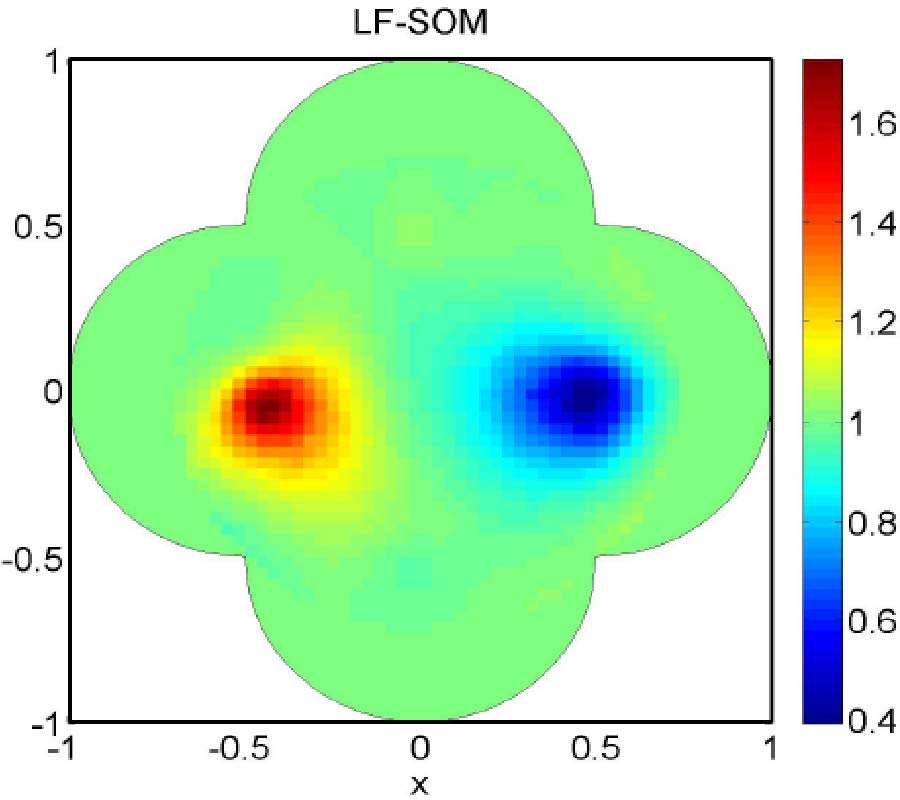 Two numerical methods are proposed to solve the electric impedance tomography (EIT) problem in a domain with arbitrary boundary shape. The rst is the new fast Fourier transform subspace-based optimization method (NFFT-SOM). Instead of implementing optimization within the subspace spanned by smaller singular vectors in subspace-based optimization method (SOM), a space spanned by complete Fourier bases is used in the proposed NFFT-SOM. We discuss the advantages and disadvantages of the proposed method through numerical simulations and comparisons with traditional SOM. The second is the low frequency subspace optimized method (LF-SOM), in which we replace the deterministic current and noise subspace in SOM with low frequency current and space spanned by discrete Fourier bases, respectively. We give a detailed analysis of strengths and weaknesses of LF-SOM through comparisons with mentioned SOM and NFFT-SOM in solving EIT problem in a domain with arbitrary boundary shape. 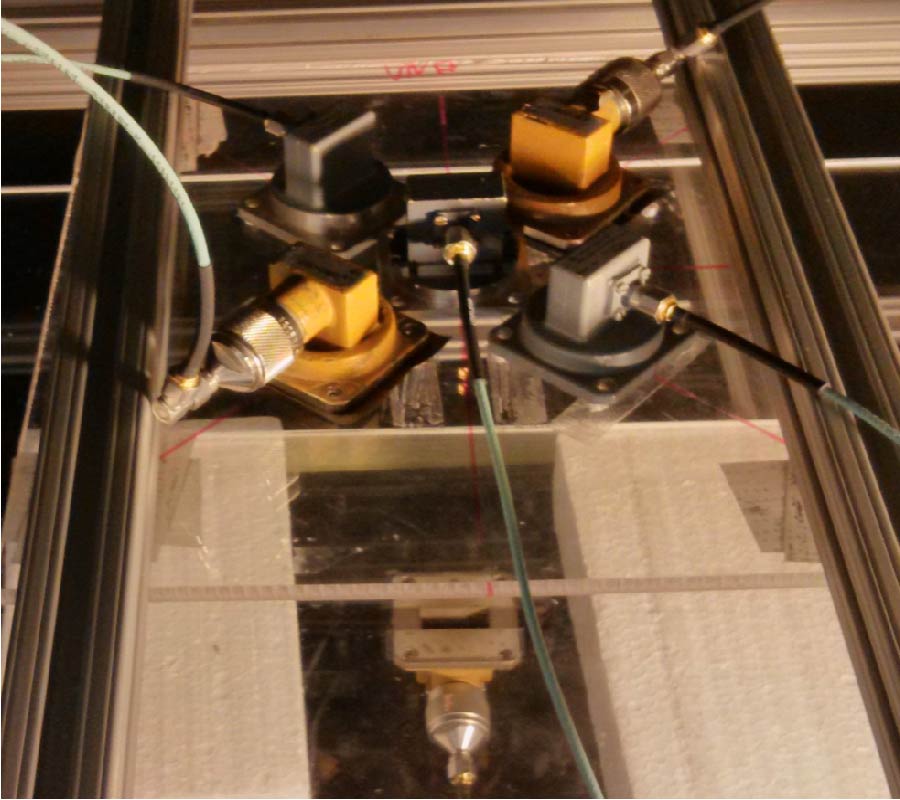 Axial-null illumination (ANI) is proposed to simplify the calibration of microwave imaging systems. The illumination also enhances the spatial resolution. ANI can be achieved with various array configurations, but a minimum of two transmitting antennas are required, which is a well-known form of differential illumination. Here, ANI is achieved with four transmitting antennas, and its implementation is investigated in a planar scanning scenario. The receiving antenna resides at the radiation null of the ANI array. Back-scattered reception requires an antenna at the center of the ANI array whereas forward-scattered reception requires an antenna aligned with the ANI axis, but on the opposite side of the imaged volume. The most important advantage of the proposed imaging setup is that it eliminates the need for background (or baseline) measurements, thus simplifying the system calibration. Also, it is proven that at least two-fold improvement in the spatial resolution can be achieved in near-field imaging scenarios compared to the conventional single-source illumination. 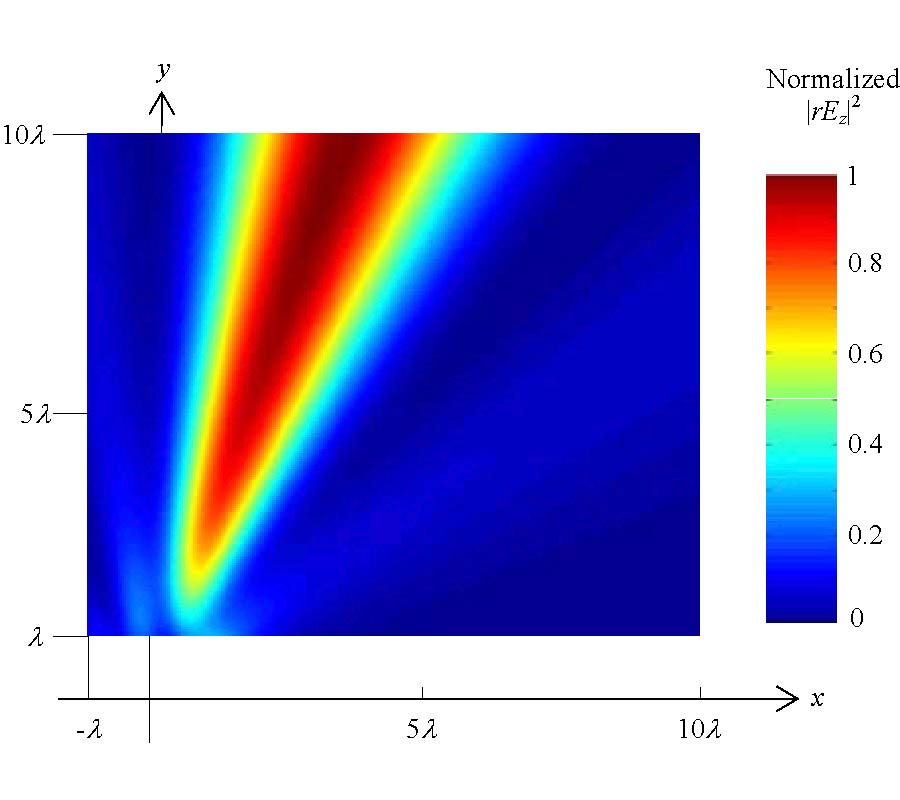 Applications of metallic metamaterials have generated significant interest in recent years. Electromagnetic behavior of metamaterials in the optical range is usually characterized by a local-linear response. In this article, we develop a finite-difference time-domain (FDTD) solution of the hydrodynamic model that describes a free electron gas in metals. Extending beyond the local-linear response, the hydrodynamic model enables numerical investigation of nonlocal and nonlinear interactions between electromagnetic waves and metallic metamaterials. By explicitly imposing the current continuity constraint, the proposed model is solved in a self-consistent manner. Charge, energy and angular momentum conservation laws of high-order harmonic generation have been demonstrated for the first time by the Maxwell-hydrodynamic FDTD model. The model yields nonlinear optical responses for complex metallic metamaterials irradiated by a variety of waveforms. Consequently, the multiphysics model opens up unique opportunities for characterizing and designing nonlinear nano devices.

Metamaterials have been previously loaded with diodes and other types of passive circuit elements. Transistors offer an alternative to these established loading elements to expand the possible capabilities of metamaterials. With embedded transistors, additional degrees of freedom are achieved and lay out the architecture for more complex electromagnetic metamaterial design. A mathematical analysis of transistor loaded SRR unit cells is described in which the transistor acts as a variable resistor. From the mathematical analysis, we calculate transmission coefficients for a single unit cell. We then experimentally measure two SRRs with tunable quality factors and thus tunable bandwidth based upon modulating the effective loading circuit resistance to confirm the calculations. From the agreement between the calculated and measured transmission coefficients, we expand the analysis to show that a slab of more densely packed unit cells can achieve negative permeability with varying degrees of dispersion. 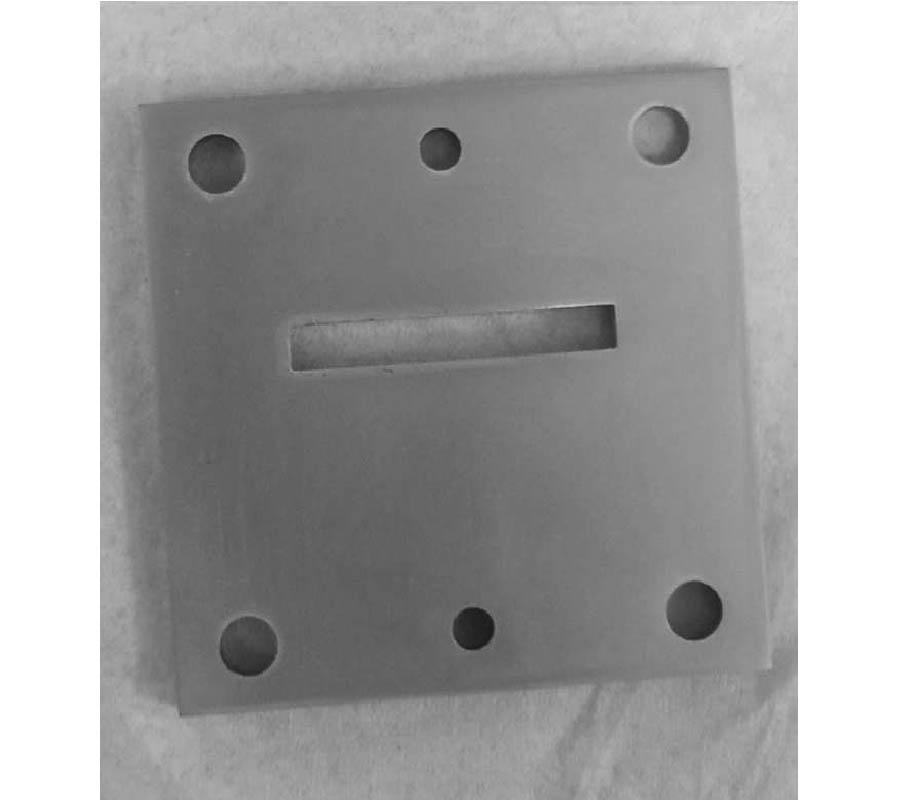 A method for predicting the behavior of the permittivity and permeability of an engineered material by examining the measured S-parameters of a material sample is devised, assuming that the sample is lossless and symmetric. The S-parameter conditions under which the material parameters extracted using the Nicolson-Ross-Weir method may be associated with a lossless homogeneous material are described. Also, the relationship between the signs of the real and imaginary parts of the permittivity and permeability are determined, both when the extracted material parameters are real and when they are complex. In particular, the conditions under which metamaterials exhibit double-negative properties may be predicted from the S-parameters of a metamaterial sample. The relationships between material characteristics and the S-parameters should prove useful when synthesizing materials to have certain desired properties. Examples, both from experiment and simulation, demonstrate that the relationships may be used to understand the behavior of several different categories of engineered materials, even when the materials have appreciable loss. 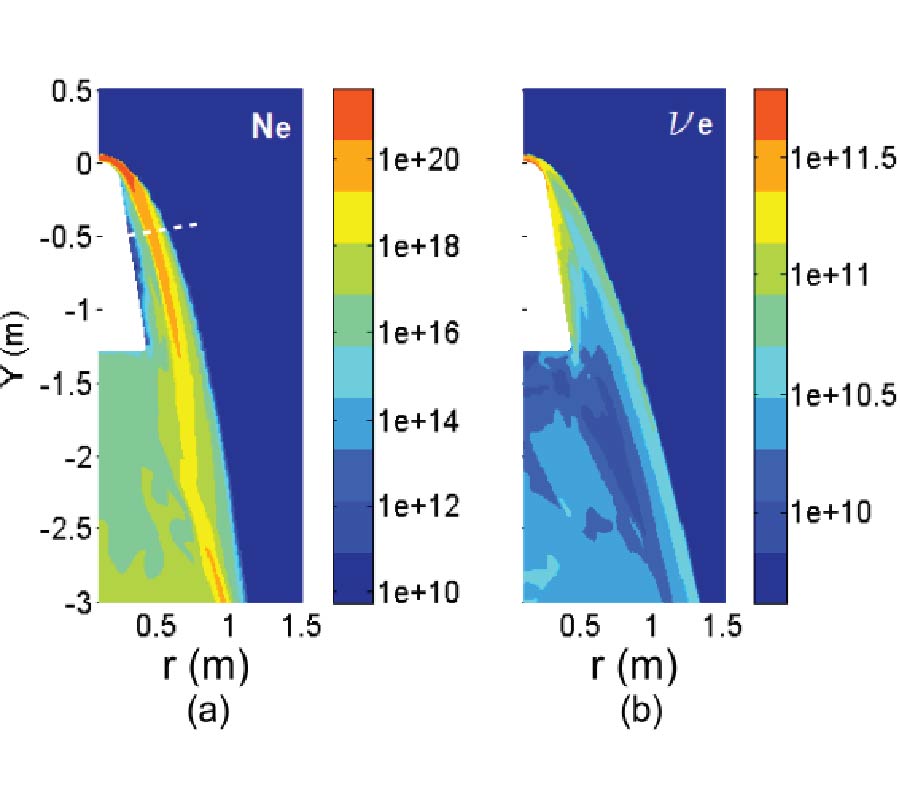 Communication `blackout' is a big challenge for modern space engineering. In the recent decade, the terahertz (THz) technology is believed to be an effective solution for the `blackout' problem. Many research works about the transmission of THz waves in plasma slabs have been carried out. According to those works, the radio attenuation of THz waves in plasma slabs strongly depends on thickness of the slab, electron density, electron collision frequency and temperature. However, few previous works have paid attention to realistic reentry plasma sheath. In the present paper, a hypersonic fluid model is introduced in order to investigate the structure of the realistic plasma sheath which covers a blunt coned vehicle. The scattering matrix method is employed to study the transmission of THz waves in realistic plasma sheath. According to the present study, the wave frequency, electron density and collision frequency are the most significant factors which determine the attenuation of the THz waves in the plasma sheath. Since the whole plasma sheath is inhomogeneous, to install the antenna at an appropriate position helps mitigate the `blackout'. For the blunt coned reentry vehicle, installing the antenna on the wall close to the bottom is helpful for mitigating the `blackout' problem.

Energy conservation is an important consideration in wave scattering and transmission from random rough surfaces and is particularly important in passive microwave remote sensing. In this paper, we study energy conservation in scattering from layered random rough surfaces using the second order small perturbation method (SPM2). SPM2 includes both first order incoherent scattering and a second order correction to the coherent fields. They are combined to compute the total reflected and transmitted powers, as a sum of integrations over wavenumber kx, in which each integration includes the surface power spectra of a rough interface weighted by an emission kernel function (assuming the roughness of each interface is uncorrelated). We calculate the corresponding kernel functions which are the power spectral densities for one-dimensional (1D) surfaces in 2D scattering problems and examine numerical results for the cases of 2 rough interfaces and 51 rough interfaces. Because it is known that the SPM when evaluated to second order conserves energy, and it can be applied to second order for arbitrary surface power spectra, energy conservation can be shown to be satisfied for each value of kx in the kernel functions. The numerical examples show that energy conservation is obeyed for any dielectric contrast, any layer configuration and interface, and for arbitrary roughness spectra. The values of reflected or transmitted powers predicted, however, are accurate only to second order in surface roughness.