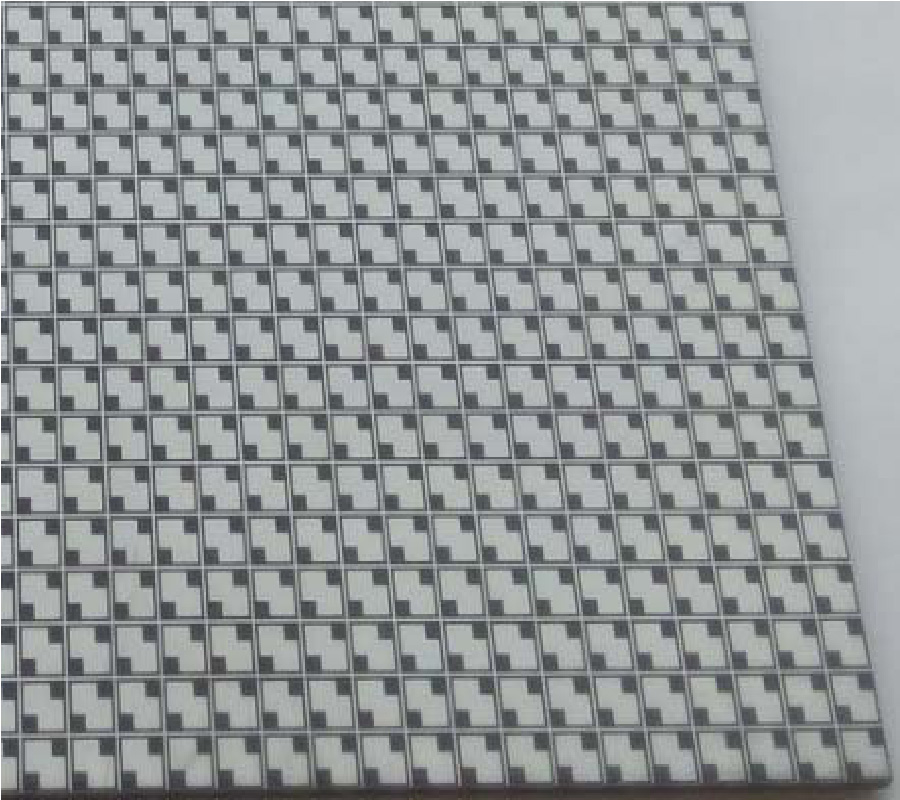 In this work, a wide-angle and wide-band transmission-type circular polarizer based on a bi-layer anisotropic metasurface is proposed, in which the unit cell consists of two layers of identical patterned metal films deposited on the two sides of a homogeneous dielectric layer, and the geometric pattern of the metal film is a square aperture surrounding a concentric square-corner-truncated square patch. The simulated results show that the polarizer can realize a linear-to-circular polarization conversion at both x- and y-polarized incidences in the frequency range from 7.63 to 11.13 GHz with a relative bandwidth of 37.3%, and it can maintain a stable polarization conversion performance under large-range incidence angles. Moreover, it has no asymmetric transmission effect, and the transmission coefficients at x- and y-polarized incidences are completely equal. Finally, one experiment is carried out, and the simulated and measured results are almost in agreement with each other.

The effect of users on the efficiency of mobile terminal antennas at 15 GHz, 28 GHz and 60 GHz is studied in this paper. It is performed using three four-element planar arrays. The first operates at 15 GHz with a bandwidth of 0.74 GHz, the second at 28 GHz with a bandwidth of 2.5 GHz and finally the third antenna at 60 GHz with bandwidth of 12.5 GHz. The effect of a user's finger is studied when being placed on four different locations over each antenna element, with six distances between the antenna and user's finger. The losses due to the increased shadowing are studied in terms of radiation efficiency (RE), matching efficiency (ME) and two additional multiple-input-multiple-output (MIMO) parameters i.e., envelop correlation coefficient (ECC) and multiplexing efficiency (MUX). For antennas operating at 28 and 60 GHz, the minimum frequency shift is observed when the finger is placed at 1.5 mm distance from the antenna, whereas for 15 GHz, the minimum resonance shift is observed when the finger is at 2 mm distance. Losses of up to 80% and 70% are observed for RE and MUX, respectively, when the finger is placed at 0 mm for all antennas compared to the case without user (WU). Finally, it is observed that the ME and envelop correlation coefficient losses are insignificant regardless of the antenna and finger variation.

Electromagnetic band gap (EBG) structures offer unique solutions for effectively manipulating electromagnetic waves over a broad range of frequencies for a wide range of applications. However, most EBG designs reported so far either require sophisticated fabrication processes or have limited tunability and reconfigurability. In this paper, we investigate the potential to implement high performance tunable and reconfigurable EBG components using a novel optical control approach. This technology allows the generation of EBG structures through spatially-resolved photogeneration of free carriers in a semiconductor, without any complex fabrication processes. As a prototype demonstration, a reconfigurable microwave frequency tunable band-stop filter (BSF) based on photo-induced uniplanar EBG structures has been investigated through simulation. In this approach, the required EBG patterns are directly illuminated onto a Ge ground plane mounted to the bottom of a Duroid substrate for tunability using a digital light processing (DLP) projector. On the basis of HFSS simulations, the bandwidth of the BSF can be tuned by modifying the EBG pattern filling factor. The center frequency of the BSF could also be tuned from 8-12 GHz by adjusting the period of the EBG structure. In addition, two limiting factors, i.e., localized heating effects and finite lateral spatial resolution (due to carrier diffusion), that may affect the circuit performance in this technology have been investigated and discussed. By using a mesa-array structured ground plane, this approach is promising for developing tunable and reconfigurable circuits such as filters from the microwave to terahertz regimes. 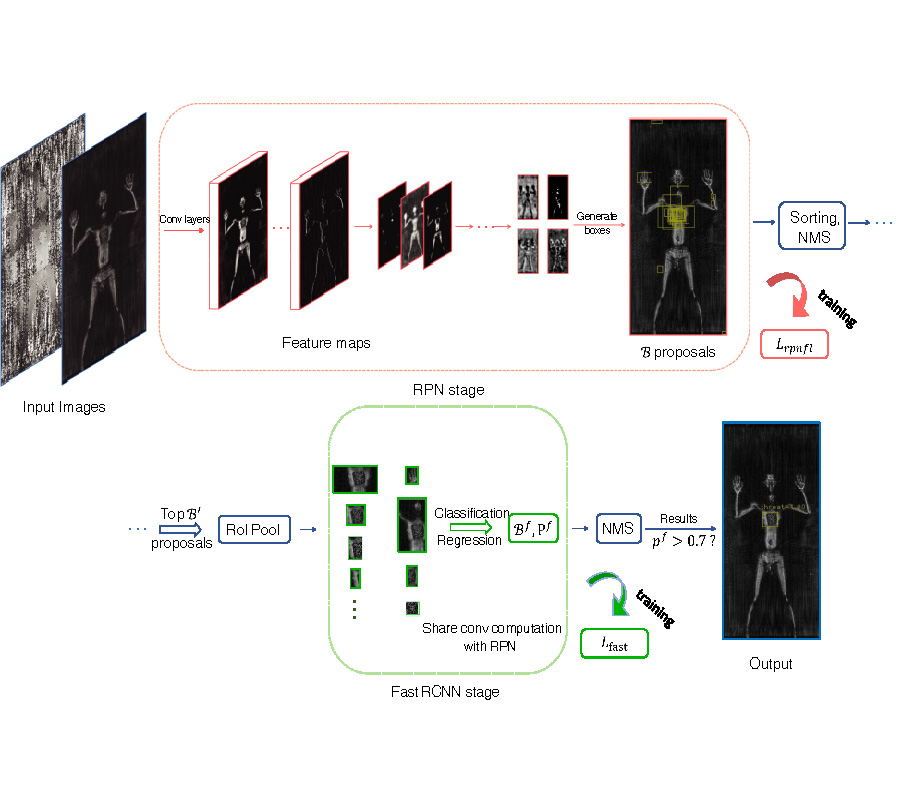 With the ever-growing requirements of human security check in public, near-field millimeter wave (MMW) imaging techniques have been developing rapidly in recent years. Due to the lack of MMW images, low resolution and indistinguishable texture in most MMW images, it is still a great challenge to do high performance object detection task on MMW images. In this paper, we propose a novel framework to automatically detect concealed weapons and potential dangerous objects based on a single human millimeter wave image, in which a deep convolutional neural network (CNN) is presented to simultaneously extract features, detect suspicious objects, and give the confidence score. Unlike traditional optical image level solutions, we comprehensively analyze the original MMW data for object representation, incorporate domain-specific knowledge to design and train our network. Moreover, combined with the modern focal loss theory, we devise an effective loss function elaborately to optimize our model. Experimental results on both our dataset and real world data show the effectiveness and improvement of our method compared with the state-of-the-arts.

This paper reviews recent advances in the design of low noise amplifier (LNA) in complementary metal oxide semiconductor (CMOS) technology for radio transceivers at microwave and millimeter wave (mmWave) frequencies. First, the evolution of wireless communication systems and CMOS technology are briefly revisited to highlight the requirements of an LNA design. Then, key performance parameters and device circuit models are described. Next, we discuss typical LNA topologies, followed by those important design techniques, algorithms and concepts developed specifically for CMOS LNAs. Moreover, reported CMOS LNA designs are summarized, and future design issues are identified. Finally, we conclude the paper and briefly outline our future work on CMOS LNA designs.

This paper presents the design and evaluation of a compact antenna system with pattern reconfigurability at 2.6 GHz. The antenna is based on the concept of an electronically steerable parasitic array radiator (ESPAR), and its height is reduced by top loading. The antenna can generate 10 reconfigurable patterns with a maximal gain of 7.4 dBi. Furthermore, a multiple antenna system consisting of these antennas is proposed. The radiation patterns realized by this multiple-input-multiple-output (MIMO) system are optimized for automotive urban scenarios based on the results of previous research. The S-parameter measurement results of a fabricated prototype correlate with the simulation. Furthermore, 3D measurements of radiation patterns correspond very well with simulation and gain up to 8 dBi is obtained. 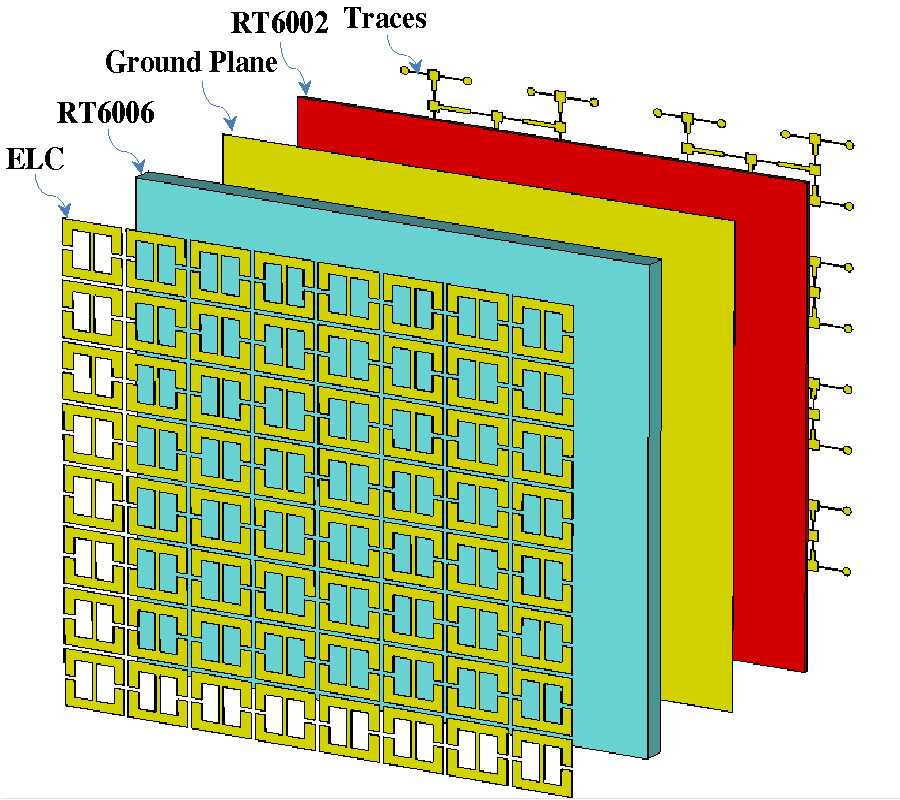 This work presents a design for a metasurface that provides near-unity electromagnetic energy harvesting and RF channeling to a single load. A metasurface and a feeding network were designed to operate at 2.72 GHz to deliver the maximum power to a single load. Numerical simulations show that the metasurface can be highly efficient delivering the maximum captured power to one load using a corporate feed network reaching Radiation-to-RF conversion efficiency as high as 99%. A prototype was fabricated incorporating a rectification circuit. Measurements demonstrated that the proposed metasurface harvester provides Radiation-to-DC conversion efficiency of more than 55%, which is significantly higher than earlier designs reported in the literature.

A fast low-frequency surface integral equation solver based on hierarchical matrix algorithm is proposed. First, the augmented electric field integral equation (A-EFIE) formulation is introduced to eliminate the low-frequency breakdown of traditional EFIE. To deal with large-scale problems, the low-frequency multilevel fast multipole algorithm (LF-MLFMA) is employed to construct a hierarchical (H-) matrix representation of the A-EFIE system matrix. Moreover, a recompression method is developed to further compress the H-matrix generated by LF-MLFMA. The H-matrix-based triangular factorization algorithm can be performed with almost linear computational complexity and memory requirement, which produces a fast direct solver for multiple right-hand-side (RHS) problems, and a good preconditioner to accelerate the convergence rate of an iterative solver. Numerical examples demonstrate the effectiveness of the proposed method for the analysis of various low-frequency problems. 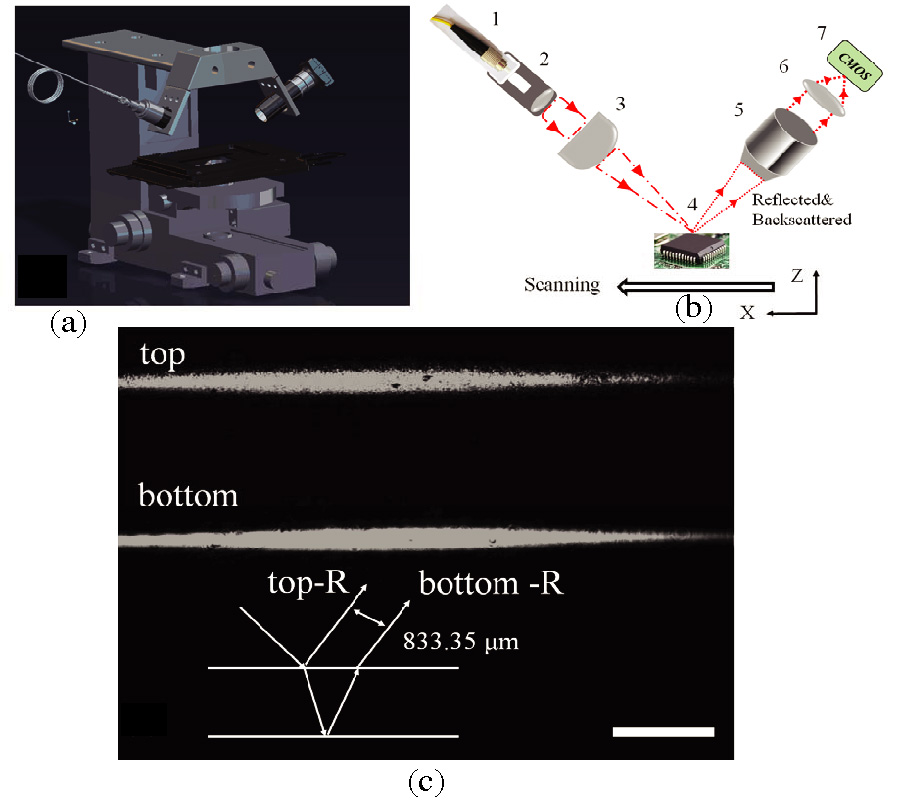 Light-sheet microscopy has attracted considerable attention since it is a fluorescence imaging technique with rapid optical sectioning capabilities for transparent sample. In our study, we report a new application based on light-sheet microscopy for exploratory investigating three-dimensional surface topography of opaque sample. Instead of using inelastic scattering fluorescent signal, our method utilizes the elastic scattering light from the surface of opaque sample, which is illuminated by a light sheet generated by a cylindrical lens. Through a simple structural modification by removing the fluorescent filter, the orthogonally imaging module can capture the elastic scattering image. As the opaque sample is scanned by a motorized stage, the light-sheet microscope acquires a serial of sectional images, which can be stitched to be a three-dimensional surface topography image. This method also offers the opportunity to visualize 3D fingerprint on micron level. Therefore, this technique may be useful in industry and biomedical field for the measurement of surface microstructure.