The ideal ultra-wideband (UWB) antenna feed for lens and reflector systems radiates a uniform and customizable beamwidth vs. frequency. Here, a new antenna concept for radiating frequency-independent Gaussian beams with arbitrary bandwidths and beamwidths is reported. It is analytically shown how to resistively load a transmission line network to maintain a Gaussian amplitude taper across an antenna array aperture. In contrast to many other feed antennas, the radiation properties here can be tailored without time-consuming full wave optimizations. The radiated beamwidth, bandwidth, antenna size, radiation efficiency, and gain can all be quickly estimated using the derived closed-form expressions. An example, 16x16 Vivaldi element array is fed with a network of resistively loaded microstrip lines. The simulated array radiates a Gaussian beam with 10 dB full beamwidth of 35°±5° and directivity of 20 dB±1.5 dB over 6.5 GHz-19 GHz (3:1 bandwidth ratio). However, the radiation efficiency is inherently low due to the large loss associated with generating the Gaussian amplitude taper at all frequencies. The example array has a simulated radiation efficiency of 1% at the higher operating frequencies. The array was fabricated and measured. The measured beamwidths agree well with simulation to validate the reported theory. This architecture is a particularly attractive option for feed antennas that require customizable directivities, and can tolerate low radiation efficiencies such as test and measurement. 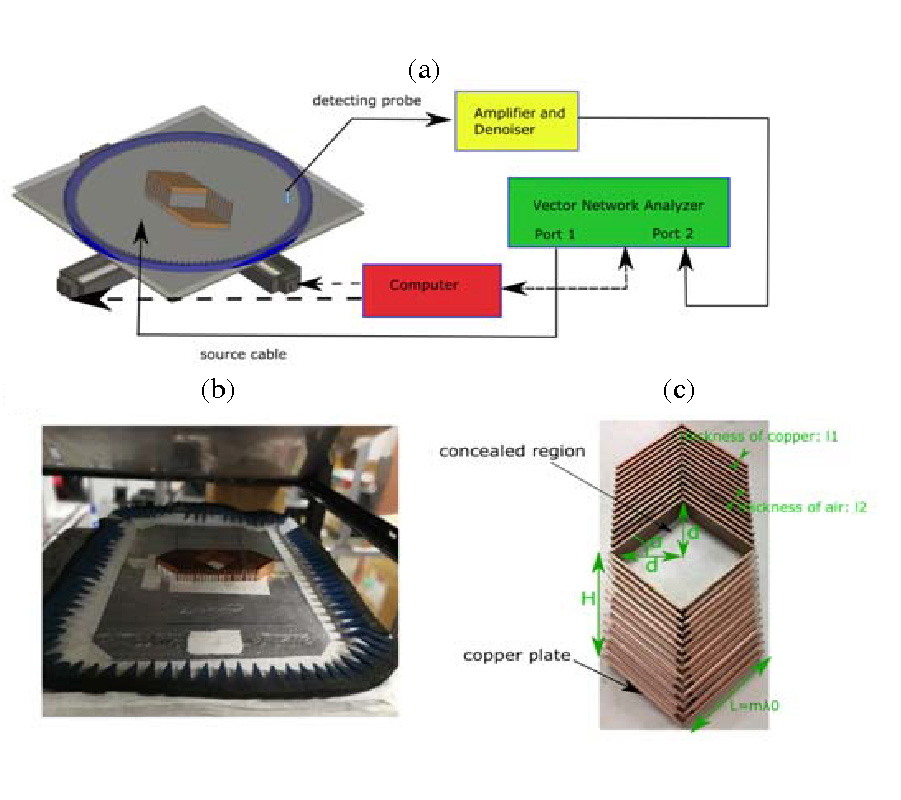 A Camouflage Device Without Metamaterials

We consider the Global Navigation Satellite System Reflectometry (GNSS-R) for land applications. A distinct feature of land is that the topography has multiple elevations. The rms of elevations is in meters causing random phases between different elevations, which affect the coherent wave that has definite phase and the Fresnel zone effects as shown previously by a Kirchhoff numerical simulator (KA simulator). In this paper, we develop a physical patch model that is computationally efficient. The entire area within the footprint is divided intopatches. Each patch is small enough to satisfy the plane wave incidence and is large enough to ignore mutual wave interactions between patches. The bistatic scattering cross section of each patch for the coherent and incoherent field is computed. The bistatic cross section of plane wave incidence is obtained from lookup tables (LUTs) of the numerical 3D solution of Maxwell equations (NMM3D). The SWC represents the summation of weighted coherent fields over patches. The SWICI represents the summation of weighted incoherent intensities over patches. The formula of the received power is the sum of powers from the SWC and SWICI (the SWC/SWICI formula). The weighting factor of each patch is based on thegeometry, spherical waves, and the considerations of field amplitudes and phase variations. We also present an alternative formula, the ``correlation'' formula, using the summation of power from each physicalarea and correlations of SWCs from areas. The SWC/SWICI formula and the ``correlation'' formula are shown analytically to be the same. Results are compared with the KA simulator and two common models (the coherent model and the incoherent model). Results of the patch modelare consistent with the KA simulator. For the simulation cases, the results fall between the coherent model and the incoherent model. The patch model is much more computationally efficient than the KA simulator and the results are more accurate. In examples of this paper, the patch model results are independent of patch size as long as the patch size smaller than 50 m and much larger than the wavelength of GNSS-R frequency. 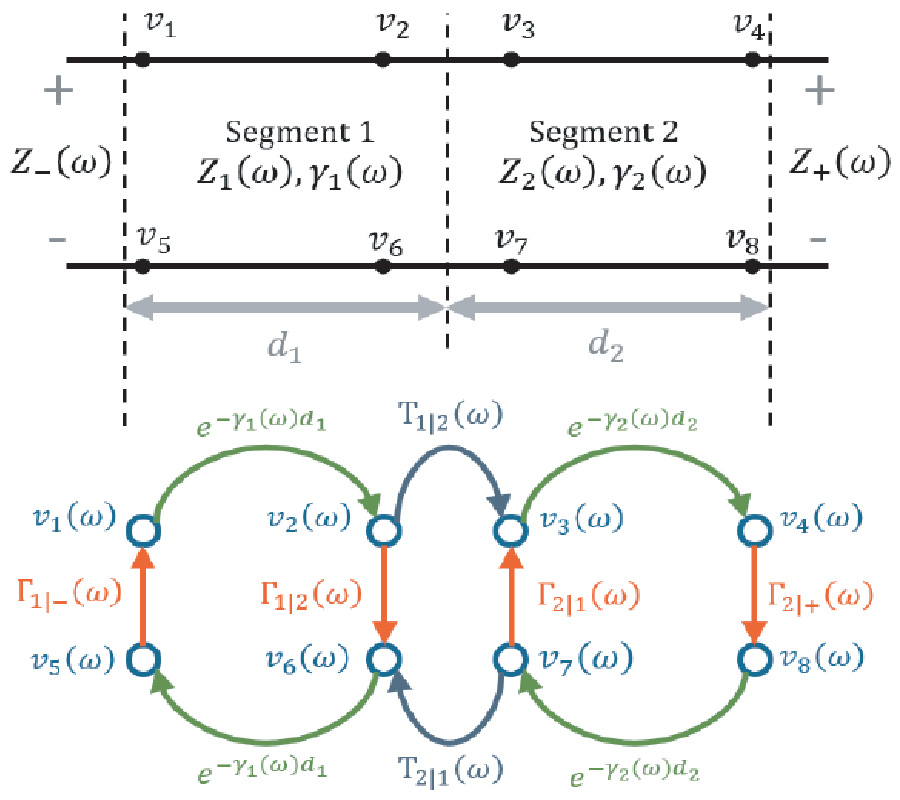 This paper studies a computationally efficient algebraic graph theory engine for simulating time-domain one-dimensional waves in a multi-segment transmission line, such as for reflectometry applications. Efficient simulation of time-domain signals in multi-segment transmission lines is challenging because the number of propagation paths (and therefore the number of operations) increases exponentially with each new interface. We address this challenge through the use of a frequency-domain, algebraic graphical model of wave propagation, which is then converted to the time domain via the Fourier transform. We use this model to achieve an exact, stable, and computationally efficient (O(NQ), where N is the number of segments and Q is the bandwidth) approach for studying one-dimensional wave propagation. Our approach requires the reflection and transmission coefficients for each interface and each segment's complex propagation constant. We compare our simulation results with known analytical solutions.

On the Solution of Inverse Equivalent Surface-Source Problems

Various formulations of the inverse equivalent surface-source problem and corresponding solution approaches are discussed and investigated. Starting from the radiation integrals of electric and magnetic surface current densities, the probe-corrected inverse equivalent source formulation is set up together with different forms of side constraints such as the zero-field or Love condition. The linear systems of equations resulting from the discretized forms of these equations are solved by the normal residual (NR) and normal error (NE) systems of equations. As expected and as demonstrated by the solution of a variety of inverse equivalent surface-source problems, related to synthetic as well as realistic antenna near-field measurement data, it is found that the iterative solution of the NE equations allows for a better control of the solution error and leads in general to a slightly faster convergence. Moreover, the results show that the incorporation of the zero-field condition into the solution process is in general not beneficial, which is also supported by the structure of the NE systems of equations. If desired, Love surface current densities, or just fields in general, can more easily be computed in a post-processing step. The accuracy of the obtained near-fields and far-fields depends more on the stopping criterion of the inverse source solver than on the particular choice of the equivalent surface-source representation, where the zero-field condition may influence the stopping criterion in a rather unpredictable way.

We propose a planar chiral metamaterial (PCMM), which can function as a triple-band polarization angle independent 90° polarization rotator. The unit cell of the PCMM is composed of bi-layered mutual twisted Fermat's spiral structure (FSS) resonators with four-fold rotation symmetry. The simulated and measured results show that the PCMM can work in triple-band and convert a linearly polarized (y-/x-polarized) wave to its cross-polarization (x-/y-polarized) or experience a near 90° polarization rotation with a polarization conversion ratio of over 90%. The electric field and surface current distributions of the unit-cell structure are analyzed to study its physics mechanism. Compared with previous CMM-based rotator, our design has more operation frequencies in a single PCMM structure, a relative thinner thickness, and higher Q-factor. Good performances of the PCMM suggest promising applications in the polarization rotator or convertor that need to be integrated with other compact devices.

In this paper, by applying topological theory, we evaluate some left-handed unit structures. Based on the classification of topological deformation, the laws and characteristics of potential electromagnetic parameters are captured. The original left-handed material unit is realized by using a circular C-shaped coupling ring, the whose whole size is 10 × 10 × 0.5 mm3. Through three kinds of topological deformations, to explore the influence of topology on antenna performance, the electromagnetic parameters and left-handed characteristics of the original and modified units are compared and analyzed. For the designed handshake-shaped unit structure, simulation analysis predicts that dual-frequency, or even multi-band left-handed characteristics, can be achieved. To expand the structural performance of the handshake-shaped unit, an annular line for coupling enhancement is added inside the U-shaped structure to form an integrally coupled annular unit structure. Simulation results show that, with amplitudes of reflection coefficients of -27.1 dB and -14.5 dB, the resonance points of the improved unit structure are 3.57 GHz and 5.64 GHz, respectively. Loading the unit structure with a dual-band left-handed characteristic, a UWB antenna is designed and analyzed in detail. Through simulation, antenna performance is most affected by interference within the range of 2.5 ~ 5.0 GHz, which coincides with the double negative frequency band of the loaded left-handed structural unit. The notch frequency band of the designed UWB antenna, which is much wider than traditional notch antennas, is 3.62 ~ 4.54 GHz, with a notch bandwidth of 920 MHz.

Several computational imaging systems have recently been proposed at microwave and millimeter-wave frequencies enabling a fast and low cost reconstruction of the scattering strength of a scene. The quality of the reconstructed images is directly linked to the degrees of freedom of the system which are the number of uncorrelated radiated patterns that sequentially sample the scene. Frequency diverse antennas such as leaky chaotic cavities and metamaterial apertures take advantage of the spectral decorrelation of transmitted speckle patterns that stems from the reverberation within a medium. We present a reconfigurable chaotic cavity for which the boundary conditions can be tuned by exciting plasma elements, here commercial fluorescent lamps. The interaction of electromagnetic waves with a cold plasma is strongly modified as it is ionized. Instead of being transparent to incident waves, it behaves theoretically as a metallic material. The independent states of the cavity obtained using a differential approach further enhance the degrees of freedom. This relaxes the need of a cavity with a large bandwidth and/or high quality factor. Experimental results validate the use of fluorescent lamps, and its limitations are discussed. Images of various metallic objects are provided to illustrate the potentialities of this promising solution.