We use the three dimensional Finite Difference Time Domain (FDTD) technique to study metamaterials exhibiting both negative permittivity and permeability in certain frequency bands. The structure under study is the well-known periodic arrangement of rods and split-ring resonators, previously used in experimental setups. The three parameters we study are the transmission coefficient of a slab, the phase variation of the propagating fields within the metamaterial, and the refraction of a wave through a prism. To our knowledge, this is the first time that the last two parameters are studied rigorously using a numerical method. The results of this work show that fields propagating inside the metamaterial with a forward power direction exhibit a backward phase velocity and negative index of refraction.

We first consider the mathematical theory of boundaryinitial value problems for Maxwell's equations with as illustration, an extensive discussion of 1D-problems, Then, with the objective to investigate electromagnetic pulse propagation in dispersive media, we analyse how to translate electromagnetic processes which take place in a bounded domain of space-time into a boundary-initial value problem of Maxwell's equations, still focusing on 1D-problems. 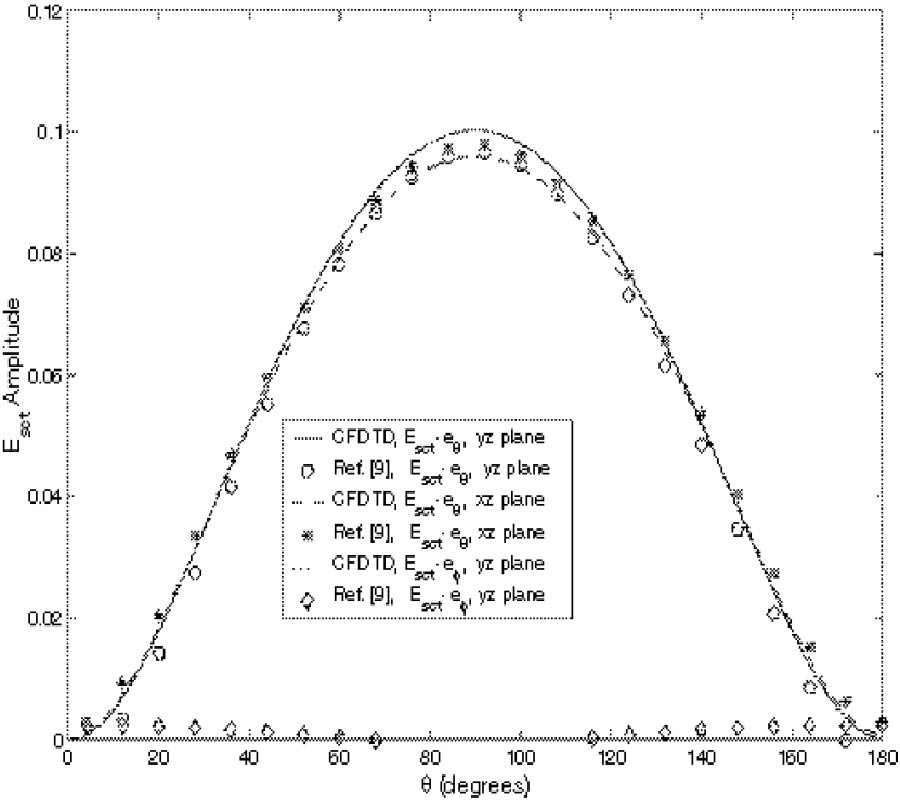 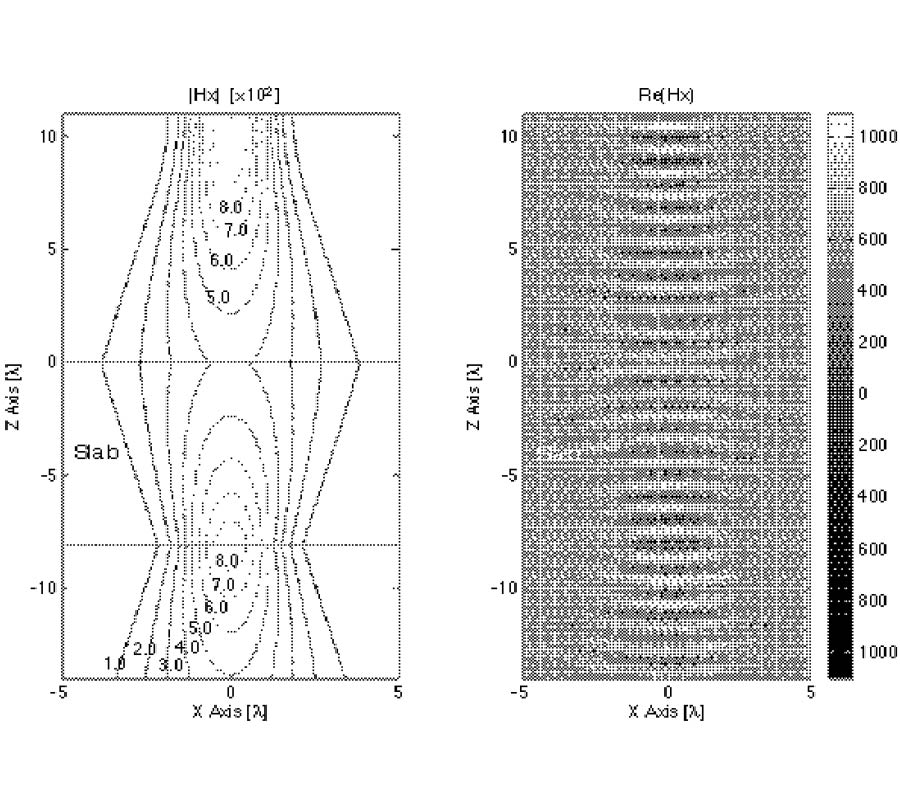 In this paper, we study the electromagnetic fields propagating through a slab which permittivity and permeability are simultaneously negative. We show that symmetry properties of the wave solution remove all ambiguity in the choice of the sign of the wave numbers inside the slab. Upon developing the Green's functions in terms of plane waves, growing "evanescent" waves in the direction of power flow are shown to exist inside the slab. As an illustration, the perfect imaging property of a slab where ²1 = −²0 and μ1 = −μ0 is verified.

The paper suggests a model of dielectric properties of bound water in wet soils. The application of the model to the description of dielectric and radiophysical properties of wet soils in microwave electromagnetic range is considered. The comparisons of theoretical and experimental dielectric constants provided show good reliability of the suggested model. 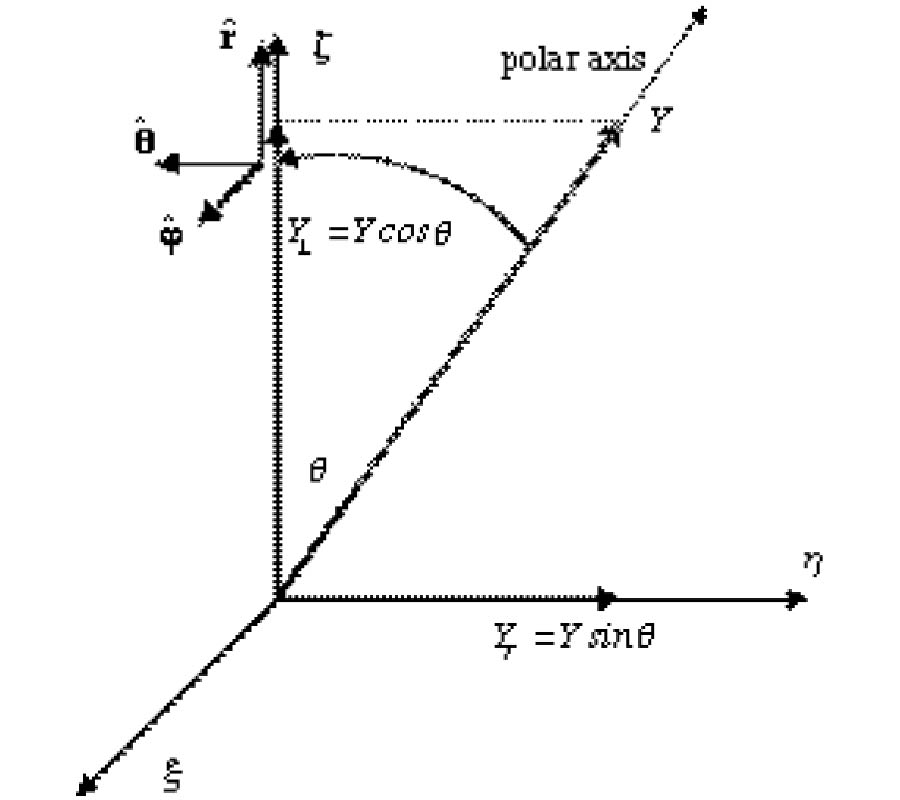 In an attempt to bridge the gap between theory and applications, this paper brings together a few diverse subjects, and presents them as much as possible in self-contained form. A general perturbation method is developed for calculating the first order effects in quite general bi-anisotropic materials. The advantage of this approach is the feasibility of generating solutions of the Maxwell equations for the complicated media, in terms of well-known solutions for simple media. Specifically, the present study was motivated by a need to provide a theoretical framework for polarimetric glucometry methods, presently under investigation, in the hope of gaining better understanding of the systems and their limitations, as well as suggesting new configurations for acquiring better data. To that end, we chose to analyze gyromagnetic effects in lossless magneto-optical systems. Some representative examples have been chosen, and the obtained results, for various situations involving plane and spherical waves, are discussed. It is shown that the specific configuration of the magnetic fields affect the solutions. Generally speaking, the magnetic fields create new multipoles in the resultant wave fields. Another interesting feature of the present approach is the fact that we get the elementary Faraday rotation effect without resorting to a pair of two oppositely oriented circularly polarized waves, as usually done. Consequently we are able to discuss explicitly complicated situations involving non-planar waves and various external magnetic fields. The penalty is of course the restricted validity of the model to small non-isotropic effects. 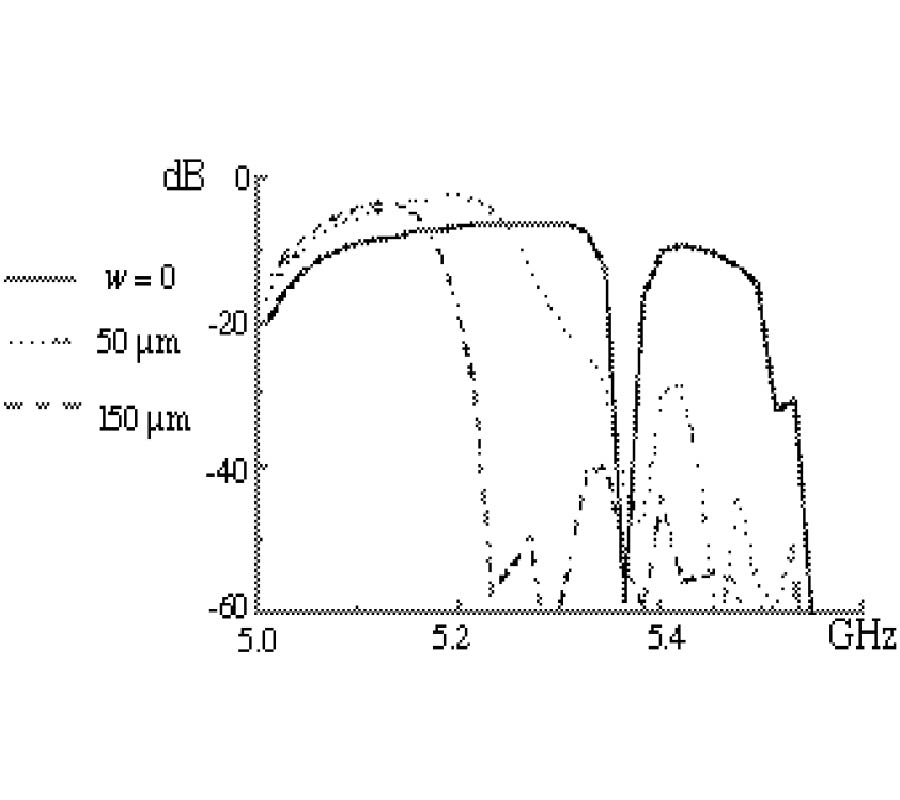 Excitation and Reception of Electromagnetic, Magnetostatic and Spin Waves in Ferrite Films

The paper presents a new universal formulation of electromagnetic fields in microwave ferrite-dielectric waveguiding structures from the given magnetic field distribution of an external source. The solution is derived from the linearized Landau-Lifshits equation using an orthogonality condition for eigenwaves of a magnetization. The magnetization excited in ferrite is obtained in an electrodynamic, magnetostatic or dipole-exchange approximation, depending on the approximation used for eigenwaves. Results are applied for the formulation and the analytical solution of self-consistent electrodynamic problems of an excitation and a reception of waves in ferrite films by transmission lines of an arbitrary type. Numerical calculations are performed for filters and delay lines on the base of symmetric strip-lines using surface and forward volume magnetostatic waves in ferrite films.

In this paper, a spatial-domain Galerkin's procedure in Method of Moments is applied to analyse a cylindrical-rectangular chirostrop antenna. It is assumed that a single-layer chiral substrate is wrap-fabricated around a conducting core-cylinder and that a perfectly conducting and electrically thin rectangular-cylindrical microstrip patch antenna is mounted on the surface of the chiral substrate. By imposing the boundary conditions on the multiple interfaces and applying the scattering superposition method, a complete expression of dyadic Green's functions (DGFs) has been obtained and the current distribution over the cylindrical rectangular chirostrip antenna has been determined. Various radiation patterns due to such a microstrip antenna in the presence of a chiral substrate are obtained and compared with those in the presence of an achiral substrate, so as to gain physical insight into effects of the chirostrip. 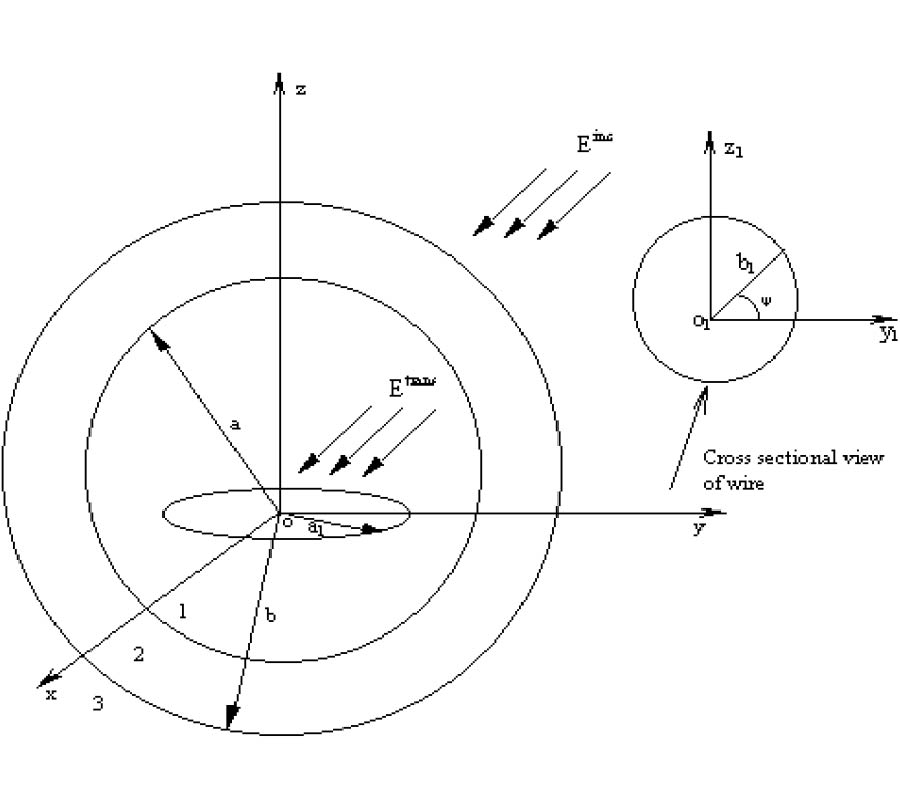 Electromagnetic Scattering of a Thin Circular Loop Enclosed by a Spherical Chiral Radome Shell: a Method of Moments Analysis

In this paper, radiation patterns of a thin circular conducting loop embedded in a two-layered spherical chiral medium but illuminated by a plane wave are obtained. The method of moments is employed in this work to formulate the current distribution along the circular loop enclosed by the spherical chiral radome shell. The dyadic Green's functions defining electromagnetic fields due to sources in both the outer and inner regions are applied. In the Galerkin's procedure for the method of moments, basis functions used in the work are sine and cosine functions which form a Fourier series. The formulation itself here is quite compact, straightforward, and easy-to-use. Effects of various geometrical and dielectric parameters of the chiral radome shell are discussed. As expected, the role of the spherical chiral radome is again realized as a polarization transformer. Associated with these parameters, waves and fields in such an electromagnetic system are characterized. It should pointed that there existed some mistakes in the literature which did not use the correct Green's functions in the method of moments procedure. This paper aims at correcting the mistake and establish a correct concept in the method of moments analysis. 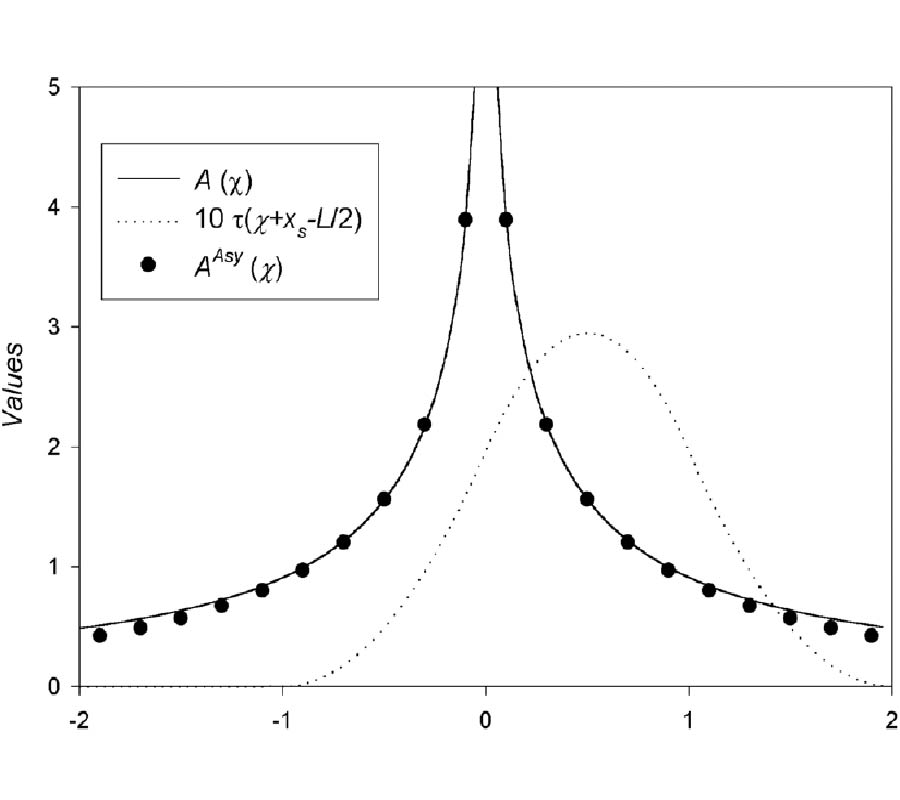 The integral transform method with the asymptotic extraction technique is formulated to evaluate a Sommerfeld type integral for the analysis microstrip dipole on a uniaxial substrate. The infinite double integral of the asymptotic part of the impedance matrix with triangular subdomain basis function with edge condition can be reduced to a finite one-dimensional integral. This finite onedimensional integral can be easily evaluated numerically after the singular part of the integral is treated analytically. It is demonstrated the efficiency and accuracy of the proposed method to evaluate the asymptotic part of impedance matrix.

The dyadic Green's function for an unbounded anisotropic medium is treated analytically in the Fourier domain. The Green's function, which is expressed as a triple Fourier integral, can be next reduced to a double integral by performing the integration over the longitudinal Fourier variable or the transverse Fourier variable. The singular behavior of Green's dyadic is discussed for the general anisotropic case. 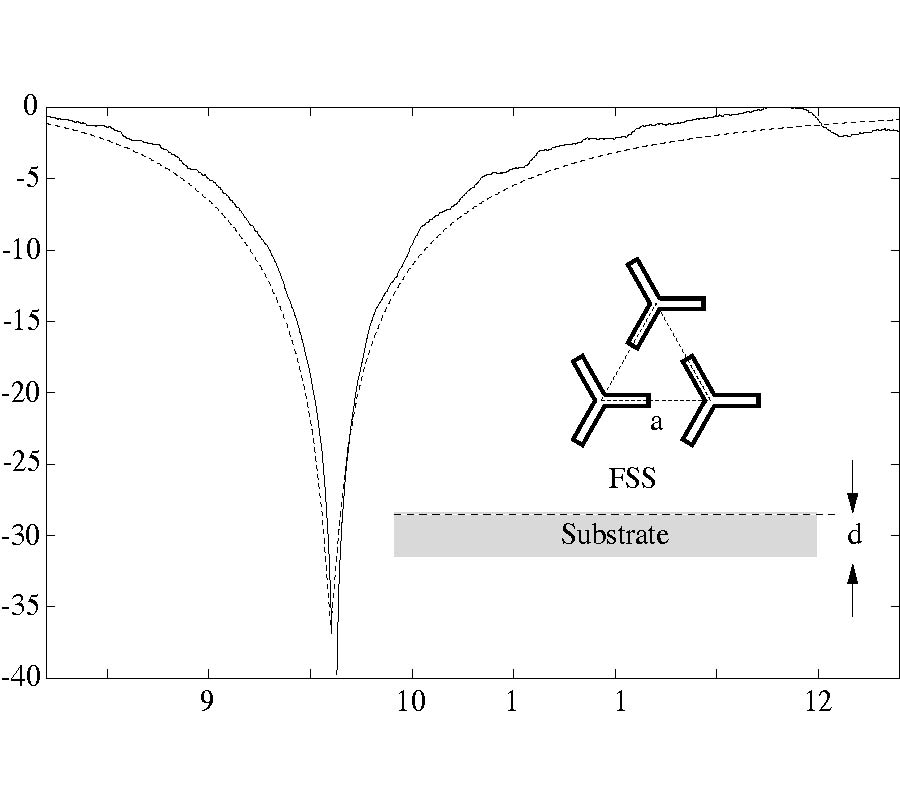 Scattering from a Frequency Selective Surface Supported by a Bianisotropic Substrate

In this paper a method for the analysis of a frequency selective surface (FSS) supported by a bianisotropic substrate is presented. The frequency selective structure is a thin metallic pattern - the actual FSS - on a plane supporting substrate. Integral representations of the fields in combination with the method of moments carried out in the spatial Fourier domain are shown to be a fruitful way of analyzing the problem with a complex substrate. This approach results in a very general formulation in which the supporting substrate can have arbitrary bianisotropic properties. The bianisotropic slab can be homogeneous,stratified, or it can have continuously varying material parameter as a function of depth. The analysis presented in this paper is illustrated in a series of numerical examples. Results for isotropic,anisotropic and bianisotropic substrates are given. 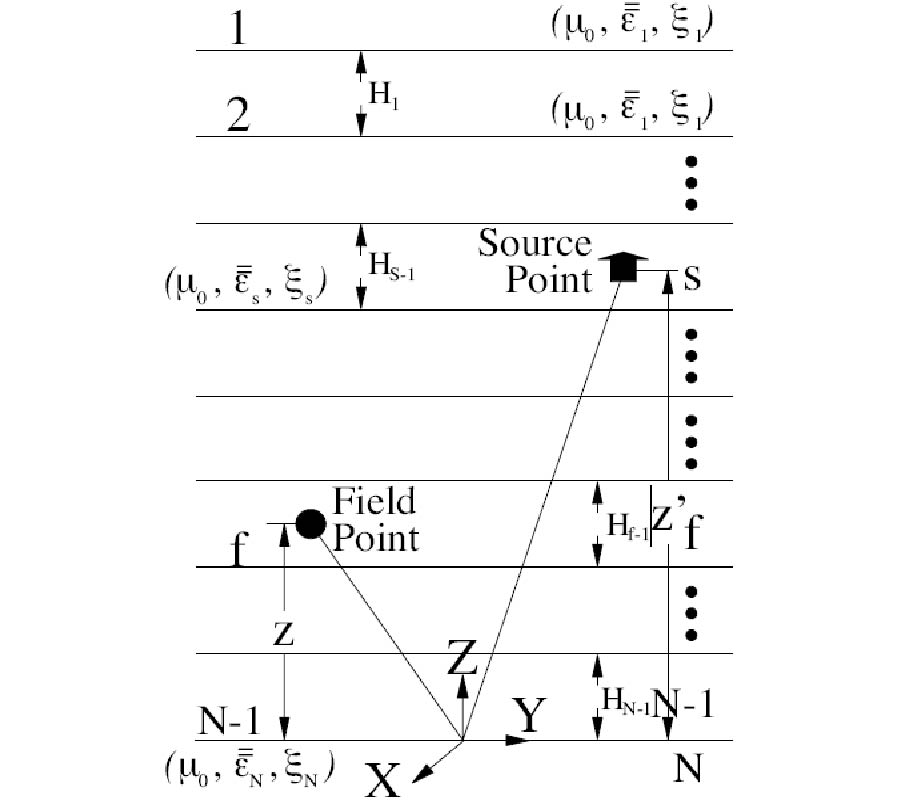 To characterize electromagnetic waves in complex media has been an important topic because of its useful applications and scientific significance of its physical mechanism. Dyadic Green's functions, as a mathematical kernel or a dielectric medium response, relate directly the radiated electromagnetic fields and the source distribution. In terms of the vector wave functions in cylindrical coordinates, dyadic Green's functions in a unbounded and a planar, multilayered gyroelectric chiral media are formulated. By use of the scattering superposition principle and taking the multiple reflections into account, a general representation of the Green's dyadics is obtained. Furthermore, the scattering coefficients of the Green's dyadics are determined from the boundary conditions at each interface and are expressed in a greatly compact form of recurrence matrices. In the formulation of the Green's dyadics and their scattering coefficients, three cases are considered, i.e., the current source is impressed in (1) the first, (2) the intermediate, and (3) the last regions, respectively. Although the dyadic Green's functions for a unbounded gyroelectric chiral medium has been reported in the literature, some of the results are incorrect. As compared to the existing results, the current work basically contributes (1) a correct form of dyadic Green's function for a unbounded gyroelectric chiral medium, (2) the general representation of the dyadic Green's functions for a multi-layered gyroelectric chiral medium, and (3) a convincible and direct derivation of the irrotational Green's dyadic. 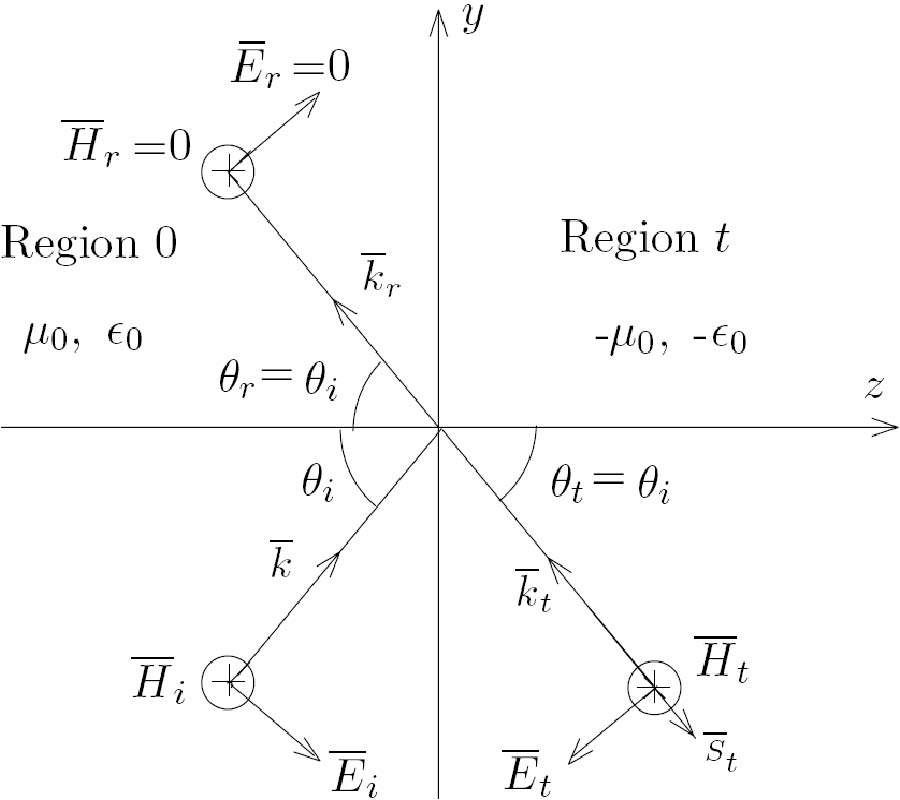