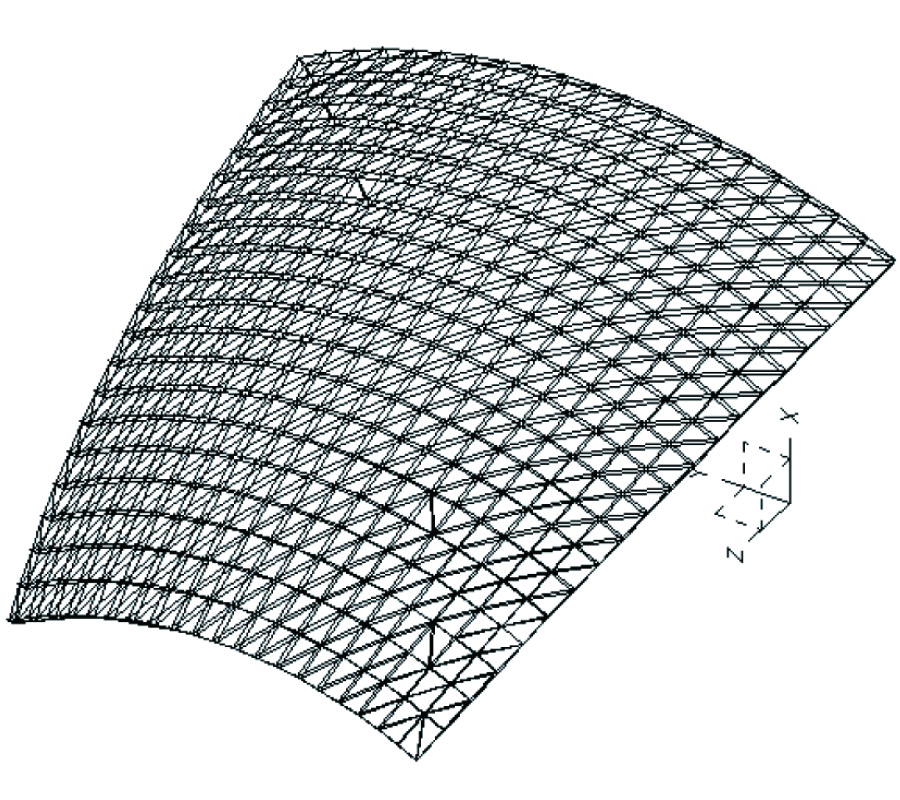 Designers are increasingly integrating conformal microstrip antennas into the curved structures of either air or land vehicles. Quite often, these structures are doubly curved (e.g. curved along two orthogonal surface directions). This practice necessitates the development of accurate codes versatile enough to model conformal antennas with arbitrarily shaped apertures radiating from doubly curved surfaces. Traditional planar-structure-based design techniques are not well suited for this application. A hybrid finite element-boundary integral formulation appropriate for the high-frequency analysis and design of doubly curved conformal antennas is introduced in this paper. The novelty of this approach lies in its use of an asymptotic prolate spheroidal dyadic Green's function to model the physics of curved surface diffraction. To demonstrate the utility of this approach, the effects of curvature on the resonant frequency and input impedance of both a doubly curved conformal square and circular patch antenna are investigated. Different feed positions are also considered. Due to a paucity of published experimental data, the numerical results are benchmarked by comparison with the results for planar square and circular patch antennas. The planar results are obtained by using an experimentally validated planar finite element-boundary integral code.

In this paper, a new computational technique is presented for the first time. In this method, physical differential equations are incorporatedin to interpolations of basic element in finite element methods. This is named physical spline finite element method (PSFEM). Theoretically, the physical spline interpolation introduces many new features. First, physical equations can be usedin the interpolations to make the interpolations problem-associated. The algorithm converges much faster than any general interpolation while keeping the simplicity of the first order Lagrange interpolation. Second, the concept of basis functions may need to be re-examined. Thirdly, basis functions could be complex without simple geometric explanations. The applications to typical one-dimensional electromagnetic problems show the great improvements of the newly developed PSFEM on accuracy, convergence andstabilit y. It can be extendedto other applications. Extension to two- andthree-d imensional problems is briefly discussed in the final section.

A Note on the Backward Scattering Theorem

Recent efforts by C.-T. Tai to emphasize backward scattering within the makeup of the optical theorem are examined here from first principles. The present work exploits spectral field representations and a common asymptotic procedure so as to build up both the scattered fields and their contribution to the extinction integral. The result of all this is to reaffirm the strictly forward scattering nature of the optical theorem as commonly understood, while at the same time reconciling it with a backward scattering interpretation. The backward scattering, it so turns out, is backward in reciprocal space, wherein it affects the Fourier transform of the currents induced throughout the scattering object. The standard forward scattering attribute of the optical theorem, forward in the context of actual space, remains unimpaired. In truth, however, the backward spectral attribute is a mere technical formality, made available for only one of the two signature options which one can exercise when making specific the details of transformation. The alternate signature option leads to a forward appearance in spectral space also, with the actual value of the current transform appearing in the optical theorem quite intact. We develop these results in detail and then, for completeness, summarize the special form which they adopt for scattering obstacles with axial symmetry. 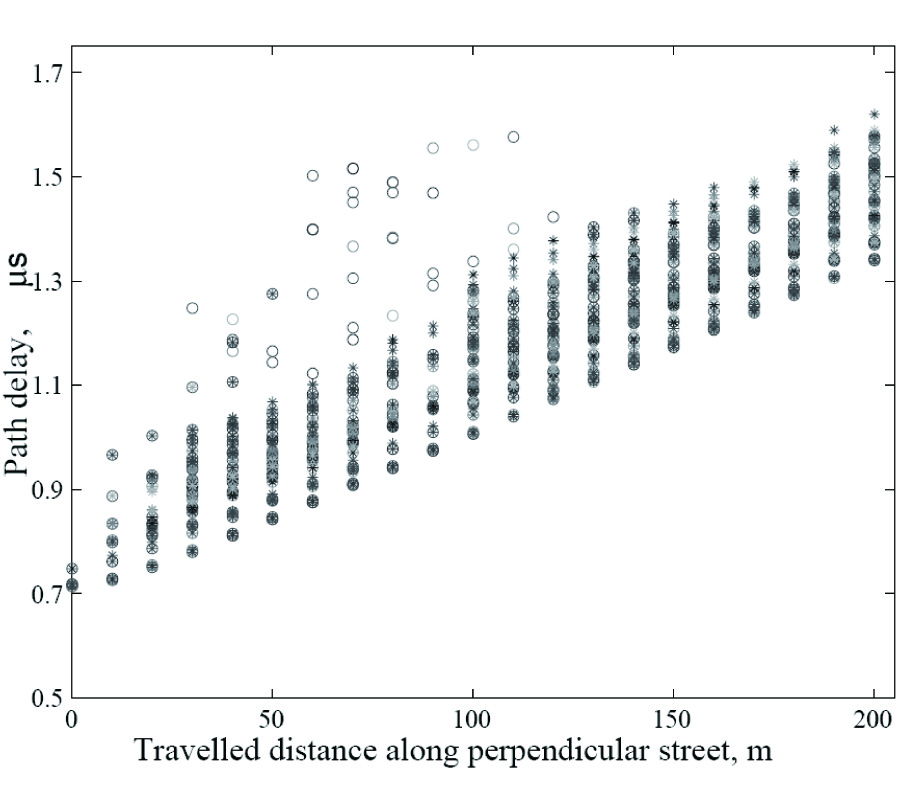 This paper proposes a spatial variant wideband propagation model for perpendicular street of urban street grid. Analytical expression of the spatial variant multi-ray channel transfer function is derived. The model provides characteristics of each ray in explicit expressions. The ray characteristics are given in terms of complex amplitude for both vertical and horizontal polarizations, path length, angle of arrival and departure. A set membership criteria is proposed to determine the coupling radio paths. The proposed model is not only capable in providing macroscopic quantities like mean field values and mean delay spread, but also the full wideband channel information, i.e., space dependent complex channel responses with a high time dispersion resolution. The proposed model can be used for studying different propagation problems in urban street grid for microcellular communications with applications e.g., antenna diversity techniques, multi-input multi-output (MIMO) channel capacity analysis, etc. 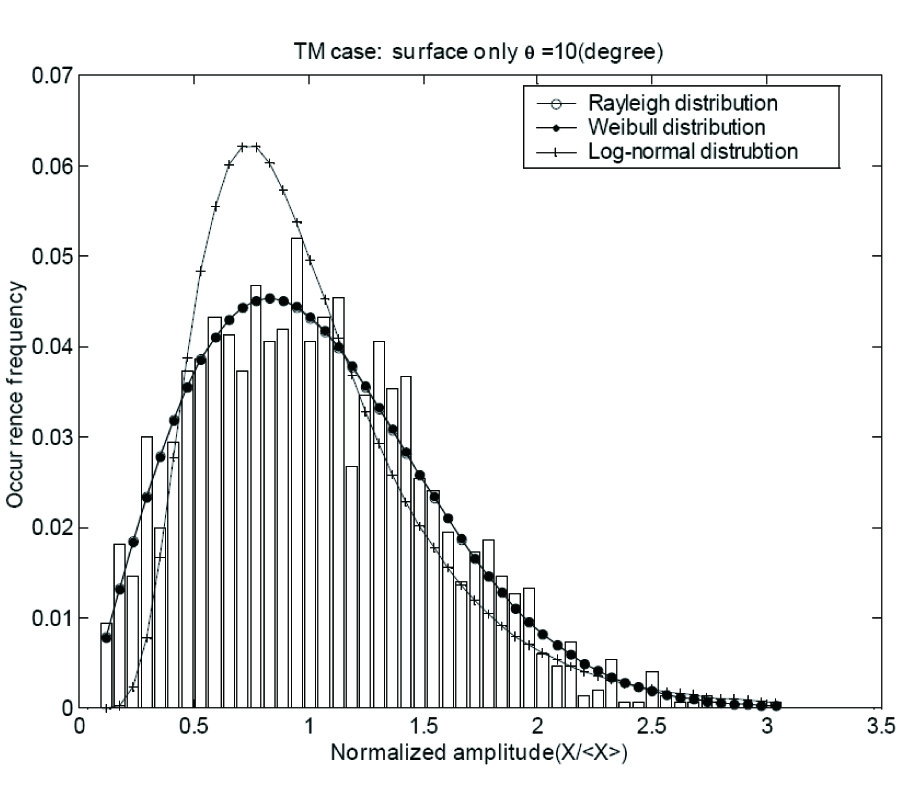 Electromagnetic Scattering from a Circular Target Above OR Below Rough Surface

The electromagnetic scattering from a perfectly electric conducting (PEC) target located above or below rough surface is investigated, for the case of TM polarization, using the Method of Moments (MoM). The rough surface with Gaussian profile is used to emulate the realistic situation of a statistically-rough surface, while the tapered incident wave is chosen to reduce the truncation error. The Monte-Carlo procedure is employed to calculate the angular correlation function (ACF), which is dependent on the depth, size and horizontal position of the buried target, as well as the moisture content in the soil, and the properties of the rough surface. The enhancement of the ACF on the non-memory line can be used to detect a target below the rough surface. The analysis on the statistical characteristics is also carried out, in view of the study on target detection. 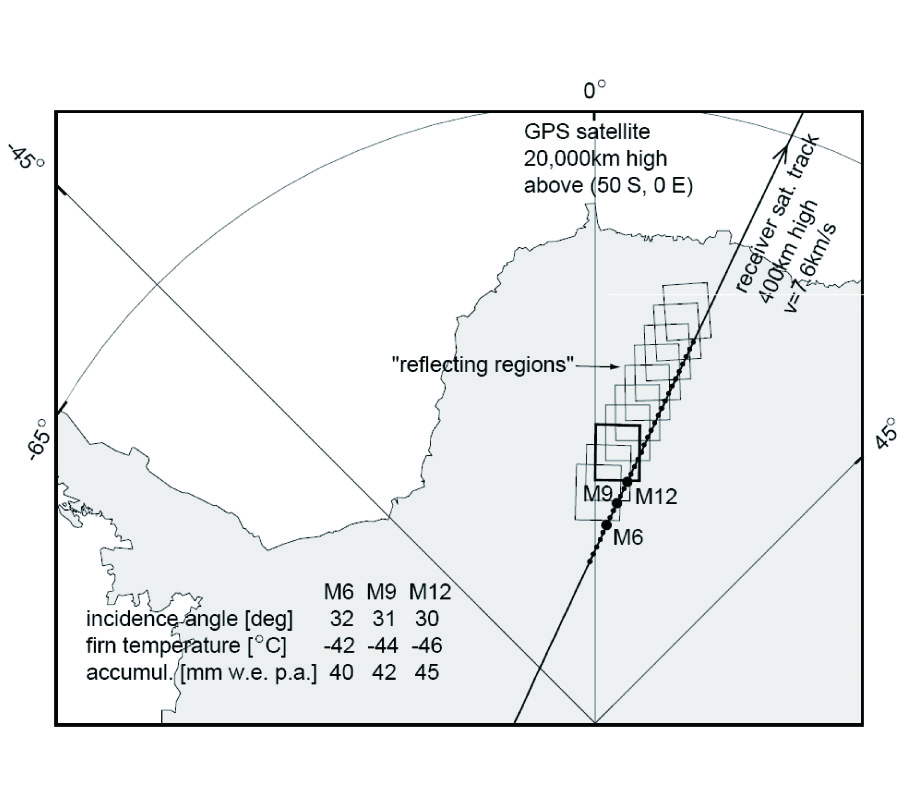 Martin Wiehl and B. Legresy

Earth-reflected GNSS (Global Navigation Satellite System) signals have become an attractive tool for remote sensing, e.g., ocean altimetry and scatterometric ocean wind measurements. For ice sheets, the large penetration capability and the large-scale surface averaging of the L-band signals could open a new look on firnpack characteristics like accumulation rates. In this paper we investigate theoretically reflections of GPS (Global Positioning System) signals from ice sheets. We derive a model of the reflection signal and perform simulations of airborne and spaceborne measurements. The results show that the signal, though complex, is sensitive to the roughness of the snow surface (and internal interfaces) and to firn parameters like accumulation rates. To extract valuable and concise information from the complex signal, we derive an example procedure that focusses on particular ground zones during a satellite receiver pass. The results indicate that it should be possible in principle to separately infer surface and firnpack parameters from the measurements. We conclude that GNSS reflections over ice sheets should be further persued, in particular by obtaining experimental data. 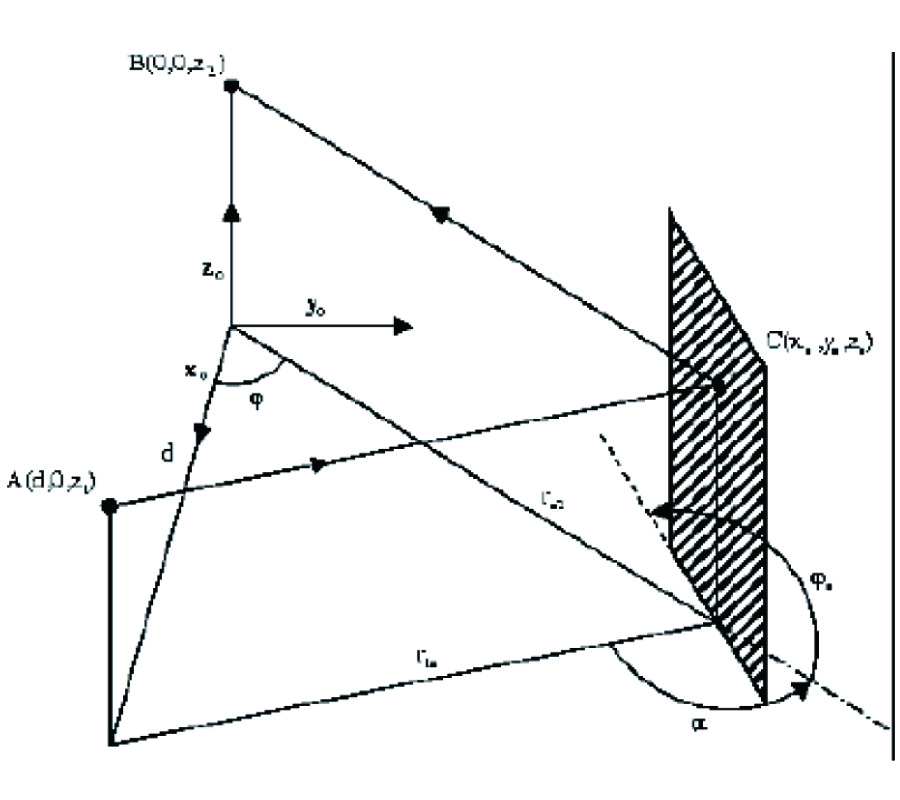 In this paper we describe radio wave propagation within mixed residential area consisting of vegetation and houses. We assume no specific knowledge of the houses and vegetation location,but only of their statistical parameters. A three-dimensional (3D) stochastic approach,whic h is based on the statistical description of the terrain features,houses and vegetation,and deterministic description of signal decay is presented. The scattering and diffraction from trees and buildings,as well as the diffused reflection from the rough structures of the obstructions are modeled using the statistical description of an array of non-transparent phase screens randomly distributed on the rough terrain. The model,whic h accounts for single scattering and diffraction phenomena and a similar model,whic h accounts for multiple scattering effects without effects of diffraction are compared with measurements carried out in typical rural mixed residential areas with vegetation. The accuracy of the theoretical prediction is analyzed accounting possible variations of the terrain features. The approach presented here is applicable in many cases,where specific topographical information is not available.

A simple and direct method to the problem of twodimensional electromagnetic scattering from a dielectric cylinder with multiple eccentric cylindrical inclusions is proposed. The method is based on the T-matrix approach. An aggregate T-matrix of the external cylinder for TM-wave and TE-wave excitations is derived in terms of the T-matrices of individual cylinders isolated in the host medium. The backscattering and differential scattering crosssections of the host cylinder are easily obtained by matrix calculations for the aggregate T-matrix. Numerical investigation is presented for the case where all cylinders have circular cross-sections. Numerical examples for up to three inclusions demonstrate that the scattering characteristics are significantly influenced by the internal asymmetry and inhomogeneity pertinent to the locations and material of the inclusions. 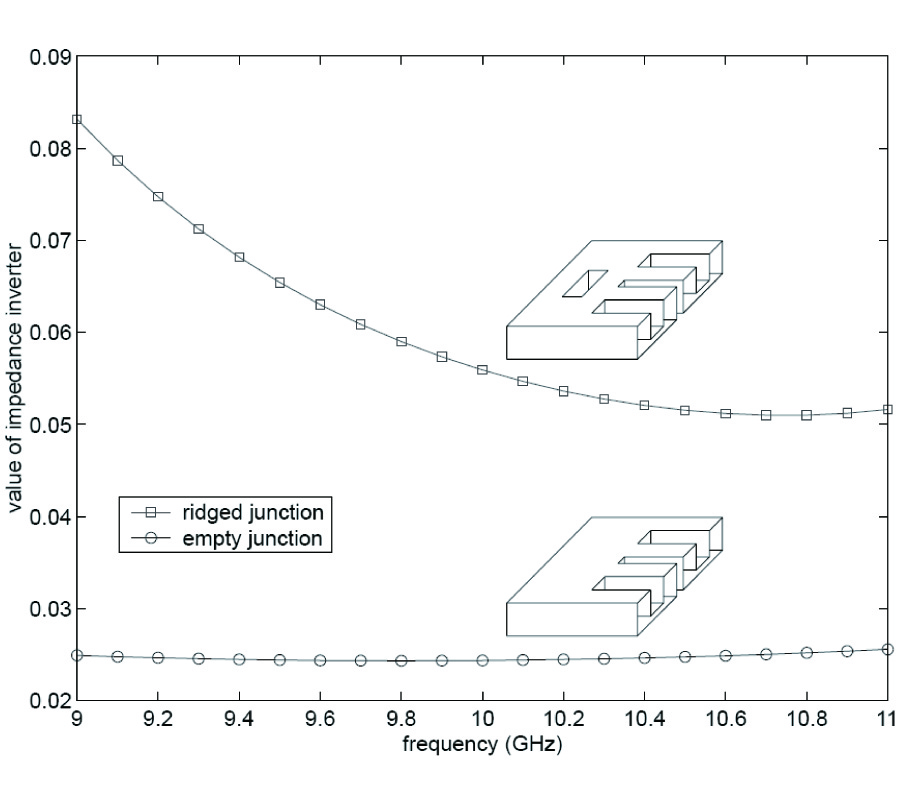 Starting from a continuous plane-wave representation of the electric and magnetic fields, spatial auto- and cross-correlation functions for field components and their modulus are derived in the three-dimensional Rayleigh channel case. It is shown that existing results, generally relying on two-dimensional or isotropic models, can significantly differ from those obtained thanks to a three-dimensional approach.

Full wave optimization is implemented to design a wide band transition from shielded stripline to ridge waveguide. A bandpass ridge waveguide filter, with input/output realized through tapped-in stripline is designed. Using rigorous mode matching technique the generalized scattering matrices of all the building blocks are obtained. Design procedure is described and examples are given to demonstrate the features of the tapped-in coupling structure. The tapped-in structure results in a considerable reduction of the filter's total length compared to the use of two transitions.

The usual aim with any waveguide is to operate it with only the fundamental mode propagating. With fully closed waveguides, finding the band over which this is possible turns on no more than knowledge of the cutoff frequencies of the fundamental and first higher order modes. With open waveguides, the question is not so simply answered. Such waveguides propagate at most a finite set of bound modes together with a continuous modal spectrum that has no counterpart with closed guides. In this paper, for several particular two-conductor transmission lines, we investigate the circumstances under which leaky wave modes, though not themselves members of any orthonormal set of basis functions, can be used to set bounds on the band over which it is to be expected that the transmitted field is substantially contained in the fundamental TEM mode. The method used relies on transverse resonance.