The electric field integral equation (EFIE) with the method of moments (MoM) is used for treating problems of a thin wire antenna in the presence of a conducting cube. Pulse-expansion and point-matching technique in MoM are applied to both thin wire and closed object. For simplicity and efficiency, hybrid method for calculating near field and more importantly the surface field of objects is presented. Several examples in this paper show the validity of the proposed pulse-expansion and point-matching technique and the simplified hybrid calculation method.

In this paper, we analyze the transient electromagnetic response from three-dimensional (3-D) dielectric bodies using a time domain PMCHW (Poggio, Miller, Chang, Harrington, Wu) integral equation. The solution method in this paper is based on the Galerkin's method that involves separate spatial and temporal testing procedures. Triangular patch basis functions are used for spatial expansion and testing functions for arbitrarily shaped 3-D dielectric structures. The time domain unknown coefficients of the equivalent electric and magnetic currents are approximated by a set of orthonormal basis functions that are derived from the Laguerre functions. These basis functions are also used as the temporal testing. Use of the Laguerre polynomials as expansion functions characterizing the time variable enables one to handle the time derivative terms in the integral equation and decouples the space-time continuum in an analytic fashion. We also propose an alternative formulation using a differential form of time domain PMCHW equation with a different expansion for the equivalent currents. Numerical results computed by the two proposed methods are presented and compared. 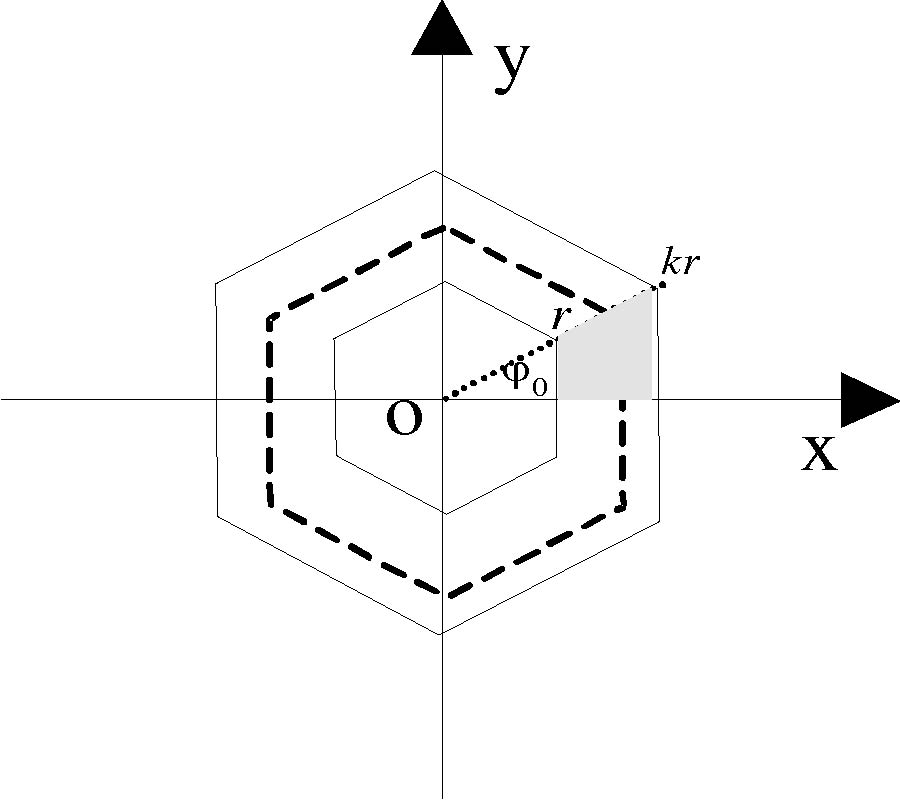 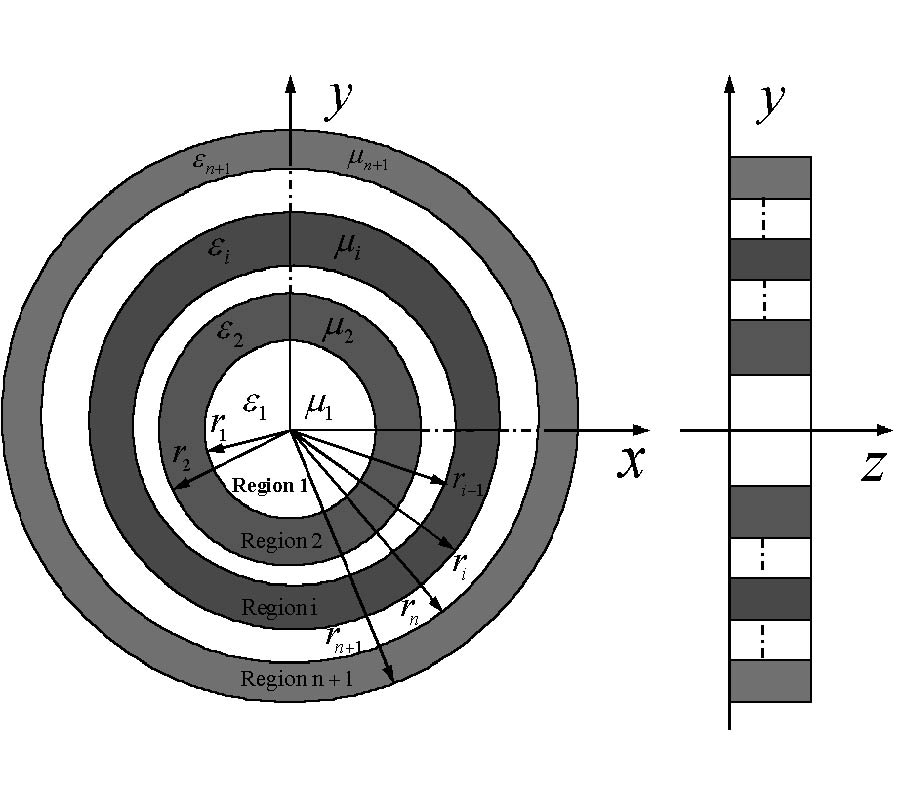 In this paper is presenteda methodfor computing, andan experimental procedure for verifying, the coupling of a signal, caused by a modulatedlaser beam, to a loadimp edance terminating a coaxial waveguide whose center conductor protrudes into a an open-ended body of revolution (BOR). The excitation is the signal radiated by electrons emittedfrom the conducting surface by an impinging laser beam, modulated in such a way that the electrons escaping the surface oscillate harmonically in time causing them to radiate a coherent signal at an angular frequency Ï‰. For a vanishingly small spot of laser light on the conducting surface, the radiating source is modeled as an electric dipole normal to and located at the surface. To perform this computation directly is very difficult so we resort to an indirect methodthat allows us to realize significant savings with no loss in generality. The indirect approach adopted here takes the advantage of the reciprocity andallo ws one to determine the receivedsignal at the coax terminal load from knowledge of the field radiated by a small wire probe mounted on the symmetry axis of the BOR under the condition that the excitation results from a current generator impressedat the terminal endof the coax. This scheme necessitates the formulation andsolution of a simpler integral equation. In principle, the approach developed to solve this problem is exact and rigorous. The validity of this approach is demonstrated numerically and experimentally.

Wave Propagation and Reflection in the Ionosphere. an Alternative Approach for Ray Path Calculations

In this work,the ray trajectory for oblique incidence is determined by solving the wave equation using the Finite Element Method (FEM). In case of ionospheric reflection the Discrete Fourier Transform (DFT), applied here in the space domain, is used to discriminate the incident and reflected waves. Ray tracing equations are combined with the Poynting vector components in order to calculate the wave trajectory taking into account the Earth's curvature. The results are illustrated for different frequencies and angles of incidence using electron density profiles obtained from the Rome digisonde station,topside profiles from the IRI-95 model and atmospheric data from the MSIS-E-90 model of NSSDC as an inputs.

Non-Relativistic Boundary Conditions and Scattering in the Presence of Arbitrarily Moving Media and Objects: Cylindrical Problems

Recently non-relativistic boundary conditions, based on the Lorentz force formulas, have been investigated. It was shown that to the first order in the relative velocity v/c the results for scattering problems are in agreement with the exact relativistic formalism. Examples for scattering by material objects moving in free space have been discussed. Presently the feasibility of non-relativistically solving scattering problems involving arbitrary material media is investigated. For concreteness, two representative canonical problems were chosen: scattering by a uniformly moving circular cylinder, and the related problem of a cylinder at rest, comprised of a uniformly moving medium in the cylindrical cross-sectional plane. The investigation demonstrates that solving such problems is feasible, and indicates the complexity involved in such an analysis. The main highlights are that we need to evaluate the phases and amplitudes of waves at the scatterer's surface, employing formulas based on the Lorentz force formulas and the Fresnel drag concept. The explicit solutions for the scattering problem display velocity-dependent interaction of the scattering coefficients. 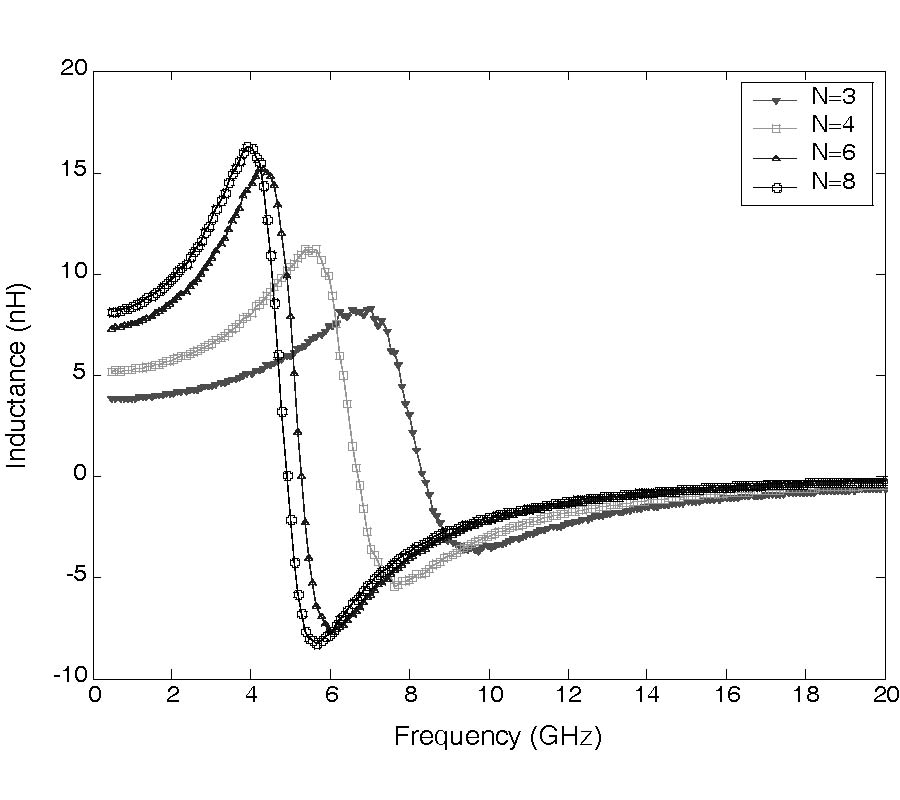 Abstract-Performance trends varying with different geometrical parameters for on-chip spiral inductors: (a) with fixed inner-dimension, (b) with outer-dimension, and (c) variation in both inner- and outerdimensions are extensively investigated in this paper. The relationships for the inductance, Q-factor and self-resonance frequency (SRF) with various geometrical parameters, such as track width, track spacing, and turn numbers are examined on an extensive experiment basis. These performance trends can be a good guideline for practical inductor designs in RFICs.

Electromagnetic Field in the Presence of a Three-Layered Spherical Region

The plane wave diffraction by a terminated semi infinite parallel-plate waveguide with two-layer material loading and impedance boundaries is rigorously analyzed for E polarization using the Wiener-Hopf technique. Introducing the Fourier transform for the scattered field and applying boundary conditions in the transform domain, the problem is formulated in terms of the simultaneous Wiener-Hopf equations, which are solved via the factorization and decomposition procedure. The scattered field is evaluated by taking the inverse Fourier transform and applying the saddle point method. The numerical examples of the radar cross section (RCS) are represented for various physical parameters and backscattering characteristics, of considered geometry for open ended cavity and discussed in detail.

The scattering by an anisotropic impedance interior rightangled wedge is analyzed when the principal anisotropy directions on the two faces are parallel and perpendicular to the edge. The problem is first approached by directly applying geometrical optics (GO); this allows us to identify the conditions under which the edge diffracted contribution vanishes. For those configurations not satisfying the above conditions, a perturbative technique, based on the Sommerfeld-Maliuzhinets method, is developed to determine an approximate edge diffracted field solution, valid when the normalized surface impedances on the anisotropic faces assume small values. The perturbative corrections to the field are asymptotically evaluated in the context of the Uniform Geometrical Theory of Diffraction (UTD).

A matched triaxial device is designed and constructed to measure the transfer impedance of braided coaxial cables at UHF frequencies. Full design principles of the device have been theoretically developed and the details were given in the paper. The device is particularly suited for accurate measurements of transfer impedances at higher radio frequencies up to 3.8 GHz, for which no comparable technique exists. The performance of the device is evaluated by comparing the results against those obtained from low frequency IEC's triple coaxial apparatus and those obtained by using well known theoretical models.

Scattering ofelectromagnetic waves from a groove in an infinite conducting plane is studied using the Coifman wavelets (Coiflets) under the integral equation formulation. The induced current is expressed in terms ofthe known Kirchhoff solution plus a localized correction current in the vicinity ofthe groove. The Galerkin procedure is implemented, employing the Coiflets as expansion and testing functions to find the correction current numerically. Owing to the vanishing moments, the Coiflets lead to a one-point quadrature formula in O(h5), which reduces the computational effort in filling the impedance matrix entries. The resulting matrix is sparse, which is desirable for iterative algorithms. Numerical results show that the new method is 2 to 5 times faster than the pulse based method of moments.