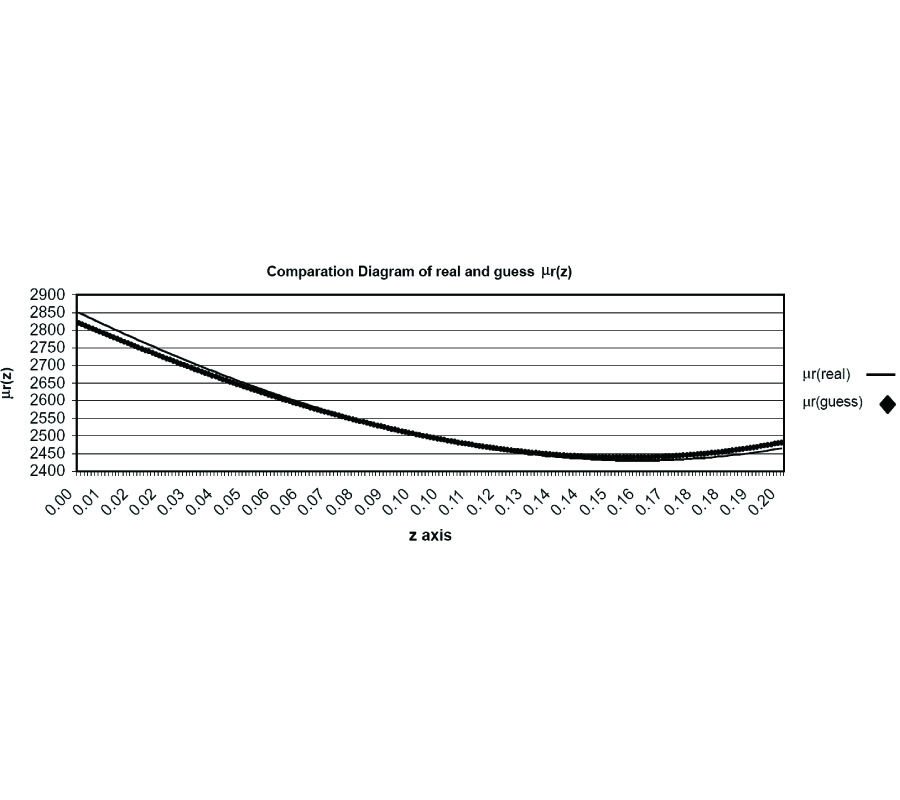 In this paper we study the electromagnetic (EM) wave propagation in a perfect magnetic medium with continuously varying magnetic permeability m(z) in one direction. We consider the inhomogeneity to be arbitrary and described by an infinite power series of z and use the Frobenious method to solve the governing differential equation of the problem in the frequency domain. We also give special attention to the first cut-off frequency of the main mode TM11 and we propose a good estimation for it by means of the mean value of the magnetic permeability profile. The results from the mathematical analysis are applied to solve the direct problem of wave propagation in a system of three waveguides having two homogeneous filling materials and one that exhibits such inhomogeneous characteristics. We finally confront the inverse problem of magnetic permeability reconstruction by handling simulation data and a genetic optimization algorithm.

In this paper, we developed a general framework for the inversion of electromagnetic measurements in cases where parametrization of the unknown configuration is possible. Due to the ill-posed nature of this nonlinear inverse scattering problem, this parametrization approach is needed when the available measurement data are limited and measurements are only carried out from limited transmitter-receiver positions (limited data diversity). By carrying out this parametrization, the number of unknown model parameters that need to be inverted is manageable. Hence the Newton based approach can advantageously be used over gradient-based approaches. In order to guarantee an error reduction of the optimization process, the iterative step is adjusted using a line search algorithm. Further unlike the most available Newton-based approaches available in the literature, we enhanced the Newton based approaches presented in this paper by constraining the inverted model parameters with nonlinear transformation. This constrain forces the reconstruction of the unknown model parameters to lie within their physical bounds. In order to deal with cases where the measurements are redundant or lacking sensitivity to certain model parameters causing non-uniqueness of solution, the cost function to be minimized is regularized by adding a penalty term. One of the crucial aspects of this approach is how to determine the regularization parameter determining the relative importance of the misfit between the measured and predicted data and the penalty term. We reviewed different approaches to determine this parameter and proposed a robust and simple way of choosing this regularization parameter with aid of recently developed multiplicative regularization analysis. By combining all the techniques mentioned above we arrive at an effective and robust parametric algorithm. As numerical examples we present results of electromagnetic inversion at induction frequency in the deviated borehole configuration.

Rigorous and fast convergent analysis of a coupler slotted in common wall between two dissimilar rectangular waveguides is described by a mode-matching method combined with Fourier transform technique and consideration of the singularity of electromagnetic field around edges. Comparing with a conventional mode-matching method, the present method has two advantages. One is that it can avoid the usage of the dyadic Green's function, the other is that it can overcome the relative convergence problem. The consideration of the field singularity has greatly improved the convergence and the calculated accuracy of a solution. This analysis is rigorous and the computer cost is very low.

The Integral Equation Method (IEM) isapplied for about ten years to model the surface scattering phenomenon. Recently, Fung published in [1] an extra improved version of the IEM model. In thispap er, numerical and experimental validationsof the model are investigated. In backscattering, as in bistatic scattering, number of numerical validationsare made on a wide frequency band, by comparing IEM predictionswith a reference method results(Method of Moments). IEM results are also compared with those of some asymptotic models such as Small Perturbation Method (SPM) and Kirchhoff Model (KM) in the frequency domainswhere these latter are applicable. The improved model validation isac hieved by presenting confrontations of the simulation results with experimental data, some of them have been collected in appropriate papers, and the others come from experimentsw e conducted at the ElectroMagnetism and Radar Department (DEMR) of the Office National d'Etudes et de Recherches AÃ©rospatiales (ONERA)-Toulouse (France).

The generalized system function, H(s), directly associated with the radiated or scattered fields is presented in this paper, which is constructed by applying the model-based parameter estimation (MBPE) technique combined with the complex frequency theory. A complex frequency ω̃ relating the real resonant frequency with radiated or scattered Q factor is introduced to antenna and scattering systems. By analyzing the characteristics of complex poles and zeros of H(s) in a finite operational frequency band, and combining with adaptability of MBPE, we can determine the resonant frequency and Q-value of the antenna and scattering systems effectively. The intensity of resonance can be estimated in terms of Q-value and residues at the complex resonant frequencies. Some examples of the practical antenna arrays and scattering systems are given to illustrate the application and validity of the proposed approach in this paper.

This paper presents the adaptive integral method (AIM) utilized to solve scattering problem of mixed dielectric/conducting objects. The scattering problem is formulated using the Poggio-Miller- Chang-Harrington-Wu-Tsai (PMCHWT) formulation and the electric field integral equation approach for the dielectric and conducting bodies, respectively. The integral equations solved using these approaches can eliminate the interior resonance of dielectric bodies and produce accurate results. The method of moments (MoM) is applied to discretize the integral equations and the resultant matrix system is solved by an iterative solver. The AIM is used then to reduce the memory requirement for storage and to speed up the matrix-vector multiplication in the iterative solver. Numerical results are finally presented to demonstrate the accuracy and efficiency of the technique.

Achieving a high stability of the phase centre position in horn antennas with respect to frequency is a very desirable aim in reflector antenna design; a highly stable phase centre reduces efficiency dropping for defocusing at the frequency band extremes. By using an appropriate profile for the horn antenna it is possible to obtain horns both compact and with a stable phase centre. In this paper an automatic design procedure, based on Genetic Algorithms, to obtain such horns is described. The algorithm operates on many horn profile parameters, including corrugations, and is based on an accurate fullwave mode matching/combined field integral equation analysis code. To keep computing time down a full parallel algorithm over a 12 CPU parallel virtual machine is described.

A system consisting of a smart antenna and a processor can perform filtering in both the time and space domain,th us reducing the sensitivity of the receiver to interfering directional noise sources. Smart antennas can be used for further increase in the capacity of a communication system and for variable speed of transmission for multimedia information. Switched beam antenna arrays are a subset of smart antennas that cover either the x-y plane or a portion of it with multiple radiation patterns. A processor can decide which pattern to use for reception or transmission. In this paper the use of genetic algorithms (GAs) is examined in the design of switched beam antenna arrays. The antenna consists of five or six elements and the radiation patterns vary from 4 to 8, covering the x-y plane with the main beams of the radiation patterns pointing at 0°, 90°, 180°, 270° and 0°, 45°, 90°, 135°, 180°, 225°, 270°, 315° respectively. The positions of the antenna elements are either chosen exclusively by the GA or are assumed to form a circular array with one central element and the GA decides for the radius and the offset angle of the circle. Furthermore, the GA is asked to design an array covering the first 120° of the x-y plane with 4 radiation patterns pointing at 15°, 45°, 75° and 105°. Such a configuration can be used in sector antennas,whic h are widely used in 2G mobile communication systems. 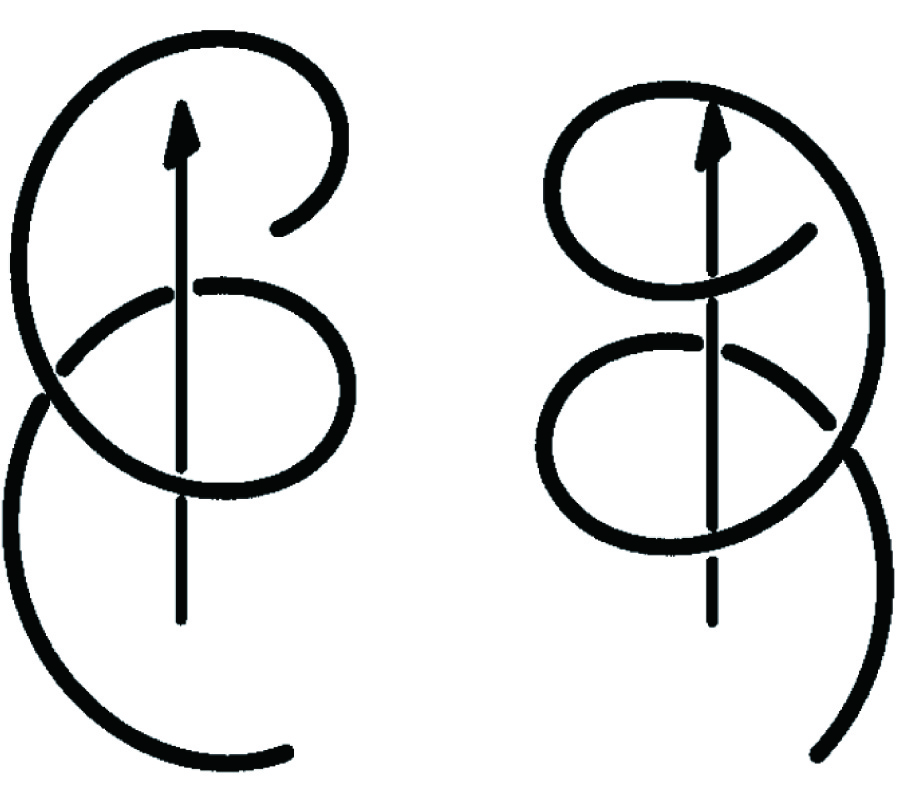 In the first part of this work we show that, by working in Fourier space, the Bohren decomposition and the Helmholtz's decomposition can be combined into one decomposition. This yields a completely mathematical decomposition, which decomposes an arbitrary vector field on â„œ3 into three components. A key property of the decomposition is that it commutes both with the curl operator and with the time derivative. We can therefore apply this decomposition to Maxwell's equations without assuming anything about the media. As a result, we show that Maxwell's equations split into three completely uncoupled sets of equations. Further, when a medium is introduced, these decomposed Maxwell's equations either remain uncoupled, or become coupled depending on the complexity of the medium. In the second part of this work, we give a short introduction to contact geometry and then study its relation to electromagnetism. By studying examples, we show that the decomposed fields in the decomposed Maxwell's equations always seem to induce contact structures. For instance, for a plane wave, the decomposed fields are the right and left hand circulary polarized components, and each of these induce their own contact structure. Moreover, we show that each contact structure induces its own Carnot-CarathÃ©odory metric, and the path traversed by the circulary polarized waves seem to coincide with the geodesics of these metrics. This article is an abridged version of the author's master's thesis written under the instruction of Doctor Kirsi Peltonen and under the supervision of Professor Erkki Somersalo.

The approach based on investigation of characteristic properties of the resolving operators (resolvents) of stationary boundary value problems of the theory of wave diffraction by gratings is used for the analysis of the basic regularities running the formation of resonant non-stationary scattered fields. Information about singularities provides the description of the anomalous effects connected with possibility of existence, in the structures under consideration, of eigen modes having super high Q-factor, with linear "interaction" of modes in the parameter regions of spectrum crowding.

Non-Relativistic Scattering in the Presence of Moving Objects: the Mie Problem for a Moving Sphere

Recently non-relativistic boundary conditions based on the Lorentz force formulas have been introduced. It was shown that to the first order in the relative velocity v/c the results are in agreement with the exact relativistic formalism. Specific boundary value problems have been solved to get concrete results and demonstrate the feasibility of implementing the formalism. These included examples involving plane and cylindrical interfaces. Presently the velocity-dependent Mie problem, viz. scattering of a plane wave by a moving sphere, is investigated. The sphere is assumed to move in a material medium without mechanically affecting the medium. The analysis follows closely the solution for the cylindrical case, given before. The mathematics here (involving spherical vector waves and harmonics) is more complicated, and therefore sufficient detail and references are provided. The interesting feature emerging from the present analysis is that the velocity-dependent effects induce higher order multipoles, which are not present in the classical Mie solution for scattering by a sphere at rest. The formalism is sufficiently general to deal with arbitrary moving objects.