This paper demonstrates how the error of a measured or simulated antenna radiation pattern can be decreased by calculating a spherical wave expansion (SWE) with an optimised truncation mode index. Four radiation pattern examples are examined for which the analytical expression of the electrical field is known. Upon adding random and Î¦-alignment errors to the exact electric fields, the SWEs are determined and compared with the corresponding ones for the exact fields. These comparisons show that the accuracy of the calculated SWE is much better than the accuracy of the original inaccurate field. Resting on the calculated examples, a method is created which can be used to determine the optimal truncation index from the modal power distribution of a SWE without knowing the exact field. Finally, the method developed is applied to measured antenna radiation patterns. 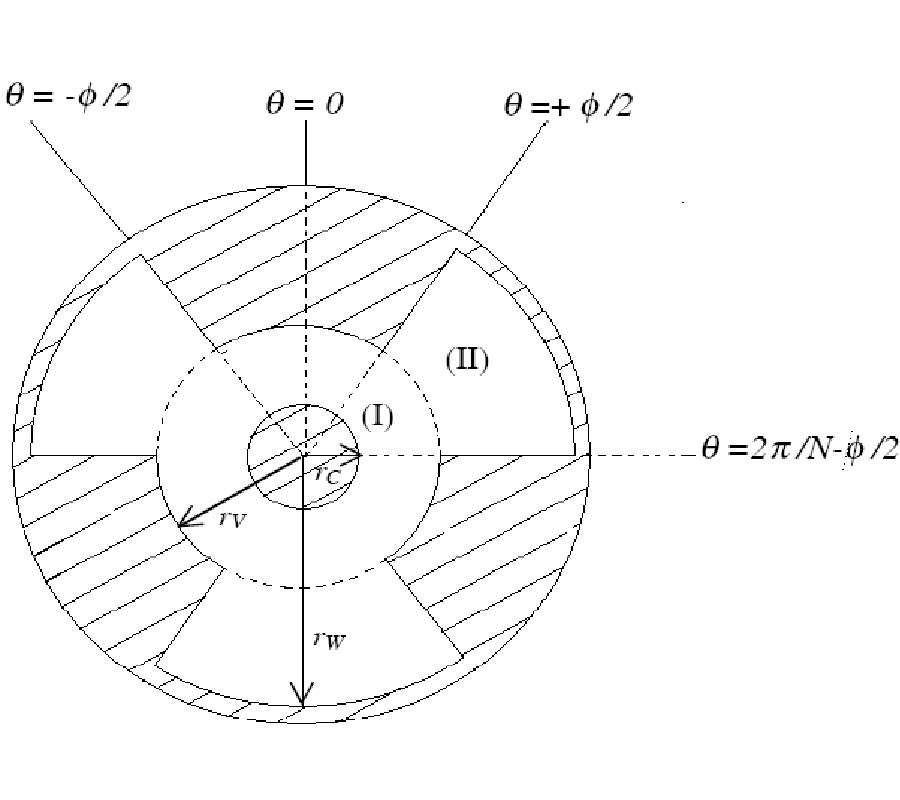 The analysis was developed for a coaxial waveguide for two configurations - one in which the central conductor is corrugated in axial slot-wedges, with ridge-wedges between them, and the other in which the outer conductor is provided with radial metal vane-wedges. Azimuthal harmonics were considered in the structure regions, the effects of which were ignored in earlier published analyses based on the surface impedance model to replace the interface between the two structure regions by a homogeneous reactive surface. For both the structure configurations, one and the same form of the dispersion relation with proper interpretation of the symbol for the radius of the ridge/vane was obtained. The dispersion relation obtained by the present analysis was validated against that obtained by other analytical methods reported in the literature. The shape of the dispersion characteristics is found uncontrollable by the structure parameters, and therefore the structure cannot be used for broadbanding a gyro-TWT. However, the plot of the eigenvalue versus the ratio of the outer conductor to ridge/vane radii strongly depended on the ridge/vane parameters. Thus the structure with its cross section tapered and ridge/groove parameters optimized has the potential for providing mode rarefaction in high-power, over-sized, over-moded gyrotrons. 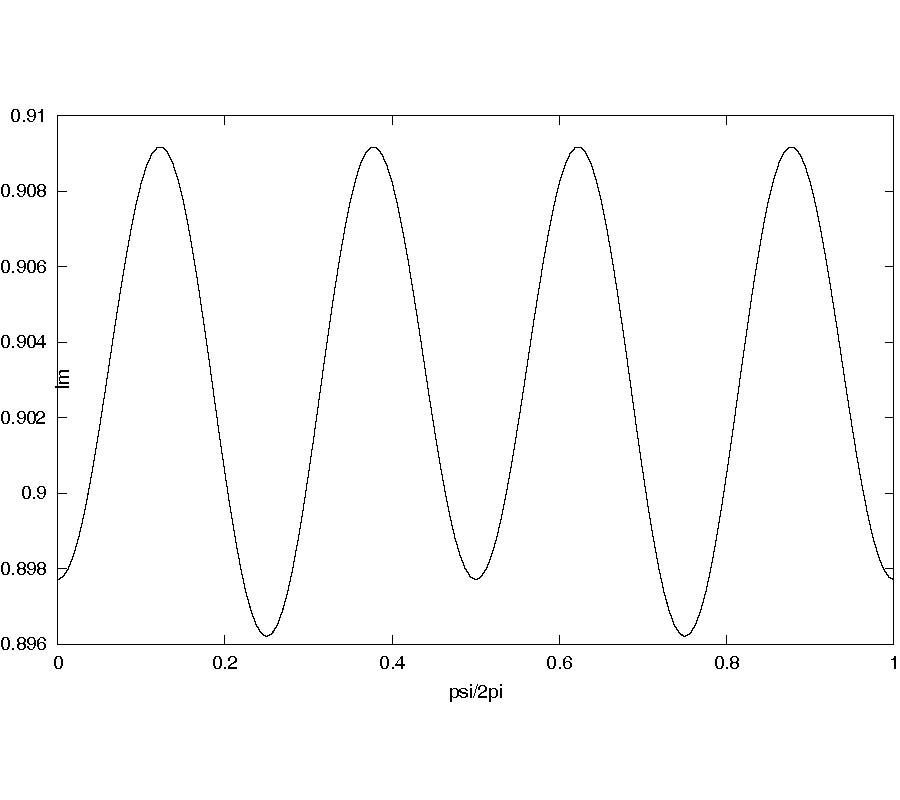 M. Booty and Gregory A. Kriegsmann

We study the scattering problem for a thin cylindrical target that is placed with arbitrary orientation in a rectangular TE10 waveguide and subjected to an imposed electromagnetic field. The scattered far-field is expressed in terms of the scattered field inside the target and the far-field expansion of the dyadic Green's function for the waveguide. In order to capture features of interest in microwave heating applications, we allow the target material's electrical properties to be arbitrary functions of position along the thin cylindrical target's axis. Reflection and transmission coefficients for such a target, and an expression for the rate of deposition of electromagnetic energy within it are derived.

A novel image solution for the canonical electrostatic problem of a point charge in an anisotropic half-space bounded by an anisotropic surface is presented. The image source is obtained in operator form by using Fourier-transformed Maxwell equations and transmission line theory. After applying methods from Heaviside operator calculus, the image operator can be interpreted as a combination of a point charge and a line-charge-bounded sector of planar charge density. The new theory is shown to coincide with the previously known image solutions of less general anisotropic media. In addition to being applicable to any physically feasible anisotropic medium of electrostatics, the method can be used for steady-current conductivity problems via a duality transformation.

The multi-resolution time domain (MRTD) technique for electromagnetic field equations was proposed by Krumpholz, Katehi et al., using Battle-Lemarie wavelets. The basis principle behind the MRTD is the wavelet-Galerkin time domain (WGTD) approach. Despite its effectiveness in space discretization, the complexity ofthe MRTD makes it unpopular. Recently, the WGTD was significantly simplified by Cheong et al. based on the approximate sampling property ofthe shifted versions ofthe Daubechies compactly supported wavelets. In this paper, we provide a rigorous analysis ofthe MRTD, employing positive sampling functions and their biorthogonal dual. We call our approach as the sampling biorthogonal time-domain (SBTD) technique. The introduced sampling and dual functions are both originated from Daubechies scaling functions of order 2 (referred as to D2), and form a biorthonormal system. This biorthonormal system has exact interpolation properties and demonstrates superiority over the FDTD in terms ofmemory and speed. Numerical examples and comparisons with the traditional FDTD results are provided.

The 3D Berenger's and uniaxial perfectly matched layers used for the truncation of the FDTD computations are theoretically investigated respectively in the discrete space, including numerical dispersion and impedance characteristics. Numerical dispersion for both PMLs is different from that of the FDTD equations in the normal medium due to the introduction of loss. The impedance in 3D homogeneous Berenger's PML medium is the same as that in the truncated normal medium even in the discrete space, however, the impedance in 3D homogenous UPML medium is different, but the discrepancy smoothly changes as the loss in the UPML medium slowly change. Those insights acquired can help to understand why both 3D PMLs can absorb the outgoing wave with arbitrary incidence, polarization, and frequency, but with different efficiency.

In this work, we summarize the existing theoretical methods based on statistical and quanty theory and give some non-standard mathematical approaches based on such theories to explain the principal scalar and vector electrodynamic problems for future applications to acoustic, radio and optical wave propagation in homogeneous, isotropic, anisotropic and inhomogeneous media. We show of how the statistical description of wave equations can be evaluated based on quantum field theory with presentation of Feynman's diagrams by a limited-to-zero finite set of expanded Green functions according to perturbation theory for single, double, triple, etc, scattering phenomenon. It is shown that at very short wavelengths, the Green's function is damped over a few wavelengths if the refractive index fluctuations in the medium are strong; at long wavelengths the effective phase velocity of electromagnetic waves may be increased. It is shown, that the coupling between different wave modes and the energy transfer between different wave modes, may be important, even for week random fluctuations of parameters of the medium, but it takes a very long time.

Malvar wavelets are often referred to as smooth local cosine (SLC) functions. In this paper the SLC functions are employed as the basis and testing functions in the Galerkin-based Method of Moments (MoM) for the Pocklington equation of thin-wire antennas and scatterers. The SLC system has rapid convergence and is particularly suitable to handle electrically large scatterers, where the integral kernel behaves in a highly oscillatory manner. Numerical examples demonstrate the scattering ofelectromagnetic waves from a thin-wire scatterer as well as wave radiation from the gull-shaped antenna. A comparison ofthe new approach versus the traditional MoM is provided.

The hemispherical dielectric resonator antenna (DRA) excited by a single-arm spiral slot is studied theoretically in this paper. The Green's function technique is employed to formulate an integral equation for the spiral slot current. The moment method with piecewise sinusoidal (PWS) basis and testing functions is used to convert the integral equation into a matrix equation by using a deltagap exciting source. The input impedance, return loss, axial ratio and radiation pattern are calculated. Numerical results demonstrate that the analysis is efficient. 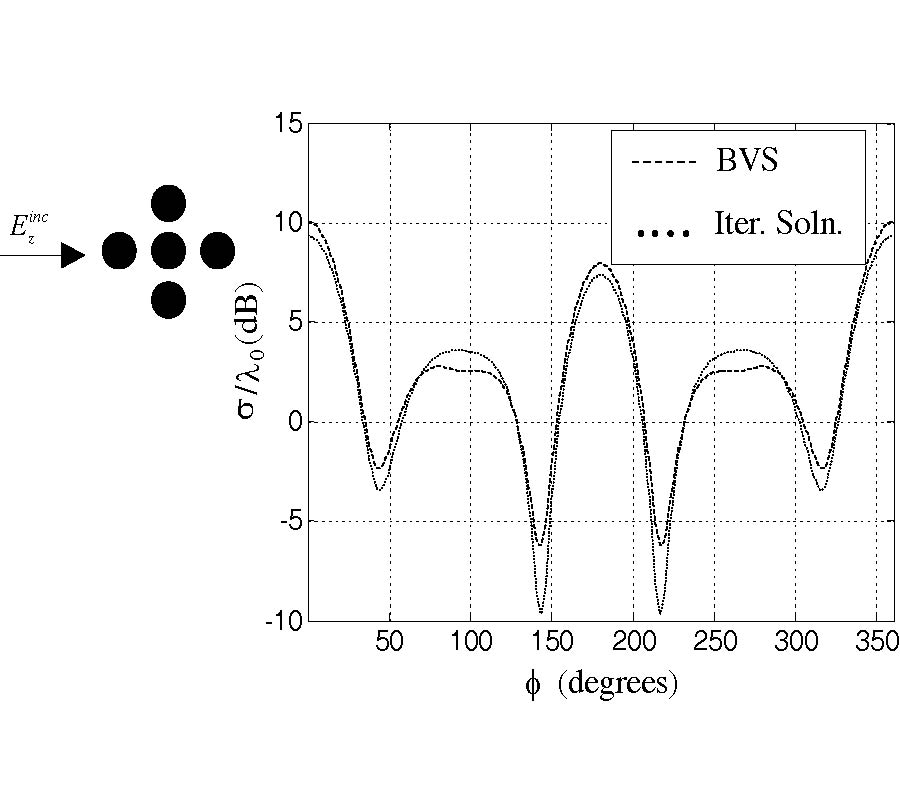 The electromagnetic scattering from a 2D chiral circular cylinders, illuminated by either a TEz or a TMz plane wave, is investigated using an iterative scattering procedure. The developed formulation and the implemented code simulate different types of cylinders, where the cylinders can be made of anisotropic chiral material with uniform or non-uniform chiral admittance distribution, homogeneous isotropic dielectric material, perfectly conducting material or a combination of all of them. The technique applies the boundary conditions on the surface of each cylinder in an iterative procedure in order to solve for the field expansion coefficients. Numerical verifications are presented to prove the validity of the formulation before presenting the scattering from an array of chiral cylinders showing significant RCS reduction in forward or backward directions based on the selection of the chirality parameter. 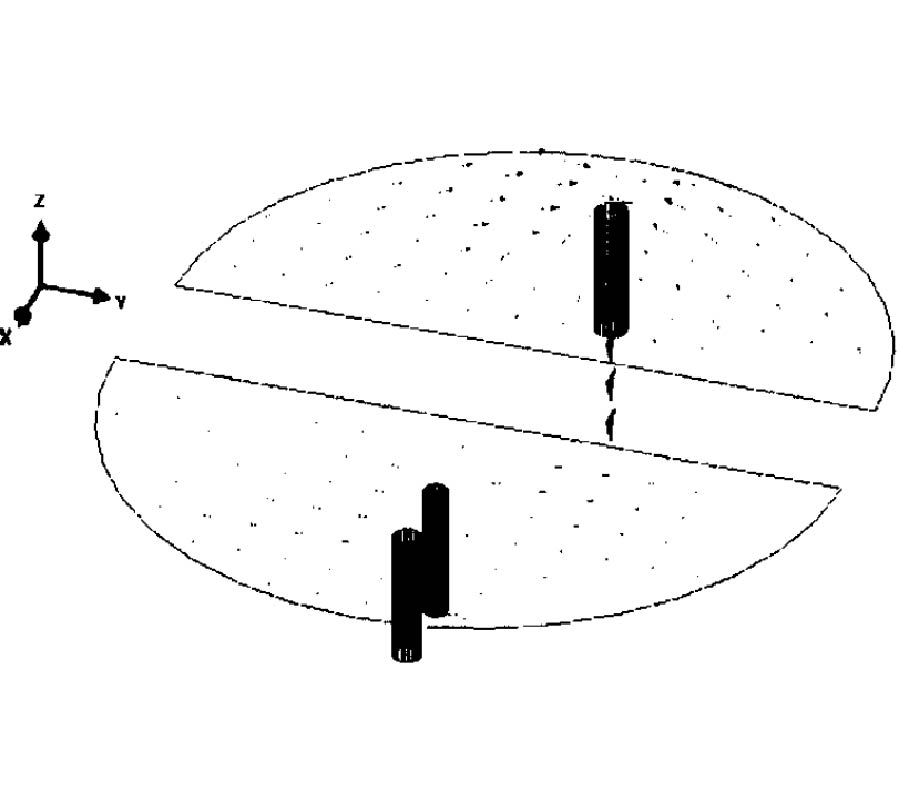 Ya Wang and C. Lee

The objective of the paper is to develop a compact and broadband microstrip patch antenna for the IMT-2000 mobile handset application. By parasitically coupling two shorted semi-disc patches with a single shorting-post each and employing Styrofoam substrate with low dielectric constant, an overall impedance bandwidth of 17.8% has been achieved to cover the frequency spectra of 1.862-2.225 GHz. The overall dimension of this proposed antenna is 44.4mm(length) Ã— 37.8mm(width) Ã— 7mm (thickness), and it would be suitable for the IMT-2000 mobile handset application. The typical antenna characteristics are presented and analysed theoretically and experimentally. 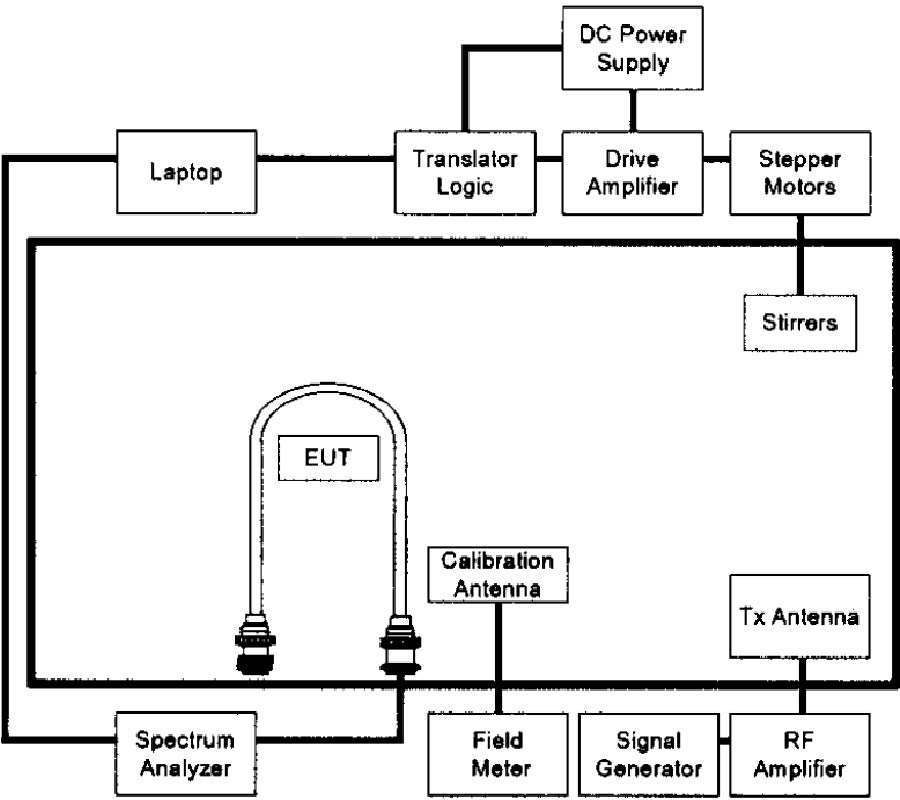 The field-to-cable coupling cross section is proposed to evaluate the coupling performance of a single-braided coaxial cable. In addition, a new definition for the coax shielding effectiveness is suggested. Both the coupling cross section and the shielding effectiveness of a 1.25 m-length RG 58 C/U 50Î© coax are measured byemplo ying both the mode-tuned reverberation chamber and GTEM cell methodologies. The detailed measurement set-ups and results are presented. The mode-tuned reverberation chamber methodologyis proven to be beneficial for assessing the cable shielding and coupling characteristics over a wide frequencyrange.

The finite element hybridized with the boundary integral method is a powerful technique to solve the scattering problem, especially when the fast multipole method is employed to accelerate the matrix-vector multiplication in the boundary integral method. In this paper, the multifrontal method is used to calculate the triangular factorization of the ill conditioned finite element matrix in this hybrid method. This improves the spectral property of the whole matrix and makes the hybrid method converge very fast. Through some numerical examples including the scattering from a real-life aircraft with an engine, the accuracy and efficiency of this improved hybrid method are demonstrated. 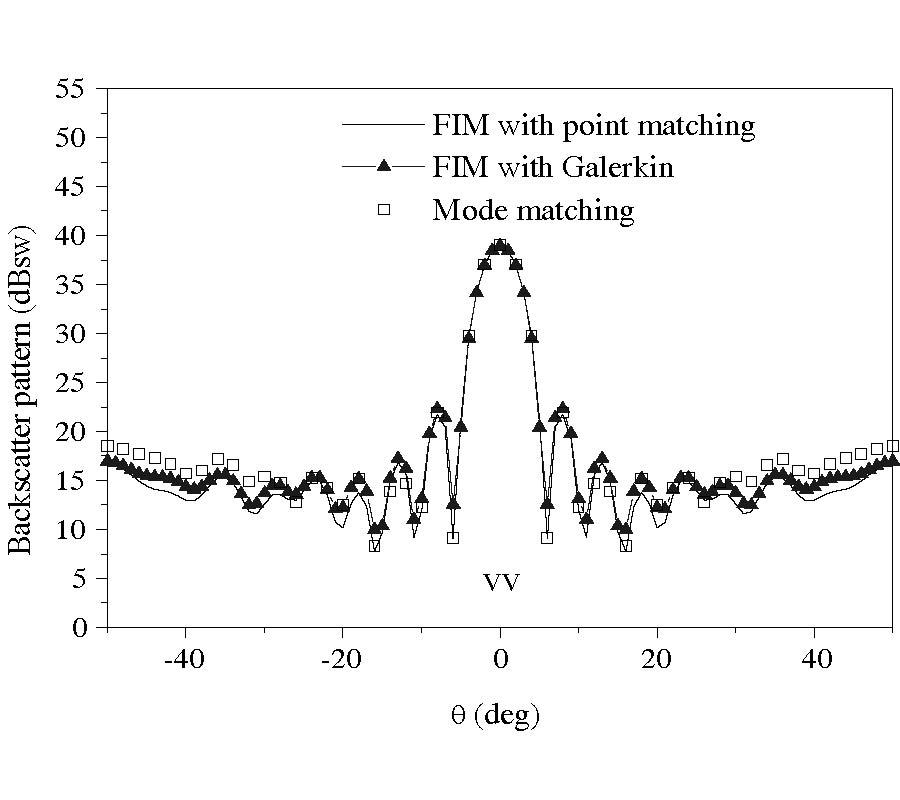 3-Dimensional Implementation of the Field Iterative Method for Cavity Modeling

The analysis of electromagnetic scattering from cavity structure is very important to many practical applications. The field iterative method (FIM) is one of the promising methods to deal with the cavity problem. In this paper, 3-dimensional (3D) FIM has been implemented using Rao-Wilton-Glisson (RWG) basis function and an accurate equivalent model of the cavity. Two testing procedures, a newly developed point matching and conventional Galerkin's methods, have been discussed for better and simpler implementation of the 3D FIM. Numerical results show that the accuracy of the 3D implementation of FIM using the newly developed point matching method is the same as that of the conventional Galerkin's method. The numerical results also show that the simpler implementation of 3D FIM using the point matching method converges very fast for all the tested cases.

A full-wave evaluation of the electromagnetic field in conformal structures with linear loading materials is presented in this paper. The analysis is performed considering at first conformal components with conventional isotropic and homogeneous media in the generalized orthogonal curvilinear reference system. In this first case, a summary of the possible analytical solutions of the vector wave equation obtainable through various factorization techniques is given. Then, the attention is focused on conformal structures involving non-conventional media (anisotropic, chiral, bianisotropic) and in this case the field solution is demanded to a new generalization of the transmission line approach. As an aside, exploiting a contravariant field formulation, which allows writing Maxwell's equations in the generalized reference system as in the Cartesian one, a useful relationship between the local curvature of the geometry and a suitable inhomogeneity of a related planar structure is presented. Finally, some results, obtained simulating the behavior of patch radiators mounted on curved bodies through the combined application of an extended Method of Line (MoL) numerical algorithm and the theoretical approach here derived, are presented.