Four-dimensional differential-form formalism is applied to define the duality transformation between electromagnetic fields and sources. The class of linear media invariant in any non-trivial duality transformation is labeled as that of self-dual media. It is shown that the medium dyadic of a self-dual medium, which represents a mapping between the two electromagnetic field two-forms, satisfies a quadratic algebraic equation. Further, it is shown that fields and sources in a self-dual medium can be decomposed in two uncoupled sets each self-dual with respect to a duality transformation. Also, for each of the decomposed fields the original medium can be replaced by a simpler effective medium. Splitting the electromagnetic problem in two self-dual parts can be used to simplify the solution process because differential equations for fields are reduced to those with second-order scalar operators. This is applied to find plane-wave solutions for the general self-dual medium.

Weak signal detection and localization are basic and important problems in radar systems. Radar performance can be improved by increasing the receiver output signal-to-noise ratio (SNR). Localizing the received signal is an important task in the detection of signal in noise. Distorting the localization of the received signal can leads to incorrect target range measurements. In this paper an algorithm is described for extracting and localizing an RF radar pulse from a noisy background. The algorithm combines two powerful tools: the wavelet packet analysis and higher-order-statistics (HOS). The use of the proposed technique makes detection and localization of RF radar pulses possible in very low signal-to-noise ratio conditions, which leads to a reduction of the required microwave power or alternatively extending the detection range of radar systems. 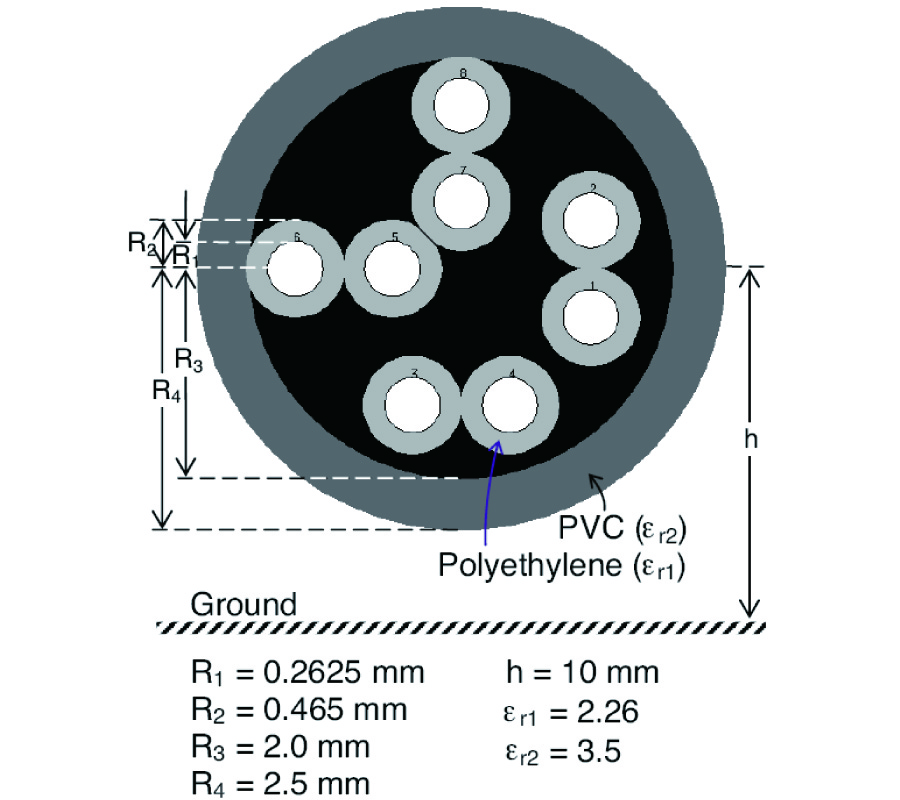 The inductive effect of near-end crosstalk for a category five unshielded, twisted-pair cable has been verified using the electromagnetic topology simulation method. Crosstalk reduction and its dependency on such parameters as driving signals, circuit configuration and impedance, are studied. The simulation results are consistent with analytical analysis. Results show that the straight- through, differential-generator, twisted-pair receptor model is the most effective configuration to control the near-end crosstalk level. This is due to the influences from both the neutralizing mutual inductance and the single current generator. The simulation results also show that electromagnetic topology-based predictions are valid only for cables that are electrically short. Simulations are carried out using a compaction scheme with a single equivalent circuit. As a result, the unshielded, twisted-pair cable portion of the circuit can be combined with a larger network for analyzing the overall response of the entire network system.

In this paper, a fast method is presented to model the forward propagation above Gaussian rough surfaces and taking into account atmospheric refraction. The method is based on the Discrete Mixed Fourier Transform (DMFT) solved by the Parabolic Wave Equation, in which the Ament boundary condition with shadowing effect is used at grazing angle. In this model, for a bistatic configuration, the surface height PDF of the illuminated points is derived and it is introduced in the boundary condition. Examples demonstrate the capacities of the method to compute propagation factor above rough surfaces following Gaussian statistics and Gaussian height correlation and the proposed method is validated by comparison to a Monte Carlo approach. 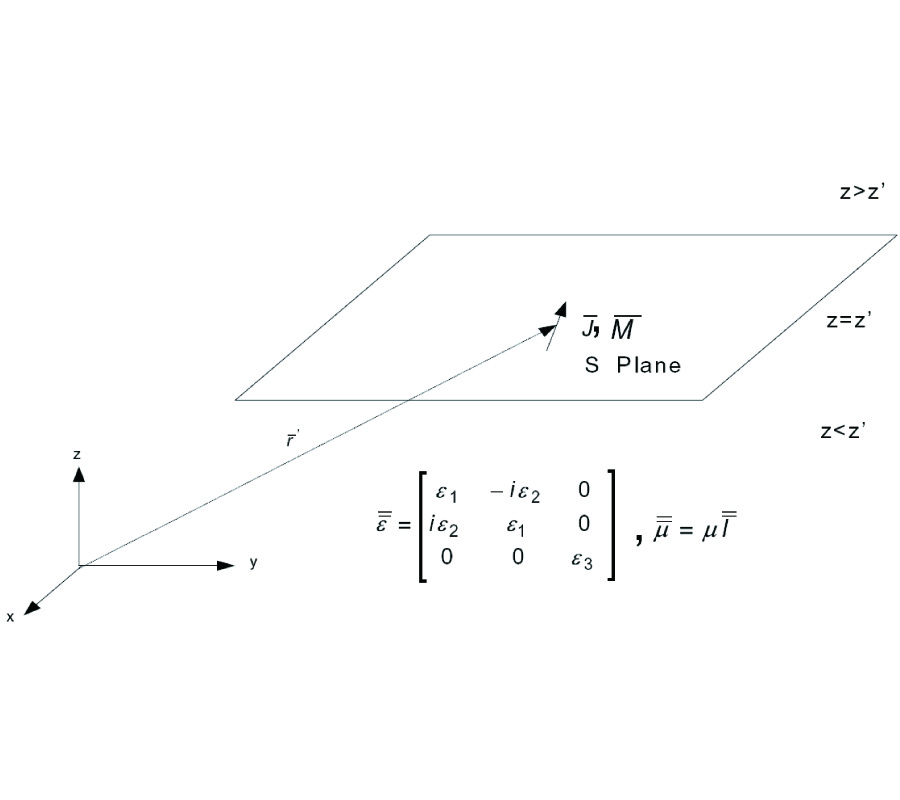 The complete set of dyadic Green's functions (DGFs) for an electrically gyrotropic medium is obtained using a new formulation technique, which consists of a matrix method with dyadic decomposition in the k-domain. The analytic expressions for DGFs are represented in a unique form in terms of characteristic field vectors that exist in an electrically gyrotropic medium. It is shown that the dyadic decomposition greatly facilitates the calculation of an inverse operation, which is crucial in derivation of Green's functions. The DGFs found here can be used to solve electromagnetic problems involving the ionosphere and new types of anisotropic materials such as ceramics and advanced composites. 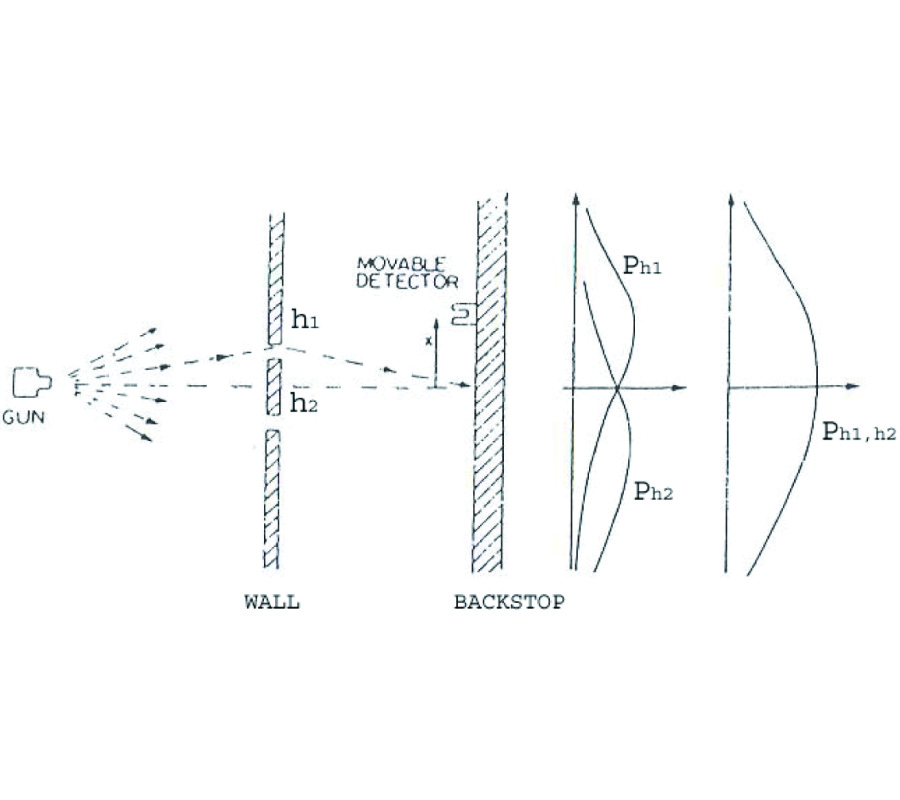