David Baudry, A. Louis, and B. Mazari

A completely automatically near-field mapping system is developed within IRSEEM (Research Institute for Electronic Embedded Systems) in order to determine electromagnetic field radiated by electronic systems. This test bench uses a 3D positioning system of the probe to make accurate measurements. The main element of this measurement tool is the probe. This paper presents a characterization of the open-ended coaxial probe which is used to measure the normal component of the electric field. 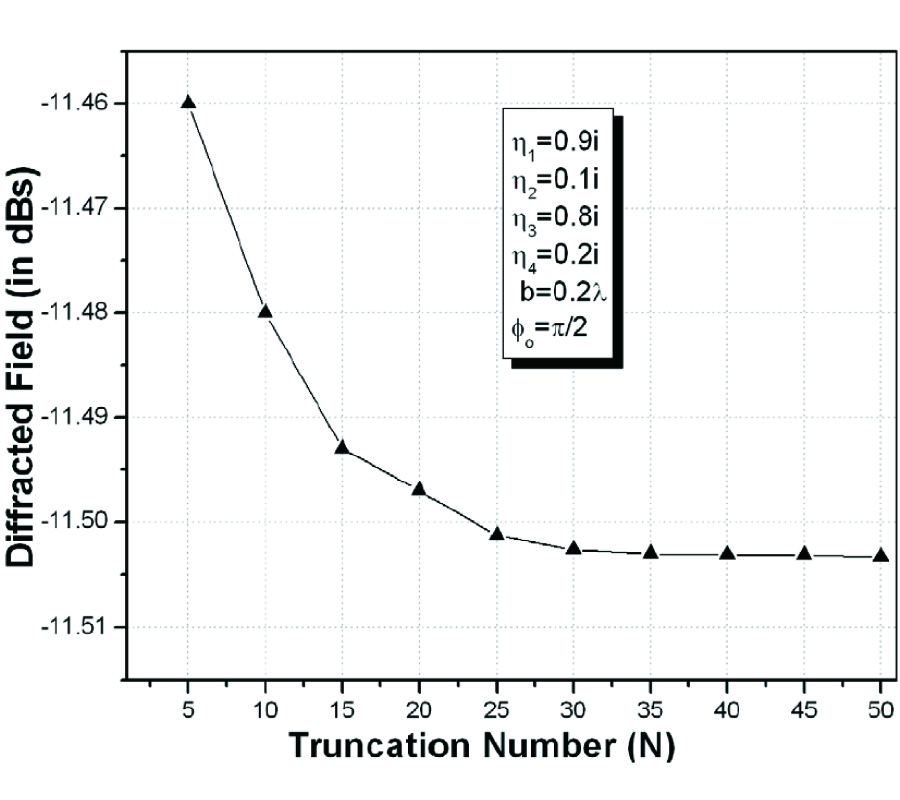 The diffraction of E-polarized plane waves by an impedance loaded parallel plate waveguide formed by a two-part impedance plane and a parallel half plane with different face impedances is investigated rigorously by using the Fourier transform technique in conjunction with the Mode Matching Method. This mixed method of formulation gives rise to a scalar Modified Wiener- Hopf equation, the solution of which contains infinitely many constants satisfying an infinite system of linear algebraic equations. A numerical solution of this system is obtained for various values of the surface impedances and waveguide height.

A Gaussian beam is an asymptotic solution to Maxwell's equations that propagate along a curve; at each time instant its energy is concentrated around one point on the curve. Such a solution is of the form

E = Re{eiPθ(x,t)E0(x, t)},
where E0 is a complex vector field, P >0 is a big constant, and θ is a complex second order polynomial in coordinates adapted to the curve. In recent work by A. P. Kachalov, electromagnetic Gaussian beams have been studied in a geometric setting. Under suitable conditions on the media, a Gaussian beam is determined by Riemann-Finsler geometry depending only on the media. For example, geodesics are admissible curves for Gaussian beams and a curvature equation determines the second order terms in θ. This work begins with a derivation of the geometric equations for Gaussian beams following the work of A. P. Kachalov. The novel feature of this work is that we characterize a class of inhomogeneous anisotropic media where the induced geometry is Riemannian. Namely, if ε, μ are simultaneously diagonalizable with eigenvalues εi, μj , the induced geometry is Riemannian if and only if εiμj = εjμi for some i ≠ j. What is more, if the latter condition is not met, the geometry is ill-behaved. It is neither smooth nor convex. We also calculate Riemannian metrics for different media. In isotropic media, gij = εμδij and in more complicated media there are two Riemannian metrics due to different polarizations.

A vectorial modal analysis of two-dimensional (2-D) dielectric grating is presented. The transmission and reflection from the 2-D dielectric-grating slab are computed by combining the generalized scattering matrix and the modal analysis. New insights on the boundary conditions between two grating structures are presented to be suitable for two-dimensional gratings. The results obtained using the present analysis are verified with published experimental and numerical results for both one- and two-dimensional dielectric-grating slabs. The present approach provides fast convergence and provides good agreement with other numerical techniques. This technique is used to study the effects of different parameters for designing a wide band FSS composed of multilayered 2-D grating slabs. 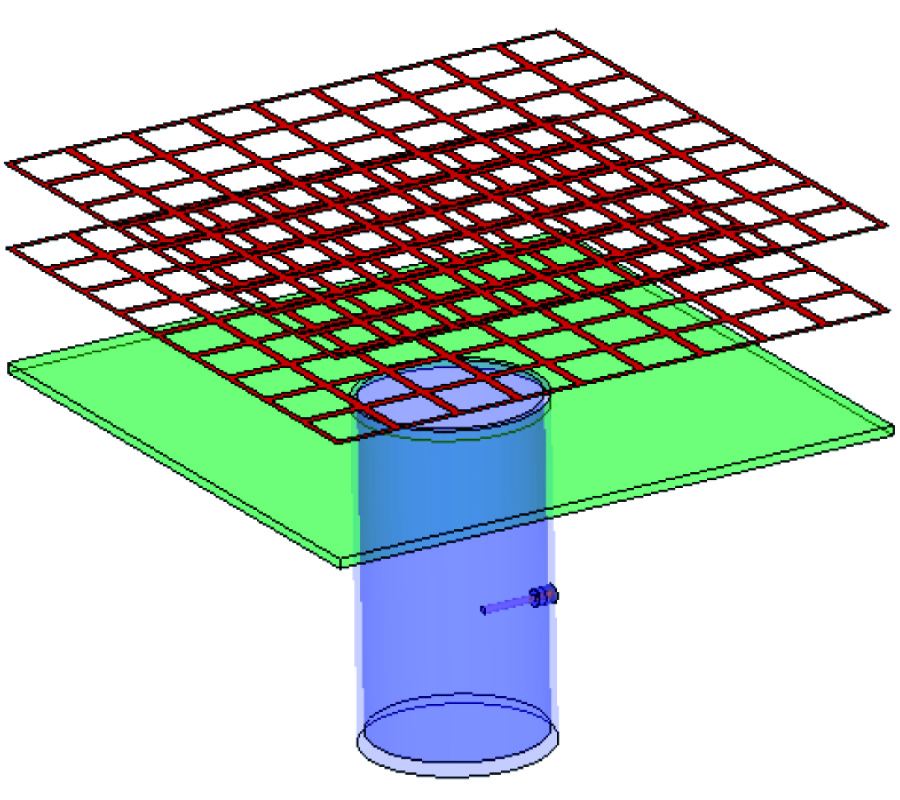 The design of a compact, single feed, dual frequency dual polarized and electronically reconfigurable microstrip antenna is presented in this paper. A square patch loaded with a hexagonal slot having extended slot arms constitutes the fundamental structure of the antenna. The tuning of the two resonant frequencies is realized by varying the effective electrical length of the slot arms by embedding varactor diodes across the slots. A high tuning range of 34.43% (1.037-1.394 GHz) and 9.27% (1.359-1.485 GHz) is achieved for the two operating frequencies respectively, when the bias voltage is varied from 0 to -30 V. The salient feature of this design is that it uses no matching networks even though the resonant frequencies are tuned in a wide range with good matching below -10 dB. The antenna has an added advantage of size reduction up to 80.11% and 65.69% for the two operating frequencies compared to conventional rectangular patches. 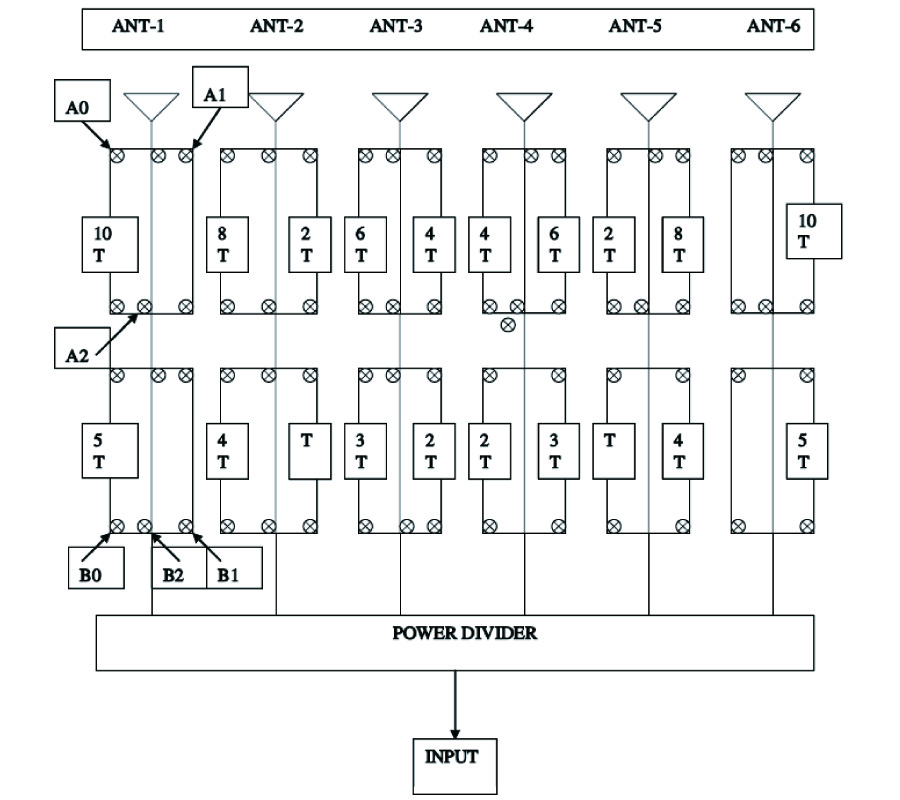 In this paper a programmable beam-switching algorithm for planar phased array antenna is presented. Using micro-controller the planar array can be steered over 49 directions over the complete hemisphere. Each element is connected to delay lines and switching module. The bits at micro-controller output after being amplified by driver circuit are fed to the switching modules which control the insertion of fixed phase tapering. Switching is performed on a unique set of delay lines to steer the beam in particular direction in the horizon. For high frequency application PIN diode is used as switch. In total 12 bits are used to select 49 beam positions with some bit patterns being redundant. 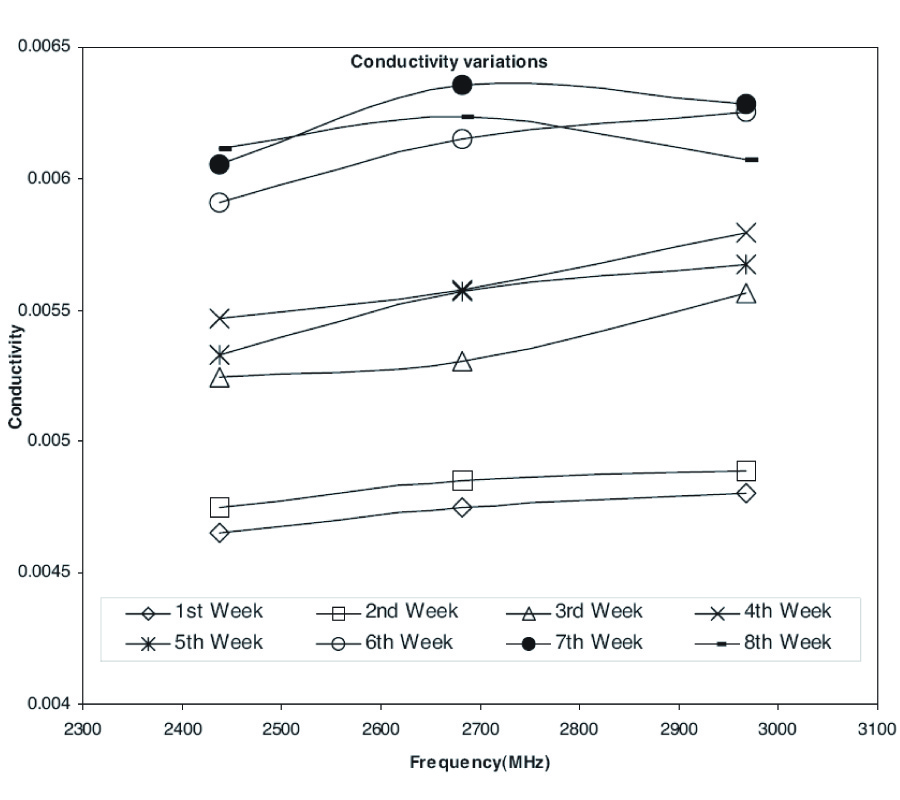 In this communication a comprehensive study of the dielectric properties of human breast milk at microwave frequencies is reported. The samples are collected at weekly intervals following child birth. Measurements are made at the S -band of microwave frequency employing the rectangular cavity perturbation technique. The dielectric constants of the breast milk samples are found to increase as weeks elapse, which is attributed to the reduced fat content and increased lactose concentration. The conductivity of the breast milk samples is similarly found to increase due to the increased dilution. 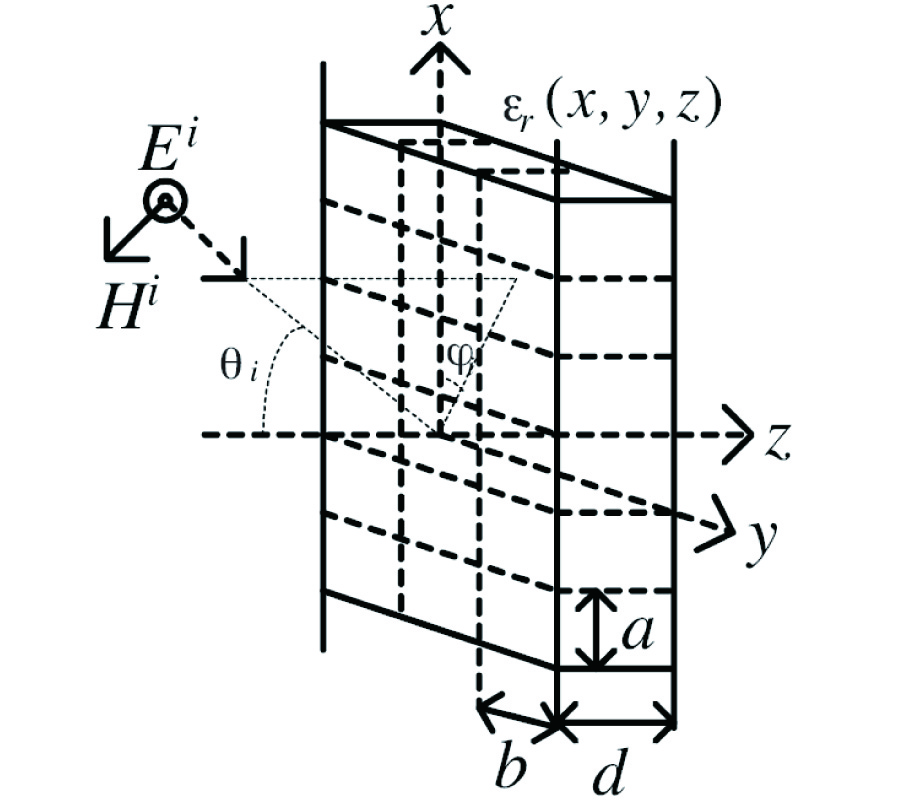 A general method is proposed to frequency domain analysis of inhomogeneous two-dimensional periodic gratings. Each component of electromagnetic fields is expressed by several spatial harmonic plane waves. Then, two differential equations are obtained for the reflection and transmission matrices, using wave-splitting approach. Solving these equations gives us the co- and cross-polarized reflection and transmission coefficients. The method is studied using some examples. 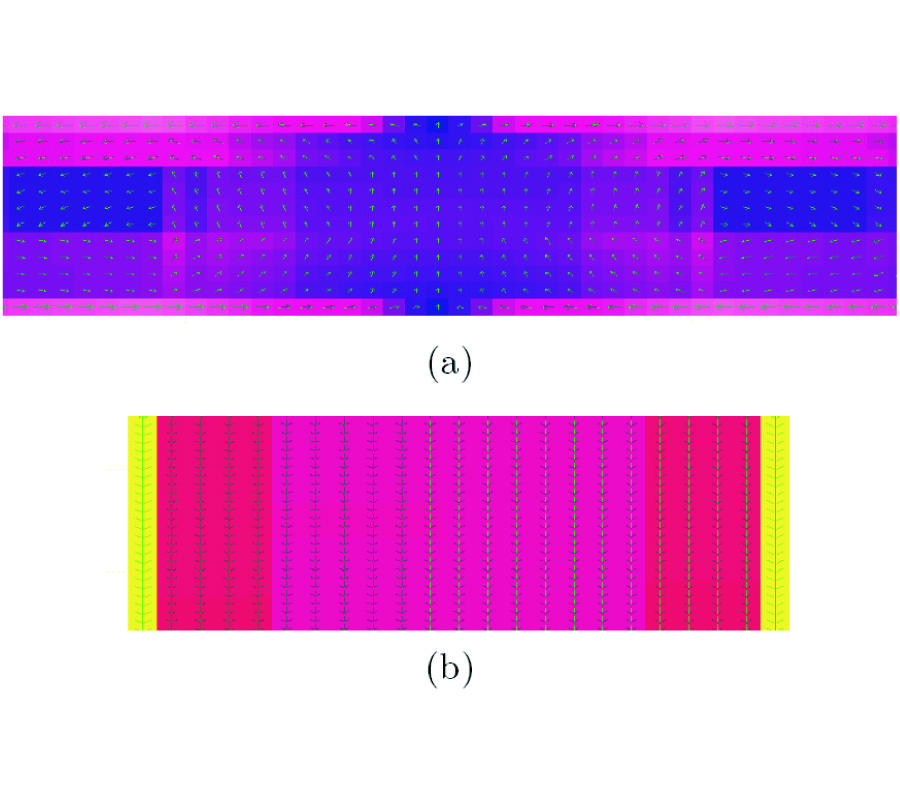 In the present paper a simple model has been given to simulate the signal propagation through two cross orthogonal microstrip lines in two different layers of the PCB board. First the structure has been analyzed using full wave software like HFSS, then a simple and suitable lumped equivalent circuit is proposed for the cross talk region and its parameters are obtained. Finally the sparameters of this equivalent circuit compared with the results of full wave simulations. The results show good agreement up to some GHz.

The paper discusses the experimental analysis on a cylindrical dielectric resonator antenna (DRA) with a parasitic conducting strip, loaded coplanar with the 50Ω microstripline feed. The antenna offers an impedance bandwidth as high as 17.33% at a centre frequency of 2.77 GHz, as a result of the enhanced coupling produced by the coplanar strip. The return loss, impedance, polarization and radiation characteristics of the antenna are studied. The radiation patterns are broad and the low cross-polarisation levels confirm that the antenna is linearly polarised over the entire impedance bandwidth.

A waveguide magic tee at W band is analyzed exactly and developed. The analysis approach is a combination of the mode expansion method and finite element method, which is based on the weak form of Helmholtz equation. Mode expansion instead of PML (Perfectly Matched Layers) is used to truncate the computing space of finite element. A magic tee at W band (75∼110 GHz) with the structure, which is easy for manufacture, is developed. Calculated results are presented and compared to those in experiments. Agreement has been observed. A sensitivity analysis is carried out, which shows the influence of the tolerance of manufacture on the performance of the magic tee. And the power carrying capacity of the designed magic tee is also evaluated.

Steven Gao and A. Sambell

This paper presents a simple broadband proximity- coupled microstrip patch antenna. A circular patch is used as the main radiator, and an H-shaped shot is cut in the ground plane below the feed line. A stepped-width microstrip line is used to feed the patch through proximity coupling. By using a single patch, the prototype antenna achieves an impedance bandwidth of 26%. Low cross-polar levels below -20 dB are observed in both E- and H -planes. The broadband antenna is planar, small size, simple in structure, low in cost, and easy to be fabricated, thus attractive for practical applications.

A method is proposed for analysis of arbitrarily loaded lossy and dispersive nonuniform single or coupled transmission lines. In this method, all the per-unit-length parameters or matrices of the single or coupled lines and also the voltages and currents along the length of them are expanded in Taylor′s series. The solutions of voltages and currents are obtained after finding unknown coefficients of their series. The accuracy of the method is studied using analysis of some special types of single and coupled transmission lines. 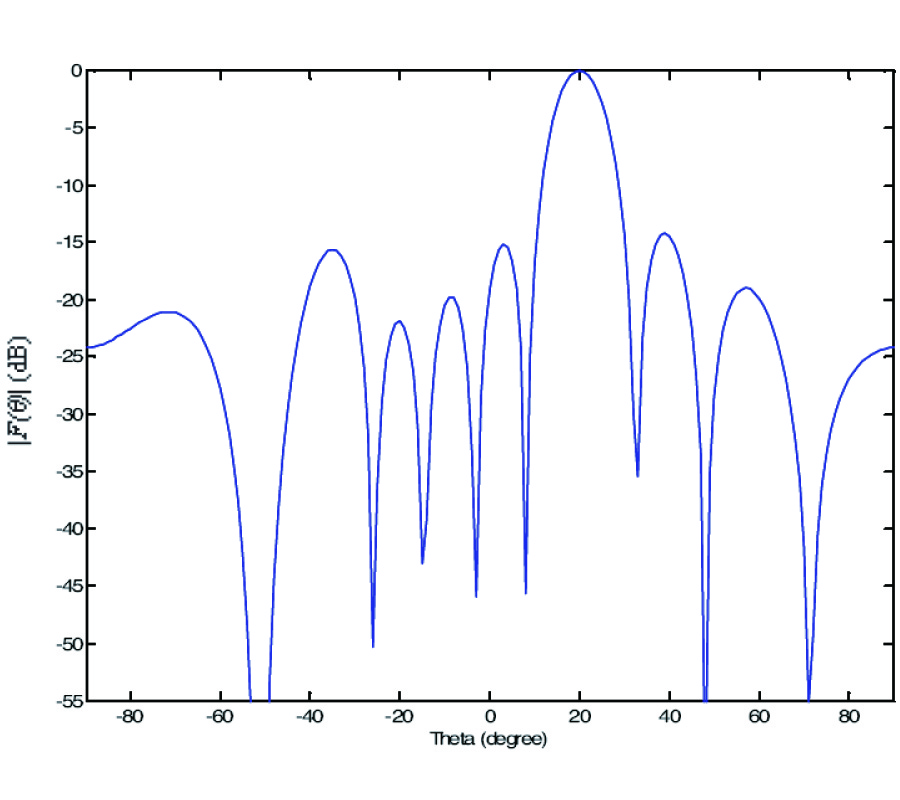 In this article, an efficient method for the pattern synthesis of the linear antenna arrays with the prescribed null and multi-lobe Beamforming is presented. Multi-lobe pattern and adaptive nulling of the pattern is achieved by controlling only the phase of each array element. The proposed method is based on the Sequential Quadratic Programming (SQP) algorithm and the linear antenna array synthesis was modelled as a multi-ob jective optimization problem. Multi-ob jective optimization is concerned with the maximization (or minimization) of a vector of ob jectives functions in the directions of desired signal that can be sub ject of a number of constraints (in our case, the constraints can be imposed as the null in the direction of interfering signal). To verify the validity of the technique, several illustrative examples of uniform excited array patterns with the main beam is placed in the direction of the useful signal and null is placed in the direction of potential interferers, and multi-beam patterns are demonstrated.

In this paper, the exact formulas are derived for the timedomain electromagnetic field generated by a delta-function current in a horizontal electric dipole located on the planar boundary between a homogeneous isotropic medium and one-dimensionally anisotropic medium. Similar to the isotropic case, the amplitude of the tangential pulsed electric field along the boundary is 1/ρ2, which is characteristic of the surface-wave or lateral pulse. The tangential electric field consists of a delta-function pulse travelling in Region 2 (anisotropic medium), a oppositely directed delta-function travelling in Region 1 (isotropic medium), and a final static electric field due to the charges left on the dipole. It is seen that the pulsed electromagnetic field components consist of the first and second pulsed in the two regions with different velocities. 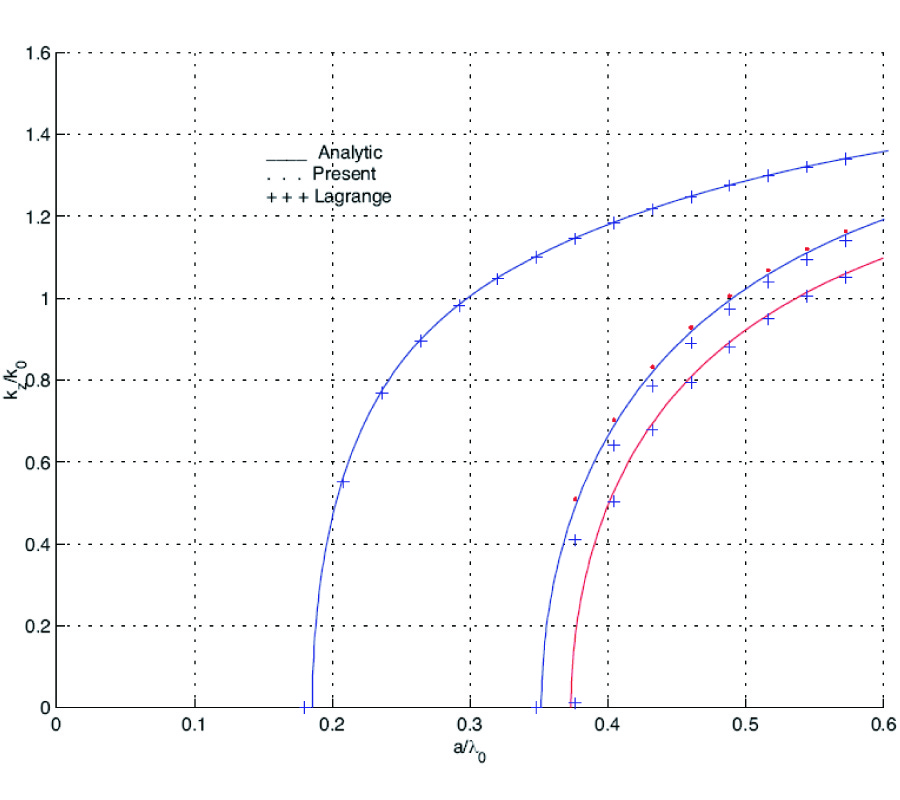 The reconstruction of the frequency-dispersive constitutive parameters of general bianisotropic media is achieved by an optimization approach. The constitutive parameters are optimized in order to match the measured reflection and transmission data for plane wave incidence onto bianisotropic slabs. Two optimization methods, in our case the differential evolution (DE) algorithm and the Nelder-Mead simplex method, are used for the reconstruction at low frequencies. The Nelder-Mead simplex method is then used to obtain the solutions at higher frequencies, where the initial guess is obtained by the linear extrapolation of the solutions at previous frequencies. The proposed reconstruction method is tested with both noiseless and noisy data, and is proven feasible and robust.