In this paper, an efficient algorithm is presented to analyze the electromagnetic scattering by electrically large-scale dielectric objects. The algorithm is based on the multi-region and quasiedge buffer (MR-QEB) iterative scheme and the conjugate gradient (CG) method combined with the fast Fourier transform (FFT). This algorithm is done by dividing the computational domain into small sub-regions and then solving the problem in each sub-region with buffer area using the CG-FFT method. Considering the spurious edge effects, local quasi-edge buffer regions are used to suppress these unwanted effects and ensure the stability. With the aid of the CG-FFT method, the proposed algorithm is very efficient, and can solve very largescale problems which cannot be solved using the conventional CG-FFT method in a personal computer. The accuracy and efficiency of the proposed algorithm are verified by comparing numerical results with analytical Mie-series solutions for dielectric spheres.

In this paper, a new structure is introduced to design resonators with very short length and without any discontinuity.The introduced structure, called Nonuniform Impedance Resonator (NIR), is an open- or short-circuited Nonuniform Transmission Line (NTL).To synthesize NIRs, strip width or the characteristic impedance function of the microstrip NIRs is expanded in a truncated Fourier series, first. Then, the optimum values of the coefficients of the series are obtained through an optimization approach.The usefulness of the proposed method is verified using some examples. 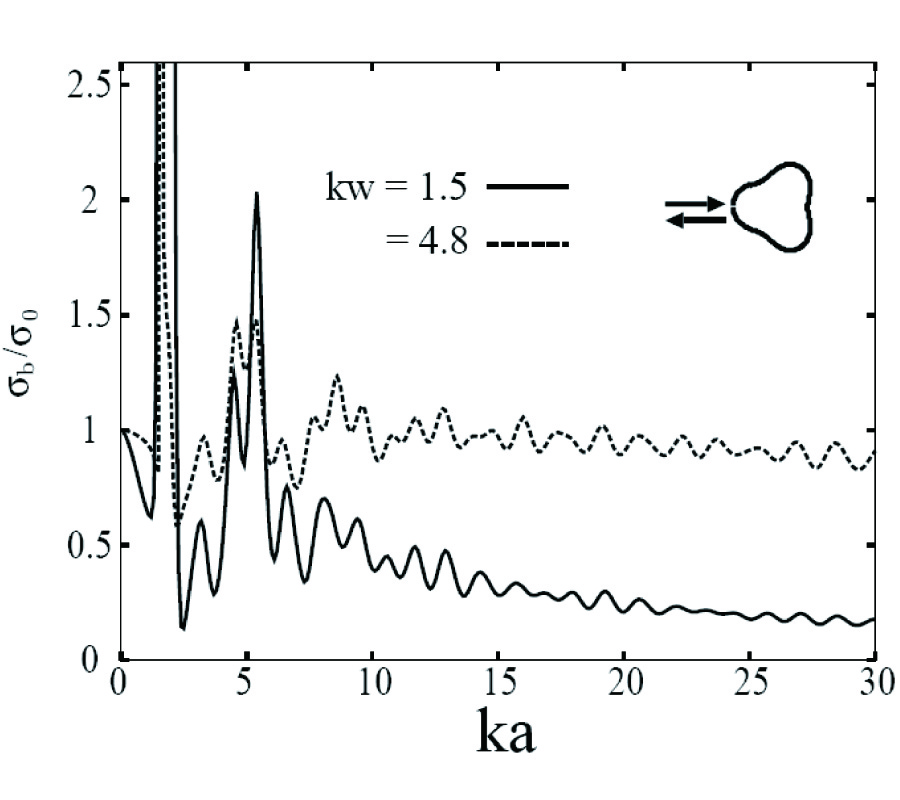 In [9], scattering problems of plane and beam wave incidences were presented. In that study, it was found that the target configuration together with beam width have a major effect on the laser RCS (LRCS). This conclusion was proved for horizontal incident wave polarization (E-polarization) in free space. The polarization of incident waves is one of the key parameters in the scattering problems and in particular in the resonance region where the target has a comparable size with the wave length. In this work, we extend our study and investigate the impact of vertical incident wave polarization (H-polarization) on the LRCS of large size targets and compare it with RCS of targets with plane wave incidence.

A moment method analysis of a broad wall slot coupled crossed rectangular waveguide junction has been presented in this paper. The coupling slot is longitudinal/transverse and offset from the centre lines of the guides. The integral equations, governing the characteristics of the device, have been obtained using Multiple Cavity Modeling Technique, taking into account of the finite wall thickness and the TE00 mode at the slot apertures and have been solved using Moment Method to obtain the aperture distribution. The normalized resonant lengths/complex S-parameters have been calculated from this field distribution for different guide height/slot offsets/slot widths/slot thickness of the longitudinal/transverse slot over the frequency band. Numerical data, thus obtained, have been compared with measured/literature available/CST Microwave Studio Simulated data. The theory has been validated by the reasonable agreement obtained between them. It has been shown that, neglecting the TE00 mode at the slot apertures can adversely effect the estimation of the resonant frequency and equivalent network parameters. 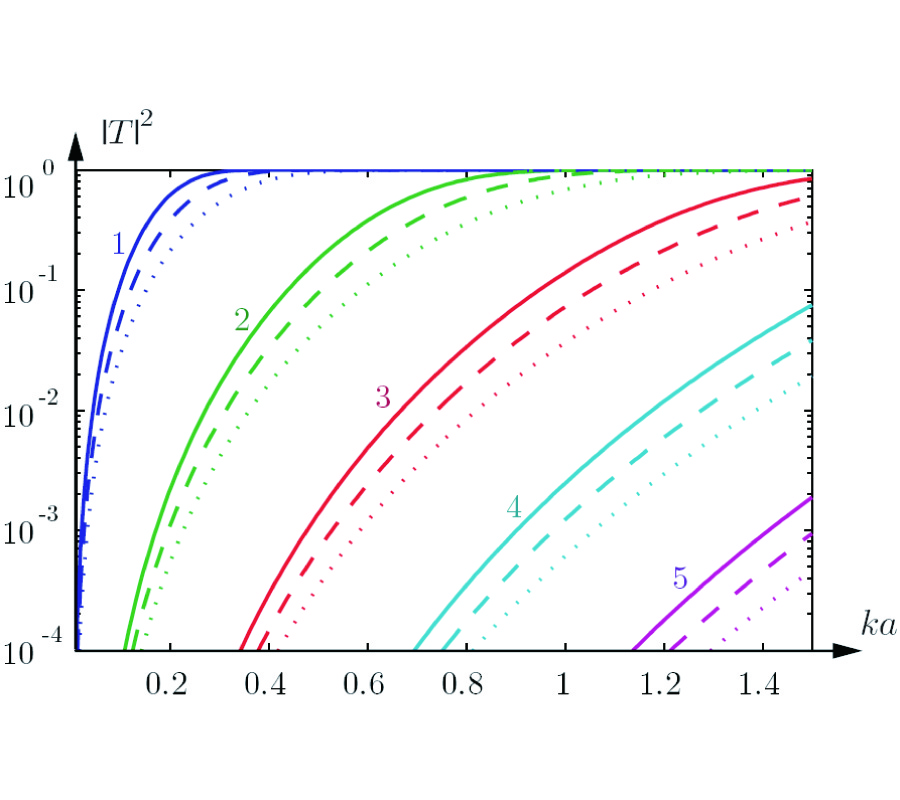 On the Spectral Efficiency of a Sphere

In many cases it is desired to have both high capacity and small antennas in wireless communication systems. Unfortunately, the antenna performance deteriorates when the antennas get electrically small. In this paper, fundamental limitations from antenna theory and broadband matchingare used to analyze fundamental limitations on the spectral efficiency of an arbitrary antenna inserted inside a sphere. 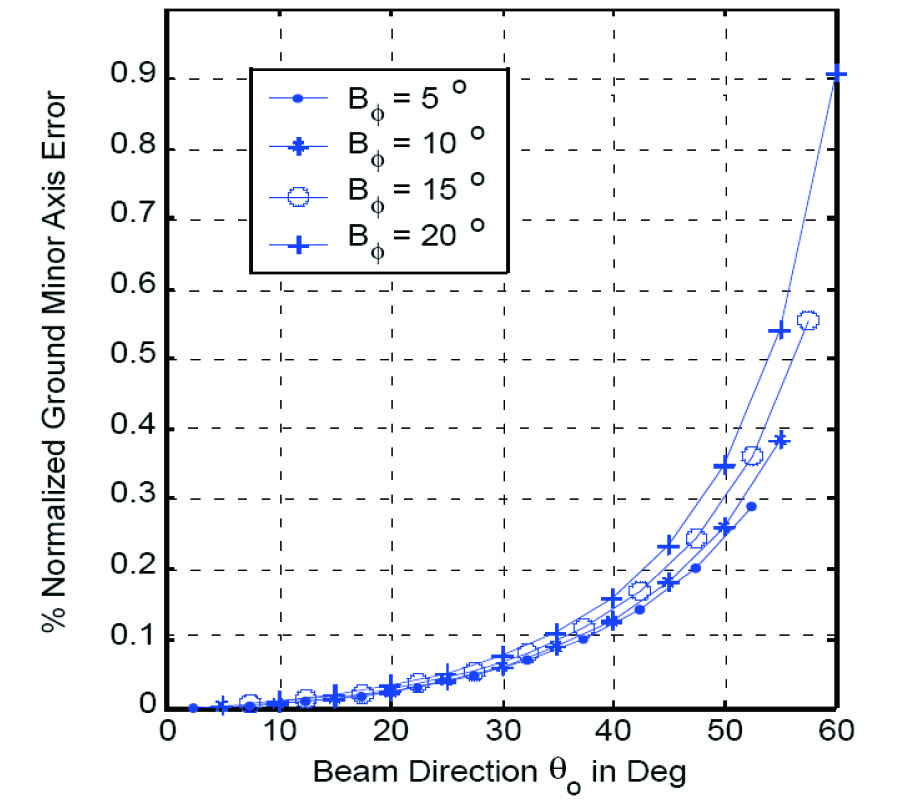 Cellular communications using high altitude platforms will predominate the existing conventional terrestrial or satellite systems. Radio coverage of HAPs is an important issue that affect the cellular system design, therefore a deep analysis of the HAP cell footprint will be presented in two coverage models and the cell parameters are also deduced for subsequent cellular design. In the design stage, a cell generating algorithm is introduced to define their locations more accurate. When deploying the cellular system with such algorithm, the cells have proper overlap and interspacing. 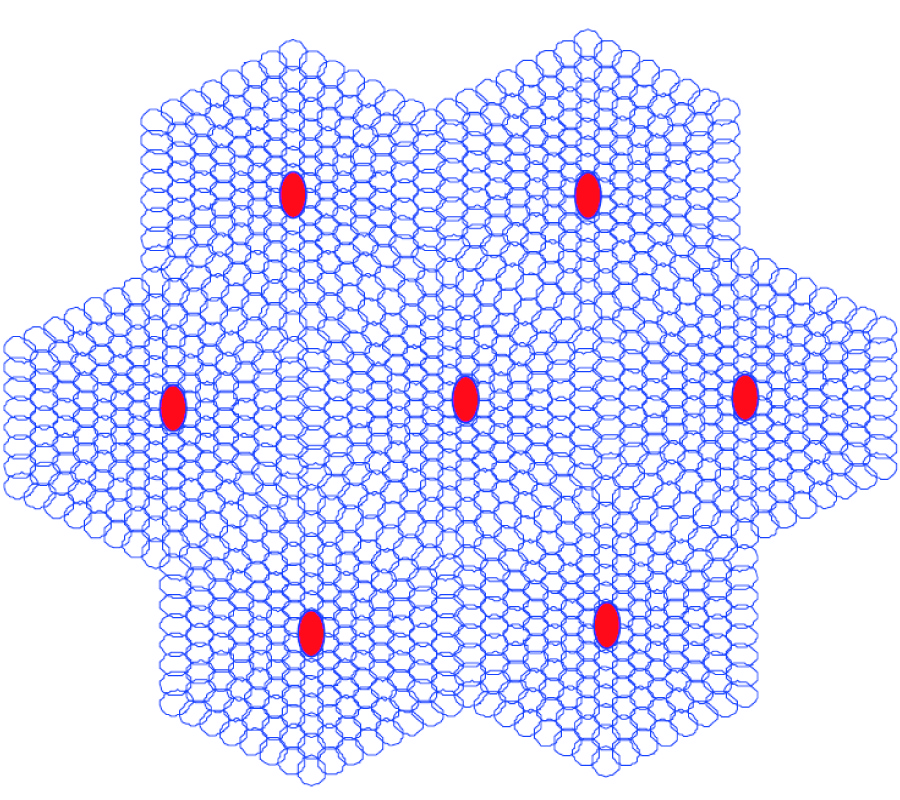 Cellular communications using high altitude platforms (HAPs) will predominate the existing conventional terrestrial or satellite systems but requires some optimization especially in the cellular radio coverage design. The design of HAPs cellular system suffers from increasing cell area when directing the same beam to cover lower elevation regions and therefore requires some modification in its location. In this paper either spot-beam antennas or antenna phased arrays are used in the radio coverage which are optimized in directing their beams to satisfy mostly uniform cellular layout with minimal coverage problems such as coverage gaps between cells or excessive cells overlap. The cells locations determination is done through proposed algorithm that takes into consideration the cell area increase at lower elevation angles and provides mostly uniform radio coverage especially at the cell edges. 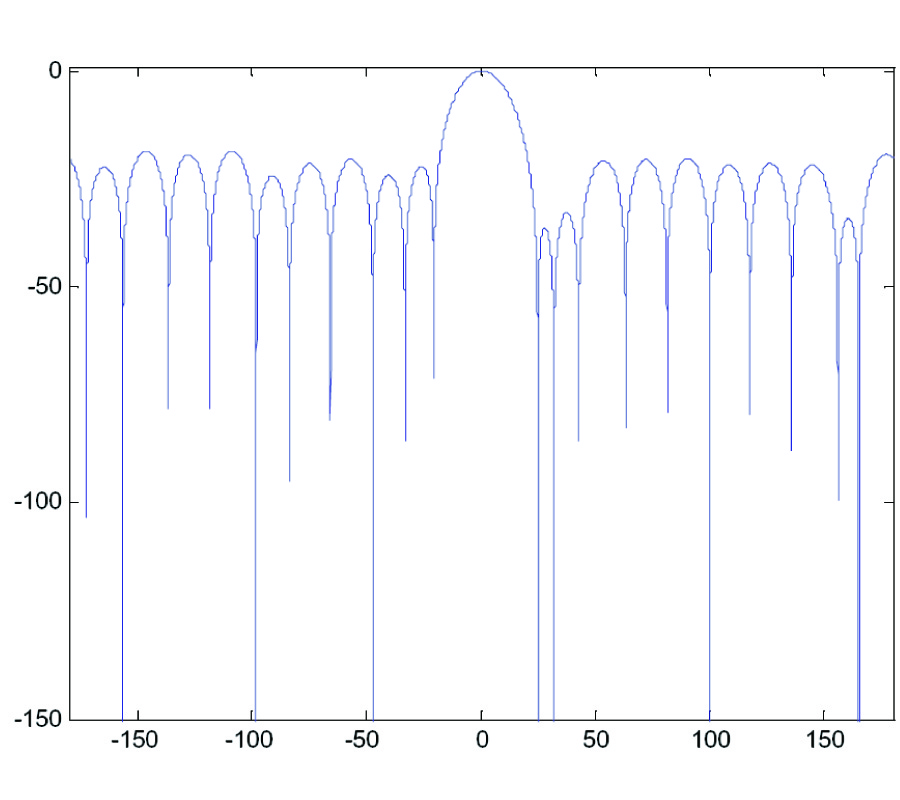 This paper presents a mode matching method to analyze axisymmetric coaxial discontinuity structures, commonly used in the permeability and/or permittivity measurement.By performing the mode matching procedures at all discontinuity interfaces, a set of general simultaneous equations are derived, which can be easily solved.The s parameters and field distribution in the structures are readily obtained from the solution to the simultaneous equations. As a preliminary preparation for the mode matching method, the propagation constants of all the sections in the structure have to be solved.A one-dimensional frequency domain finite difference method is presented in this paper to efficiently solve the propagation constants for the multi-layered axisymmetric structures. Numerical examples show that the results obtained from the method in this paper are in good agreement with those from other methods in the published literature papers, and the method presented here has much higher efficiency. 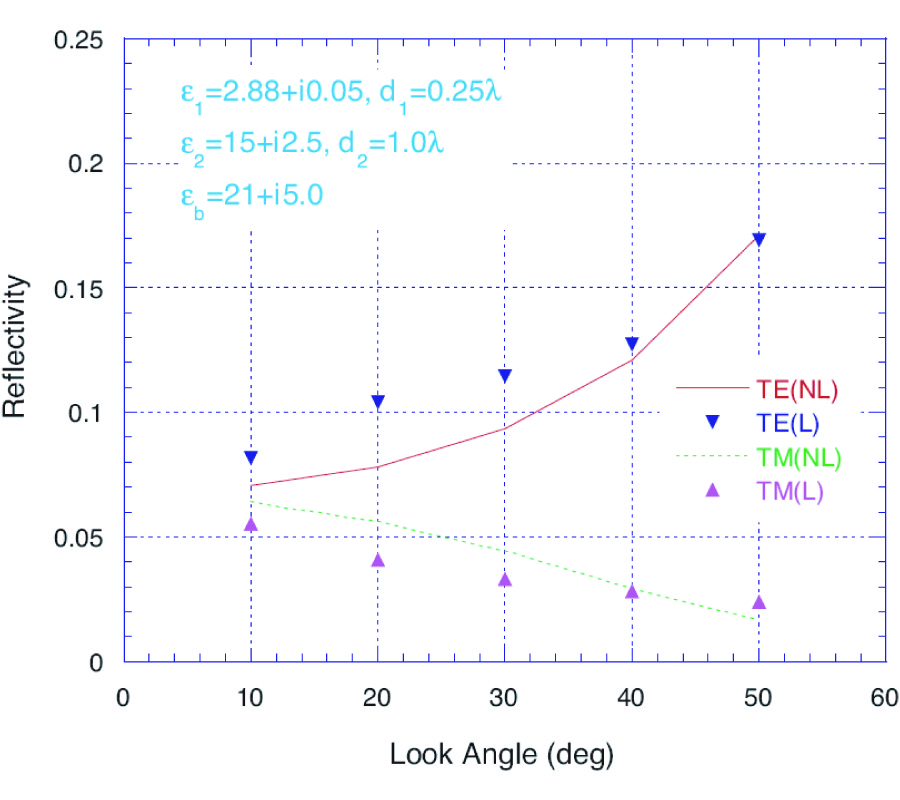 Numerical simulations of emission for two-dimensional randomly rough surfaces with an inhomogeneous layered medium are presented. The inhomogeneous layered medium is modeled by a generalized n-layered stratified media. The numerical method was adopted from the physics-based two-grid method (PBTG). To ensure the strict accuracy requirement while to relief the memory and CPU resources, the PBTG in conjunction with the sparse-matrix canonical grid method (SMCG) was used in this paper. In so doing the reflected terms of the dyadic Green's function that accounts for layered media were added into the integral equations governing the surface tangential fields. Since the reflected part of the dyadic Green's function does not contain any singularity, the normal components of the fields remain the same as in the case of homogeneous surfaces. It was found that the elements of Green's tensor are only important to the near-field since they decay very fast as spatial distance goes beyond a few wavelengths. The resulting integral equations are then solved by the Method of Moment (MoM). Comparisons between the inhomogeneous and the homogeneous rough surfaces suggest that the presence of the inhomogeneous layered medium has non-negligible contributions to emission, depending on the dielectric gradient and is polarization dependent. 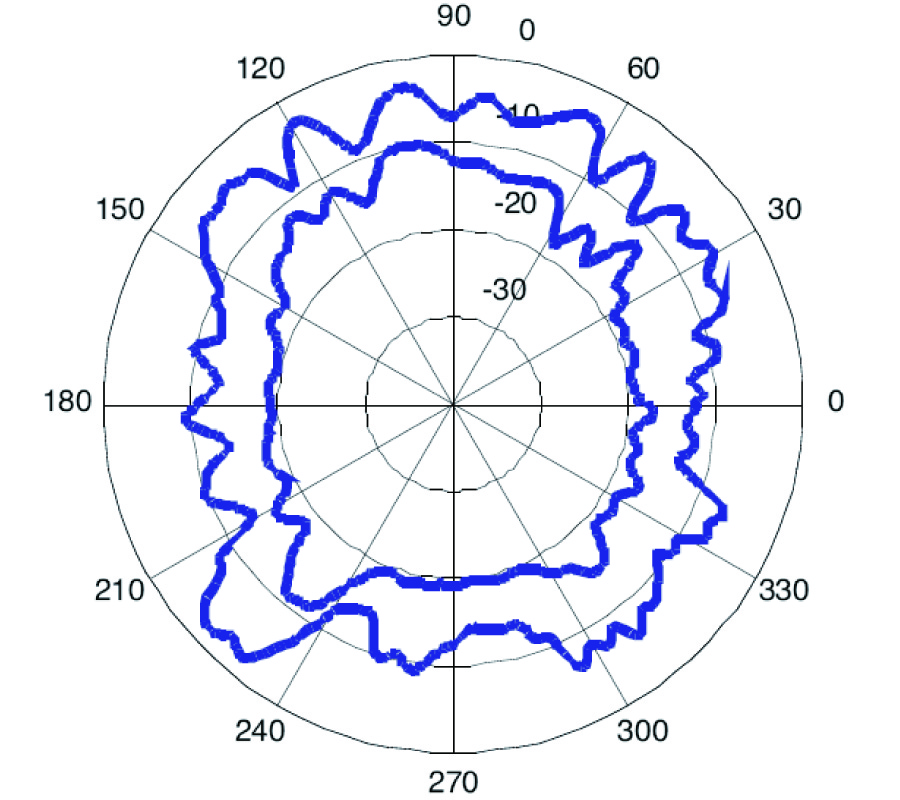 A microstrip square-ring slot antenna (MSRSA) for UWB (Ultra Wideband) antenna applications is proposed and improved by compaction. This structure is fed by a single microstrip line with a fork like-tuning stub. By splitting the square-ring slot antenna (SRSA) and optimization ofthe feeding network, the required impedance bandwidth is achieved over the UWB frequency range (3.1 to 10.6 GHz). The experimental and simulation results exhibit good agreement together. Parametric study is applied to compaction of structure. This compaction provides a good radiation pattern and a relatively constant gain over the entire band off requency. 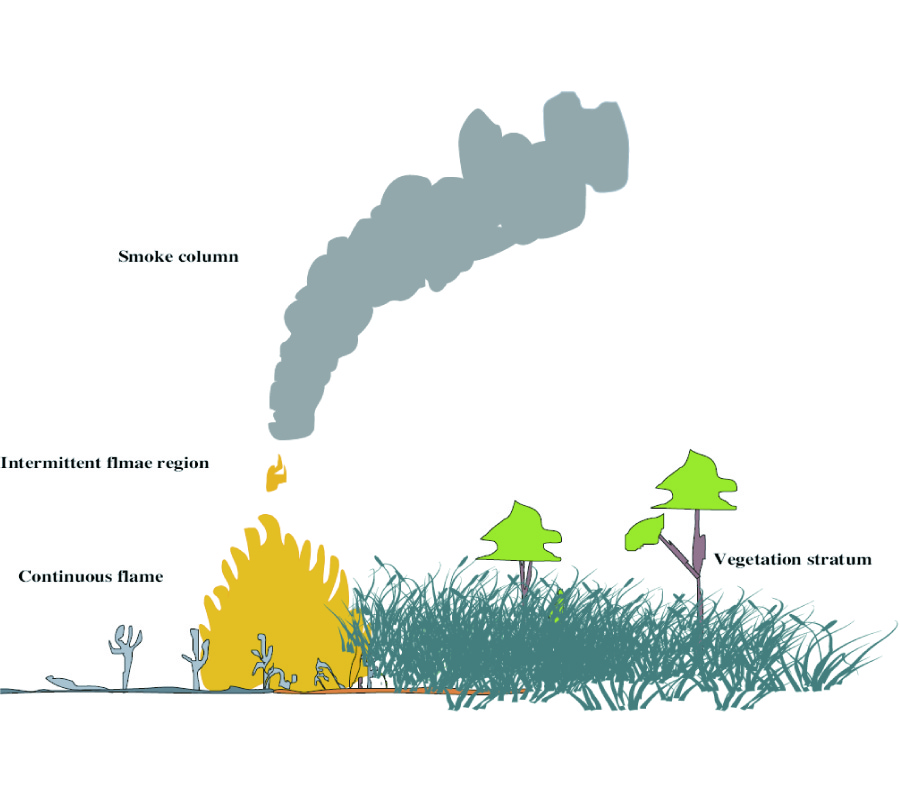 Wildfires are uncontrolled exothermic oxidation of vegetation. Flame combustion temperatures could be in excess of 1600 K. Under the high temperature environment, plants' organic structure crumbles to release omnipresent alkali nutrients into the combustion zone. The alkali based compounds thermally decomposed to constituent atoms which ultimately ionised to give ions and electrons. The presence of electrons in the flame lowers its refractive index, thereby creating a medium of spatially varying refractive index. In the medium, incident radio waves change speed and are consequently deflected from their original path. The refraction has an effect of decreasing signal intensity at a targeted receiver which is at the same height as a collimated beam transmitter which is at a considerable distance away from the former. A numerical experiment was set to investigate the sub refractive behaviour of a very high intensity eucalyptus wildfire (90 MWmâˆ’1) plume using two dimensional (2D) ray tracing scheme. The scheme traces radio rays as they traverse the plume. The ratio of number rays in a collimated beam reaching the targeted receiver to number of rays leaving the transmitter is used to calculate signal intensity loss in decibels (dB) at the receiver. Assuming an average natural plant alkali (potassium) content of 0.5%, attenuation (dB) was observed to be factor of both propagation frequency and temperature at the seat of the fire plume; and only of temperature at cooler parts of the plume. The 2D ray tracing scheme predicted a maximum attenuations of 14.84 and 5.47 dB for 3000 and 150 MHz respectively at 0.8 m above canopy-flame interface over propagation path of 48.25 m. An attenuation of 0.85 dB was predicted for frequencies from 150-3000 MHz over the same propagation distance at plume height of 52.8 m above ground. 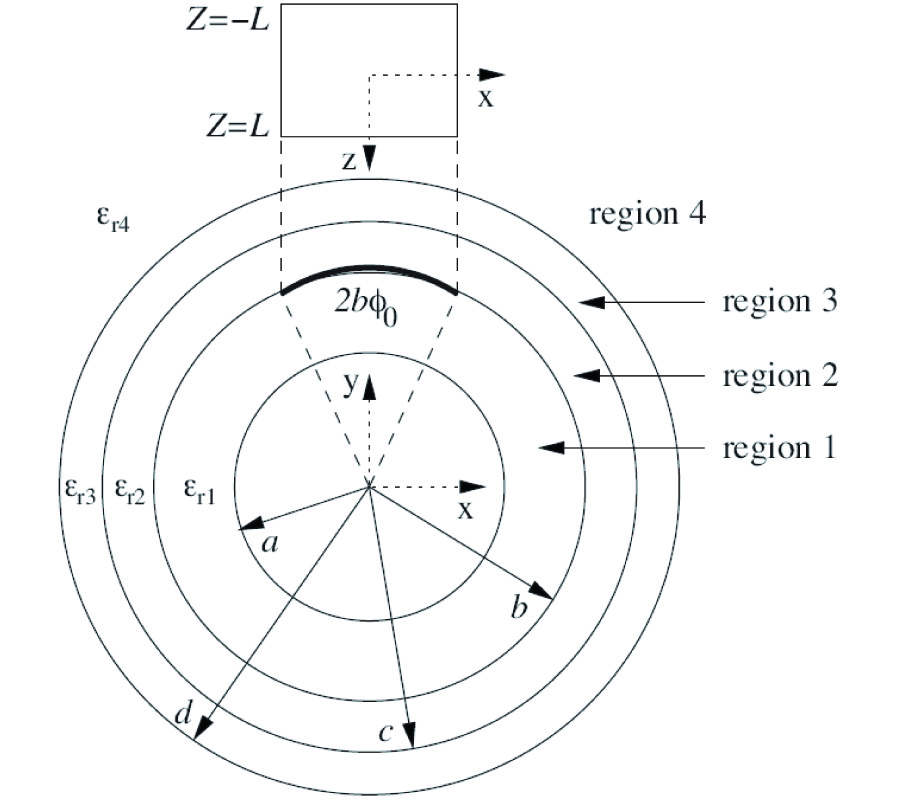 Analysis of Radiation from a Cylindrical-Rectanguar Microstrip Patch Antenna Loaded with a Supersrate and an Air Gap, Using the Electric Surface Current Model

Radiation from a superstrate loaded cylindrical-rectangular microstrip patch antenna with an air gap between the substrate and the superstrate, is analyzed using the full-wave approach and the electric surface current model. Results are presented in the form of normalized radiation patterns for various thicknesses of the air gap and also for superstrates made of lossy dielectric material, to show the effects of these on the radiation from the antenna. Both axialand azimuthal current elements are considered. 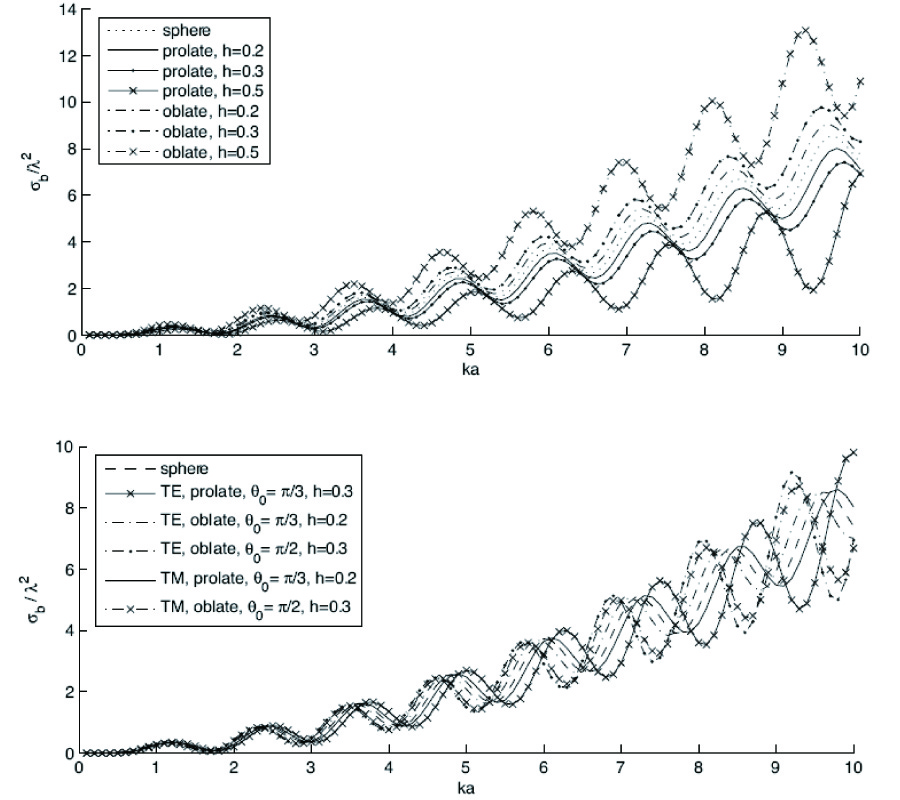 The scattering of a plane electromagnetic wave by a perfectly conducting prolate or oblate spheroid is considered analytically by a shape perturbation method. The electromagnetic field is expressed in terms of spherical eigenvectors only, while the equation of the spheroidal boundary is given in spherical coordinates. There is no need for using any spheroidal eigenvectors in our solution. Analytical expressions are obtained for the scattered field and the scattering cross-sections, when the solution is specialized to small values of the eccentricity h = d/(2a), (h<<1), where d is the interfocal distance of the spheroid and 2a the length of its rotation axis. In this case exact, closed-form expressions, valid for each small h, are obtained for the expansion coefficients g(2) and g(4) in the relation S(h) = S(0)[1 + g(2)h2 + g(4)h4 + O(h6)] expressing the scattering cross-sections. Numerical results are given for various values of the parameters. 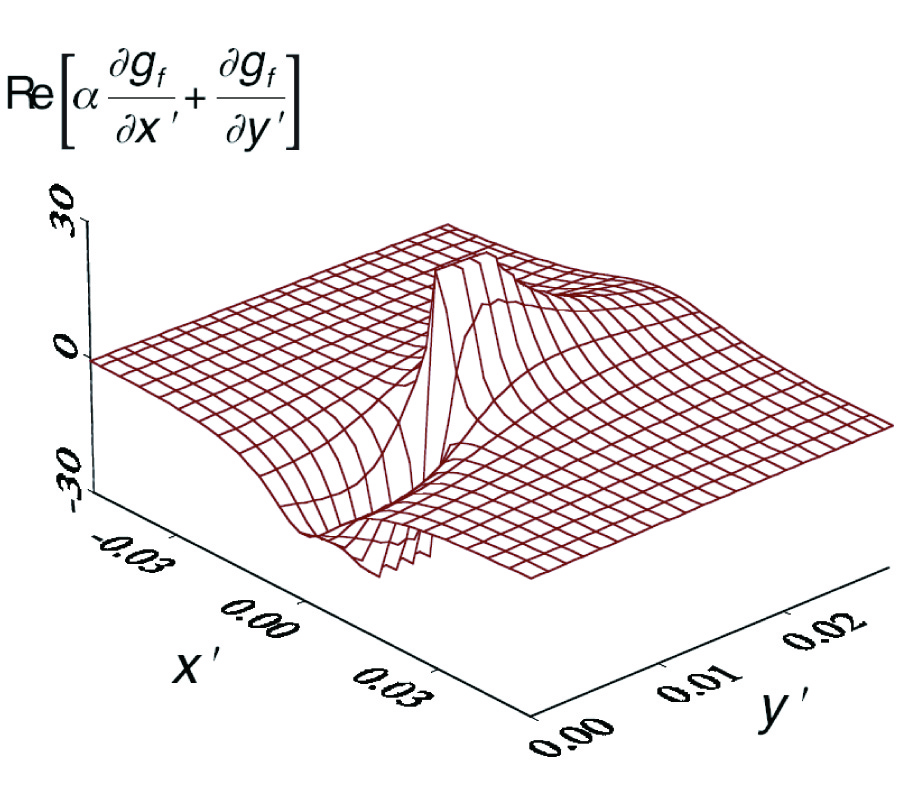 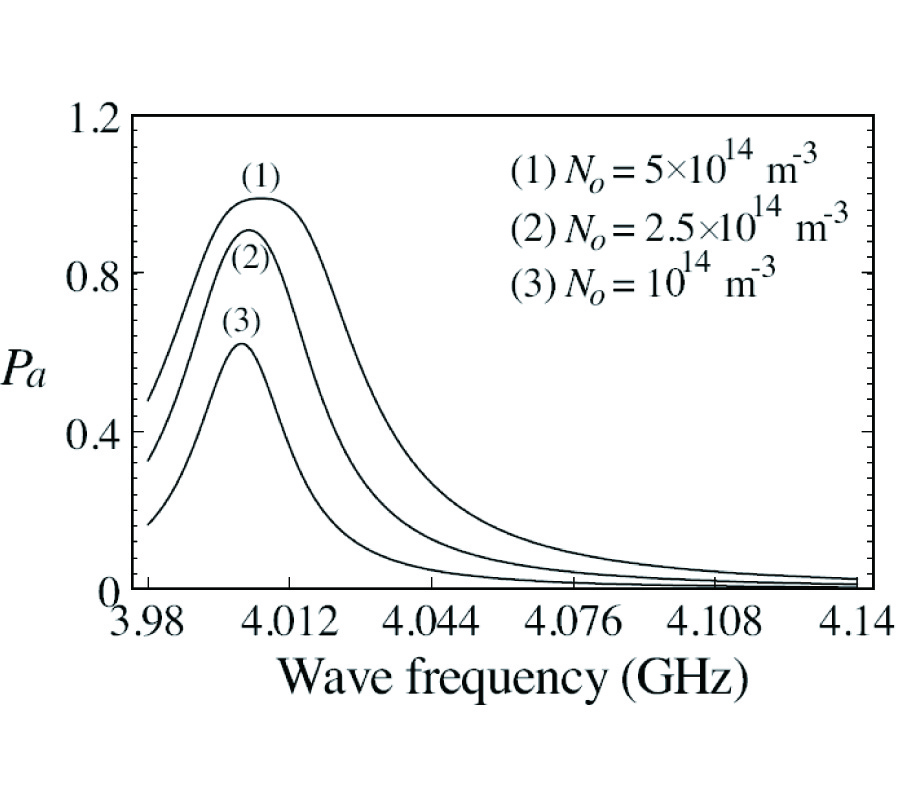 Ezzeldin A. Soliman, A. Helaly, and A. Megahed

This paper aims at developing a technique to calculate the reflection, absorption, and transmission of electromagnetic waves by a bounded plasma region. The model chosen for this study is a magnetized,steady-state, two-dimensional,non uniform plasma slab, which is presented by a number of parallel flat layers. It is assumed that the electron density is constant in each layer such that the overall electron density profile across the slab follows any prescribed distribution function. The proposed technique is referred to as Scattering Matrix Model (SMM). The fields in each layer are written in the form of summation of the appropriate eigen functions weighted by unknown scattering coefficients. These coefficients are determined via the application of the appropriate boundary conditions at each interface. The effect of varying the wave frequency and the plasma parameters on the reflected,transmitted,and absorbed powers are presented and discussed.

In this paper, finite difference frequency domain (FDFD) formulation has been developed for the analysis of electromagnetic wave interaction with chiral materials, and the validity of the formulation for three dimensional scattering problems has been confirmed by comparing the numerical results to exact or other numerical solutions. The influences of the chirality on the scattered field components are investigated. Numerical results for bistatic radar cross section (RCS) are presented and compared to reference solutions and it is found that the proposed FDFD method shows good agreement. It is realized that the presented method is relatively easy to program and can be applied to a wide variety of problems of complex and composite structures efficiently.