A multiband CPW-fed triangle-shaped monopole antenna for wireless applications covering 2.4- and 5 GHz WLAN bands and 3.4 GHz WIMAX band in IEEE 802.16 is proposed. Prototype of the proposed antenna have been constructed and tested. The experimental results show that the antenna can provide two separate impedance bandwidths of 140MHz (about 5.8% centered at 2.43 GHz) and 3100MHz (about 61.4% centered at 4.91 GHz), which meet the required bandwidths specification of 2.4/5 GHz WLAN and 3.4 GHz WIMAX standard. Good omnidirectional radiation in the desired frequency bands has been achieved. The proposed antenna with relatively low profile is suitable for multiband wireless applications.

Electromagnetic waves scattering in turbulent anisotropic collision magnetized ionospheric plasma is investigated using complex geometrical optics approximation. Correlation function of the phase fluctuations of scattered radiation is obtained taking into account both electron density and magnetic fields fluctuations. The features of the angular power spectrum of scattered radiation are investigated analytically and numerically. The expressions of broadening of the spatial spectrum have been obtained for both powerlaw and anisotropic Gaussian correlation functions of electron density fluctuations. Gaussian spectral function takes into account the axial ratio of the field-aligned irregularities and the angle of inclination of prolate irregularities with respect to the external magnetic field. The variance of the phase and scintillation level of scattered radiation are calculated numerically for F-region irregularities of the ionosphere. The conditions of non-fully and fully developed diffraction patterns have been determined.

One of the most popular methods to solve a time-domain integral equation (TDIE) is the marching-on in time (MOT) method. Recently, a new method called marching-on in degree (MOD) that uses Laguerre polynomials as temporal basis functions has been developed to eliminate the late time instability of the MOT method. The use of an entire domain basis for the time variable eliminates the requirement of a Courant condition, as there is no time variable involved in the field calculation. This is possible as in the procedure the time and the space variables can be separated analytically. A comparison is presented between these two methods from the standpoint of formulation, stability, cost, and accuracy. Numerical results are presented to illustrate these features in the comparison.

A peculiarity of counter-propagating energy-flows in nonlinear left-handed metamaterials (LHMs) is investigated for the case when the frequency of fundamental wave is in the negativeindex range and second-harmonic wave is in the positive-index range. Based on the electromagnetic theory,the comparisons of Manly-Rowe relations for nonlinear materials and process of secondharmonic generation under phase-matching condition in LHMs and RHMs are shown separately. That a surface of nonlinear left-handed metamaterials operates as an effective mirror which reflects the energy in form of second harmonics is demonstrated. Numerical results of fundamental and second-harmonic field intensity distributions are in agreement with theoretical results.

In this paper, the effects of the internal resonances of an open conducting spherical enclosure with circular aperture on its radar cross section (RCS) and shield effectiveness (SE) are studied over a wide frequency band. The sizes of the spherical enclosures investigated in the present work range from electrically small (perimeter is less than the wavelength) to electrically large (perimeter is up to ten times the wavelength). It is shown that for such an enclosure, both the RCS and SE, as functions of frequency, have sharp spikes, minima, or maxima at the resonant frequencies corresponding to the internal modes of the closed conducting sphere. Principal and higher order modes are considered. The effects of the aperture width on the perturbation of the field inside and outside of the spherical enclosure, the near field outside the cavity, the RCS and the SE are presented over a wide range of frequency. It is shown that the sharpness and amplitude of the spikes, minima, or maxima of the RCS and SE are decreased with increasing the aperture width. Also, the resonant frequencies of the enclosed spherical cavity are shifted with increasing the aperture width. For the purpose of verifying the accuracy of the obtained results for the SE of an open spherical enclosure at resonance, the obtained field configurations and distributions inside a spherical enclosure of a small aperture are compared to those of the spherical cavity modes which have already been obtained analytically. Also, some of the results concerning the RCS of a spherical enclosure are compared to other published results.

Based on the concept of charge moment tensor T̃ which is different from the existent electric multiple-moment, and the concept of principal axes and principal-axis scalar charge moment, the condition of zero magnetic moment for an arbitrary rotational body with given charge distribution has been given explicitly in this paper. We find the loss of positive definiteness of T̃ is its most important characteristic which forms a sharp contrast with that of its mechanic counterpart - the positive definite inertia tensor of rigid bodies. Meanwhile the relationship between the quadric distributive law of magnetic moment and the parameters of tensor T̃ is discussed in detail. Accordingto the theory of analytic geometry, we give a series of test formulae, classify and enumerate every kind of possible quadric in a table. Finally, conclusion is given that any rotation axis which passes through origin O and alongwith any of the asymptotic line of the quadric (hyperboloids or hyperbolic cylinders) can lead to a vanishingmag netic moment.

Abstract-A new method to improve the gain of monopole and patch antenna with one dimension and two dimension metamaterial structures is presented. The analytical permittivity models of metamaterial are derived using the transmission line method. Then the monopole and patch antenna with the metamaterial are fabricated and measured. The experimental results show that this method is effective and these structures can realize congregating the radiation energy, thus the gain of these antennas with metamaterial increase greatly compared with the conventional ones.

A novel microstrip slot antenna for UWB (Ultra Wideband) applications is proposed. A square ring slot antenna is filledb y an H shape slot as a parasitic element. This structure is fed by a single microstrip line with a fork like-tuning stub. Experiments are carriedout to investigate its return loss, its radiation andits time domain behavior, which exhibit good radiation pattern and impedance bandwidth over the entire band of frequency. Time domain consideration also exhibits that this antenna can be used with short pulses. Extended from the proposed antenna, one advanced bandnotched( 5.5-7 GHz) design is also presentedas a desirable feature for UWB applications.

Ghanshyam Singh and B. N Basu

Abstract-This article discusses the gain-frequency characteristics of most competing modes of azimuthally periodic vane-loaded cylindrical waveguide interaction structure for gyrotron traveling wave tube (gyro- TWT) amplifier, which is the device of increasing importance because of its high-power and broad bandwidth capabilities. Vane-loading is identified as a means to achieve a low-beam energy, high-harmonic, low-magnetic field, mode-selective and stable operation of a gyro- TWT, and thus the development of a simple approach to the analysis of a vane-loaded gyro-TWT have been identified as a problem of practical relevance. 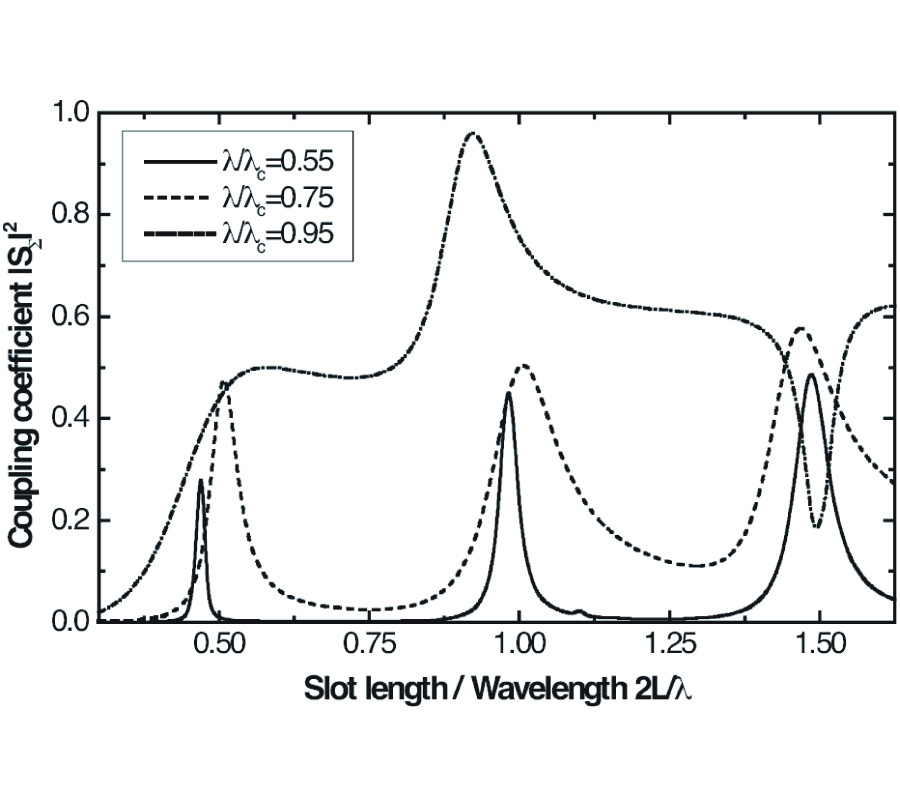 Analytical Methods in Theory of Slot-Hole Coupling of Electrodynamic Volumes

Structural Parameters in the Formation of Omnidirectional High Reflectors

This paper investigates the characteristics of electromagnetic wave propagation in biaxially anisotropic left-handed materials (BA-LHMs) theoretically and numerically. We discuss under what conditions the anomalous refraction or reflection will occur at the interface when a plane wave passes from one isotropic right-handed material into another BA-LHM. Meanwhile the refraction angle of the wave vector and that of the Poynting power are presented when the anomalous refraction takes place. According to the theoretical analysis,sev eral sets of constitutive parameters of BA-LHMs are considered. Then the anomalous refraction or reflection of the continuous-wave (CW) Gaussian Beam passing from free space into BA-LHMs are simulated by the finite difference time domain (FDTD) method based on the Drude dispersive models. The simulated results are in agreement with theoretical results,which validates the theoretical analysis.

An efficient method based on bees algorithm (BA) for the pattern synthesis of linear antenna arrays with the prescribed nulls is presented. Nulling of the pattern is achieved by controlling only the amplitude of each array element. Numerical examples of Chebyshev pattern with the single, multiple and broad nulls imposed at the directions of interference are given to show the accuracy and flexibility of the BA.

Asup erstrate layer is used to enhance the directivity of the small radiation sources such as Microstrip Patch Antennas. In this paper, we use square loop frequency selective surface (SLFSS) configuration to design the superstrate layer. To compact the structure, we propose a new single layer square loop FSS configuration that operates in two frequency bands such as multi-layer SL-FSS. Simulation results are shown to have good agreement with experimental results.