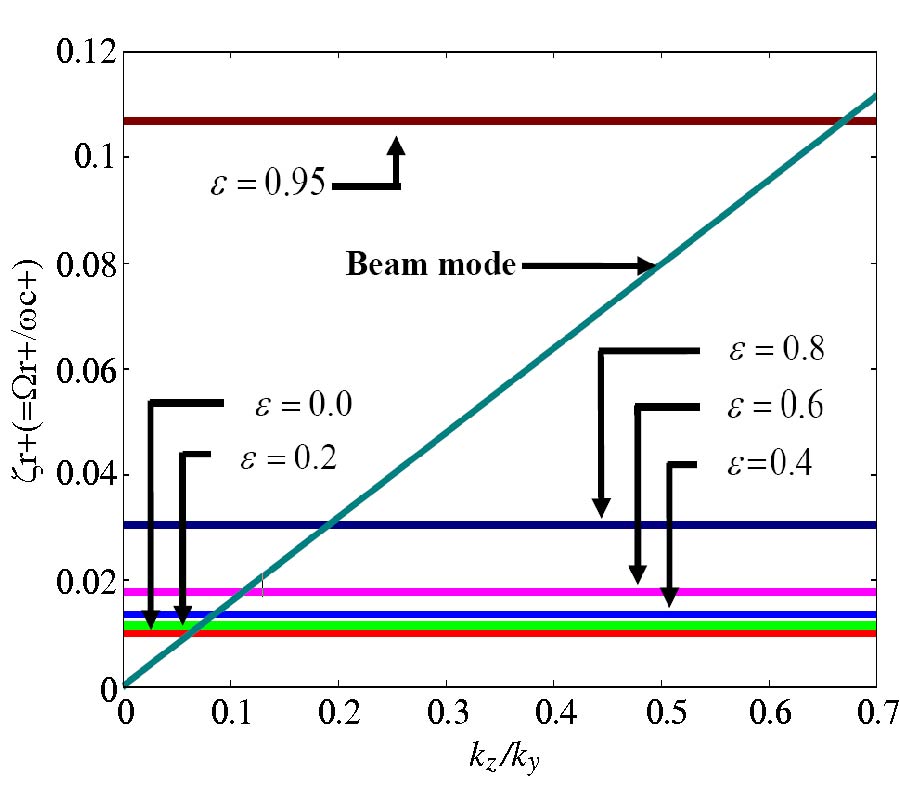 Design, optimization, and performance analysis of a three-phase field-excited flux switching (FEFS) motor to be employed for the future hybrid electric vehicle (HEV) drive applications is investigated in this paper. The stator of designed motor made of electromagnetic steels is composed of unique field mmf source and armature coils while a rotor is made of iron stack. This design has been evaluated in order to achieve power and torque density higher than 3.50 kW/kg and 210 Nm, respectively, so as to compete with the interior permanent magnet synchronous (IPMS) motor commonly installed in HEV. Given its robust rotor structure, the maximum achievable motor speed went up to 20,000 rpm. To perfect the motor design, a deterministic optimization approach was applied to meet the stringent performance requirements. In addition, experimental analyses were carried out to confirm the effectiveness of the proposed motor. Positively, the proposed FEFS motor has proved to be a suitable candidate of non-permanent magnet motor for efficient and safe HEV drive. 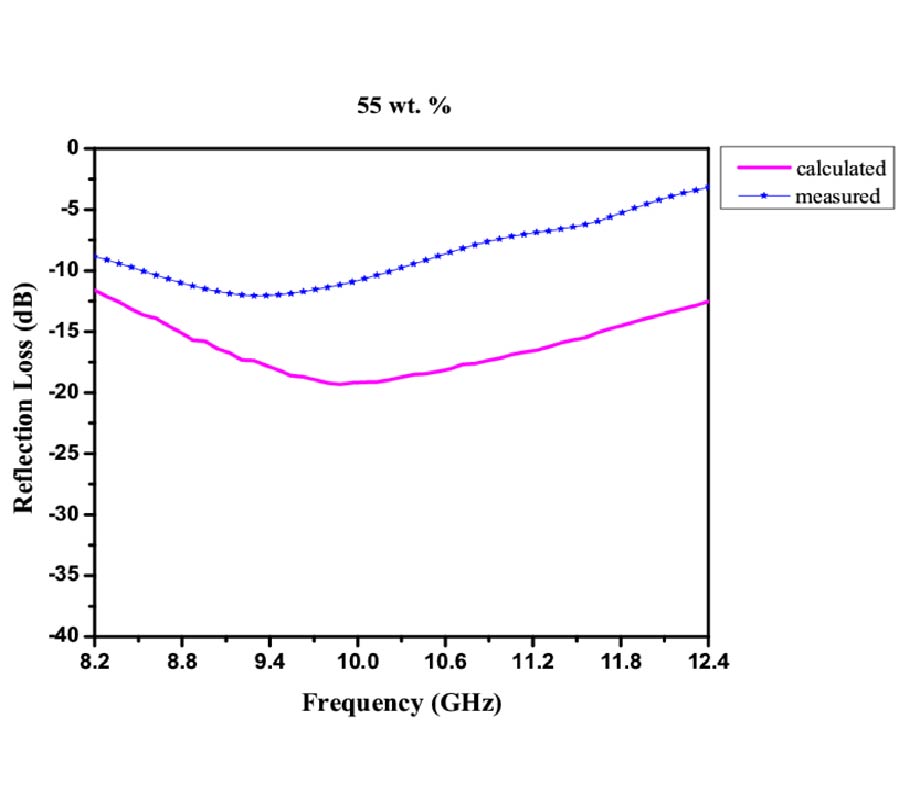 A wide-band single-layer EMI shielding material for X-band is developed using an M-type strontium hexa-ferrite nanoparticle filler in LLDPE matrix. Strontium hexa-ferrite nanoparticles with crystalline size of 25.8 nm are obtained by annealing at 850˚C. LLDPE allows a higher wt. % of ferrite inclusions enabling enhanced dielectric and magnetic losses. A peak absorption of 99.39% is achieved at 10.21 GHz when the filler weight in a 3 mm thick sample is adjusted to 60 wt.% while a wide -10 dB absorption bandwidth of 3.36 GHz centered around the same frequency is obtained. The density of the composite is 1.36 g/cm3 and shows negligible water absorption. 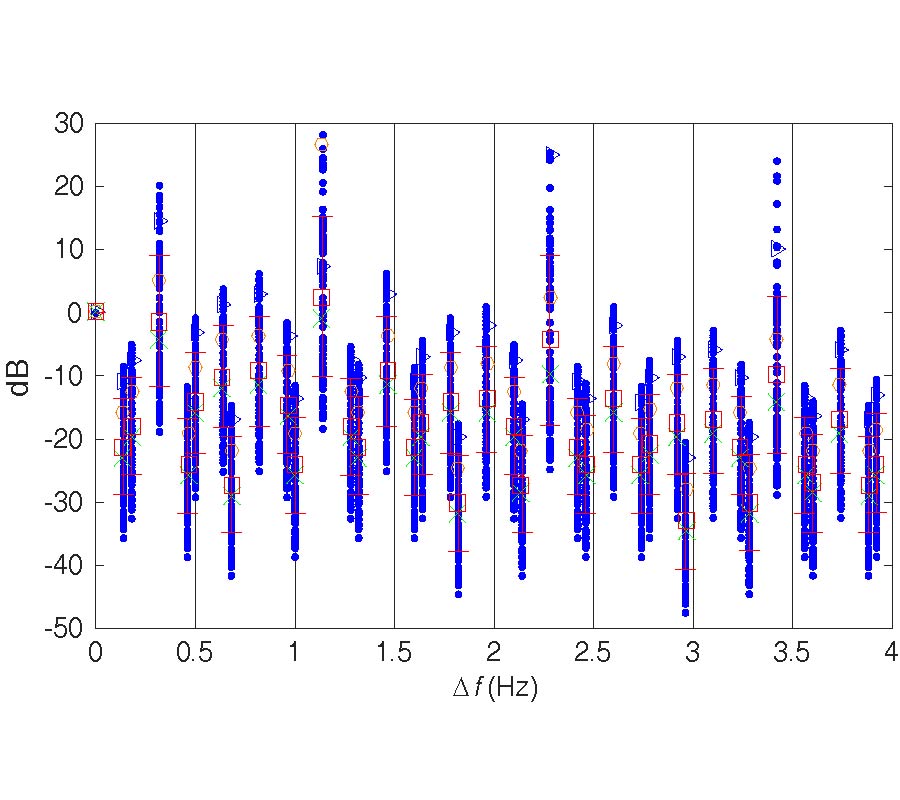 The moving chest wall imparts a delay modulation onto the reflected IR-UWB radar signal, making the radar return a nonlinear function of chest wall displacement. Existing theoretical spectral models of the IR-UWB radar reflections from the human chest wall have restrictive assumptions that preclude realistic modeling of chest wall displacement and assume an aliased version of the radar signal. This paper presents novel theoretical analysis of the un-aliased spectrum, without the restrictive assumptions. Potential applications not specifically treated in this paper, but illustrative of the novelty and broader scope of the presented analysis, include heart-induced displacements that are realistically more bursty in nature and breathing-induced displacements consistent with, for example, non-unity inspiration-to-expiration ratios characteristic of asthma; neither of these could be analyzed using previous models. As well known, the un-aliased spectrum cannot generally be recovered from the aliased spectrum. In particular, the paper shows that the clusters of the non-aliased spectrum are not just scaled versions of each other; rather they have complex variations that if measurable, could enable estimation of parameters such as displacement amplitude; such variations are not apparent in the existing aliased spectrum model, which has just one cluster. This paper analyzes the degree to which the aliased model di↵ers from the non-aliased model. The paper also addresses some practical aspects of the spectral model, such as the number of significant components in a spectral cluster and computational complexity of the theoretical model. 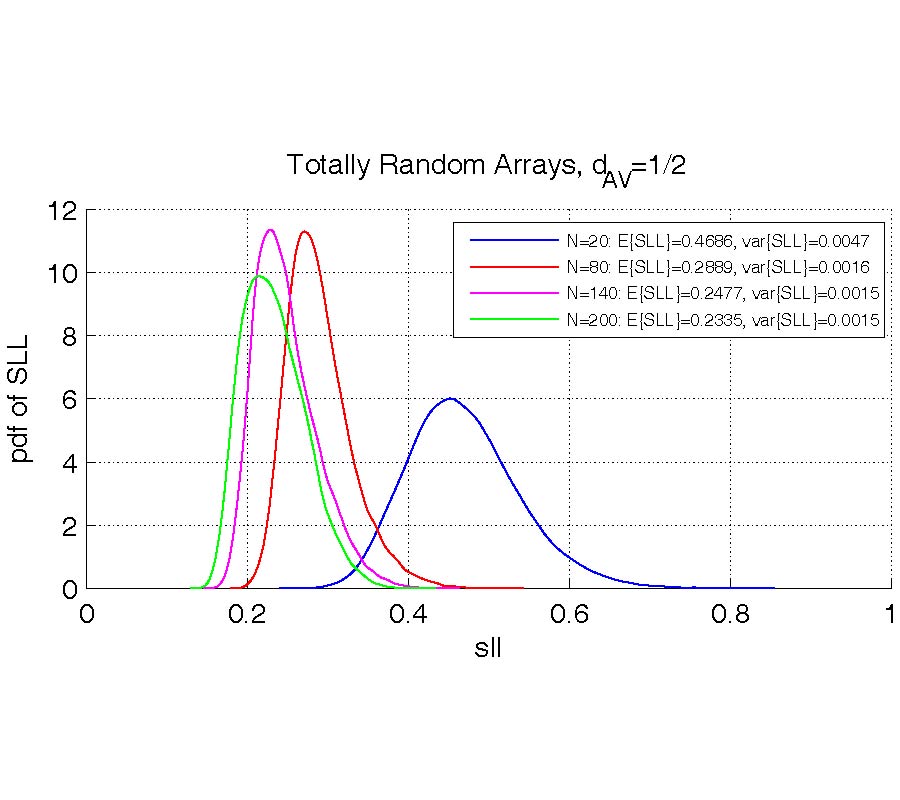 In this work, four types of random arrays are compared. In particular, the mean and variance of the array factor are derived. This provides a partial statistical characterisation that allows pointing out some important aspects of random arrays and link them to the number of elements and array aperture. In the absence of a simple and effective analytical apparatus, here great importance is also given to the experimental aspect, especially as far as the side-lobe level is concerned. To this end, Monte Carlo simulations are run to experimentally build the side-lobe distribution as a function of the number of radiators and the average spacing between two adjacent radiators. The obtained results show that random arrays where one is free to impose constraints on the minimum spacing between adjacent elements can obtain performance analogous to those achievable by other schemes which do not put such constraints. However, the former are preferable because they are able to zero the probability that adjacent radiators are separated with less than a certain minimum distance and this allows the mitigation of mutual coupling effects. 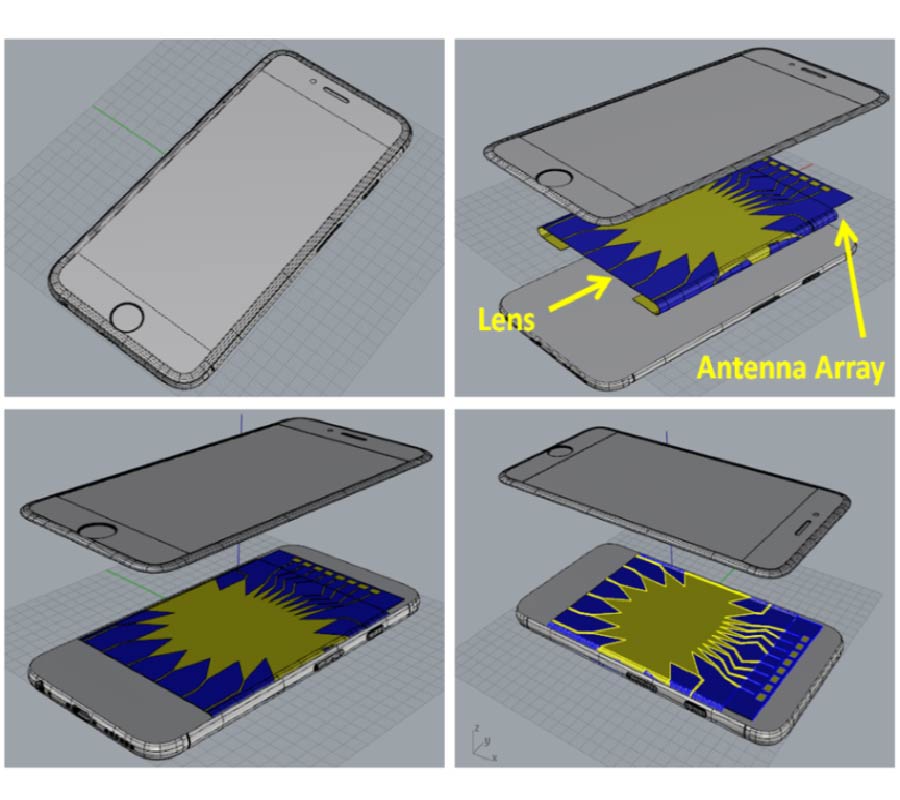 The development of modern communication devices for the latest technologies such as 5G has brought the millimeter wave technology into the spotlight because it offers higher data rates and bandwidth. Since highly directional transmissions are necessary for communication in these frequencies due to high path loss and atmospheric absorption, the use of adaptive antennas is inevitable. Rotman lenses have long been used as analog beam forming networks to support linear array antennas for electronic scanning. Their broad bandwidth and planar structure make them ideal for a variety of applications. However, their overall dimensions can be prohibitive especially for large scan angles. In this paper, we propose a few compact configurations that reduce the overall dimensions of Rotman lens as much as 50% without degrading its performance.

This paper presents the analytical design and numerical performance evaluation of novel V-band millimetre-wave (mm-wave) beamforming networks (BFNs), based on the Rotman lens array feeding concept. The devices are intended for operation in the unlicensed 60-GHz frequency band. The primary objective of this work is to study the feasibility of designing flexible V-band beamformers, based on liquid-crystal polymer (LCP) substrates. The planar Rotman lens device has been initially developed, and the output performances, in terms of the scattering parameters and accuracy, have been analysed. This is further continued with the detailed designs of the Rotman lens BFNs based on the four different proposed flexural cases, namely the concave-axial bending, the convex-axial bending, the concave-circumferential bending, and the convex-circumferential bending. Each of the flexures has been analysed, and the performance in terms of the surface currents and phase distributions, as the primary functionality indicators, has been presented. The presented flexible beamformers exhibit significant characteristics to be potentially employed as low-cost and efficient units of the mm-wave transceivers with the in-built beam steering capabilities for the conformal wireless subsystems. 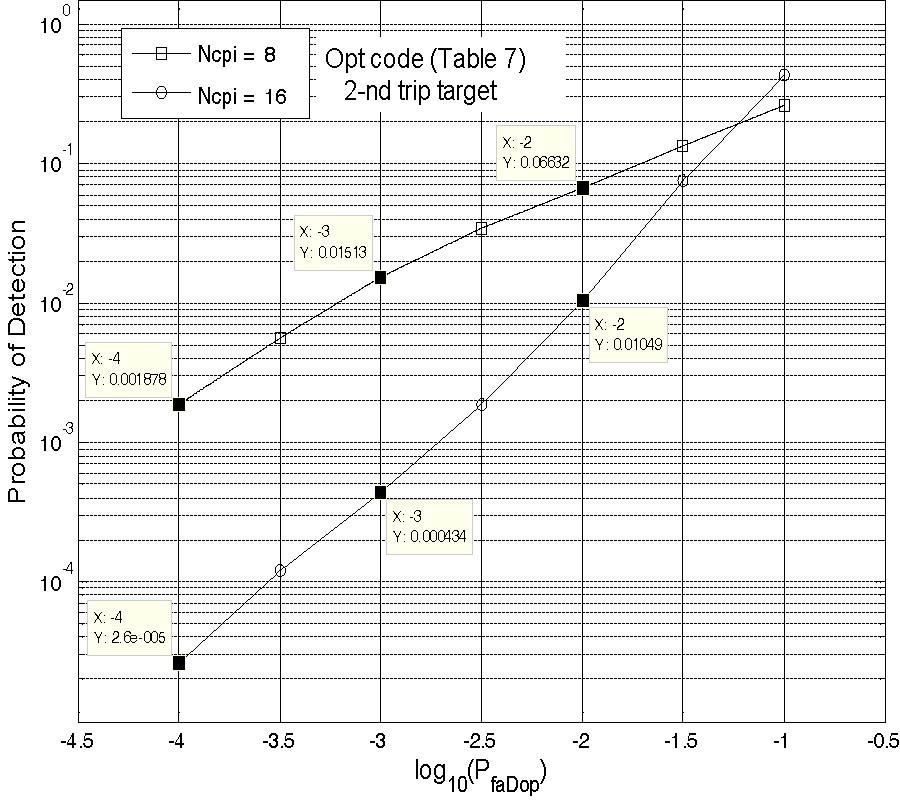 Anatolii A. Kononov and Jonggeon Kim

The paper introduces a new method for eliminating multiple-time-around detections in coherent pulsed radar systems with single constant pulse repetition frequency. The method includes the phase modulation of transmit pulses and corresponding phase demodulation at reception, which is matched to signals from the unambiguous range interval, and subsequent coherent integration followed by successive CFAR processing in range and Doppler domains. The performance of the proposed method is studied by means of statistical simulations. It is shown that the elimination performance can be essentially improved by optimizing the transmit phase modulation code. The optimization problem is formulated in terms of least-square fitting the power spectra of multiple-time-around target signals to a uniform power spectrum. Several optimum biphase codes are designed and used in the performance analysis. The analysis shows that the method can provide very high probability of elimination without noticeable degradation in the detection performance for targets from the unambiguous range interval. 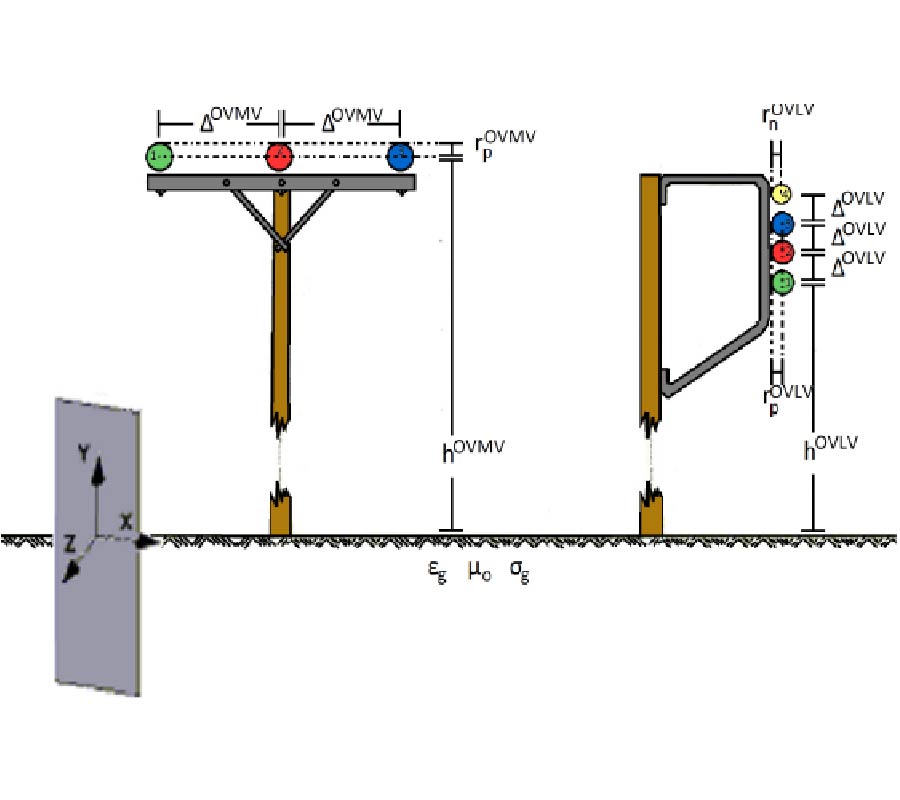 This paper considers the broadband performance of distribution broadband over power lines (BPL) networks when a new rened theoretical coupling scheme computation module (CS2 module) is applied. The broadband performance of distribution BPL networks is investigated in terms of their channel attenuation and capacity in the 3-88MHz frequency range, which is the typical operating frequency band of BPL technology. The analysis and relevant numerical results outline the important attenuation and capacity improvement of distribution BPL networks when CS2 module is applied.