Hierarchical (H-) matrix based fast direct and iterative algorithms are presented for acceleration of the Method of Moment (MoM) solution of the Surface-Volume-Surface Electric Field Integral Equation (SVS-EFIE) formulated for scattering and radiation problems on homogeneous dielectric objects. As the SVS-EFIE features the product of the integral operator mapping the tangential equivalent electric current on the surface of the scatterer to the volume polarization current and the integral operator mapping the volume polarization current to the tangential component of the scattered electric field, its MoM discretization produces the product of non-square matrices. Formation of the non-square H-matrices for the MoM discretized integral operators is described. The algorithms for arithmetics pertinent to the product of the non-square H-matrices are explained. The memory and CPU time complexity scaling of the required H-matrix operations are analyzed in details and verified numerically. The numerical validation of the proposed algorithm is provided for both the lowloss dielectric objects as well as for the high-loss biological tissues found in the bioelectromagnetics applications. The numerical experiments demonstrate a signicant reduction of memory usage and a considerable speedup for CPU time compared to nave MoM, thus, enabling solution of the large-scale scattering and radiation problems with the SVS-EFIE. 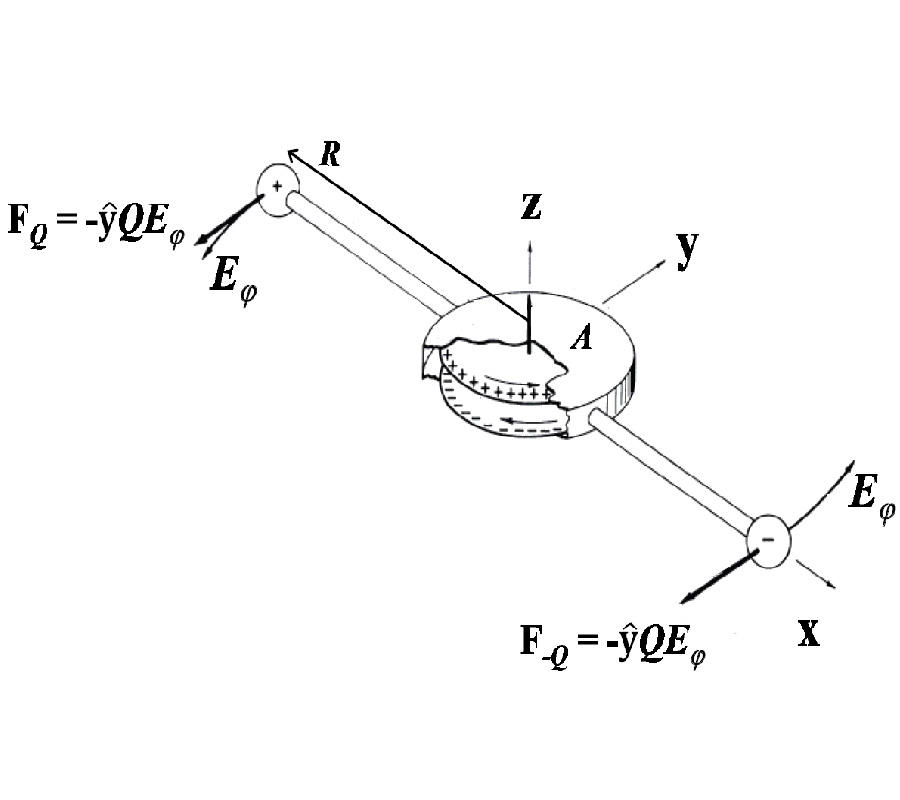 The concept of hidden momentum is reviewed, and the first rigorous derivation from Maxwell's equations is provided for the electromagnetic force on electrically small perfect electric conductors of arbitrary shape in bandlimited but otherwise arbitrarily time-varying fields. It is proven for the Amperian magnetic dipoles of these perfect conductors that a "hidden-momentum" electromagnetic force exists that makes the force on these time varying Amperian magnetic dipoles equal to the force on magnetic-charge magnetic dipoles with the same time varying magnetic dipole moment in the same time varying externally applied fields. The exact Mie solution to the perfectly conducting sphere under plane-wave illumination is used to prove that the expressions for the total and hidden-momentum forces on the arbitrarily shaped electrically small perfect conductors correctly predict the forces on perfectly conducting spheres. Remarkably, it is found that the quadrupolar fields at the surface of the sphere are required to obtain the correct total force on the sphere even though the quadrupolar moments are negligible compared to the dipole moments as the electrical size of the sphere approaches zero. 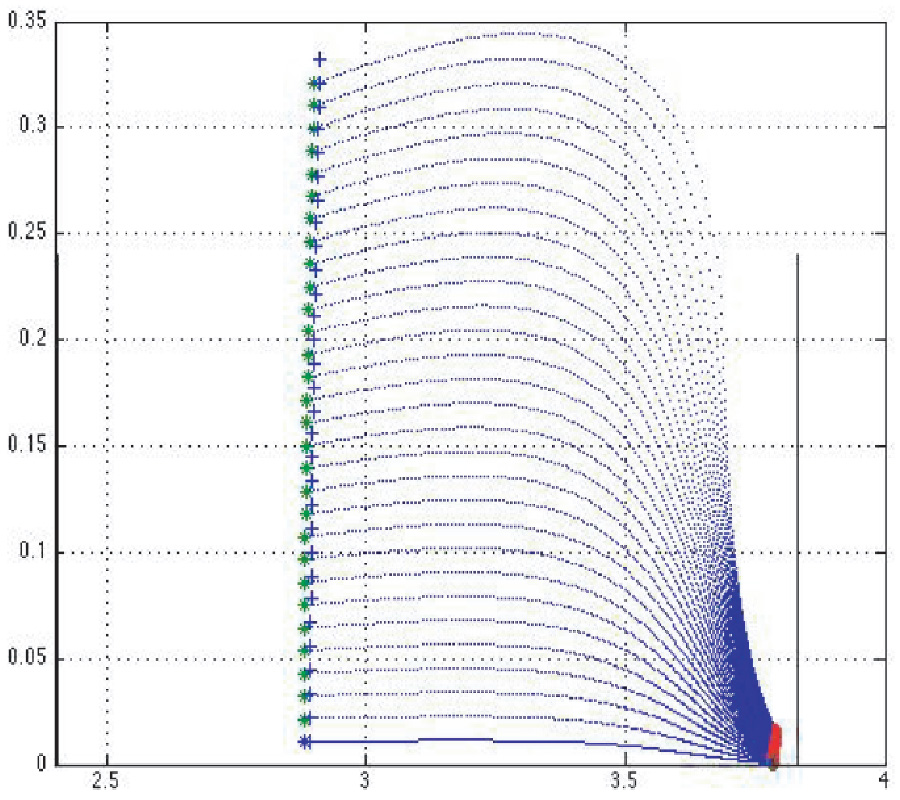 Existence of symmetric complex waves in a dielectric rod (DR) - a dielectric waveguide of circular cross section - is proved by analyzing functional properties of the dispersion equations (DEs) using the theory of functions of several complex variables and validating the existence of complex roots of DE. A closed-form iteration procedure for calculating the roots in the complex domain supplied with efficient choice of initial approximation is proposed. Numerical modeling is performed with the help of a parameter-differentiation method applied to the analytical and numerical solution of DEs. 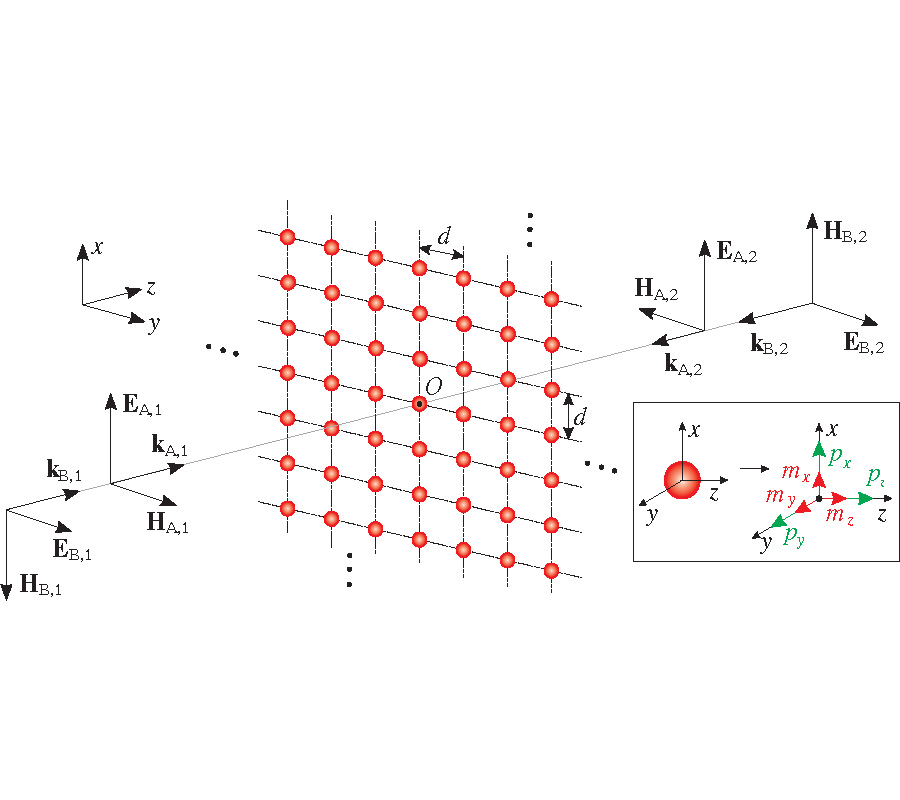 A class of rigorous formulas for the efficient extraction of the full polarizability matrix of electrically small particles is introduced in this paper. After the dipole approximation of the scatterer, under study, the latter is placed on a two-dimensional square array, illuminated by four normally incident plane waves, and eventually its polarizabilities are expressed in terms of induced dipole moments. Then, by applying an equivalent surface model for the array, the induced dipoles are calculated as a function of the reflection/transmission coefficients from the array. Lastly, the combination of the previous formulations leads to the final expressions for the polarizability matrix of the particle. In order to verify the featured methodology, the extracted polarizabilities are involved in radar cross section and total radiated power calculations for various incidences and are compared with their simulated counterparts.

Microwave radar imaging is increasingly being used in infrastructure monitoring applications due to its low cost, rapid measurement time, non-contact characteristics, and ability to penetrate nonmetallic media. An appropriate waveform design must be designed to obtain accurate information on the targets observed or the features being probed. Ultrawideband (UWB) radio frequency (RF) noiselets are excellent candidate waveforms in view of their multiresolution and interference rejection features. In this paper, a waveform optimization approach for UWB noiselet waveforms is described to achieve high peak-to-sidelobe ratio (PSLR) to enhance imaging capabilities. Synthetic aperture radar (SAR) scanning for microwave imaging is introduced after analyzing the essential microwave approaches for the multilayered structure. Image reconstruction using SAR scanning is performed for various multilayered structures and quasi-3D images of these structures are presented for nondestructive testing and evaluation (NDT&E) applications. 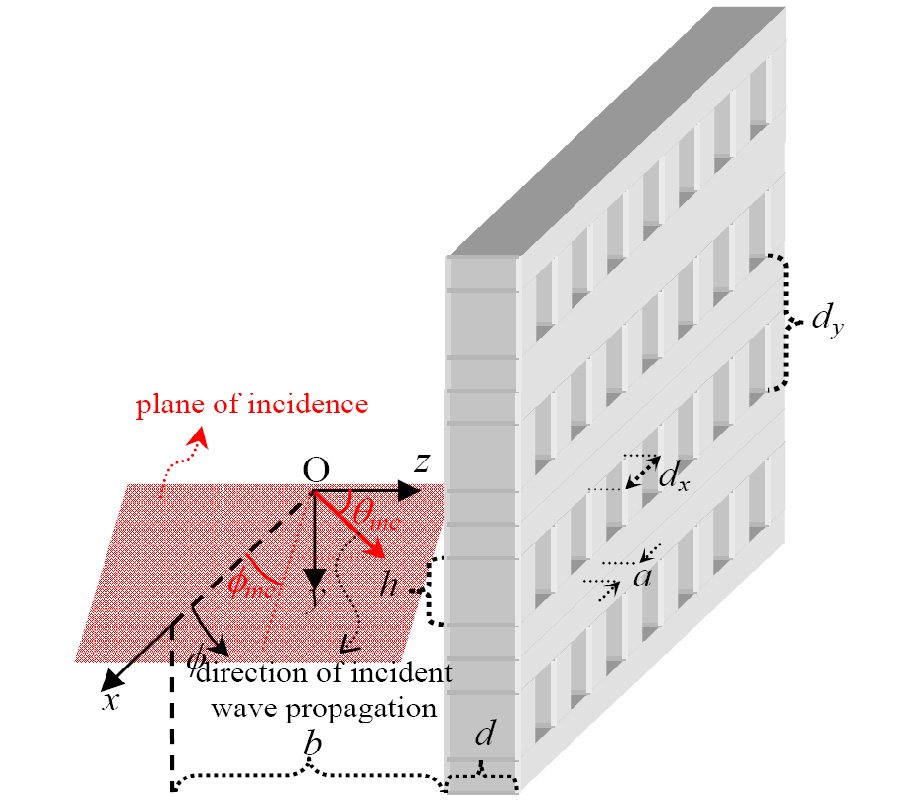 An array of rectangular holes pierced through a conducting screen is treated herein by a rigorous full-wave modal analysis using the moment method entailing Green's functions for rectangular cavities and planar multilayer structures in the spectral domain. Unexpectedly strong diffusions of incident plane waves are observed even at frequencies where the size of each hole is considerably less than the wavelength, posing a transmission efficiency that exceeds unity and thus leading to extraordinary transmission since this defies classical aperture diffraction theory. This paper fortifies the present understanding of the role surface plasmon polaritons (SPP) play in explaining this phenomenon, by using surface-wave dispersion and Floquet lattice diagrams to link up with the peaks in the transmission spectra. The incidence angle and polarization of the irradiation are taken into account in this work.

We revisit the standard electromagnetic problem wherein wave propagation within a uniform, lossless dielectric is interrupted by a dissipative slab of finite thickness. While such a problem is easily solved on the basis of interface field continuity, we proceed to treat it here under the viewpoint of radiative self-consistency, with effective current sources resident only within the slab interior and gauged by ohmic/polarization parameter comparisons against those of the reference, exterior medium. Radiative self-consistency finds its natural expression as an integral equation over the slab interior field which, once solved, permits a direct, fully constructive buildup, both up and down, of the reflected/transmitted field contributions, without any need for ascertaining such quantities implicitly via the enforcement of boundary conditions. The persistent cadence of solution steps in such integral-equation problems asserts itself here, too, in the sense that it leads, first, to an exact cancellation, left and right, of that interior, unknown field, and second, that it brings in still other contributions of a reference medium variety, of which it is required that they, and only they, balance the incoming excitation. Balancing of this latter sort provides indeed the linear conditions for slab field determination. The two-step solution pattern thus described may be regarded as a manifestation at some remove of Ewald-Oseen extinction, even though the analytic framework now on view differs fundamentally from proofs elsewhere available. We go on to solve the several balancing equations by direct, vector manipulation avoiding all recourse to large, unwieldy determinants, and then offer a partial confirmation by exhibiting a canonical, boundary value counterpart in the special case of perpendicular incidence. Following all of this, in an appendix, we allow the receptor, downstream half space to differ from that wherein the excitation had been launched and which continues to serve as the reference medium. Effective currents are now found not only within the slab proper, but also throughout an entire half space, necessitating a suitable generalization of the underlying integral equation, and a provision, during its solution, of cross-talk, both up and down, between slab and the half space now contributing as a radiation source. We provide in this appendix a fairly accelerated presentation of these generalized features, but with all logical details nevertheless fully displayed in plain view. The integral equation radiative self-consistency method is, to our way of thinking, physically far more satisfying than the prevailing method of scattered fields guessed as to their structure and then fixed by boundary conditions. Its analytic themes, moreover, are far, far more elegant.

Synthesis of Dolph-Chebyshev Like Patterns from Non-Uniform, Non-Linear and Randomized Arrays

A pattern-synthesis approach previously described by the author is used here to develop Dolph-Chebyshev-like patterns for some unconventional array geometries. The approach is briefly summarized and then demonstrated for various non-uniformly spaced arrays and nonlinear geometries. Geometries discussed include a V-shaped array, and x-aligned arrays having non-uniform element spacing as well as having elements located off the x-axis in the x-y plane. Arrays having randomly located elements are also exploted. The goal is to show that patterns having equipple sidelobes can be produced by a variety of array geometries.

Wedge Diffraction as an Instance of Radiative Shielding

The celebrated Sommerfeld wedge diffraction solution is reexamined from a null interior field perspective. Exact surface currents provided by that solution, when considered as disembodied half-plane laminae radiating into an ambient, uniform space both inside and outside the wedge proper, do succeed in reconstituting both a specular, mirror field above the exposed face, and a shielding plane-wave field of a sign opposite to that of the incoming excitation which, under superposition, creates both the classical, geometric-optics shadow, and a strictly null interior field at the dominant, plane-wave level. Both mirror and shadow radiated fields are controlled by the residue at just one simple pole encountered during a spectral radiative field assembly, fixed in place by incidence direction φ0 as measured from the exposed face. The radiated fields further provide diffractive contributions drawn from two saddle points that track observation angle φ: Even these, more or less asymptotic contributions, are found to cancel exactly within the wedge interior, while, on the outside, they recover in its every detail the canonical structure lying at the base of GTD (geometric theory of diffraction). It is earnestly hoped that this revised scattering viewpoint, while leaving intact all details of the existing solution, will impart to it a fresh, physically robust meaning. Moreover, inasmuch as this viewpoint confirms, admittedly in an extreme limit, the concept of field self-consistency (known in rather more picturesque language as Ewald-Oseen extinction), perhaps such explicit vindication may yet encourage efforts to seek exact solutions to scattering/diffraction by electromagnetically permeable (i.e., dielectric) wedges, efforts that harness integral equations with polarization/ohmic currents distributed throughout wedge volumes as sources radiating into an ambient, uniform reference medium.