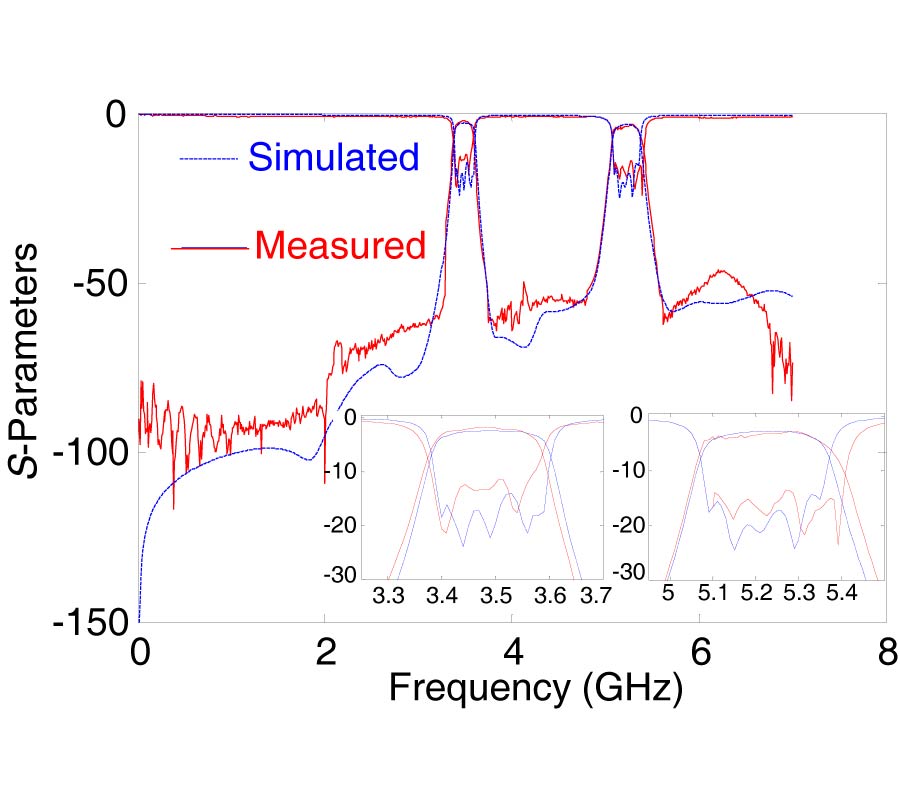 A multi-stub-loaded resonator is presented in this paper. The resonators can be conveniently applied to design high-order dual-band bandpass filters (BPFs). Base on the analysis of the resonator, the first two even-mode resonant frequencies are controlled independently by the lengths of the loaded stubs. Two high-order dual-band BPFs using the first two even-mode resonant frequencies of the multi-stub-loaded resonators are proposed. The bandwidth of each passband can be adjusted independently by the coupling strength of the adjacent resonators. This paper deals with the analysis and design of the proposed high-order dual-band BPFs as well as the experimental validations of the predicted dual-band performance. 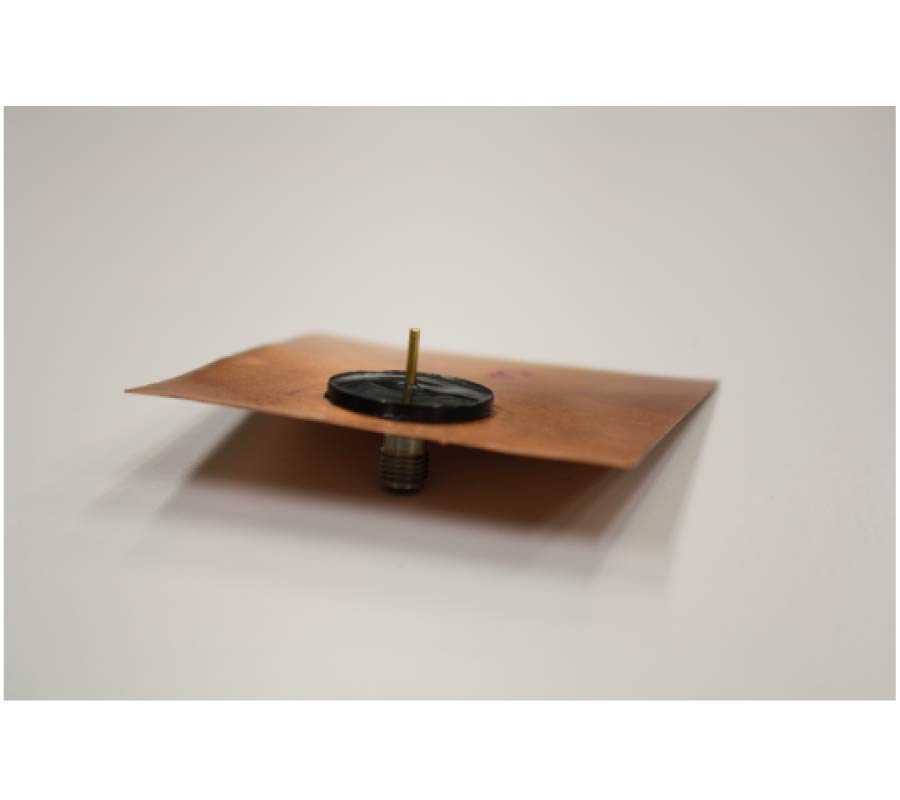 This work presents the results of numerical simulations and parametric studies of dielectric loaded wire monopole antenna, of which the main advantage is bandwidth enhancement. Introducing dielectric loading makes it possible to tune antenna to operate over a frequency range not covered with unloaded antenna, while maintaining an omnidirectional radiation pattern. The simulations are performed when loading is done with lossy as well as lossless dielectric and the results are compared. The observational frequency range is extended up to 40 GHz. In addition, the simulated results are compared with the measured S11 of four fabricated antennas loaded with lossy dielectric and a good agreement is obtained.

A novel approach for the design of image encryption system based on one stage of 3D photonic bandgap structure is proposed. Using the Finite Integration Time Domain (FITD) method, the performance of the proposed design is optimized through the utilization of the reflection properties from 3D photonic bandgap structure while maintaining constant phase encoding. To demonstrate the robustness of the suggested encryption system, root mean square error is calculated between the original and decrypted images revealing the high accuracy in retrieving the images. In addition, as the proposed system renders itself as easy to fabricate, it has an excellent potential for being very useful in both microwaves and photonics imaging system applications. 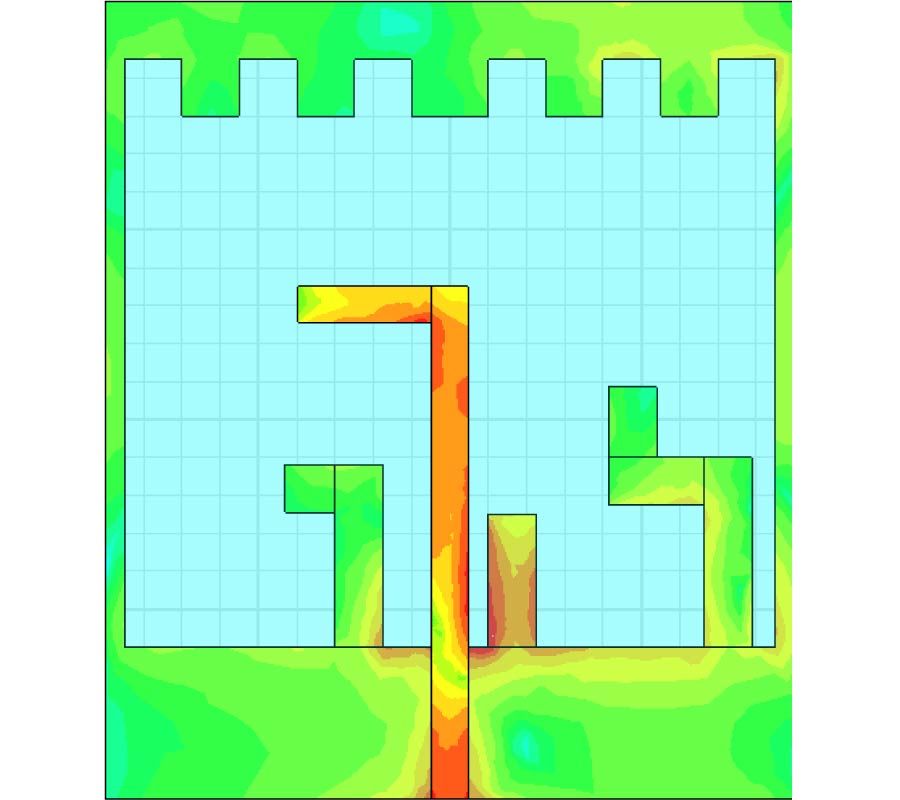 A compact quad-band rectangular wide-slot antenna is developed for GPS L1 band, 2.5/3.5/5.5 GHz WiMAX and 2.4/5.2/5.8 GHz WLAN applications. The planar antenna consists of an L-shaped microstrip feed line and three stubs extending from the wide-slot on the ground plane. The performance of the antenna is enhanced by etching meander line on the top of the wide-slot. The proposed antenna has a size of 36*42*1 mm3 which is more compact than the previously reported antennas for the same application. The antenna has been simulated, fabricated and measured successfully. The measured results show that the antenna has the impedance bandwidths of 160 MHz (1.54-1.7 GHz), 380 MHz (2.38-2.76 GHz), 570 MHz (3.2-3.77 GHz) and 1130 MHz (5.12-6.25 GHz) for S11 ≤ -10 dB. In addition, good radiation characteristics and stable antenna gains over the operating bands are obtained. 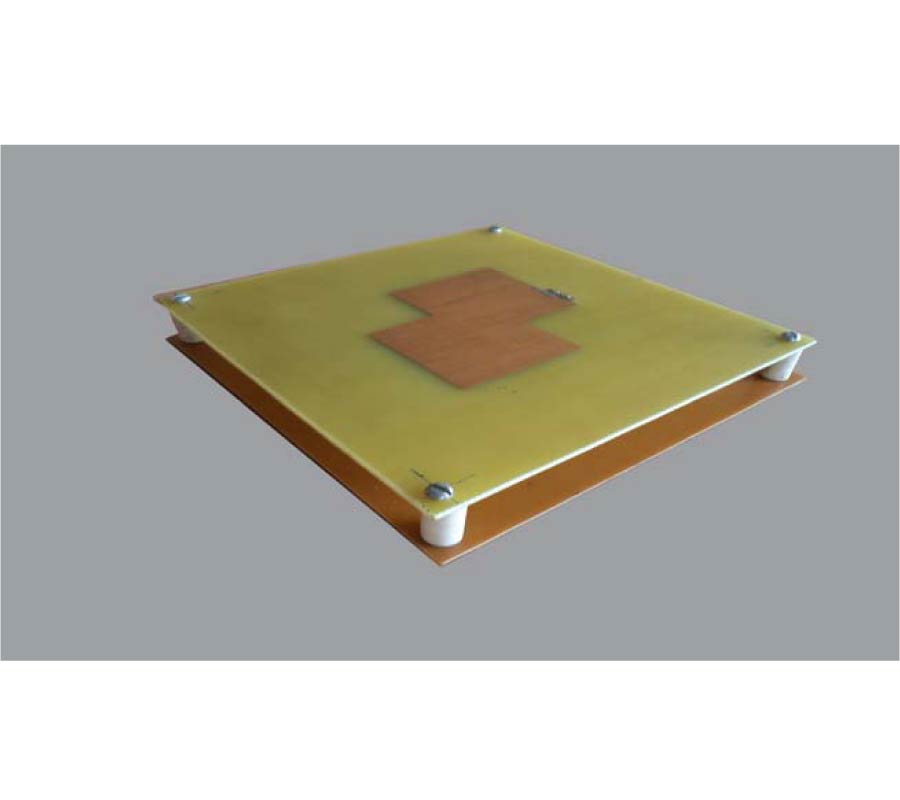 Wideband Circularly polarized antenna receive much attention in the wireless communication applications such as Global positioning system (GPS) and Personal communication system (PCS). In this paper, a microstrip square patch, truncated in opposite corners, suspended above the ground plane is proposed. The geometry incorporates the capacitive feed strip which is fed by a coaxial probe. The proposed structure is designed, simulated and fabricated to cover the entire frequency of GPS, i.e., L1 (1.575 GHz), L2 (1.227 GHz), and L5 (1.176 GHz), covering from (1.15 GHz-1.6 GHz). The parameters such as return loss, VSWR, impedance, radiation efficiency axial ratio and radiation pattern are used for analyzing the performance of the antenna. Both simulated and experimental results are presented and they exhibit broadband characteristics, covering the desired frequency bands. 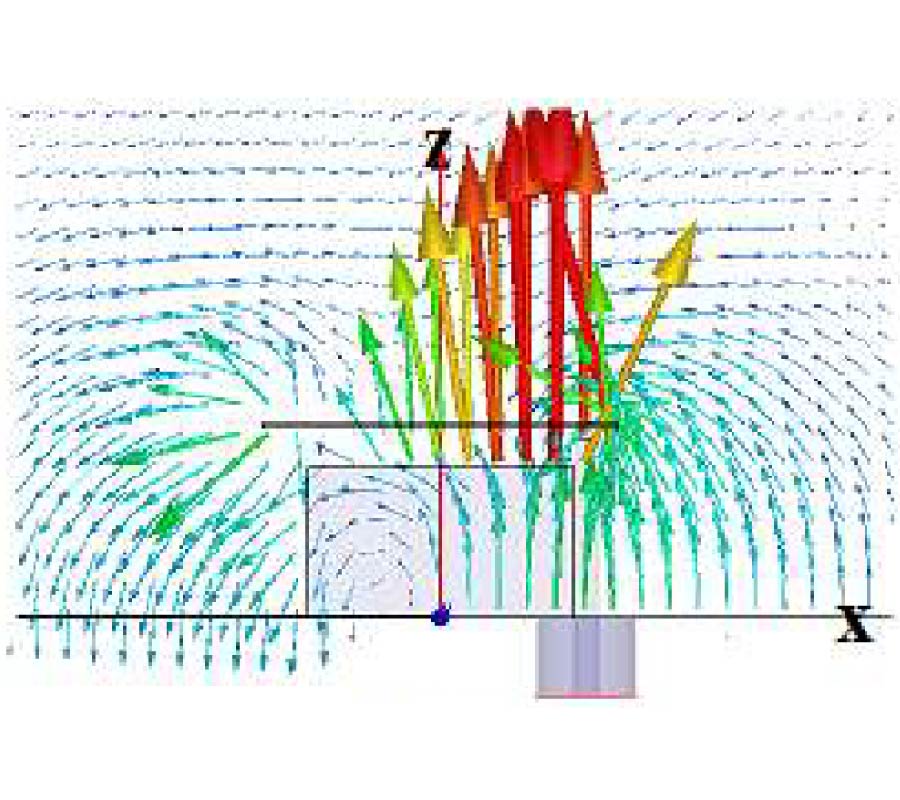 A dielectric resonator loaded patch antenna excited by a coaxial cable is proposed in this paper. The results from measurement show a wide impedance bandwidth of 57.1% from 3.75 GHz to 6.75 GHz and a peak gain of 11.5 dB at the center of frequency band with an average gain improvement of 3 dB over the frequency band in comparison with the common dielectric resonator antennas. These results are in good agreement with those obtained by the computer simulations. A simple study of the antenna shows that the aperture size increase is the cause of gain enhancement. A theoretical model based on the simulated gain results of reference antenna and its equivalent aperture is presented for the proposed antenna structure with good agreement with simulation and measurement results. The advantages of the proposed antenna are high gain with broad bandwidth, and low fabrication cost in comparison to other types of high gain DRAs having narrow bandwidths and complex structures. 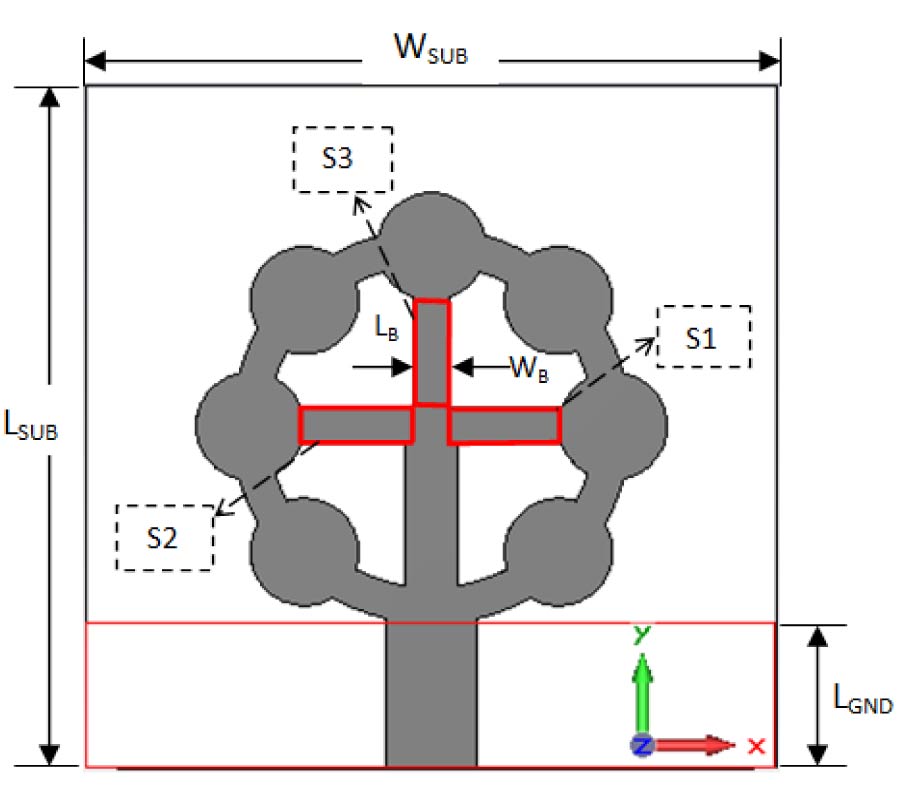 A novel compact tree-design antenna (NCTA) with the ability of reconfigurable ultra-wideband (UWB) of 3.1 GHz to 10.6GHz to five multi-narrowband applications is proposed. This antenna has a novel radiating element design that consists of seven small circles (7-filter) surrounding a central circle. Moreover, the NCTA incorporates the 7-filter that functioned as filter into the antenna design. The compact 38mm x 38mm antenna integrates three PIN diode switches, which are connected to a single National Instrument Data Acquisition (NI-DAQ) Board. The DAQ itself is controlled (ON/OFF state) by a virtual instrument known as "Lab VIEW Interface Software". The activation of specific PIN diode switches in the configuration that is controlled by the DAQ then, in turn, determines the frequency agility. The presented antenna is capable of performing up to five multi-bands. The operating frequencies are as follows; band 1 (2.72-11.8 GHz), band 2 (2.4-4 GHz, 5.3-11.6 GHz), band 3 (2.7-6.5 GHz, 7.1-11.6 GHz), band 4 (2.7-4.4 GHz, 5.2-6.5 GHz, 7.1-11.7 GHz) and band 5 (2.6-3.5 GHz, 4.8-7.0 GHz, 7.4 GHz-11.5 GHz). Furthermore, the antenna has a gain of up to 6dBi, which is considered better than that of conventional antenna. The proposed antenna produces a proficient divisive radiation pattern at 4 and 6 GHz. The experimental results exhibit the success of the antenna performance. It is competent as future candidate for cognitive radio and military applications.

A wide slot antenna fed by a microstrip line ended with a hexagonal tuning stub and its variation with dual band-notched function for ultrawideband operations are presented. The fundamental configuration is a rectangular slot on a printed circuit board with a low relative dielectric constant of 2.65. Three tuning stubs are employed at the edges of the slot to ensure the impedance matching. This original antenna achieves an operation bandwidth from 3.1 to 11.5 GHz with a stable gain performance and a very compact size of 22 mm×22 mm×0.5 mm. By etching a C-shaped slit and a Hilbert fractal curve slit on the original antenna without retuning, band-notched characteristics in the 3.40-3.69 GHz WiMAX band and the 5.15-5.825 GHz WLAN band can be realized, respectively. A rectangular patch is added to eliminate the spurious notched band around 10.5 GHz.

This paper presents a one decade low-cost forward network analyzer based on a modified six-port technique. An instrumentation integrating the hardware and software resources offering advantages such as robustness and compactness is developed. The microwave part of the system is fabricated in planar technology. Associated to this system, a one-step calibration procedure is implemented on an 8-bits microcontroller. The performance, in term of measurement accuracy, is evaluated by comparing the results obtained from the system proposed to those given by a conventional network analyzer in the frequency band 1-10 GHz. 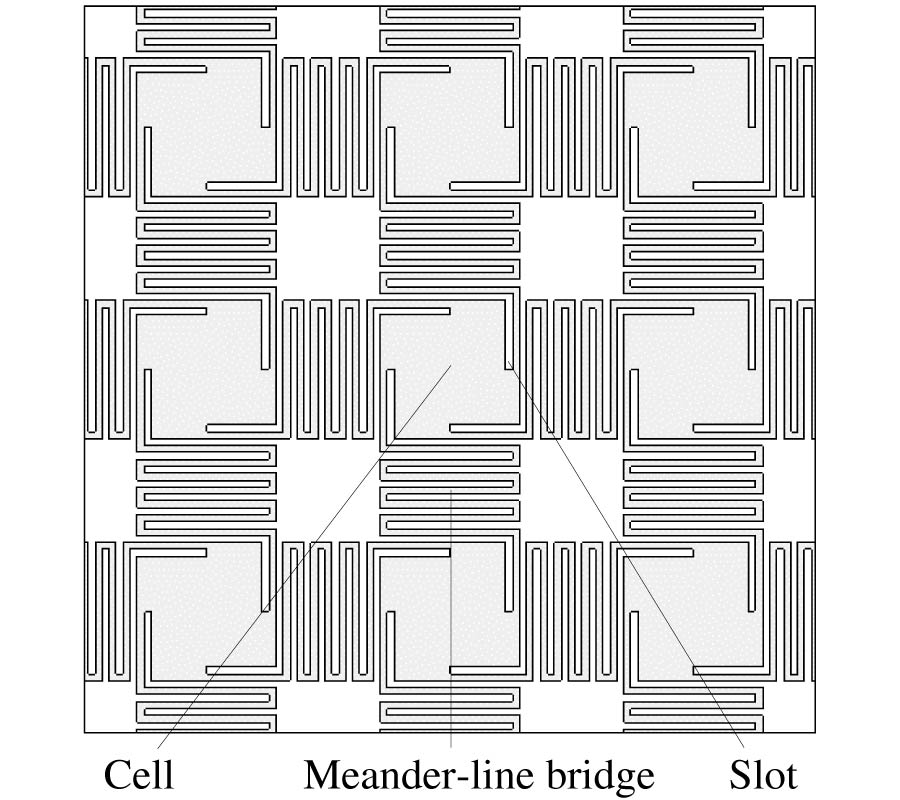 An electromagnetic bandgap (EBG) structure is proposed to suppress the simultaneous switching noise (SSN) from 0.45 GHz to 5.3 GHz with an averaged suppression level of −66.4 dB. The design is based on the inductance enhancement by using meander lines to bridge slotted metal patches embedded into the power plane. Numerical simulation and experimental measurement are both used in the study for mutual verification. Compared to the conventional L-bridged EBG structure, the novel design increases the bandwidth by 15% and reduces the lower frequency by 150 MHz. A better omnidirectional SSN suppression is also achieved. For high-speed digital applications, the signal integrity is analyzed and improved. 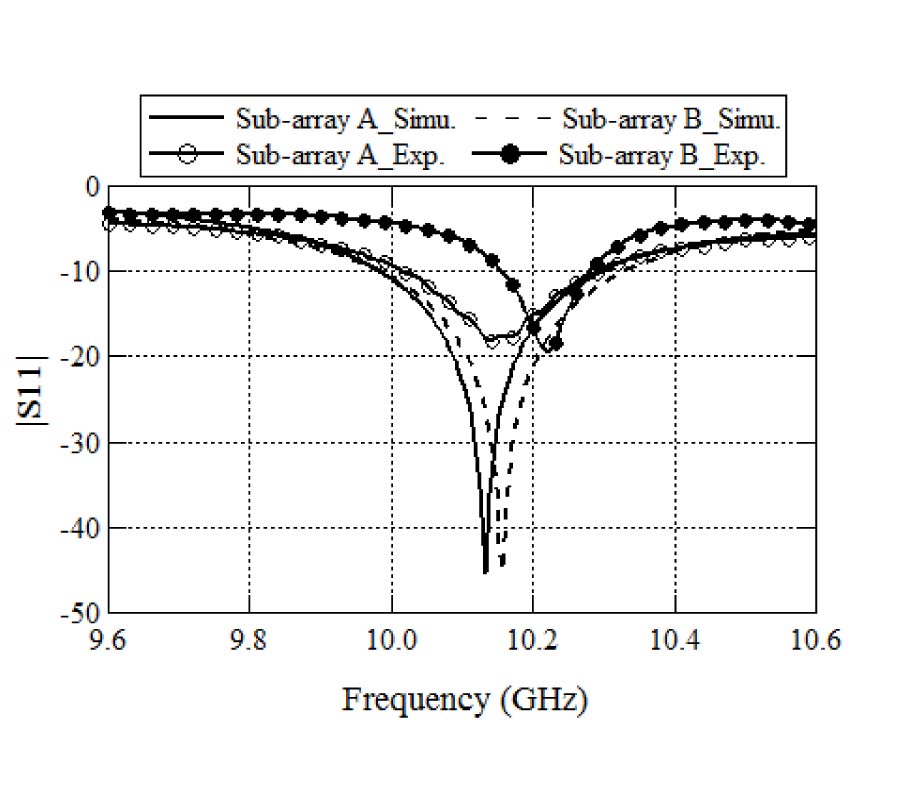 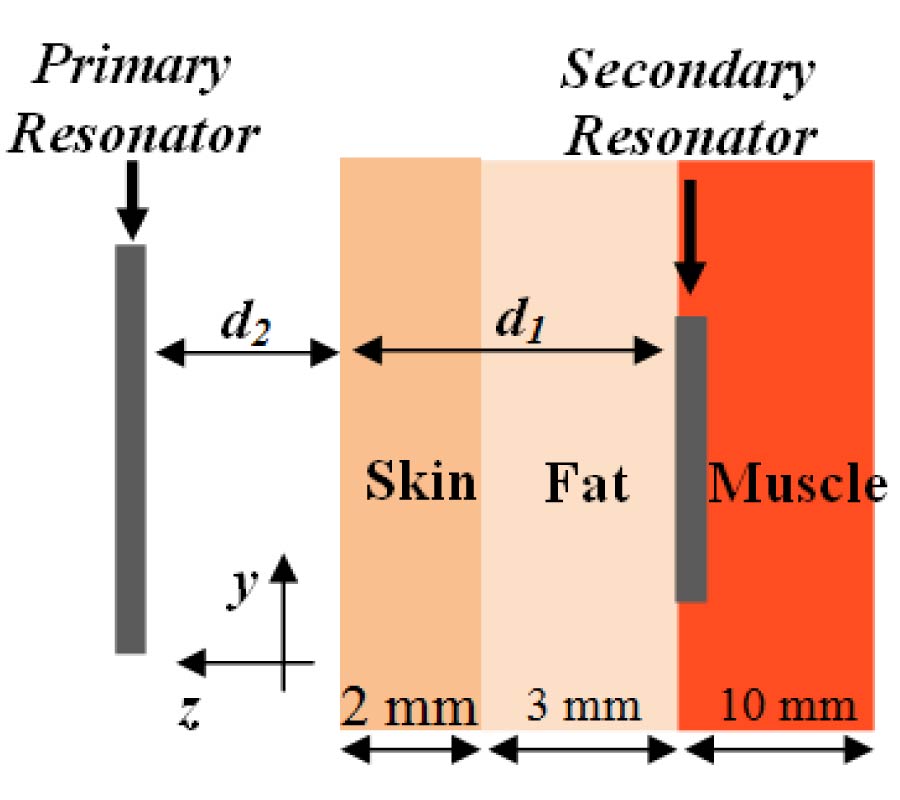 This paper presents an experimental study of the performance of a wireless resonant energy link for implantable biomedical devices. More specifically, the proposed system consists of two planar resonators: a primary resonator that is connected to a power source and operates outside the body, and a secondary resonator that is connected to the implanted device and operates inside the body. Each resonator is a planar spiral resonator; the wireless power transmission is obtained by exploiting the magnetic coupling between the two resonators when they are operating at small distances. A prototype working in the ISM band centered at 434 MHz has been developed and analyzed. Reported results confirm that the proposed system is a viable solution for wirelessly providing implantable devices with the power necessary for operation.

Design of Millimeter-Wave Wideband Mixer with a Novel IF Block

In this paper, a novel suspended stripline IF block is proposed for the design of millimeter-wave finline balanced mixer which covers the full U-band. In high IF frequency applications, IF block of a finline mixer is needed to act as open terminal for IF signal, and is required to have minimum attenuation for LO signal. For the purpose of reducing the insertion loss of the IF block in the LO path, a novel compact low loss IF block is developed for the first time. Then the IF block, two Schottky diodes, a LPF, a finline to waveguide transition and a suspended stripline to waveguide transition are integrated together to compose the mixer. The RF port matching is designed by using impedance substitution method to achieve better RF return loss. The measured results show that a conversion loss of 4.1 to 9.6 dB over a 20 GHz instantaneous IF bandwidth has been achieved when sweeping RF from 40 to 60 GHz under fixed LO condition. The P-1dB at RF port is higher than 5 dBm, and the return loss of RF port is between -18 to -4 dB.

The use of Radio Frequency IDentification (RFID) technology in a large array of contexts is a matter of fact. In many cases, such as in robotic applications, the RFID tags should satisfy specific requisites so that read range, platform robustness, radiation properties, cost, and size must be properly taken into account during the design phase. In this work, the specific requirements of tags for RFID-assisted localization and navigation of mobile robots are highlighted and discussed. On such basis, an ad-hoc platform-robust RFID tag is designed, realized and exhaustively tested through both simulations and measurements. The achieved results are impressive and demonstrate the appropriateness of the proposed tag to operate in application scenarios where performance stability is mandatory. 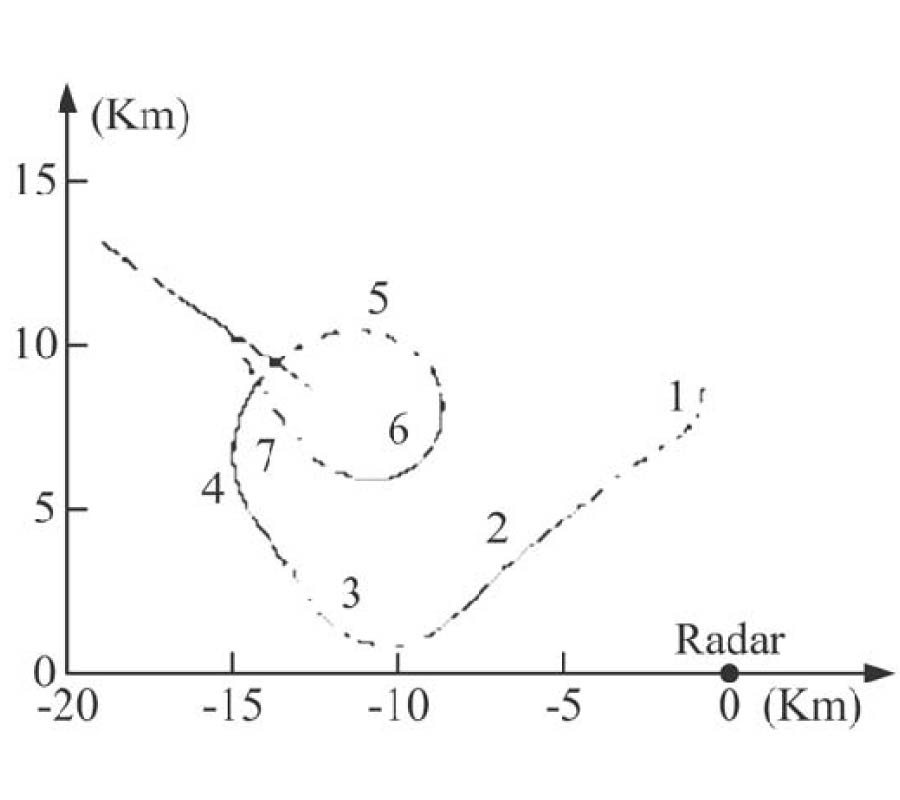 A Human Body Model Exposed to a Cluster of Waves: a Statistical Study of SAR

The impact of wireless channel modelling on exposure to electromagnetic radiation is studied. Two methods are developed in order to assess the statistical properties of whole body Specific Absorption Rate for exposure estimation in indoor environment. The body model is exposed to a bundle of waves, named cluster, following the wireless channel modelling approach. The first method is analytical and based on the Uncorrelated Scattering Assumption of the incident waves. The second method is a classical stochastic method. The point is to identify the parameters of Wireless Channel which led to significant SAR's variation.