An Effective Jammers Cancellation by Means of a Rectangular Array Antenna and a Sequential Block LMS Algorithm: Case of Mobile Sources

Adaptive array processing algorithms have received much attention in the past four decades. Modern radars have to consider various sources of noises and interferences for accurate and real time detection. In addition to interferences arising between the target and receiver, such as clutter and jammers, the use of the conventional techniques applied to the jammers cancellation in radars systems, especially when sources to cancel are moving (i.e., a dynamic environment as it is usually the case for air- and space-based radar), requires an adaptive arrays of several hundreds and/or thousands of elements. These methods are inefficient because of the large amount of data that describes the problem, which can limit considerably the achievement of the optimal performances due to the great computational complexity, costs and the very long time of both convergence and tracking. In this paper, we propose the study of a newly optimized algorithm, based on the known Least Mean Square (LMS) method due to its simplicity and effectiveness especially when work is driven toward the moving target tracking. Our proposed algorithm contains two main issues, (i) the use of partial adaptively scheme and (ii) the use of the block processing method. We present here our performances in the improvement of the signal to interference plus noise ratio (SINR) obtained due to these two aspects in cancellation of jammers and tracking. Since all the signal transformations are simple and straightforward, our new process can be significantly faster than the LMS algorithm while its effectiveness is well comparable to that when the LMS algorithm is used directly. 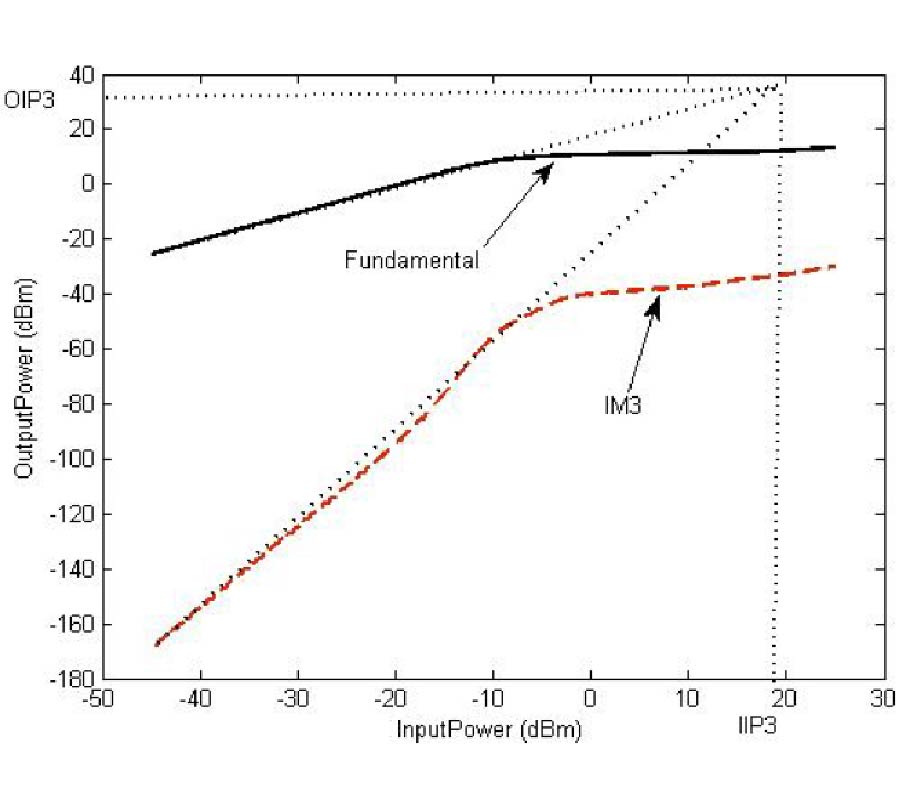 A 3-5 GHz broadband CMOS single-ended LNA with a new theoretical approach based on least-square algorithm is presented in this paper. The design consists of a wideband input impedance matching network, a cascoded amplifier with inductively-degenerated LNA, and an output impedance matching network. It is simulated in TSMC 0.18 μm standard RF CMOS process. The optimum matching network is designed to minimize the noise figure (NF) and maximize the power gain. The element values of optimum matching network have been obtained using the least-square algorithm. The proposed LNA exhibits a gain in range of 19.9-18.9 dB, over the UWB low-band (3 to 5 GHz). Moreover, the noise figure is obtained in range of 0.6-0.8 dB. Besides, the input P1-dB and IIP3 are -10.5 dBm and 18 dBm, respectively. The proposed method has minimum 4 dB power gain improvement in relative to similar works with constant noise figure. Also, the DC supply is considered to be 1.8 V.

This paper proposes a novel subspace projection algorithm for impulsive interference (IMI) suppression in echo samples received by an over-the-horizon radar (OTHR). We particularly highlight the model that the frequency spectrum of IMI component is a complex cosine signal such that IMI cosine can be filtered out by subspace projection. Compared with existing algorithms, a more simple clutter suppression algorithm is used to reject the most powerful clutter components. Furthermore, this algorithm will neither estimate nor need the exact temporal position of IMI, which avoids the impact resulted from the position estimation error. Another advantage is its little impact on true target signal and no impact on the clutter. Experimental results based on data from real high frequency surface wave (HFSW) OTHR systems are also shown to verify the proposed algorithm.

In this paper, theoretical and simulation studies on rectangular and annular dielectric resonator antenna (DRA) made of TiO2 was reported. The ceramic was fabricated by solid state reaction at 1200oC. The structural and dielectric properties were investigated by X-Ray Diffraction (XRD), Field Emission Electron Microscopy (FESEM) and network Analyzer. The XRD results showed the presence of rutile phase and the microstructure comprised of fine grain (0.2-0.5 μm) and large grain 1.0-1.5 μm. The rectangular and annular shape TiO2 DRA with high dielectric constant (ε=84) and low loss tangent (0.080) were fed with 50Ω microstrip transmission line and comparision between the various shape were investigated. The return loss, input impedance and radiation pattern TiO2 DRA was studied. Design simulation results using CST Microwave Studio 2008 also was presented. 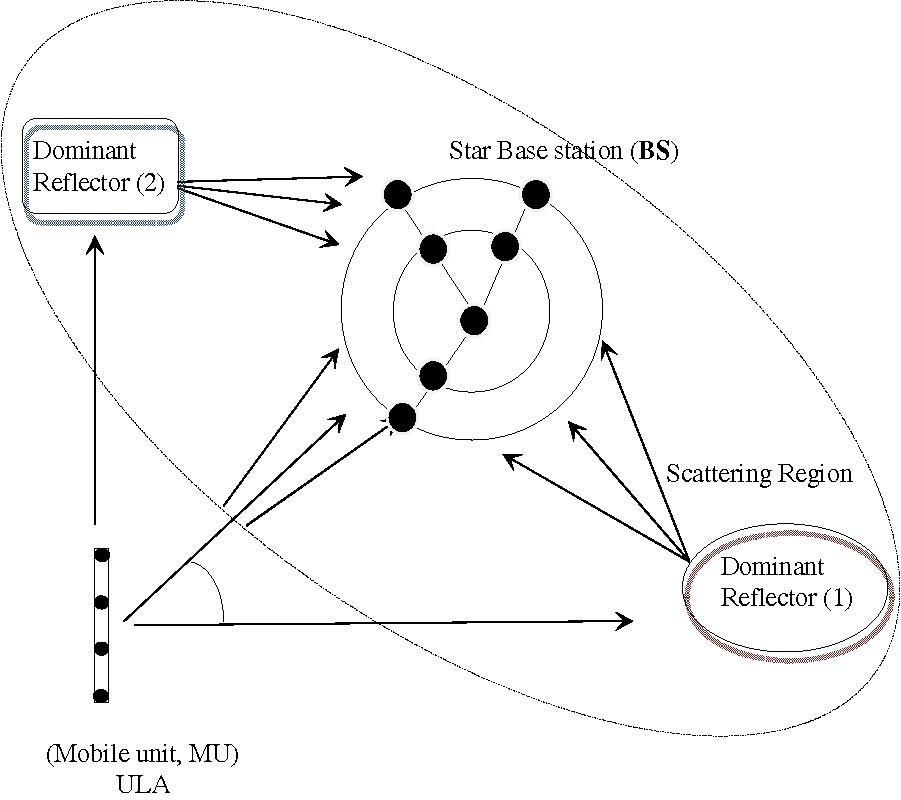 The geometrical parameters of antenna arrays in a multiple-input multiple-output (MIMO) link that will maximise the ergodic channel capacity of the system are investigated. The problem of selecting the optimum number of the elements at the base station antenna array is also included. The genetic algorithm technique is applied for the optimisation process, using the ergodic capacity as a fitness function. A discrete model based on statistical distribution of the Angle of Arrival (AoA) of the incoming rays is considered. Searching for more compactness in the antenna size and higher system capacity, different array configurations with non-uniform inter-element spacing are considered, such as linear array, circular array and multi-circular array (Star) geometries. Numerical examples that illustrate new designs of non-uniform spaced arrays are presented to show the capability of the developed procedures to optimize the capacity of indoor MIMO systems. 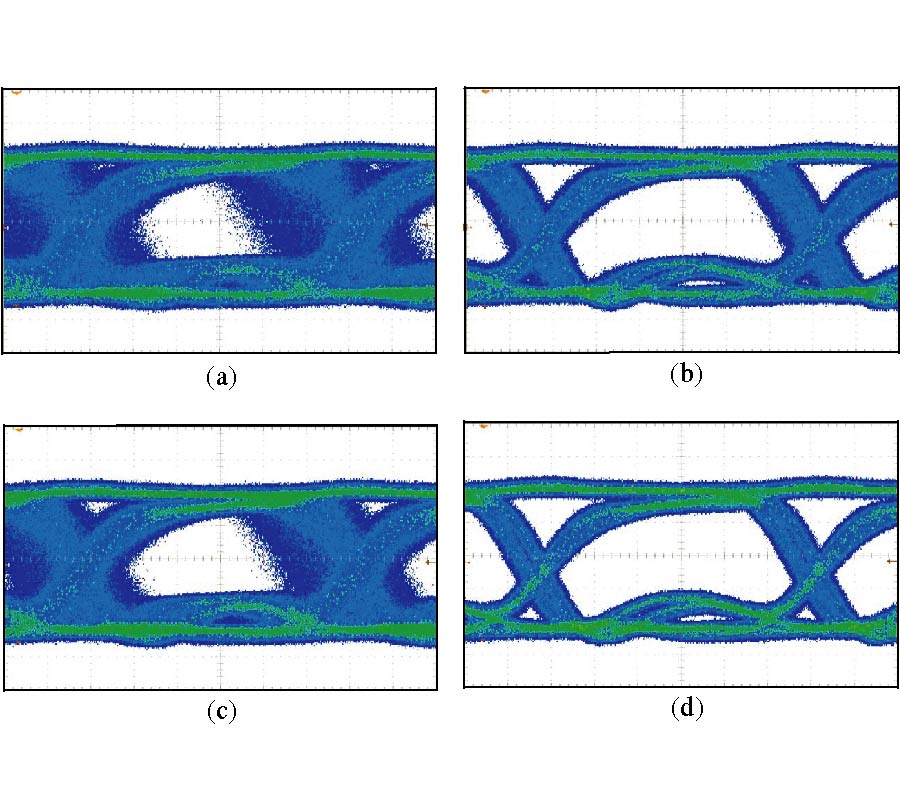 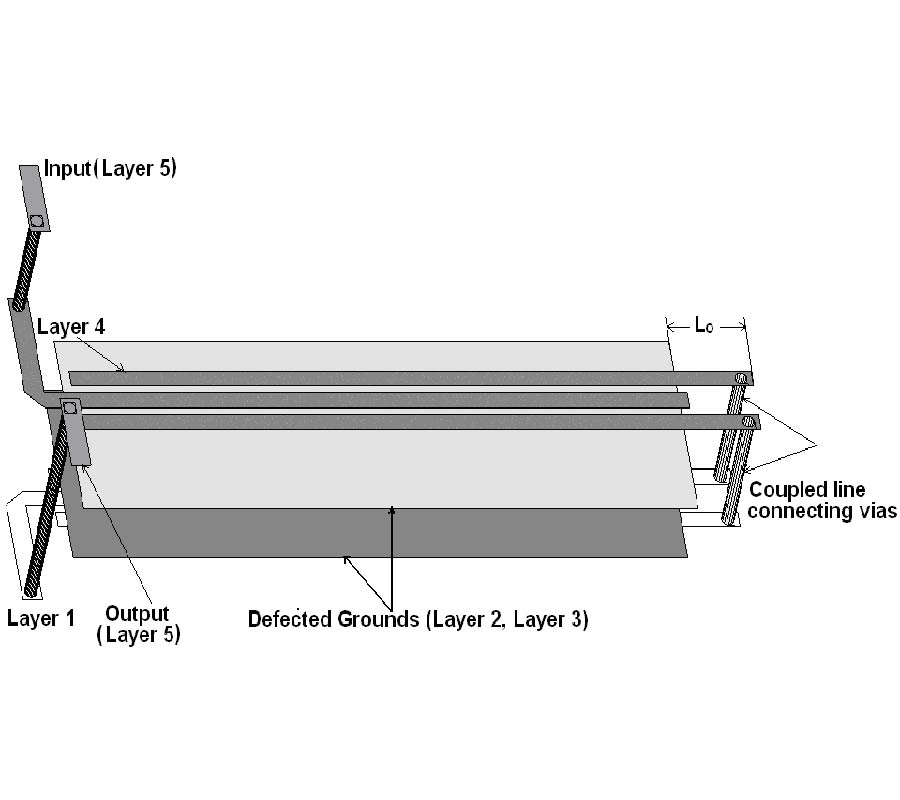 This paper presents analysis and design of a compact ultra wide band (UWB) filter using three parallel folded coupled lines in a defected ground structure in multi-layer structure. Defected ground has been incorporated under the coupled lines of the filter to improve the coupling over a wide bandwidth. The closed form expressions for even and odd mode impedances for the coupled lines with defected ground have been obtained to design a filter of desired bandwidth with the proposed structure. Based on circuit models, an UWB filter for 3.1-10.6 GHz has been analyzed and the results have been compared using full wave simulations. Analytical results are satisfactorily matching with simulations. Filter exhibits a constant group delay of ±0.08 ns in the pass band. Size of the filter is 6.2 mm×3.4 mm×2.8 mm. 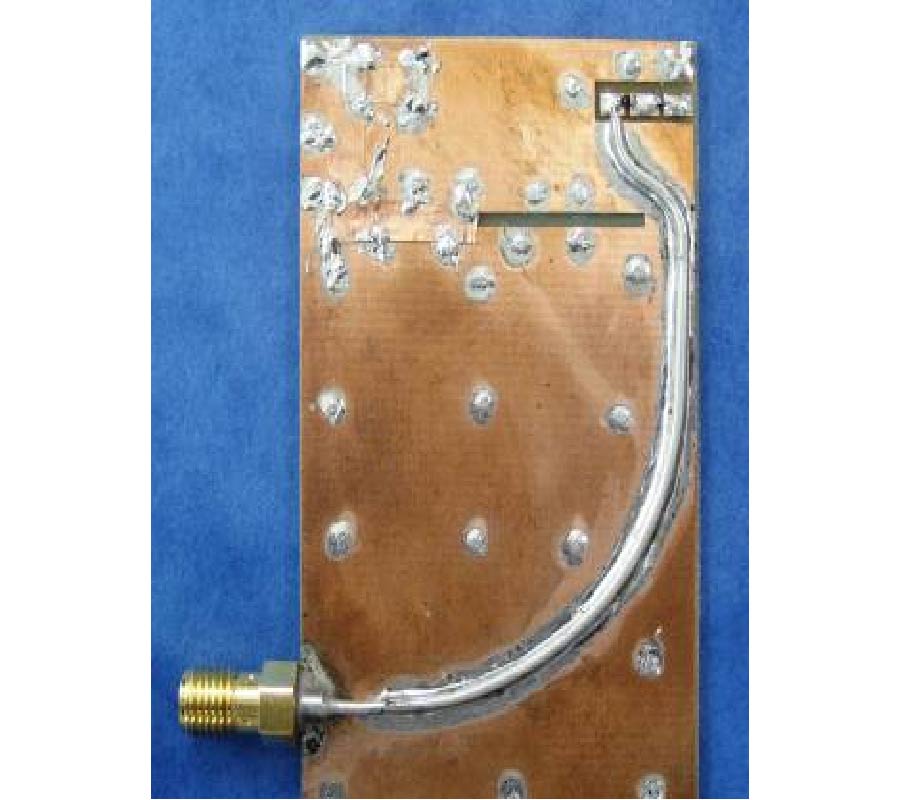 Multiband Handset Antenna Using Slots on the Ground Plane: Considerations to Facilitate the Integration of the Feeding Transmission Line

This research consists on a ground plane modification using slots of a PIFA (Planar Inverted F Antenna) handset antenna with the objective to facilitate the integration of the feeding transmission line which connects the antenna with the RF-module. Through this technique it is possible to obtain a multiband antenna while keeping the same antenna geometry, small volume and simplifying the PCB (Printed Circuit Board) design. Numerical simulation using MoM is used to understand the effect of the slots on the groundplane. Several prototypes have been built to validate the present technique. 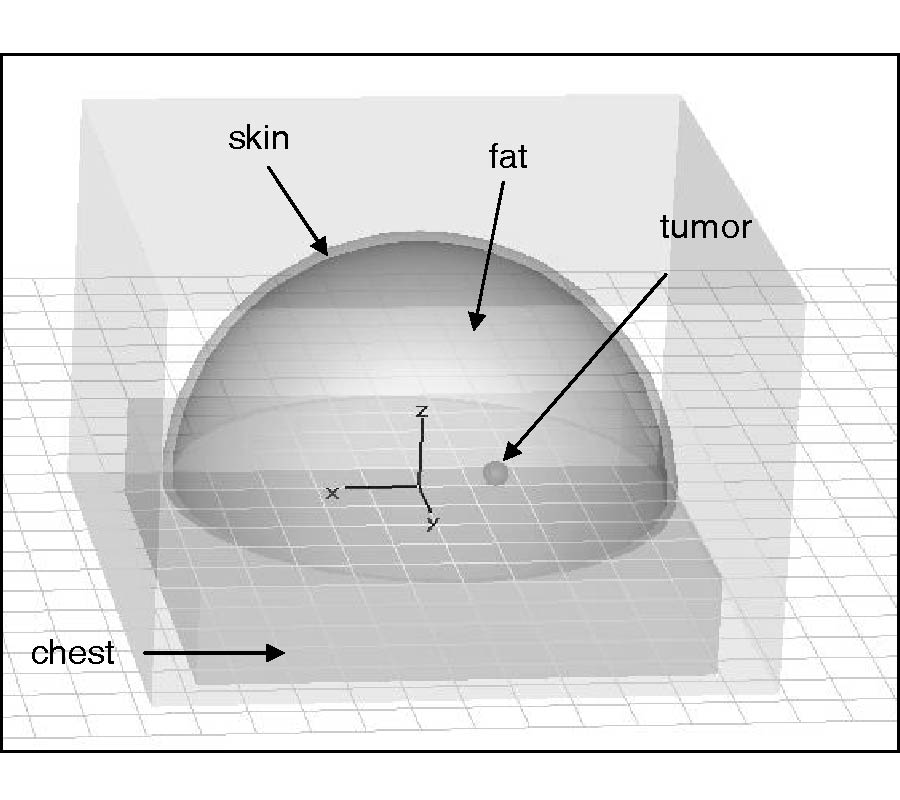 This paper presents a simple feed-forward back-propagation Neural Network (NN) model to detect and locate early breast cancer/tumor efficiently through the investigation of Electromagnetic (EM) waves. A spherical tumor of radius 0.25 cm was created and placed at arbitrary locations in a breast model using an EM simulator. Directional antennas were used to transmit and receive Ultra-Wide Band (UWB) signals in 4 to 8 GHz frequency range. Small training and validation sets were constructed to train and test the NN. The received signals were fed into the trained NN model to find the presence and location of tumor. Very optimistic results (about 100% and 94.4% presence and location detection rate of tumor respectively) have been observed for early received signal components with the NN model. Hence, the proposed model is very potential for early tumor detection to save human lives in the future.

This paper presents a new concept to implement tunable lowpass filters by employing slot resonators etched in the ground plane. The tenability is achieved with the use of switches with varactor diodes attached across the slots on the ground. The concept is demonstrated by considering 10-slots lowpass and 4-slots low pass filters. The Microstrip lines with a folded slot etched in the ground plane structure are modelled in multilayered media. To analyze this type of structure an iterative method based on the concept of waves is developed and adapted to determine features of very high frequency's electronic circuits in a planar wave guide. The analysis takes into account eventual coupling parasites. Experimental measurements are performed to validate the computation. The approach involves the mixed magnetic and electric filed equation technique and the wave concept iterative process which involves S-parameters extraction technique. In this sense, a program in FORTRAN has been elaborated to determine different parameters Sij characterizing the studied structure. 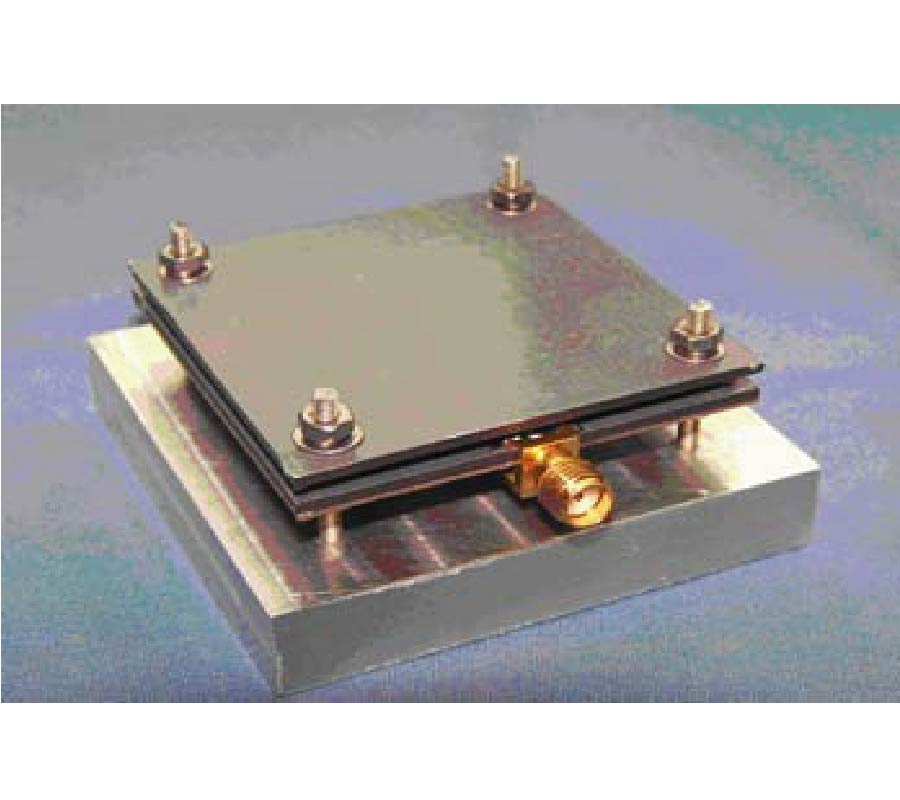 The X-band wide band aperture-coupled stacked microstrip antenna is studied and manufactured. Based on the finite-difference time-domain method, a parametric study of the input impedance of the antenna is presented, and the effects of some parameters which are not easy to control in manufacture of the antenna impedance are illustrated. The structure of screw-plane-support is used for the manufacture of this kind of antenna. And several notes for manufacture are considered based on the parameter analysis. The measured bandwidth in which VSWR≤2 is greater than 50%. The measured results are basically accordant to numerical simulated results. It testifies the capability of the model in expanding bandwidth and validity of this structure. The radiation patterns within operation bandwidth are presented and discussed.

In this paper we will explain thoroughly a 802.11a pulse-swallow integer-N frequency synthesizer. The whole circuit is designed on chip except the loop filter. The reference frequency is set to 10 MHz and a pulse-swallow counter is designed for the purpose of controlling the dual-modulus divider (÷8/9). The frequency tuning range varies from 4.98 GHz to 5.73 GHz meanwhile the output power of the voltage-controlled oscillator is -13.5 dBm, and the phase noise measured at 1MHz is -126 dBc/Hz. The settling time of the closed loop is about 20 us, the total power dissipation is 26.35 mW with 1.8 V supply voltage. The chip is fabricated under TSMC CMOS 0.18 um.

The effect of soil properties on landmines detection using Microstrip antenna with corrugated ground between the two microstrip elements as a sensor has been investigated. The effect of the electrical properties of the soil as well as the shape of the soil surface on the detection capability of the sensor is studied. The Finite-Difference Time-Domain (FDTD) has been used to simulate the sensor for landmines detection. 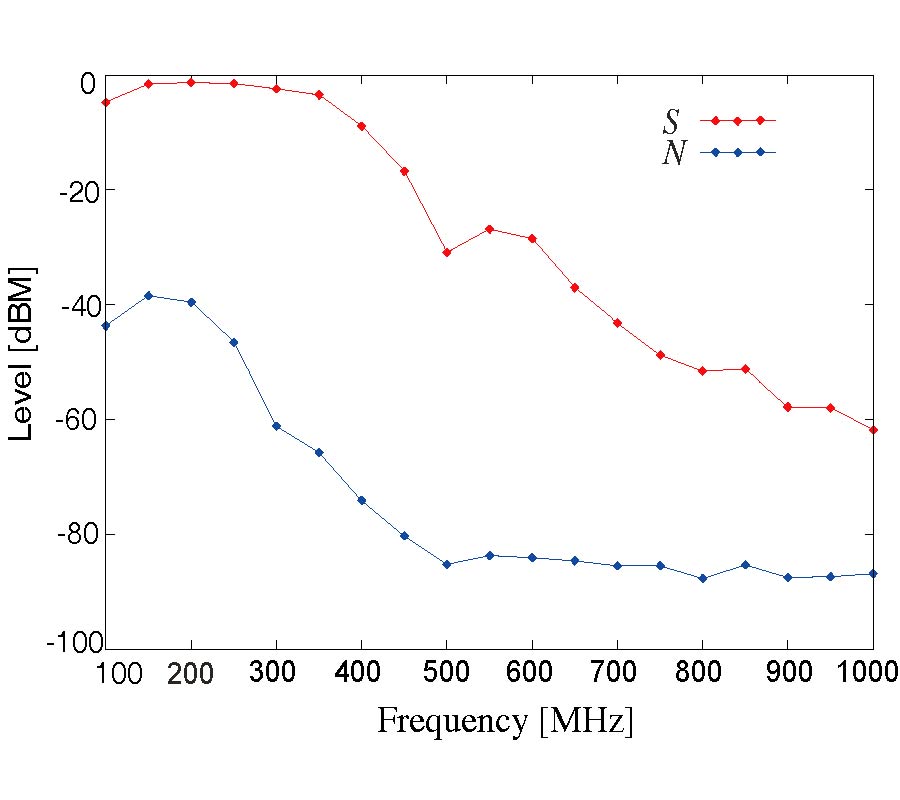