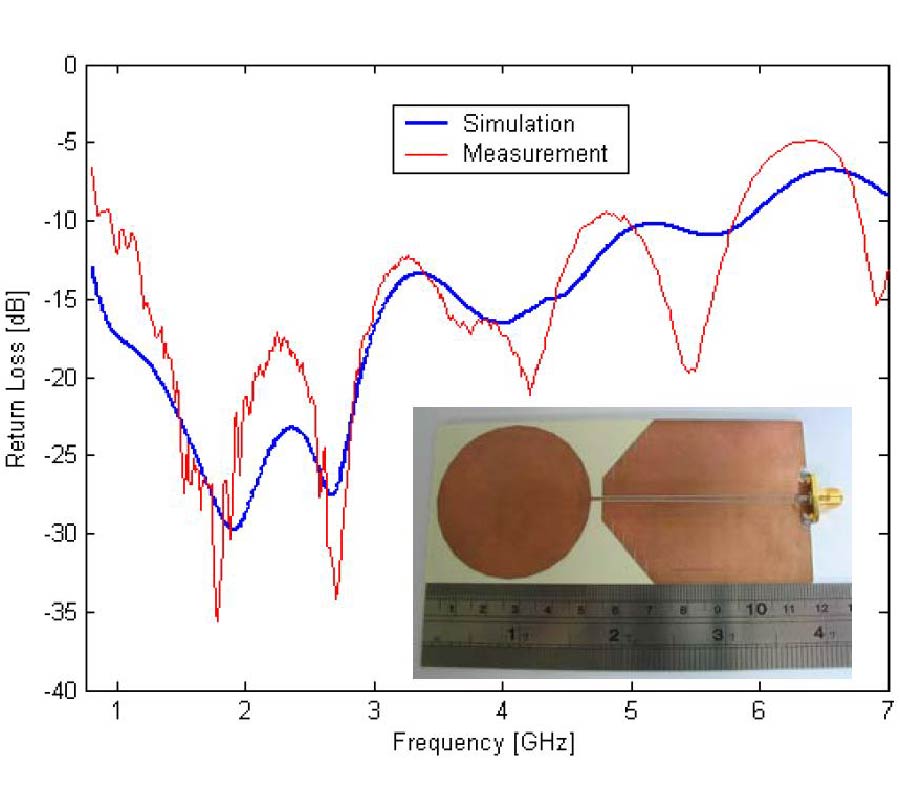 A planar, circular monopole antenna (PCMA) with satisfactory radiation characteristics over an ultra-broadband is demonstrated. Compared to the classical coplanar-waveguide (CPW) fed PCMA, the radiation characteristics of the proposed CPW-fed PCMA are significantly improved, particularly at the frequencies around the higher band edge. This improvement is achieved by exploiting a tapered and periodically corrugated edge design to the CPW ground plane. The tapered and corrugated ground-plane edge design, in essence, modifies the current distribution on the circular disc as well as along the edges of the ground plane. With this design, the cross polarization radiation is remarkably reduced, and the pattern deterioration, especially at the planes perpendicular to the plane of the antenna, is greatly alleviated. The demonstrated CPW-fed PCMA features an over 150 % VSWR=2 fractional bandwidth (0.81-5.87 GHz) and promises satisfactory radiation characteristics over the entire band. The proposed PCMA is poised for applications in wideband/ultra-wideband communication systems.

In this paper, the conformal finite-difference time-domain (CFDTD) method using PSO optimization is applied to design a compact directive balanced antipodal Vivaldi antenna for ultra-wideband (UWB) applications. This paper demonstrates miniaturized antipodal Vivaldi antenna (32 × 35 × 1.6 mm3), having low-cross polarization levels and reasonable gain from 3.1 to 10.6 GHz. The antenna peak gain is 5.25 dBi in the specified band. The simulated and experimental results of return loss, far field patterns and gain are presented. 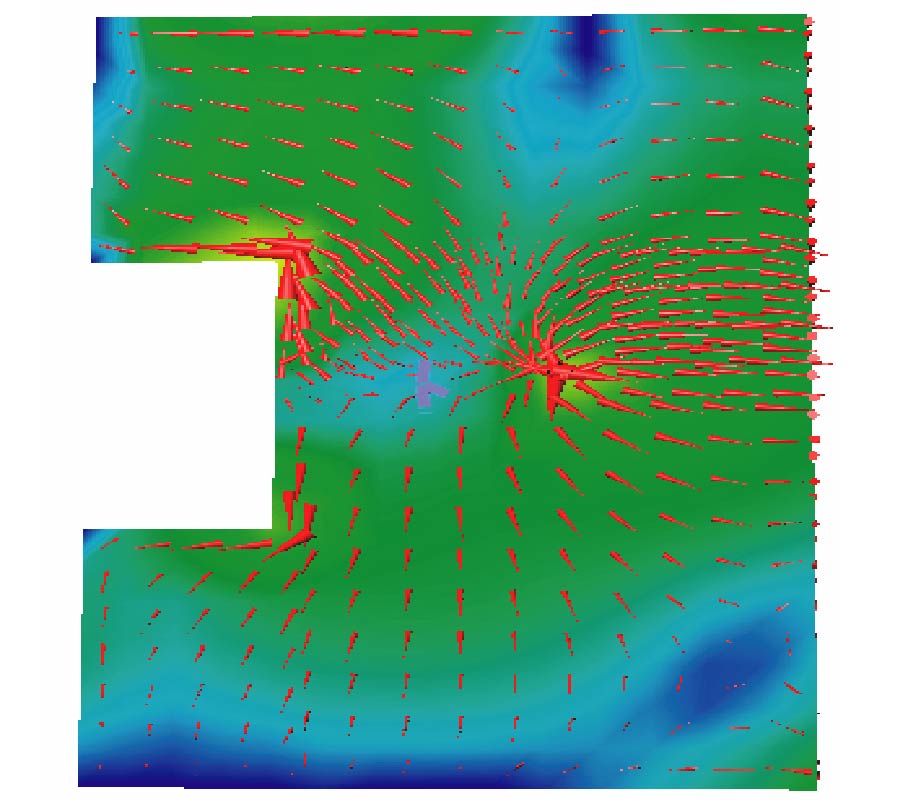 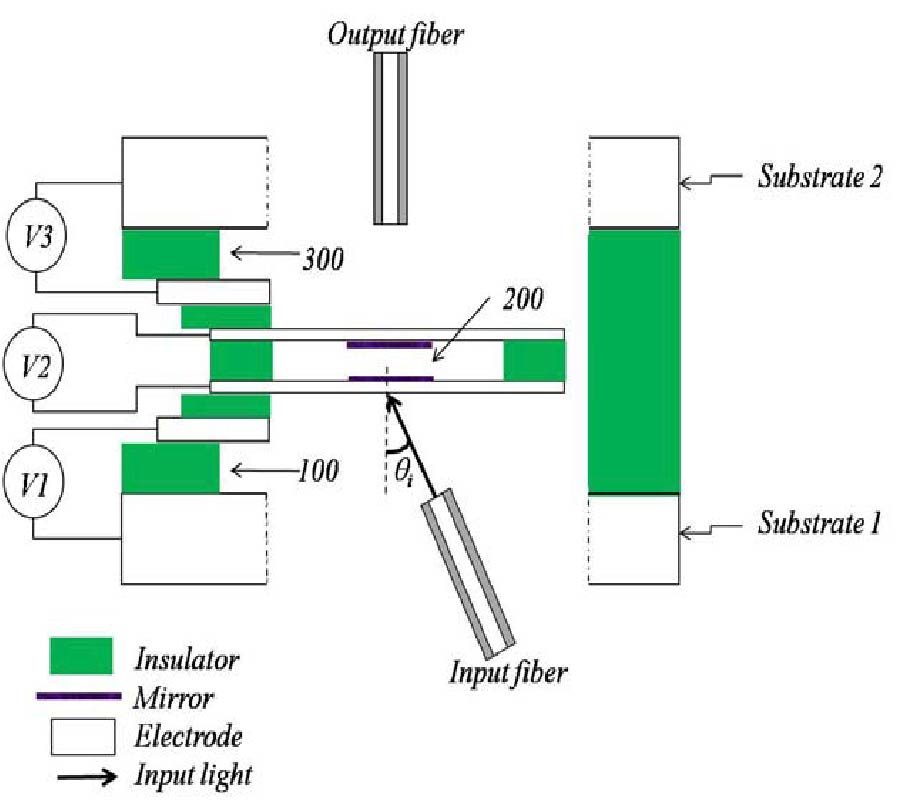 By employing Microelectromechanical system (MEMS) technology, Fabry Perot Optical Tunable Filter (FPOTF) with hybrid tuning mechanism, varying d and altering incident angle is presented. The proposed structure consists of a floating dual membrane FPOTF with capability to be tuned at different light incident angles. Three electrostatic cavities have been designed to perform this task independently. This technique is capable to increase the tuning range up to 2/3 of capacitance gap with additional doubly range of incident angle. Optic, mechanic and electrostatic analysis of the proposed structure has been validated by simulation. Analysis in optical performance shows the tuning range enhancement is about 1.92% for +/-2o mirror tilting at 6o initial angle compared to conventional dual beam MEMS FPOTF. This analysis validates the principle of hybrid tuning method.

In this paper, a triple-band printed dipole tag antenna is proposed for Radio Frequency Identification (RFID). The triple-band printed dipole antenna is designed to operate at 0.92 GHz, 2.45 GHz and 5.8 GHz using Computer Simulation Technology (CST) software. In order to achieve triple-band operation, the proposed antenna contains two branch elements, which act as an additional resonator. The designed antenna is fabricated using Taconic RF-35 substrate with a dielectric constant (εr) of 3.5 and thickness (d) of 0.508 mm. The antenna's parameters for triple-band operation are investigated and discussed. Then, this fabricated antenna is integrated with a UHF microchip to become a passive UHF tag. This tag is tested by measuring the reading distance and it is found that the proposed tag can be used for RFID application.

The characteristics of an ultra-wideband (UWB) planar monopole antenna with multiple simple slots is presented. By placing a pair of symmetrical horizontal slots on the sides of the monopole antenna a tune-able notch characteristic can be obtained. The length, width and height of the slot can be used to tune the centre frequency, bandwidth and reflection coefficient of the notch. Placing two pairs of horizontal slots on the sides of the monopole antenna two tune-able notched characteristics can be obtained. Based on slot length and slot position an approximate formula for the notch centre frequency is given. The results of simulation and measurement are presented and discussed.

In this paper, a simple and effective method for Through-The-Wall (TTW) life signs detection is introduced and discussed. To this aim, a Continuous Wave (CW) Microwave Transceiver working in X-Band is adopted. The detection procedure is based on the evaluation of correlation function in frequency domain between the measured and model signals. In order to ensure the reliability, proper background removal strategies are introduced. The effectiveness of the proposed approach is shown by processing experimental data collected in a realistic TTW scenario.

A novel printed top-loaded monopole antenna with a pair of sleeves on the ground plane for multiband wireless local area network (WLAN) applications is presented. This antenna is composed of a top-loaded monopole and two sleeves on a ground plane. Both the antenna and the ground plane are printed on the same side of an inexpensive FR4 substrate. This antenna has light weight and compact size of only 29×45×0.5 mm3. The operation bandwidth of this proposed antenna covers 2.4 GHz/5.2 GHz/5.8 GHz WLAN bands and 7.4 GHz~8.8 GHz for UWB application, which perfectly meet the requirement of multiband working. The measured and simulated results agree well with each other. 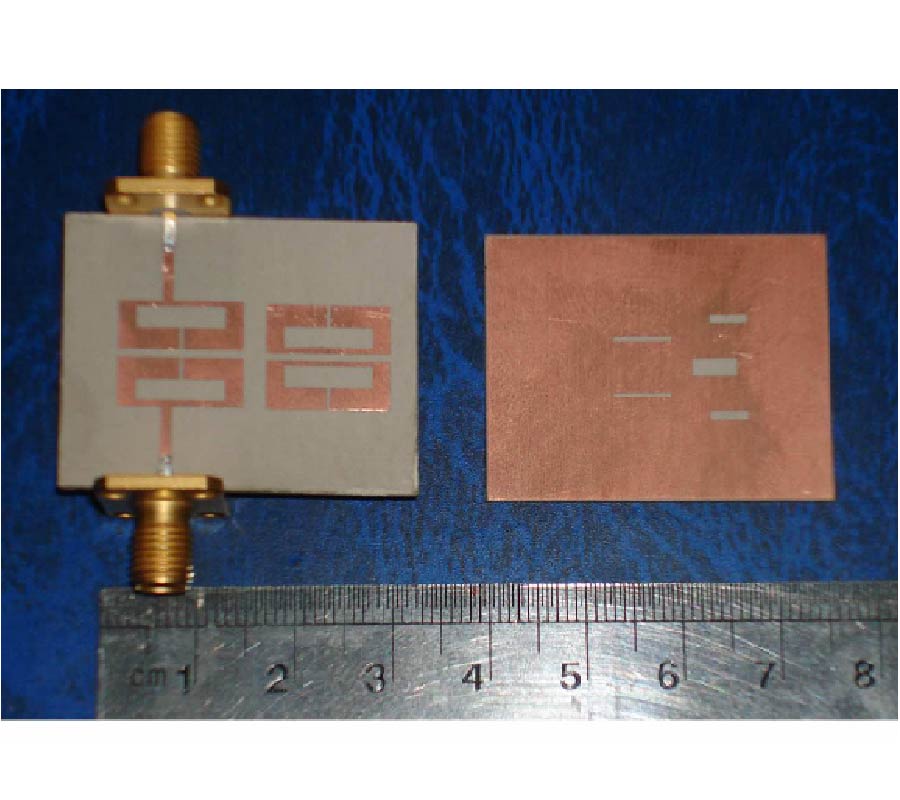 In this paper, a quasi-elliptic bandpass filter was designed, simulated, and fabricated using four-pole cross-coupled stepped impedance resonators (SIR). Using a special type of stepped impedance resonators, a great increase in rejection band width of the filter was obtained. In order to perform the mentioned design practically, we utilized a compound sandwich model of two substrates (in strip line form). Furthermore, we used Defected Ground Structure (DGS) in order to omit the first spurious resonant frequency and increase bandwidth of the filter. The fabricated sample was measured, and the results showed a good agreement with simulated results.

In this paper, we present a low cost RF oscillator design incorporating a folded parallel coupled resonator. The oscillator is designed on FR4 substrate to achieve low cost. FR4 is a low cost substrate but has a poorly controlled dielectric constant and high loss tangent thereby challenging the design of higher performance circuits. This oscillator operates in 900 MHz band, delivers an output of -3.13 dBm and has phase noise 101.8 dBc/Hz at 10 kHz offset. The size of the folded parallel coupled resonator is 16% smaller than the conventional parallel coupled resonator, thereby making the overall circuit more compact. The power output and phase noise results are better than the oscillator designed with conventional resonator. Open loop analysis method has been adopted for the oscillator design and analysis. The measured data shows good agreement with the simulated results. The performance parameters of this oscillator make it suitable for use in low cost wireless communication solutions in 900 MHz band.

The response of a two-layer structure of orthogonal coupled microstrip transmission lines illuminated by an external electromagnetic field has been studied. A simple model for the crosstalk region using lumped capacitance and inductance elements is used. The effect of the external EM field on the microstrip lines field in order to reach transmission line equations along the lines. The model is finally validated using the full wave analysis simulator, HFSS. Voltage and current along the lines obtained by the present method are in good agreement with the results of the full wave analysis (HFSS). The proposed model has been used for voltage and current in terminal ports up to 10 GHz. This method can be developed simply for multilayer structures.

This work focuses on microstrip patch antennas for the 77 GHz millimeter band. For some combinations of the parameters microstrip width, free wavelength and substrate permittivity, impedance matching via inset fed is found to be non applicable. The current distribution of the desired TM10 mode is partially disturbed. Gap coupled parasitic microstrips are analyzed in order to match the feeding impedance to the feeding microstrip while improving the bandwidth in these particular cases. 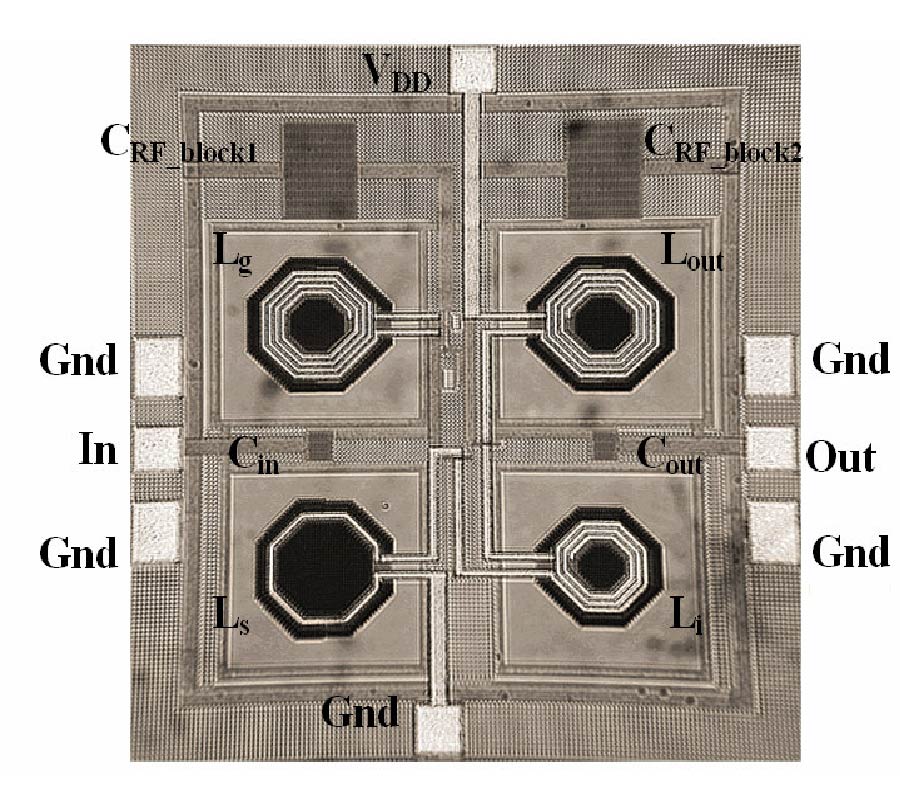 A single-stage ultra-wideband (UWB) CMOS low noise amplifier (LNA) employing interstage matching inductor on conventional cascode inductive source degeneration structure is presented in this paper. The proposed LNA is implemented in 0.18 μm CMOS technology for a 3 to 5 GHz ultra-wideband system. By careful optimization, an interstage inductor can increase the overall broadband gain while maintaining a low level of noise figure of an amplifier. The fabricated prototype has a measured power gain of +12.7 dB, input return loss of 18 dB, output return loss of 3 dB, reverse isolation of 35 dB, noise figure of 4.5 dB and input IP3 of -1 dBm at 4 GHz, while consuming 17 mW of DC dissipation at a 1.8 V supply voltage. 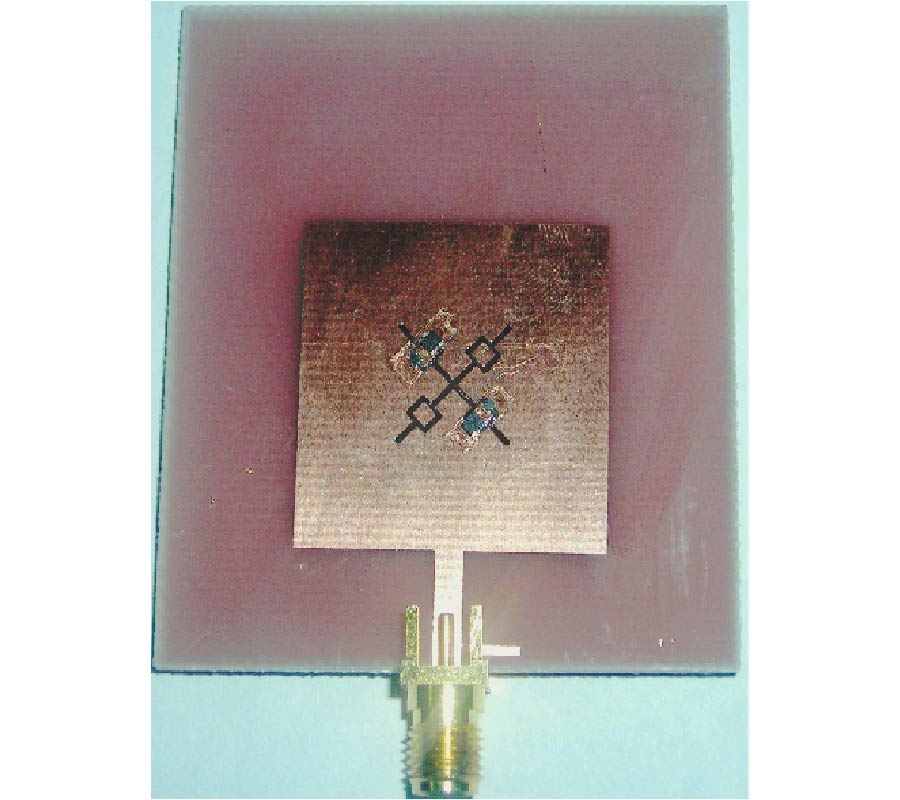 A reconfigurable patch antenna consisting of a square patch with two cross-shaped diagonal slots is presented. The proposed design approach is based on the use of two pairs of switches in order to obtain both frequency and polarization reconfigurability. Specifically, three different polarization states have been obtained: A Right-Hand Circular Polarization, a Left-Hand Circular Polarization and a Linear Polarization. Experimental results, referred to a realization on a FR4 substrate of the layouts corresponding to the useful switch configurations, are reported.

A compact dual-band high-impedance-surface EBG structure is employed as a reflector for a dual-band annular-slot antenna. The reflector comprises an array of miniaturized EBG cells which utilizes square patches augmented by four S-shaped corrugated arms to reduce the resonant frequency of the proposed EBG structure. In order to broaden the bandwidth and adjust the frequency ratio for the dualband EBG structure, a log-periodic spacing between the S-shaped strips is introduced. The combination of microstrip-fed annular slot and EBG reflector provides directional properties for both frequency bands with reduced size and low-profile.