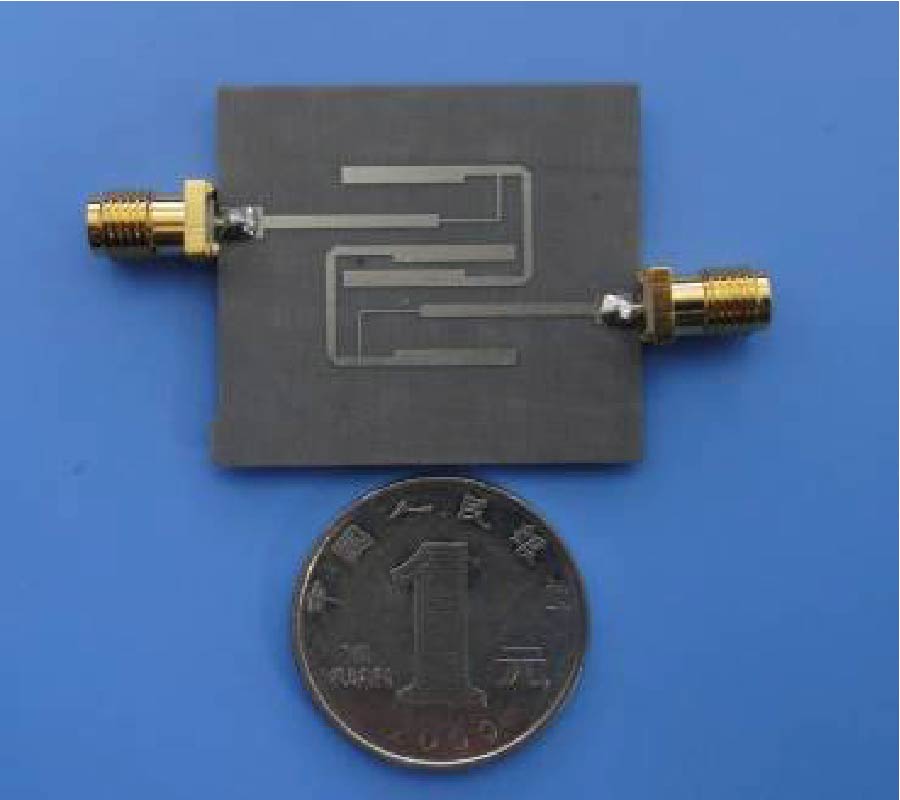 A compact cross-coupled dual-band bandpass filter based on folded Stepped Impedance Resonators (SIRs) with four controllable transmission zeros is proposed in this paper. A pair of stepped impedance tapped lines is utilized to improve the dual band impedance matching, which reduces the insertion loss of the filter; meanwhile the tapped lines are also coupled with non-adjacent resonators to produce transmission zeros to improve skirt characteristics. At the end of this paper, the simulated and measured results are compared with each other, and good agreement is achieved.

To extract the immunity model in an easy way and to complete the immunity simulation in a short time, it is preferred to consider only the disturbance propagation network in an integrated circuit system. However, through theoretical analyses, simulations and measurements, this paper shows that the on-chip transistor circuit has a nonuniform frequency response on its immunity against arrival disturbances. Including the nonuniform frequency response qualitatively improves the match between the simulation and measurement results. The conclusion is that both the disturbance propagation network and on-chip transistor circuit should be considered in the immunity simulation. 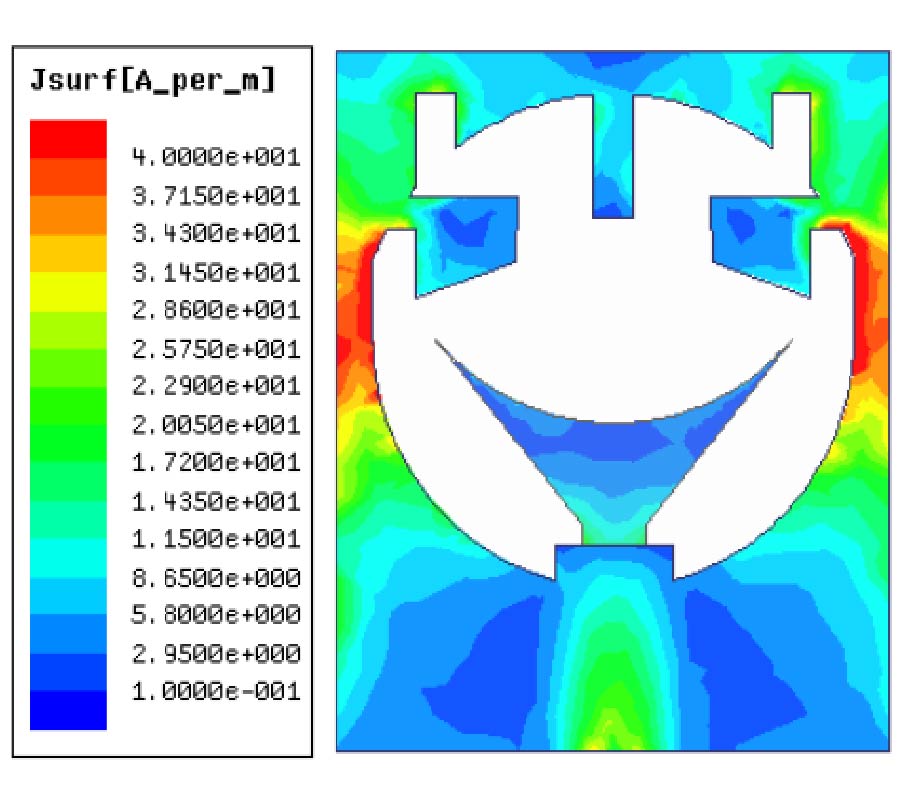 A novel microstrip antenna for triple-band WLAN/WiMAX applications is presented. Based on a face-shaped slot, the antenna consists of a pair of symmetrical eye-like patches, a smiling-mouth-shaped feeding line and a rectangular stub that looks like the fringe. The resonant mode at 3.5 GHz is excited by the basic radiation patch with the face-shaped slot. By adding a rectangular fringe-shaped stub on the top of the radiation patch and a pair of symmetrical eye-like patches without increasing the size of the antenna, the antenna can effectively generate three different resonances to cover the WLAN/WiMAX bands. The measured results show that the antenna has three separated impedance bandwidths for S11<-10 dB of 550 MHz (2.36 GHz-2.91 GHz), 790 MHz (3.27 GHz-4.06 GHz) and 810 MHz (5.07 GHz-5.88 GHz), and the measured gain is above 2.8 dB over the operating band, which can be well applied for both 2.4/5.2/5.8 GHz WLAN bands and 2.5/3.5/5.5 GHz WiMAX bands.

A novel design of fractal dipole antenna has been presented for RFID (Radio Frequency Identification) tag applications, which is based on the fractal theory. The antenna consists of two third iteration triangle fractal arms, and has been designed to work at 900 MHz (GSM) and 2.4 GHz (ISM), and its size is 89 mm×29 mm×1.6 mm. The simulated results for various characteristics of the antenna have been shown using finite element technique based commercial software ANSOFT HFSS. The simulated and measured impedance results are in good agreement. 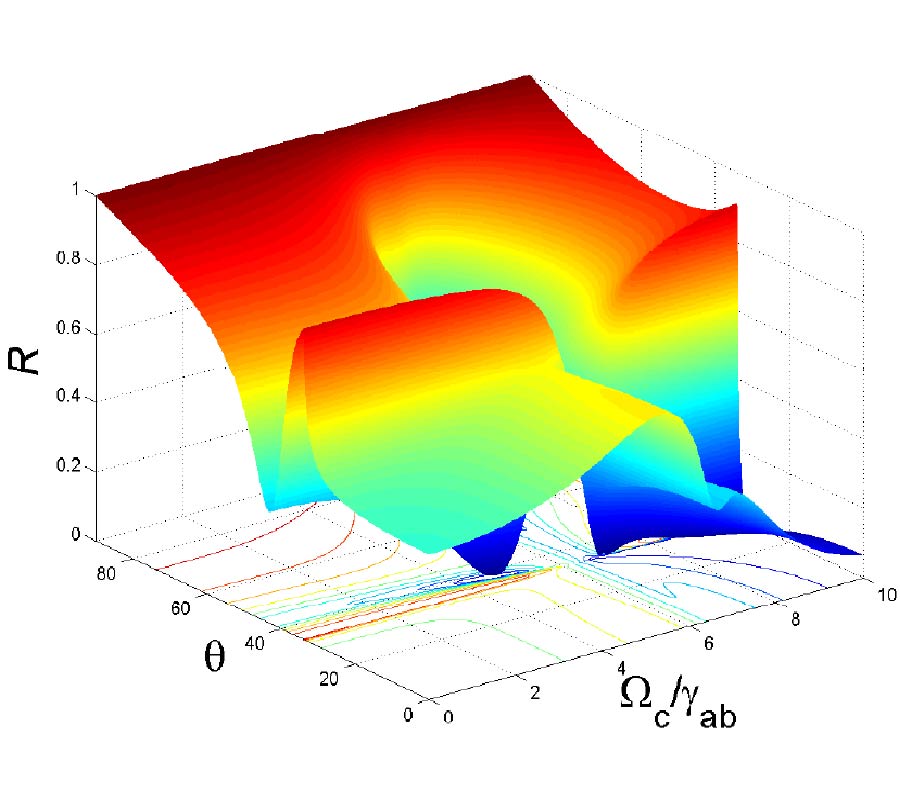 An EIT (electromagnetically induced transparency)-based prism coupler is suggested for realizing tunable reflection spectrum via quantum coherence of phases in a multilevel system, where destructive and constructive quantum interference will occur among multilevel transition pathways that are driven by two external control fields. In this prism coupler, a semiconductor-quantum-dot (SQD) medium layer, which can exhibit EIT and relevant quantum coherent effects, bounds the prism base, and the two external control fields are used to manipulate the probe field and the excited surface plasmon wave (on the SQD layer surface). Then the surface plasmon wave modes, which are generated by the probe field incident into this multilevel SQD medium layer, can be coherently tunable through the switchable quantum interference (destructive and constructive quantum interference) among the energy levels in the SQD systems. Such switchable quantum interference can be realized if we tune the intensities (i.e., adjust a proper intensity ratio) of the two control fields that drive the SQD multilevel EIT system. New switchable photonic devices, which could find applications in photonic microcircuits as well as some areas in integrated optical circuits, could be designed based on this quantum interference switchable surface plasmon resonance. 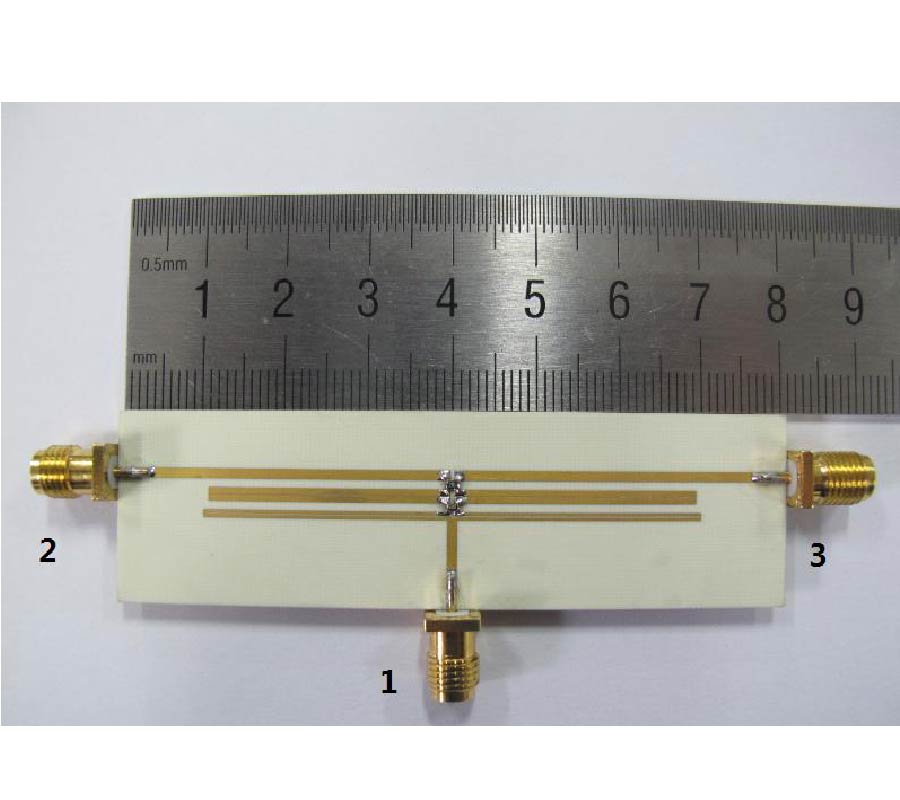 This paper presents a design approach for dual-band Wilkinson power dividers. Two pairs of parallel coupled-lines are used to replace the quarter-wavelength transformers in the conventional Wilkinson power divider to obtain dual-band operation. Using even- and odd-mode analysis, the closed-form design equations are derived for design parameters and design procedures of the proposed dual-band power divider are given. For verification purpose, a practical power divider, which operates at 1 GHz and 2.1 GHz with 3 dB power dividing ratio, is designed, fabricated and tested. The simulated and measured results are in good agreement.

In this paper, we present a novel 3rd filtering power divider with high in-band isolation. The proposed device employs six quarter-wavelength resonators and six internal isolation resistors symmetrically arranged to require the power division and filtering function. Based on the circuit topology, the multiple resistors can be integrated to obtain a good isolation and port impedance matching. Compared to the conventional power divider with bandpass response, the new device is easy to realize a high-order design with a good isolation. For demonstration, a prototype operating at 1.5 GHz with more than 20 dB in-band isolation is implemented. Simulated and experimental results agree well, validating the proposed methodologies. 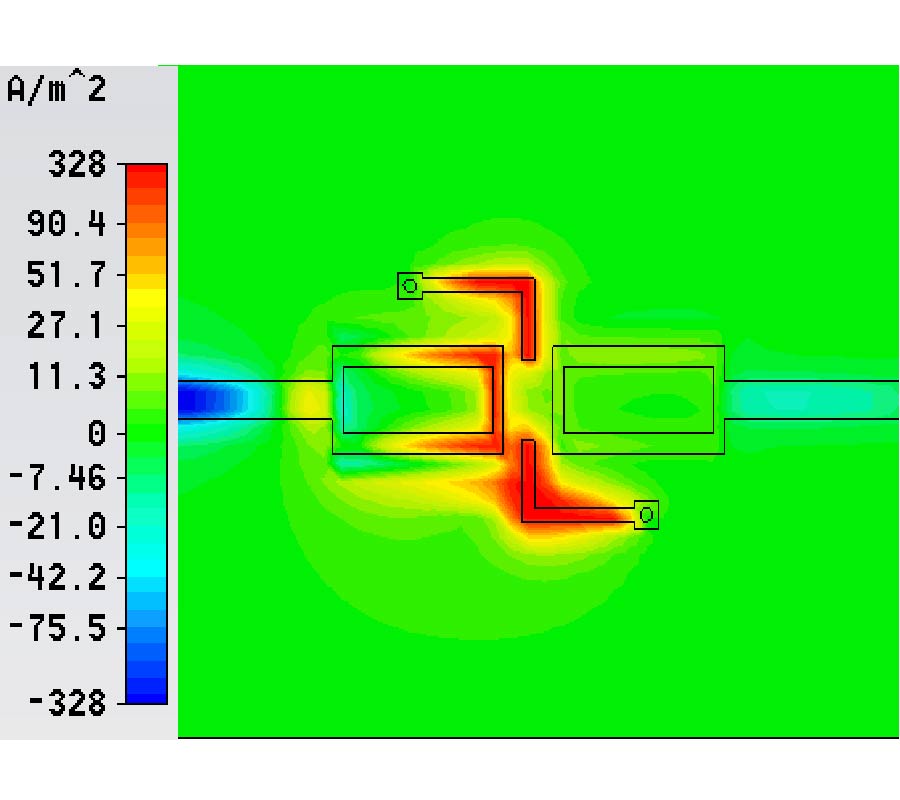 A novel ultra-wideband (UWB) bandpass filter (BPF) with notched band based on microstrip/slotline ring resonators is presented in this paper. The UWB BPF is fabricated with two microstrip ring resonators on the top copper layer and a slotline ring resonator on the bottom ground layer. Thus, an ultra-wide passband can be achieved owing to the coupling effects and microstrip/slotline transitions of these three ring resonators. Then, a notched band which is created at 8.0 GHz for satellite communication system is designed based on loaded short-circuited stubs. Both the simulated and measured results show that this compact UWB BPF has good performances of wide passband and notched band.

A novel coplanar waveguide (CPW)-fed tri-band monopole antenna for WLAN/WiMAX applications is presented. To get a compact antenna size, meandering and coupling technologies are used here. Meanwhile, with the loading method, the higher mode is used to cover the required band. The antenna has a very small size of only 18×28 mm2. The measured and simulated results show that the proposed antenna has three separate 10-dB impedance bandwidths of 220 MHz (2.36-2.58 GHz), 470 MHz (3.36-3.83 GHz) and 1460 MHz (4.83-6.29 GHz), which can cover all the 2.4/5.2/5.8 GHz WLAN and 3.5/5.5 GHz WiMAX bands. Good dipole-like radiation characteristics are obtained over the operating bands.

A folded printed quadrifilar helical antenna (FPQHA) with an integrated and compact feeding network is proposed. The axial length of the proposed antenna is miniaturized of about 54.7% than the conventional PQHA by folding the helix arms into several elements. A T-junction power divider combining with two Wilkinson power dividers is utilized to feed the antenna. A fabricated prototype of the FPQHA using the compact feeding network is presented. The measured positive gain bandwidth covers 380-430 MHz with the reflection coefficient below -20 dB, axial ratio below 1.5 dB and a half-power beamwidth of about 120˚. Details of the proposed antenna design and experimental results are presented and discussed. 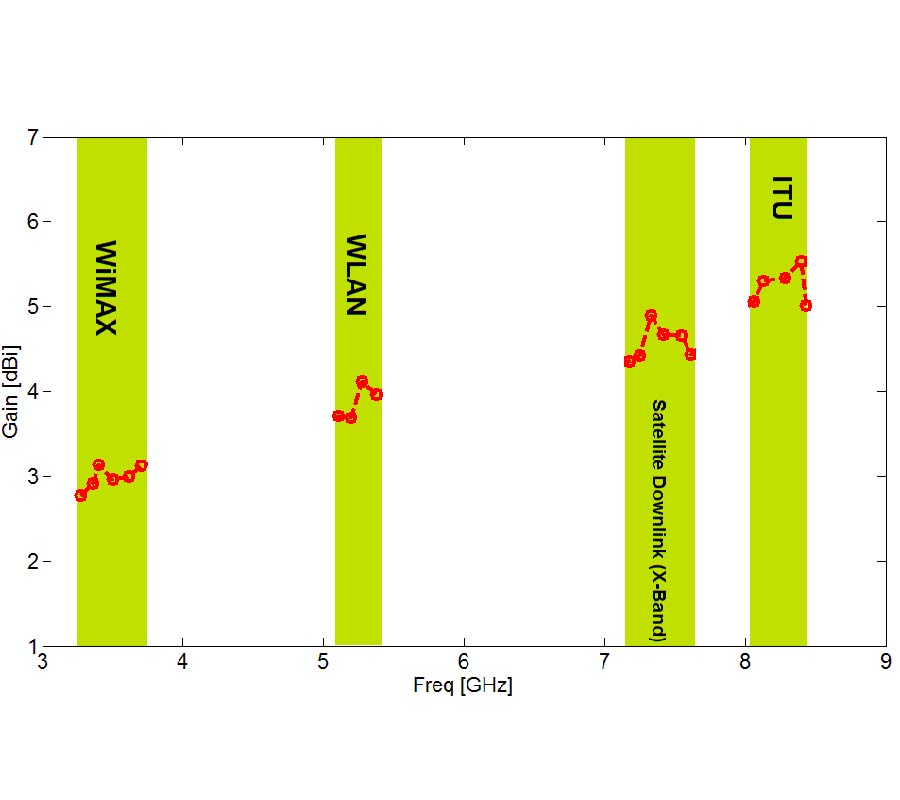 In this paper, a compact quad-band planar inverted-F antenna (PIFA) for wireless communication systems is presented. The proposed PIFA consists of a radiating patch with a hook-shaped slot and a modified ground plane with pair of square-ring and rotated I-shaped slots. The antenna is fabricated on an FR4 substrate with dielectric constant of 4.4. By cutting a hook-shaped slit at radiating patch, good dual-band property can be achieved which covers 3.5 GHz worldwide interoperability for microwave access (WiMAX) and 5.2 GHz wireless local area network (WLAN) frequencies. In addition, by using a modified ground plane with a rotated I-shaped an the pair of square-ring slot, additional resonances at the higher frequencies are generated which suitable for 7.25-7.75 GHz downlink of X-band satellite communication systems and 8.02-8.4 GHz international telecommunication union (ITU) applications. Good return loss, antenna gain and radiation pattern characteristics are obtained in the frequency band of interest. The proposed antenna has a small dimension of 24×3×1.6 mm3.

In this paper, a compact tri-band microstrip bandpass filter (BPF) using tri-section stepped-impedance resonators (TSSIRs) with open stub line and zero-degree feed line is presented. Three tunable passbands are achieved by changing the ratio of impedance. By adding the open stub line, the frequency responses of tri-band at 2.4 GHz/3.5 GHz/5.2 GHz can be obtained precisely. With a proper length of the cone-shaped zero-degree feed structure, we can obtain transmission zeros in stopbands and better return loss in passbands. The proposed tri-band BPF has high selectivity and is simple in fabrication. 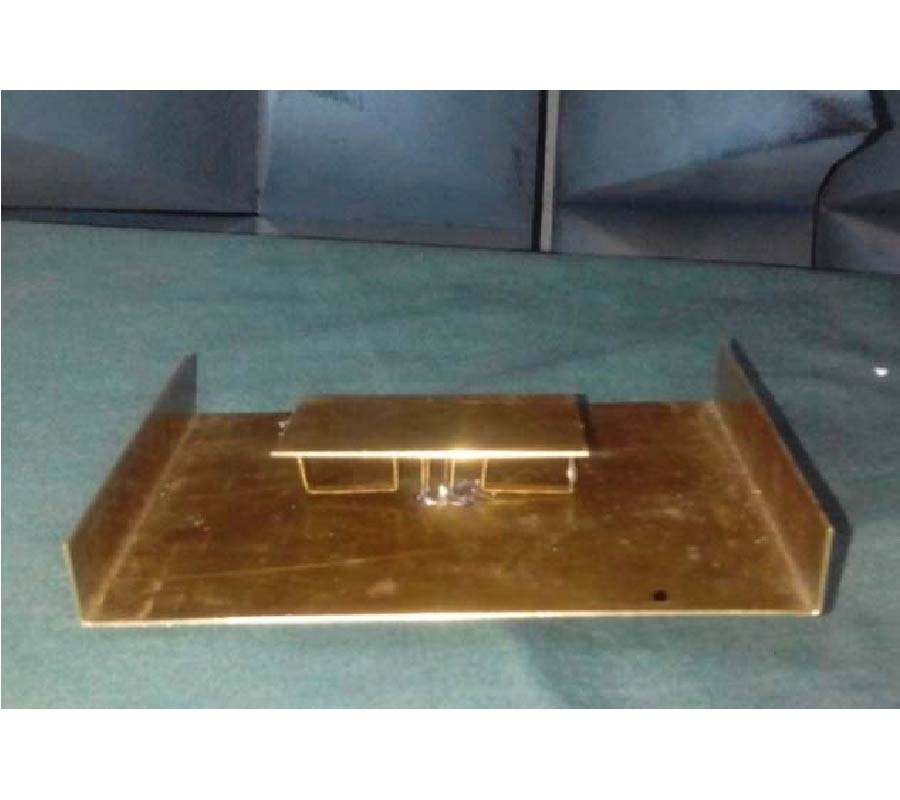 A wideband unidirectional patch antenna with two meandering strips and a Г-shaped feeding structure is designed. The investigation shows that the antenna achieves an impedance bandwidth of 54.2% for VSWR ≤ 2 and a stable gain of around 9 dBi. The far field radiation patterns with low cross polarization which levels are less than -27 dB, low back radiation and symmetrical E-and H-plane patterns are obtained over the whole operating frequency range. 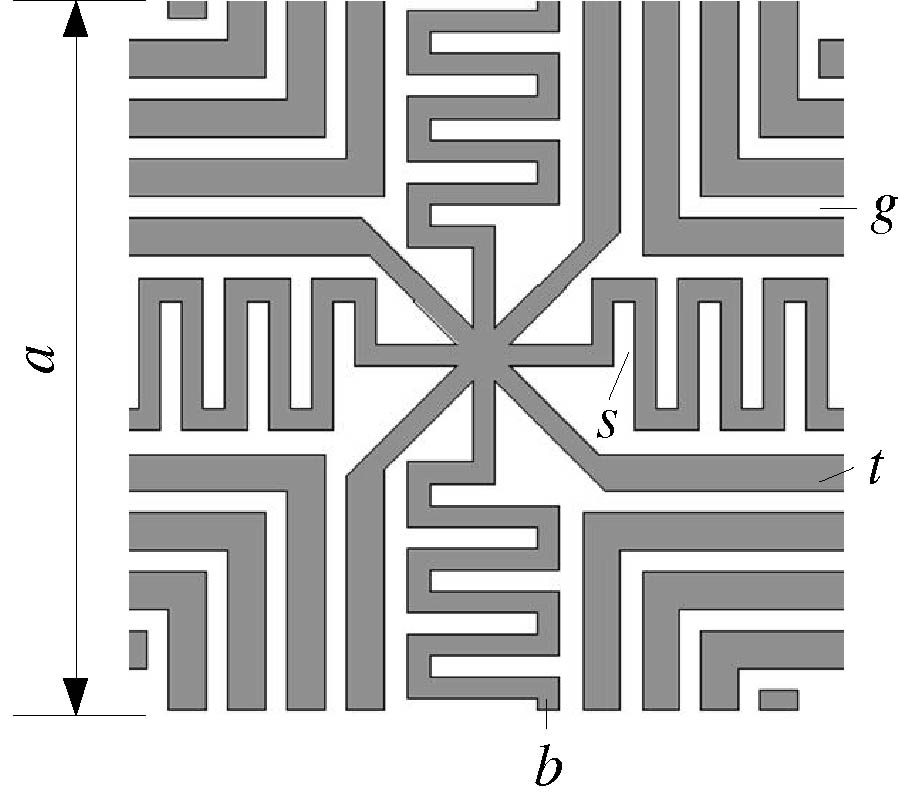 The radiation and propagation characteristic can be improved by the microstrip structure of the electromagnetic band-gap, which is becoming miniaturized today. In order to reduce the influence to the width of the band-gap brought by the miniaturization of the UC-EBG structure, a novel UC EBG structure is brought out. The band-gap width is guaranteed, meanwhile, the unit length is reduced to 0.1λg. Results of measurement indicate that this structure is effectively miniaturized, has an excellent performance, and can be used in the antenna or microwave circuit fields.

A new microstrip ultra-wideband (UWB) bandpass filter (BPF) with dual sharply rejected notched bands based on E-shaped resonator is proposed in this paper. The basic UWB BPF is designed using two microstrip interdigital coupled lines and one rectangular patch multiple-mode resonator (MMR). Then, to achieve dual band-notched performance, the proposed dual-mode E-shaped resonator is investigated and coupled to the rectangular patch multiple-mode resonator of the basic UWB BPF. To validate the design theory, a microstrip UWB BPF with two notch-bands centered at the frequencies of 5.8 GHz and 8.0 GHz, respectively, is designed and fabricated. Both simulation and experimental results are provided with good agreement. 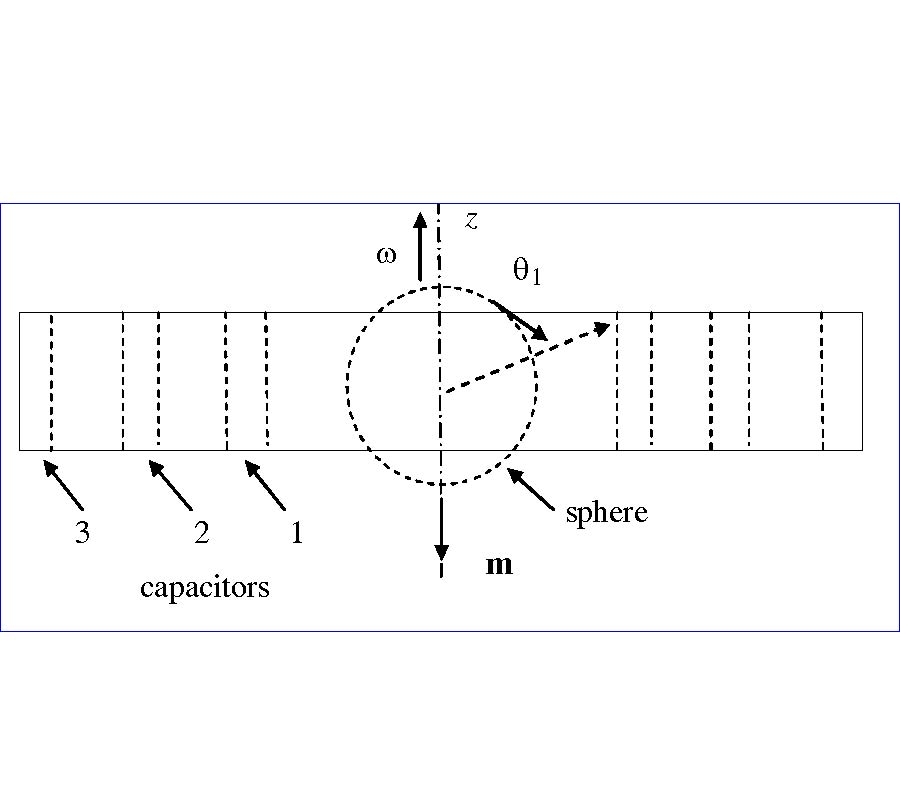 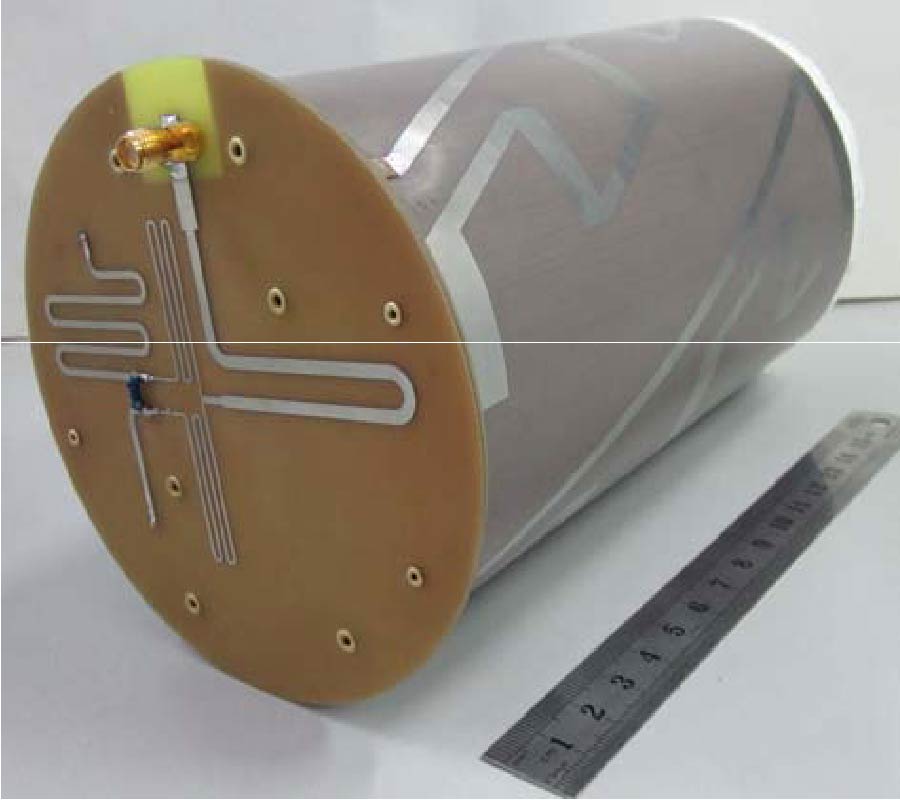 A miniature folded printed quadrifilar helical antenna (FPQHA) using a novel compact feeding network is proposed. Folding and meandering techniques are used to obtain 66% of size reduction for the axial length of the printed quadrifilar helical antenna. A compact feeding network using an out-of-phase power divider based on double-sided parallel-strip lines and a Wilkinson power divider is designed. A fabricated prototype of the FPQHA employing the compact feeding network is presented. The measured positive gain bandwidth is from 380 MHz to 425 MHz with a reflection coefficient less than -20 dB and an axial ratio below 2 dB. The measured maximum gain is 3.08 dBic at 395 MHz with a half-power beamwidth of 1500. With good radiation performance and integrated feeding network, the proposed antenna can become a better candidate in satellite and mobile communications. 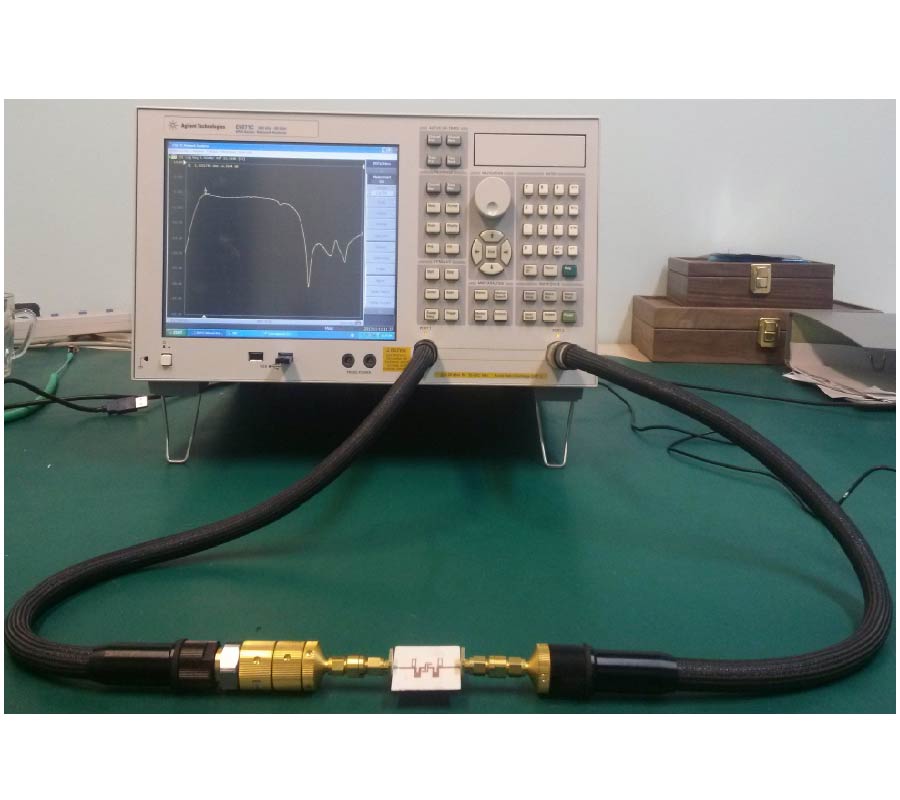 In this paper, complementary split ring resonators (CSRRs) as band-stop elements are used in combination with coupled microstrip lines as high and low pass elements to design and fabricate very compact bandpass filter (BPF) having controllable characteristics. The proposed filter provides several advantages such as compactness (occupying area less than 0.1λg × λg in which λg is calculated at center frequency of pass band), sharp rejection, low insertion loss (IL less than -8.5 dB in all of the bandwidth), good return loss (RL 3-dB bandwidth of roughly 2 GHz from 0.7 GHz to 2.7 GHz i.e. more than 115% FBW) and low cost. Defected Microstrip and Ring Resonator Structures have been used for eliminating the created spurious pass band in upper frequencies. The simulation results have been done with full-wave softwares i.e. CST and HFSS by time and frequency domain solvers, respectively. Also, the equivalent lossless lumped circuit of total structure has been obtained and simulated by ADS software. These simulated results show good agreements with experimental ones.

A new ultra-wideband antenna based on a uniform narrow slot is proposed. The slot radiator is fed by a pair of differential microstrip-lines, to implement a balanced and vialess antenna. The multiple-mode resonances of the radiator are excited simultaneously to form an ultra-wideband radiation, by optimizing antenna dimensions and port impedance. Comparing with other ultra-wideband slot antennas, this antenna has improved radiation patterns and low cross polarization due to its symmetry in structure. Antenna samples are designed and fabricated for verification. The measured impedance bandwidth has successfully achieved a fractional bandwidth of 106% (VSWR < 2.5). The radiation patterns are also measured and agree well with the prediction.