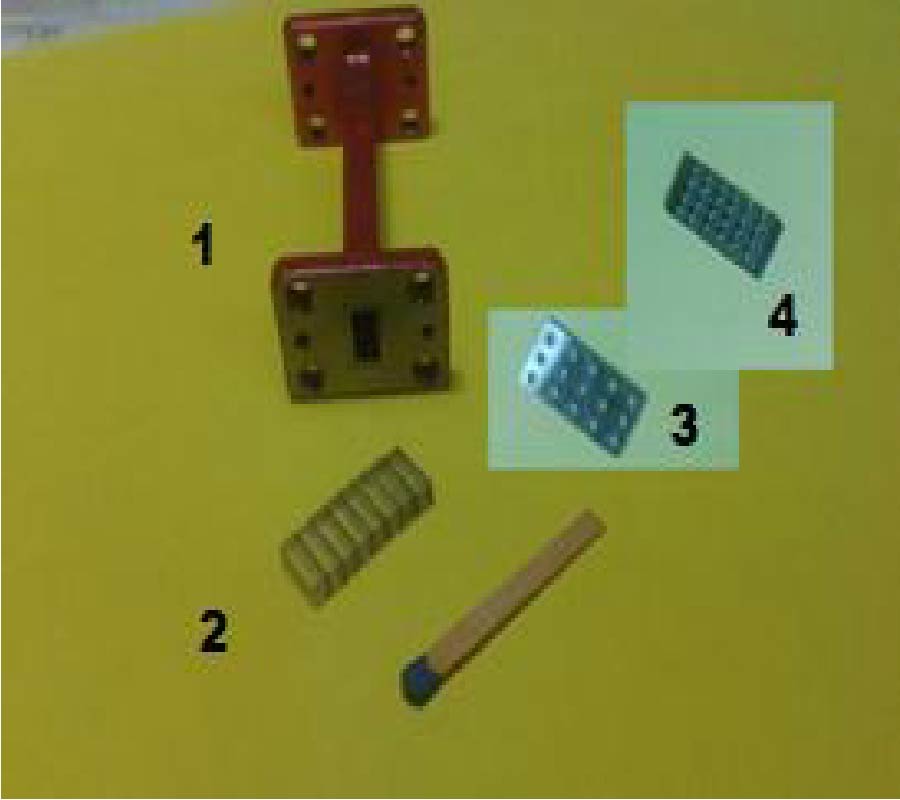 Borys Chernyshov and Sergey I. Tarapov

This paper is devoted to research of zone-spectra of one-dimension finite-element photonic crystal quartz/silicon in millimeter waveband. It is supposed that holes with dimensions in order of wavelength are fabricated in the silicon slabs. It is shown by the numerical and experimental investigations the possibility of using of effective medium approximation for the silicon element of photonic crystal. The paper introduces the simple phenomenological formula for calculation of effective permittivity of perforated silicon slab. 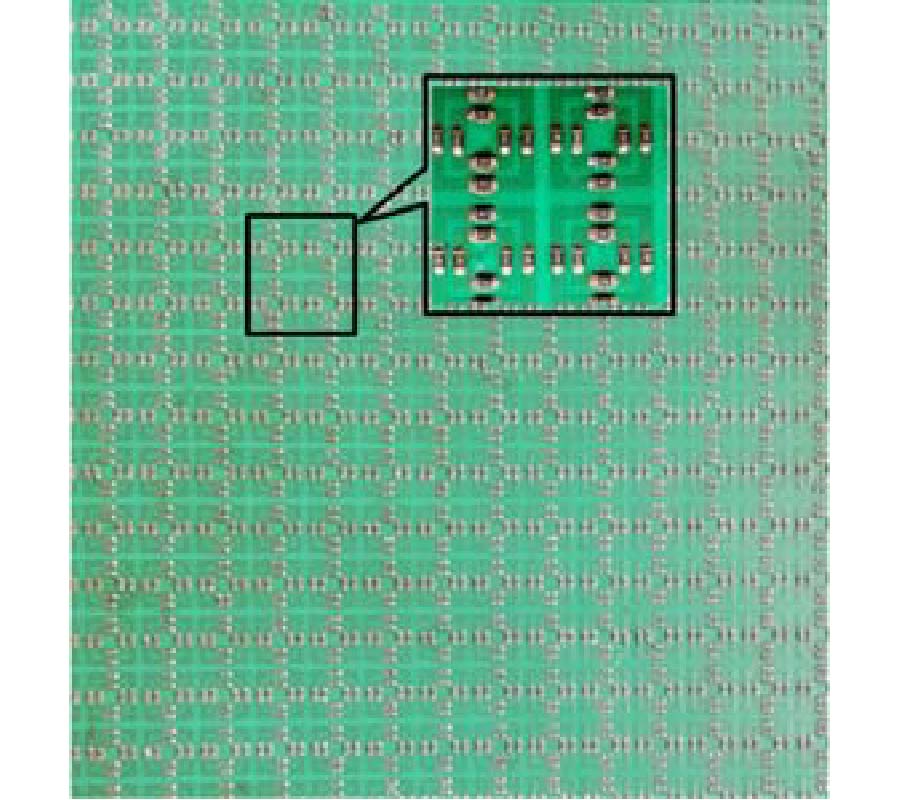 This paper designs a miniaturized and ultrathin absorptive/transmissive radome based on interdigital square loops. The thickness of designed radome is only 4.5 mm. The period of the radome is 10 mm, which is λ/17.5 (λ corresponding to the wavelength of center frequency of passband). In order to verify the transmission and reflection properties, a prototype is fabricated. Its effectiveness is verified by both synthetic experiments and measurements in the anechoic chamber. Furthermore, the oblique incidents are also evaluated for both the transmission coefficients and reflection coefficients.

A novel wideband horizontally polarized omnidirectional (HPO) antenna with coupling lines is proposed for indoor wireless base station applications. It consists of four microstrip dipoles, a tune disk with four square-shaped perturbations and four pairs of tapered parallel transmission lines. Each right arm of the microstrip dipole has been engraved with a coupling line. The measured 10 dB return loss (RL) relative bandwidth is 51% (1.6-2.72 GHz). In horizontally plane, the proposed antenna has an omnidirectional radiation pattern and anaverage gain of 2.4 dBi.

A wideband frequency selective surface (FSS) with a sharp band edge is proposed. The periodic cell includes a mushroom-like cavity and four L-type slots etched on the top and bottom conductor claddings of the cavity. The measured results show that the proposed FSS operates at X band with a 12.5% bandwidth (7.85-8.90 GHz), in which the insertion loss is less than 3 dB. Comparing with the FSSs based on substrate integrated waveguide cavity, the proposed FSS not only realizes high selectivity, but also realizes a 55.8% reduction in cell size. 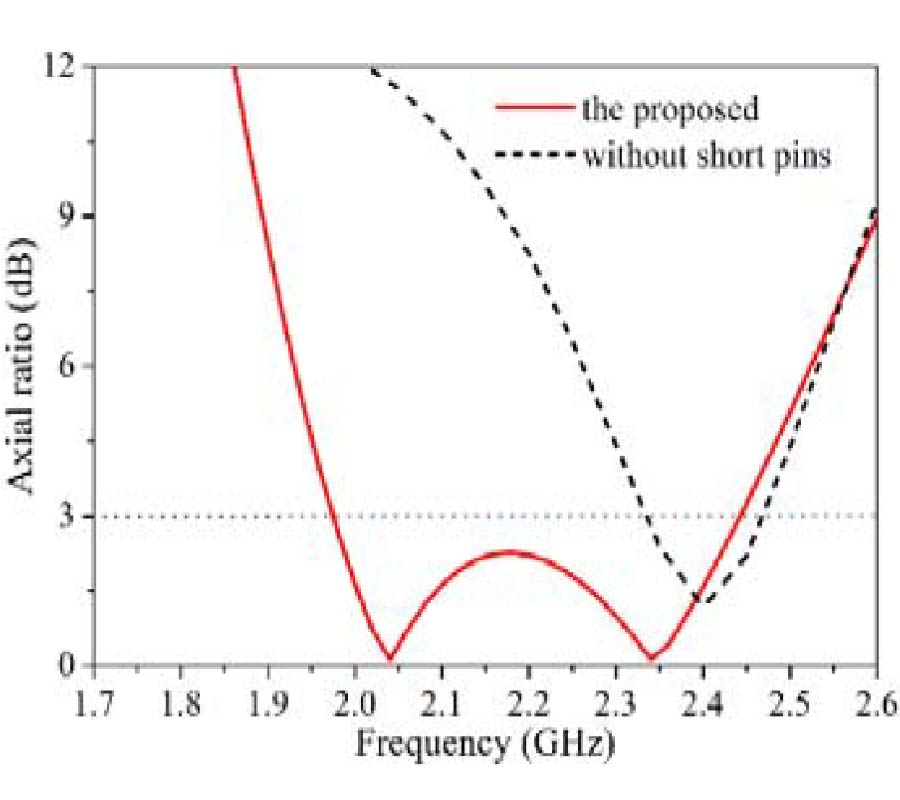 In this letter, a design for broadband circularly slotted patch antenna fabricated on a single-layered printed circuit board (PCB) with unidirectional radiation is described. It is fed by a simple center-fed feeding scheme. Unlike conventional slotted patch antennas, the proposed antenna is loaded with four short pins such that both matching and axial-ratio (AR) bandwidths are improved. In addition to realize the CP radiation at higher frequencies, a cross slot with different arm lengths, which is cut from the center-fed patch is used. Then, the proposed antenna operates as magnetic dipoles to generate circular polarization at low frequencies after four short pins are added to connect the patch to the ground. Thus, by combining the two modes, bandwidths of 30.2% (1.83-2.48 GHz) for |S11| < -10 dB and 21.2% (1.98-2.45 GHz) for axial ratio (AR) < 3 dB around the center frequency of 2.15 GHz are measured. Moreover, stable gain of over 8 dBic and good radiation patterns are also observed across the operating band.

A Broadband Circularly Polarized Antenna Based on Cross-Dipoles

In this paper, based on cross-dipoles, a right-handed circularly polarized (RHCP) antenna with both broad impedance and axial-ratio (AR) bandwidth is proposed. Moreover, metal vias and branches are loaded to the cross-dipoles aiming to decrease the size of the antenna. The measured results show that a broadband impedance matching bandwidth ranging from 1.83 to 3.42 GHz for S11 less than -10 dB is obtained. Meanwhile, the 3-dB axial-ratio bandwidth is more than 29.0%, and the peak gain of the antenna is about 7.3 dBi with small variation at 2.5 GHz. A prototype is fabricated and measured for validating the design. The good agreements between the simulated and measured results show that the proposed antenna maybe a good candidate in circularly polarized (CP) antenna family.

The objective of this paper is to propose an improved approach based on a novel non-intrusive method for easily assessing the high frequency CW EM radiated susceptibility of an electronic system by characterizing its nonlinear electromagnetic effects. For this purpose, we have developed a specific harmonic frequency detection system coupled with a mode stirrer reverberating chamber. We describe the principles of the method and study a generic device board which is representative of a real electronic system. We evaluate the EM susceptibility of a micro controller in full functional mode and the data exchanges with two types of external 8 Mb SRAM memories. We observe the EM radiated susceptibility of this device by a functional EMC analysis method; then we measure the harmonic frequency content and make a correlation with the EM susceptibility results. We obtain significant differences between the two memory devices, as a consequence of their different managements of internal voltage over stress. We are well aware that this method is currently not validated in industrial environments EMC. In this paper, we only want to show that the appearance of the highest harmonic level occurs only when DUT has the highest functional failure. 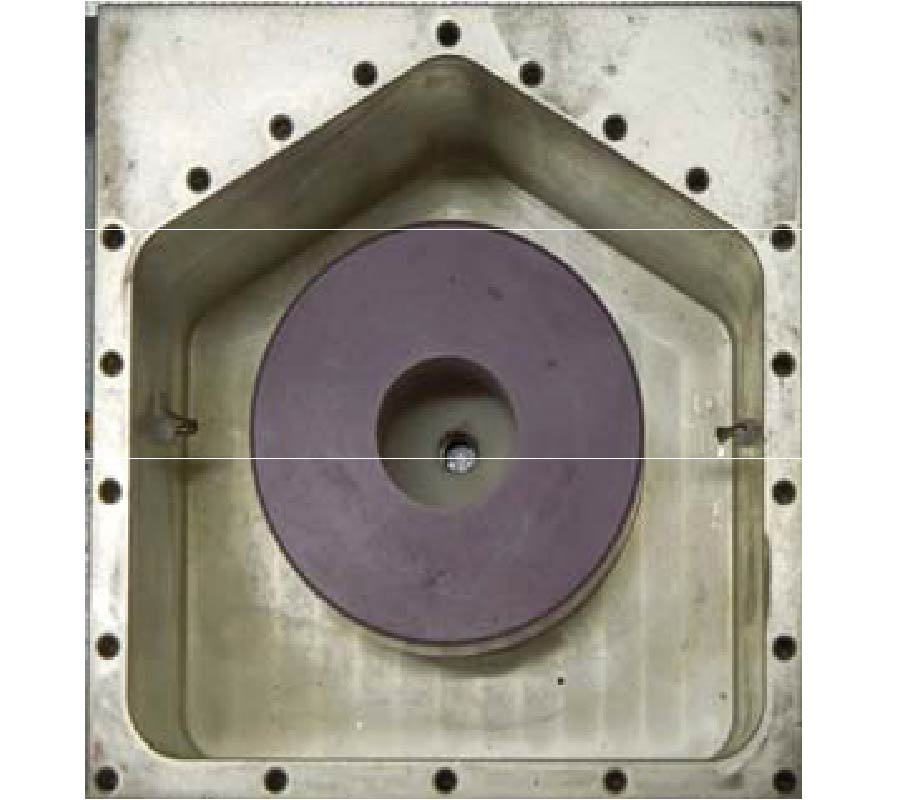 We present a revised Cauchy method to accurately extract the high quality factor of dielectric resonators from measurements. Since the losses displace all the zeros and poles of the transfer function horizontally to the left in the complex plane, the accurate evaluation of the unloaded quality factor of microwave resonators can be achieved based on the complex frequency transformation. The results show that if the three-point method is employed, the accuracy of the quality factor values deteriorates when the input/output coupling is strong. Nevertheless, a nearly constant factor value can be obtained by our proposed technique whether the input/output couplings are weak or strong. This algorithm provides an alternative method to measure the unloaded quality factor when the signal-to-noise ratio is high.

A novel CPW-fed dual-band multiple-input multiple-output (MIMO) antenna with a common radiating element for WiMax/3.5G and WLAN/5.8G is proposed in this paper. The proposed MIMO antenna which has dimensions of 30 mm×30 mm×1.6 mm consists of an irregular ring-shaped ground plane and a shared radiating element. Furthermore, this MIMO antenna has a good performance in the port isolation by using a T-shaped structure and four slots on the ground. The measured bandwidths of the designed MIMO antenna are 3.32-3.74 GHz and 5.45-6.05 GHz. In the meantime, the measured isolation of the MIMO antenna is higher than 20 dB in both bands. 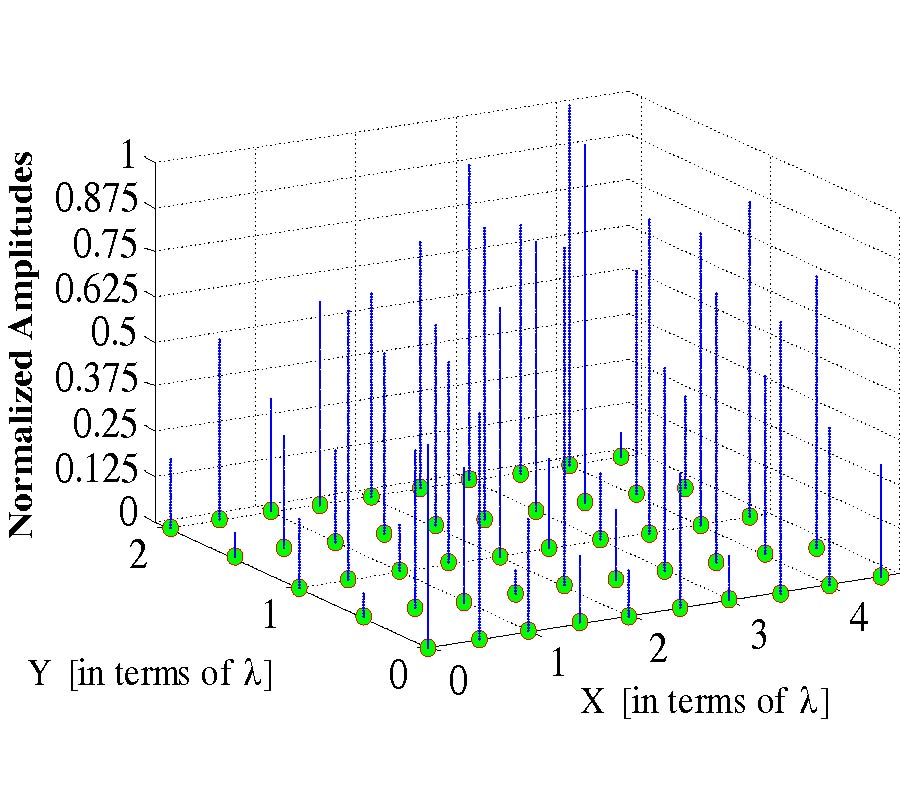 In this paper a pattern synthesis method based on Differential Evolution Algorithm (DE) is presented to generate dual beam patterns from a planar array of isotropic antennas. These are cosec2 pattern and pencil beam pattern. These patterns are obtained by finding out an optimum set of common elements amplitude (for cosec2 pattern as well as a pencil beam pattern), and a set of phases, for cosec2 pattern only. 4-bit discrete amplitudes and 5-bit discrete phases are used to reduce the design complexity of feed network. The beam patterns have been generated in two different azimuth planes instead of one particular plane. The evaluated excitations are also verified by considering a range of arbitrarily chosen azimuth planes, where the patterns are generated with some minor variations of the desired parameters. Obtained results clearly established the effectiveness of the proposed method. 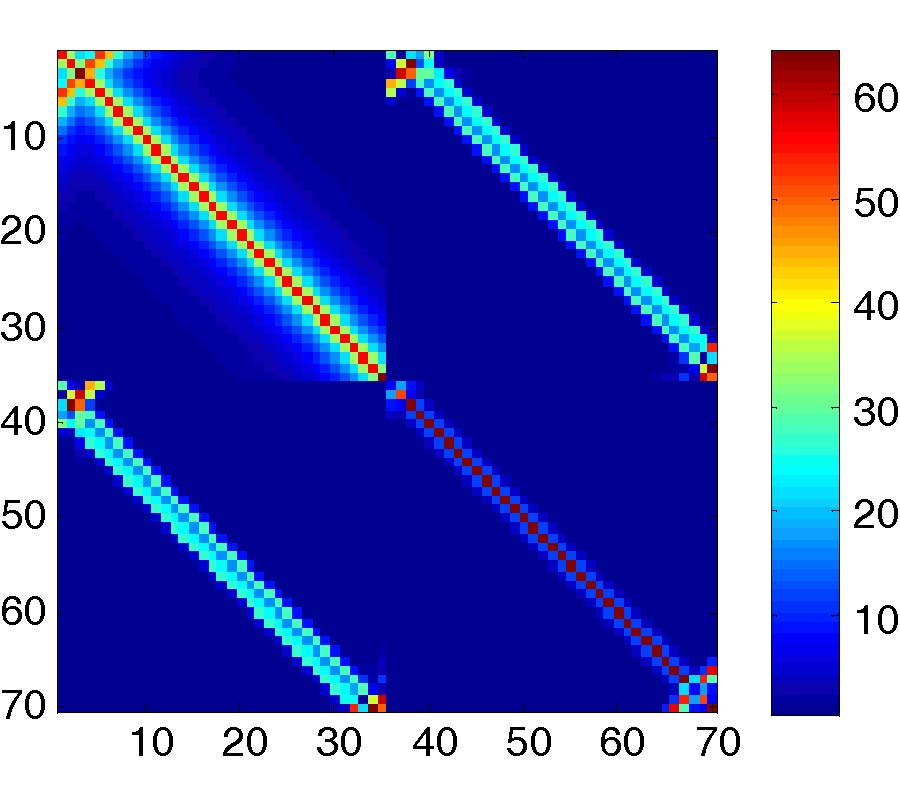 A novel implementation of N-way Wilkinson power divider using series and parallel combination of coaxial cables has been proposed in this paper. This arrangement results in a very compact power divider at VHF and lower frequencies, has good isolation between all the ports and is capable of handling high power with a low insertion loss. Frequency tuning and phase equalisation are easily accomplished using this technique. The measured results on fabricated 7-way and 4-way power dividers exhibited good input and output matching as well as amplitude and phase balance with an overall length of less than λ/8 at 221 MHz, with potential for further reduction in length. 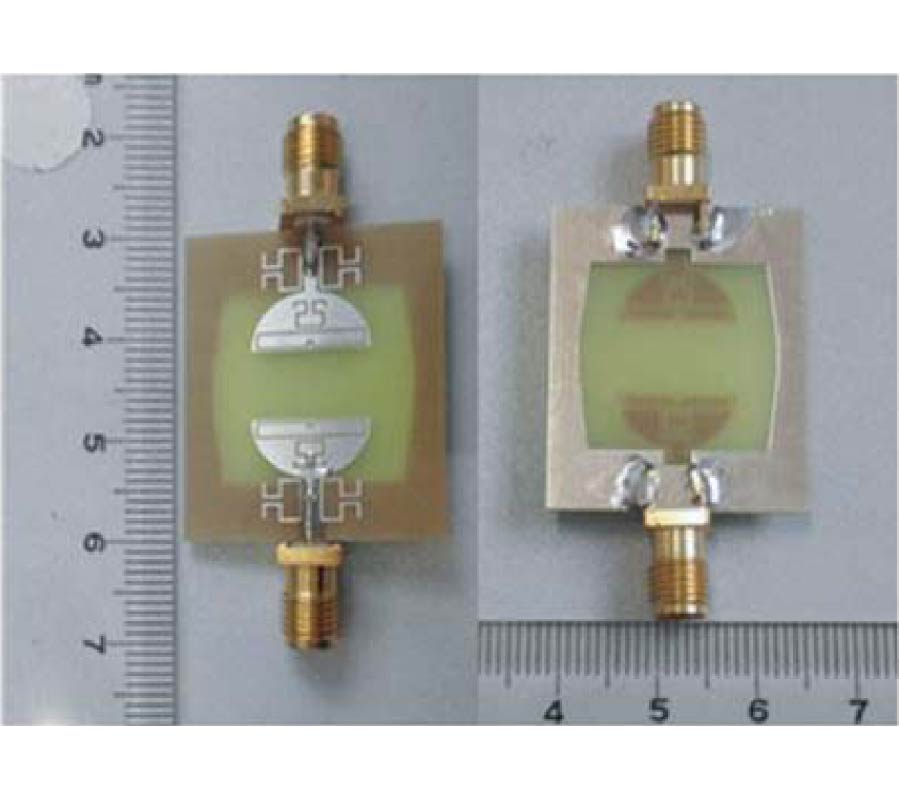 A compact half-elliptic monopole antenna with triple notched-bands for UWB application, which is driven with differential feeding systems, is proposed. The basic antenna consists of two symmetrical half-elliptic patches and a modified ground plane. To reject the 5.5-GHz WLAN band effectively, two pairs of Ω-shaped strips are placed as parasitic elements close to the feedline. By introducing rectangular SRRs and an Ω-shaped slot on the radiators, the operating bands of 3.5-GHz WiMAX and 8-GHz ITU can be notched, respectively. Compared with conventional singleended feed antennas, the proposed differential-fed antenna can achieve better polarization purity, especially in the high-frequency band.

In this work, an analytical expression is derived for the radial distribution of the quasi-static vertical magnetic field of a current-carrying large circular loop placed on a homogeneous earth. The obtained expression results from applying a rigorous procedure, which leads to cast the Hankel transform describing the vertical magnetic field component into a form consisting of two elliptic integrals and a fast-convergent sum of spherical Hankel functions. The derived solution ensures the same degree of accuracy as the finite difference time domain method, but, as a purely analytical formula, has the advantage of requiring less computational time. Numerical results are presented to illustrate the validity of the developed formulation.

A compact miniaturized frequency selective surface (FSS) withstable resonant frequency is proposed in this letter. The proposed FSS is composed of four spiral triangles connected in the middle of the unit cell, symmetrically. Simulated results show that the dimension of the element is only 0.0558λ0×0.0558λ0, and reduction in FSS size is up to 97.7% with respect to conventional cross-dipole FSS operating at the same frequency of 2.7 GHz. Also, the proposed FSS has great angular stability, and the resonant frequency deviation keeps below 0.4% for both TM and TE polarizations of 60° incident angle.

A novel polarization conversion metasurface (PCM) is proposed and applied to radar cross section (RCS) reduction. The proposed design has the advantage of simple geometry while simultaneously reducing RCS over broadband. The metasurface is created by the combination of an oblique split ring resonator (SRR) and a cut-wire resonator, which is capable of converting a linear polarization state into its orthogonal one. The simulation results show that the 10 dB bandwidth of polarization conversion is obtained in wideband from 9.4 to 19.2 GHz, with an average polarization conversion ratio (PCR) of nearly 100%. Due to the high PCR, RCS reduction of 10 dB can be realized over 60% frequency bandwidth with respect to the equal-sized PEC ground plane. The maximum reduction is 32.8 dB. To validate the simulation results, prototypes of the PCM are fabricated and measured. Excellent agreement between simulations and measurements is achieved. 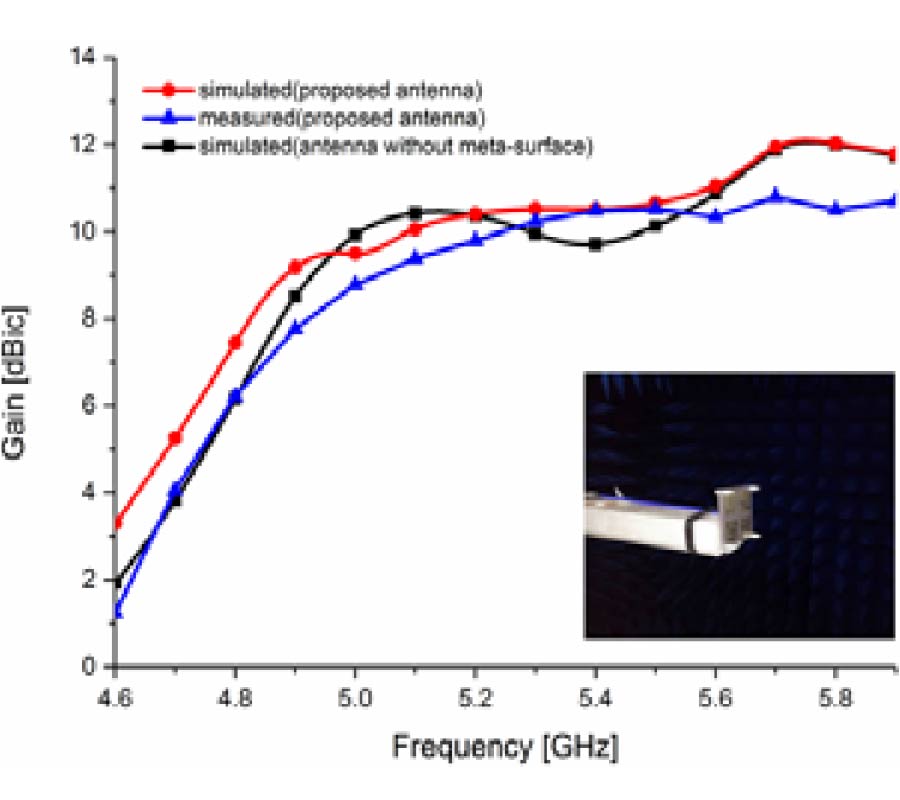 A wideband sequential-phase-feeding circularly polarized (CP) patch array is proposed in this paper. A well-designed meta-surface is placed above the array to enhance its impedance and axial ratio (AR) bandwidths. The proposed patch array has an overall size of 1.275λo×1.275λo×0.0935λo at 5.1 GHz. Measured results show that the impedance bandwidth (|S11|<-10 dB) of the array is 24.26% from 4.74 GHz to 6.05 GHz, and its 3 dB axial ratio bandwidth is 19% from 4.75 GHz to 5.75 GHz. The measured gain of the array at 5.7 GHz is 10.8 dBic. The measured results agree well with the simulated ones.