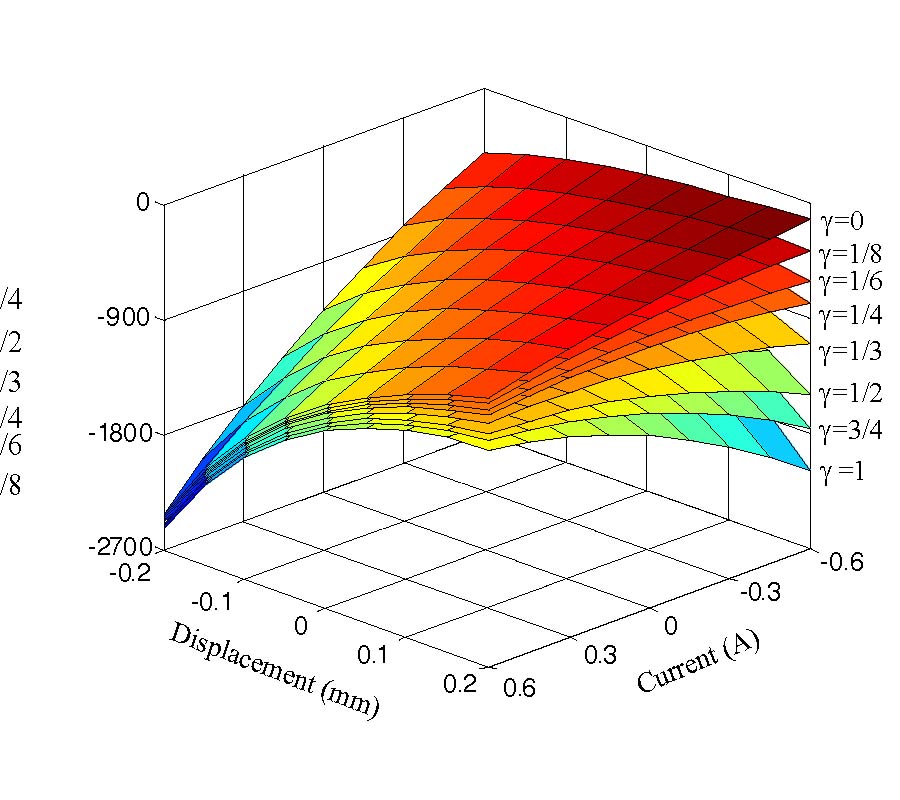 In this paper, an asymmetric thrust magnetic bearing (MB) design principle and method are introduced. Different from the general design method of magnetic bearing, the asymmetric magnetic bearing design method focuses on the effect of asymmetric factor. A permanent magnet biased asymmetric hybrid thrust magnetic bearing (AHTMB) with secondary air-gap is designed in detail. A multi-objective optimization is conducted with genetic algorithm (GA) to get smaller mass and less loss. According to optimized model parameters, magnetic field distribution, stiffness and effect of asymmetry factor on stiffness are also analyzed. For stability of the system, equivalent stiffness and equivalent damping and current characteristics are deduced. Based on the analysis results and design methods, appropriate asymmetry factor asymmetric can be chosen to satisfy the different bias force requirement. With small number of coils and current, AHTMB with secondary air-gap is beneficial for decreasing the copper loss and enhancing dynamic performance of control system. 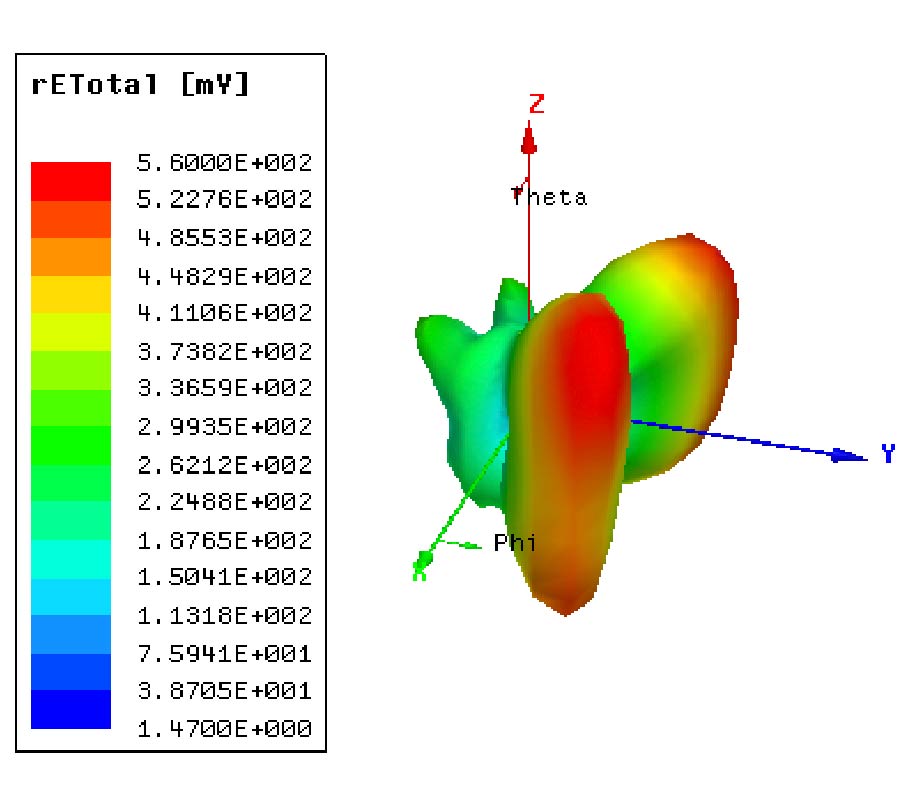 In this paper we present an approach to reduce the cavity resonant edge effects in printed circuit boards (PCBs) and semiconductor packages. Power supply noise, in the form of fast changing currents (di/dt), traverses the power-return paths of PCBs and semiconductor packages using power vias. The cavity effects produce considerable level of noise along the edges of PCB and integrated circuit (IC) package power planes due to signal coupling between vias and reflection from PCB edges with transient currents. The cavity effects also amplify the electromagnetic radiation from PCB edges, which are major sources of EMI/EMC problems in electronic devices. By using absorbing material and decoupling capacitors (de-caps) on power distribution networks (PDNs), we observe considerable mitigation in impedance noise, signal noise and electromagnetic interference/compatibility (EMI/EMC) issues caused by the cavity effects. In particular, simulation results show notable reduction of upper peak (anti-resonant) impedance noise and reduction in radiated emissions by as much as 20 dB. This article presents a comparative case-study using various models (Section 3) and report on their effectiveness to reduce the cavity effects. The models are listed as (1) "Original" model, (2) "Absorbing material along the edge" model, (3) "MURATA based De-cap only" model and (4) "Absorbing material along the edge w/ De-cap" model. The used capacitance ranges between 0.1 μF and 22 μF. The ESR and ESL range between 2 mOhm-20 mOhm and 238 pH-368 pH, respectively. Conclusively, we learn by adding absorbing material along the PCB edges with a few decoupling capacitors. The PDN impedance noise is improved, and EMI issues in PCBs and semiconductor packages suppress the cavity effects. 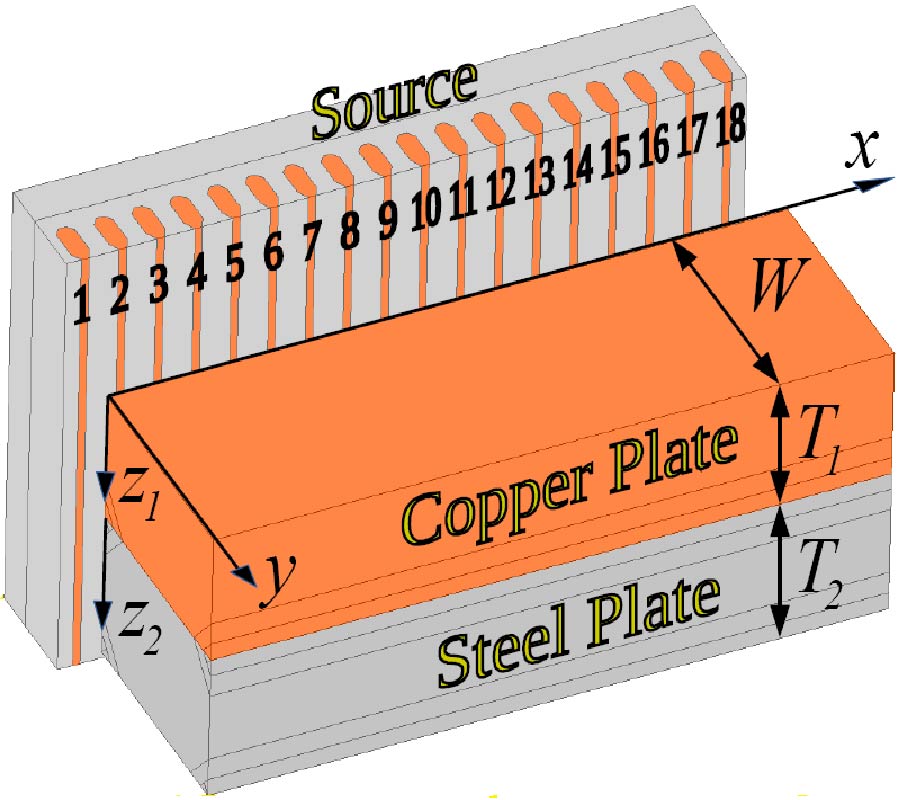 Harmonically Time Varying, Traveling Electromagnetic Fields Along a Plate and a Laminate with a Rectangular Cross Section, Isotropic Materials and Infinite Length

This article contains derivation of propagation factors and Fourier series for harmonically time varying, traveling electromagnetic fields in a plate and a laminate with rectangular cross sections, isotropic materials and infinite length. Different and quite general fields are taken into account on all boundaries. Choices of boundary conditions and continuity conditions are discussed. Certain combinations of types of boundary conditions make the derivation possible for a laminate. Comparisons are made between results of Fourier series and finite element calculations. 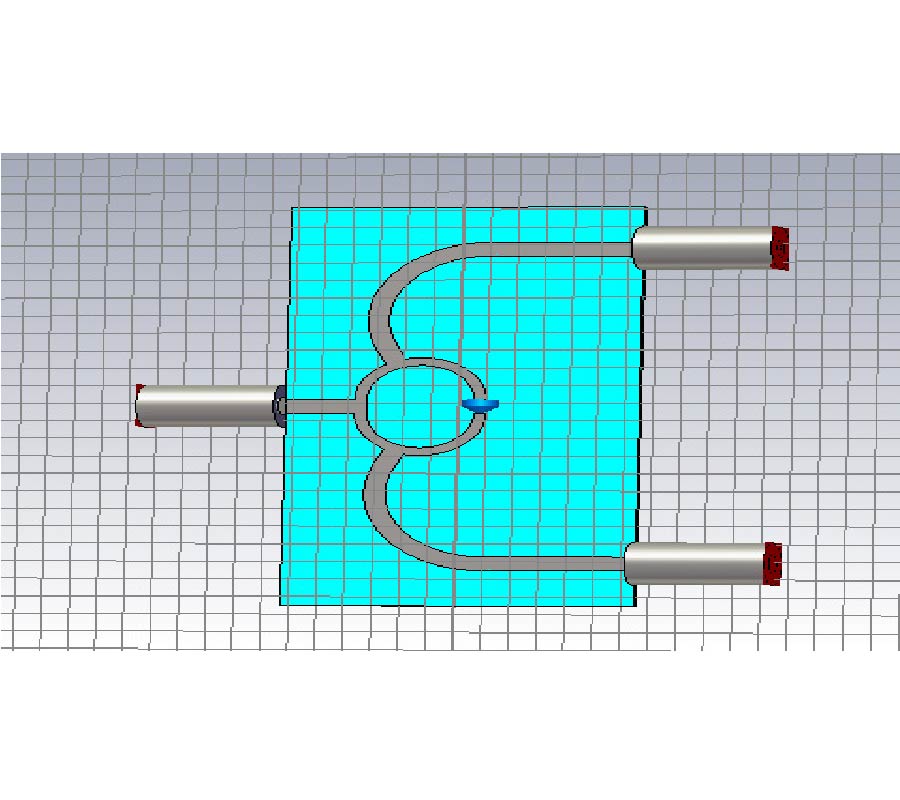 5G new spectrum radio access should support data rates exceeding 10 Gbps in most of its applications. An Ultra Wide Band (UWB) Ultra-high data rate Wilkinson power divider up to 6.9 Gbps for 5G new spectrum and CAR applications is presented in this paper. The step by step design procedure, optimization and implementation of this Wilkinson power divider in 20-30 GHz are completely done to achieve the optimum performance. The final fabrication results show the average of -14 dB of input matching, -20 dB of isolation of isolated Ports, -4.2 dB of coupling in output ports (considering 2 SMA connectors and transitions in each path), and linear phase variation of outputs in the whole bandwidth of 20-30 GHz. During the design procedure, a new and very useful coaxial to microstrip transition in K-band is designed, analyzed, developed and fabricated to achieve the best results. Also a complete study of time domain analysis with ultra-high data rate signal is presented to minimize the total reflection coefficient caused by the partial reflections from several discontinuities. To complete and validate the final fabricated Wilkinson power divider in ultra-high data rate application in 5G new spectrum, the extracted results of UWB-IR impulse radio with modulated ultra-high data rate signal up to 7 Gbps and in 20-30 GHz bandwidth is completely done. The measured results show that this fabricated Wilkinson power divider can handle a periodic modulated signal up to 7 Gbps which are valuable results for many applications in 5G and CAR systems. 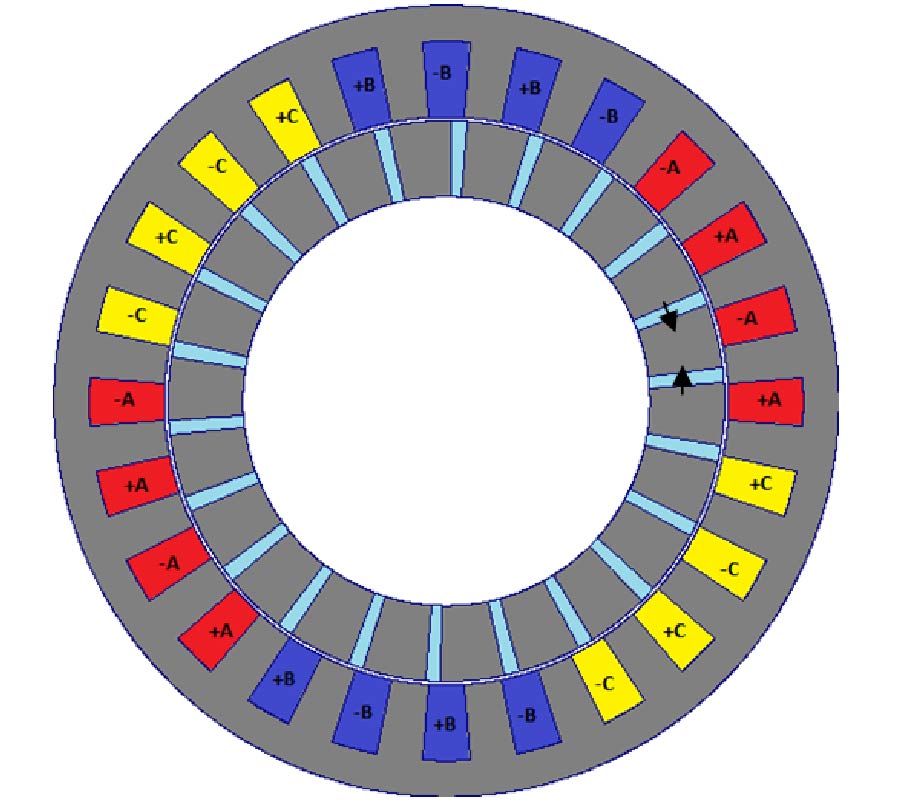 This article presents a novel contribution to the improvement of the analytic modeling of electrical machines using two-dimensional (2-D) subdomain technique with Taylor polynomial. To validate this novel method, the semi-analytical model has been implemented for spoke-type permanent-magnet (PM) machines (STPMM). Magnetostatic Maxwell's equations are solved in polar coordinates, and in all parts of the machine. The global solution is obtained using the traditional boundary conditions (BCs), in addition to new radial BCs (e.g., between the PMs and the rotor teeth) which are traduced into a system of linear equations according to Taylor series expansion. The magnetic field calculations are performed for two different values of iron core relative permeability (viz., 10 and 1,000) and compared to finite-element method (FEM) predictions. The results show that a very good agreement is obtained. 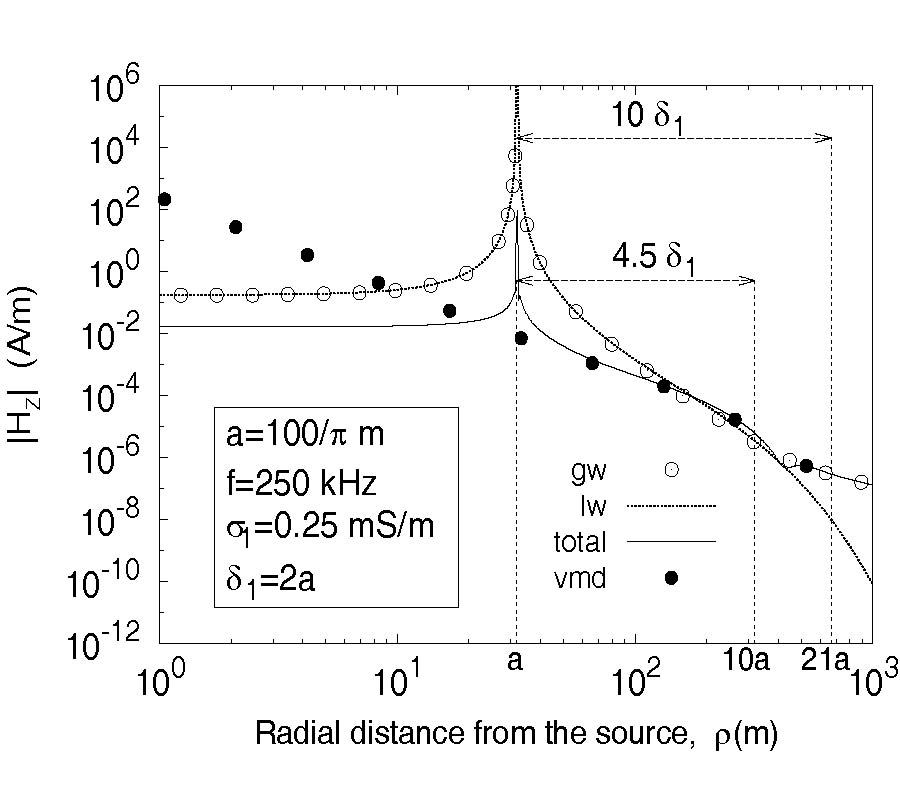 Loop Antennas with Uniform Current in Close Proximity to the Earth: Canonical Solution to the Surface-to-Surface Propagation Problem

In a recent study, the classical problem of a large circular loop antenna carrying uniform current and situated at the Earth's surface has been revisited, with the scope to derive a totally analytical explicit expression for the radial distribution of the generated magnetic field. Yet, the solution arising from the study exhibits two major drawbacks. First, it describes the vertical magnetic field component only. Second, it is a valid subject to the quasi-static field assumption, which limits its applicability to the low-frequency range. The purpose of the present work is to provide the exact canonical solution to the problem, describing all the generated electromagnetic field components and valid in both the quasi-static and non-quasi-static frequency regions. These two features constitute an improvement with respect to the preceding solution. The canonical solution, which is obtained by reducing the field integrals to combinations of known Sommerfeld integrals, is seen to be also advantageous over the previous numerical and analytical-numerical approaches, since its usage takes negligible computation time. Numerical simulations are performed to show the accuracy of the obtained field expressions and to investigate the behavior of the above surface ground- and lateral-wave contributions to the fields in a wide frequency range. It is shown that in the near-zone the two waves do not predominate over each other, while the effect of the lateral wave becomes negligible only when the source-receiver distance is far greater than the skin depth in the Earth. 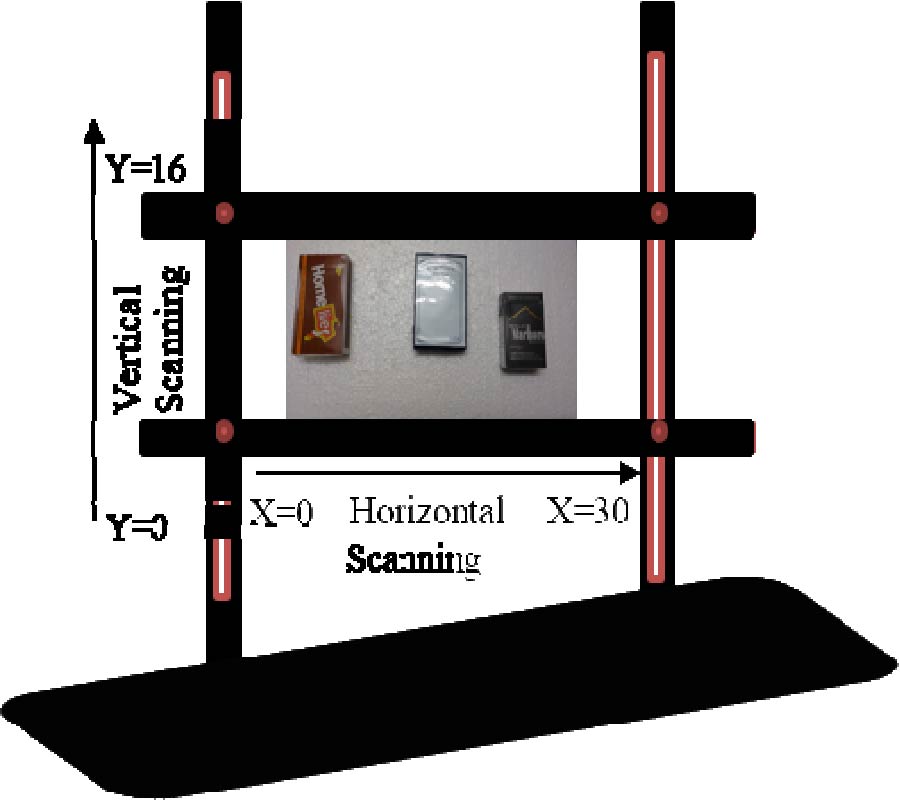 Development of an Adaptive Approach for Identification of Targets (Match Box, Pocket Diary and Cigarette Box) Under the Cloth with MMW Imaging System

Non-metallic objects, such as match box and cigarette box, detection and identification are quite an essential task during personal screening from standoff distance to protect the public places like the airport. Although various imaging sensors such as microwave, THz, infrared and MMW with signal processing techniques have been demonstrated by the researchers for concealed weapon detection, it is still a challenging task to detect and identify different types of small size targets such as a matchbox, pocket diary and cigarette box simultaneously. Therefore, in this paper, an attempt has been made to develop such an algorithm/methodology by which different types of small targets, such as a matchbox and cigarette box, which is fully or half-filled or empty and pocket diary at different orientations beneath various cloths can be detected and identified with an MMW radar system. For this purpose, an optimal method has been proposed to form an image, and after that, in post processing a novel adaptive approach for detection and identification of considered targets has been proposed. The data were collected by MMW system at V-band (59 GHz-61 GHz). The proposed algorithm/methodology gives s quite satisfactory result. 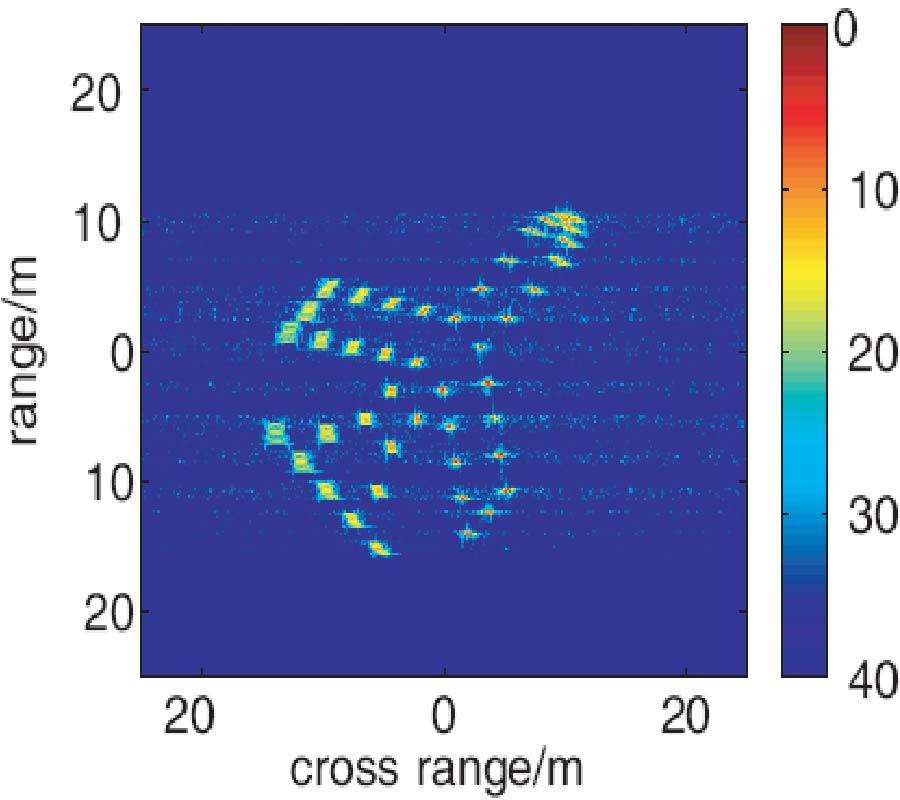 Range alignment plays an important role in the inverse synthetic aperture radar (ISAR) imaging. The performance of the traditional range alignment algorithms decreases when the migration through resolution cells (MTRC) is much severe. In this paper, a measure of MTRC is defined, and the effect of MTRC on range alignment is analyzed. Taking MTRC into account, a robust sub-integer range alignment algorithm is proposed. Firstly, each range profile is interpolated to remove the precision limitation of integer range resolution cell. Subsequently, the matrix formed by all the range profiles is partitioned into several matrix blocks on the slow-time domain. For each matrix block, the range profiles are aligned by minimizing the entropy of the average range profile (ARP). Finally, the matrix blocks are coarsely aligned using the maximum correlation method, followed by a fine alignment based on the minimization of the ISAR image entropy. The effectiveness of the proposed algorithm is validated by simulations and real-world data. Results demonstrate that the proposed method is robust against MTRC and can reduce the alignment error. The resultant ISAR image is much better focused. 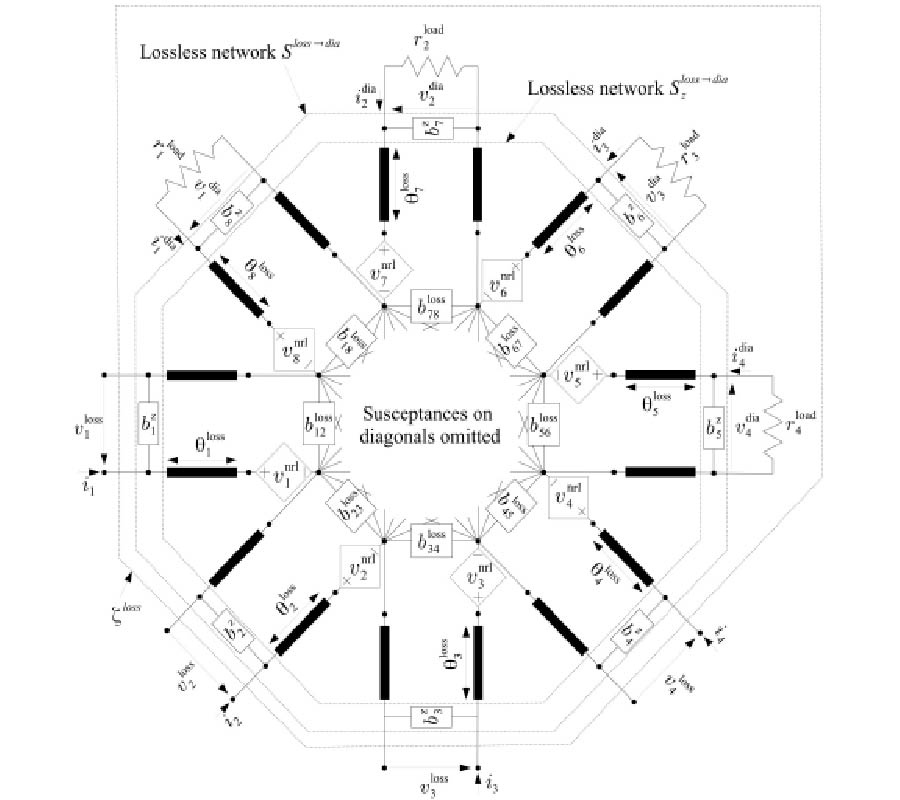