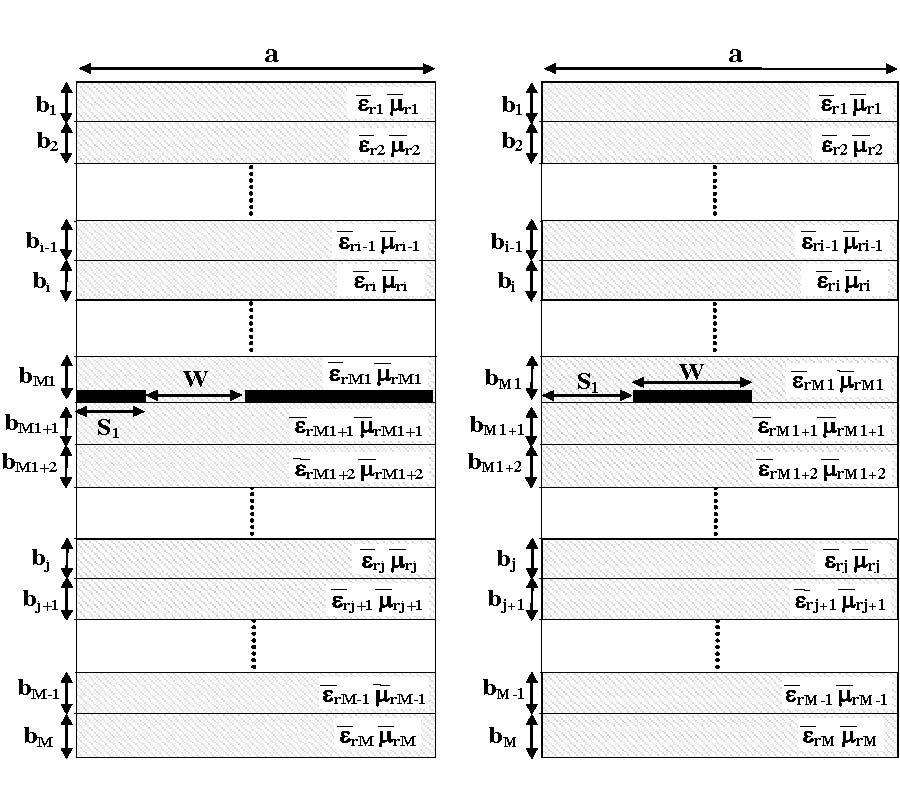 A flexible and reliable full-wave modal integral method is proposed to efficiently characterize planar transmission structures printed on multilayered isotropic/anisotropic substrates. Based on the mathematical concept of operators used in electromagnetism, it consists in determining the modal inner products obtained through the Galerkin's procedure via a proper choice of trial functions with metallic edge effects. To this aim, a fast and accurate nonuniform discretization algorithm is introduced for the first time, while using a new process to accelerate the convergence with regard to the number of areas of such inner products, thus significantly reducing the required CPU-time for planar transmission lines analysis. To demonstrate the efficiency of the proposed numerical integral approach, a successful comparison was achieved through a close agreement with published data.

The continuous and discrete radiation spectrum of a highly dielectric constant structure with extremely high losses is revisited herein. This work is motivated by the need of efficient electromagnetic power extraction from antenna-sources implanted into the human body. As the dielectric constant of biological tissues varies between 35 and 80 with a conductivity increasing from 0.5 to 2 S/m with frequency, the involved propagation and particularly radiation phenomena cannot be described by the current state of the art published research. Since the scope of the biomedical applications refers to the communication or energy transfer between an implanted device and an external one, the problem to be addressed involves primarily the near field and secondary the far-radiated field. Many of human body parts as the hands, legs, torso and neck can be modeled as cylinders. Indicatively, a non-magnetic infinite cylinder with an average dielectric constant εr1 = 58.1 and conductivity σ = 1.69 S/m is considered, with focus on the hand with average radius 2.75 cm. Although a plethora of excellent publications elaborates both analytically and numerically on the radiation from dielectric cylinders including losses, there is not any work studying rods with so high dielectric constants and extremely high losses, (loss tangents around unity or higher), while most of them are dealing with the far field rather than the near field. Classical works reveal radiation due to the discrete surface and leaky modes as well as a continuous spectrum, while complex modes appearing as quadruplets are found responsible for only energy storage. These are indications of discrete modes transitions as dielectric losses are increased. It is herein proved that indeed increasing losses are causing not only mode transition but also a change in their nature as surface or leaky, while the complex mode quadruplet breaks resulting in radiation in both the near and far fields, while losses have significant effects in the continuous spectrum (sky or space wave). These phenomena are exploited to serve the main purpose of this paper aiming to devise a physical mechanism supporting efficient energy and signal transferring inwards or outwards a highly lossy, high dielectric constant cylinder. The novelty of the proposed methodology stems from a Wiener-Hopf based non-meromorphic Kernel factorization resulting in a field product representation. This is composed of well defined individual terms with each one of them building on a specific pole-mode. The proposed formulation is found to be equivalent to the generalized ``multiplicative'' and ``additive'' steepest descent methods regarding the far field evaluation, but additionally is capable of providing the near field as well. The latter feature supports important biomedical applications. Due to the huge extent of the subject and in order to facilitate the continuous spectrum the analysis is restricted to the excitation by an infinitesimal electric dipole positioned at the origin and oriented along the axis of the cylinder. Studying this structure, a low attenuation low order mode is encountered which is mainly responsible for the energy transferring. This is in accordance with Frezza et al. findings for a ``deeply penetrating'' mode into highly lossy media.

The time-harmonic scattering problem from an isotropic multilayer coated 3-D object is considered. The coating is modeled by an impedance boundary condition (IBC) prescribed on the outer surface of the coating. The standard Leontovich IBC is local and constitutes a poor approximation for low index materials. A possible remedy is to employ high order IBCs (HOIBCs) involving tangential differential operators multiplied by coefficients. A generic HOIBC formulation (termed here IBC3) with five coefficients is considered here. Sufficient uniqueness conditions (SUCs) are derived for the corresponding Maxwell's problem (i.e. Maxwell's equations in free-space, radiation condition at infinity and IBC3 on the surface). The IBC3 coefficients are obtained by minimizing, with the SUCs as constraints, the error between either the exact and IBC3 impedances (local planar approximation) or the exact and IBC3 Mie series coefficients (local spherical approximation). Finally, the IBC3 is numerically implemented in a well-posed EFIE+MFIE formulation. Numerical results obtained on 3D objects demonstrate the high accuracy achieved with the constrained IBC3.

Utilizing spread spectrum time domain reflectometry (SSTDR) to detect, locate, and characterize faults in photovoltaic (PV) systems is examined in this paper. We present a method to obtain the model parameters that are needed to produce digital twin SSTDR responses for PV systems. The digital twin SSTDR responses could be used to predict faults within the PV systems. The model parameters are the reflection and transmission coefficients at each impedance discontinuity in the PV system along with the propagation coefficients across each PV cable segment. We obtain model parameter by applying inverse modeling techniques to experimental SSTDR data associated with PV systems. Our model parameters can be used in any digital twin simulation method for modeling reflectometry in frequency-dependent and complex loads. For validation, we used the model parameters in a graph network simulation engine and adapted it to be used for SSTDR digital twin simulations in PV systems. We produced simulations for 0 to 10 PV modules connected in series. We also simulated SSTDR responses for open circuit disconnections in a PV setup containing 10 PV modules in series. Results show that all but one simulated disconnect locations match experimental disconnection locations of the same setup with an error of less than 5%.

This review discusses the evolution of the various radar cross-section (RCS) reduction techniques, with an emphasis on metasurfaces. The paper first introduces the terms RCS and RCS reduction and then discusses conventional and modern techniques to reduce RCS. The two main strategies used are scattering and absorption. The traditional methods of shaping and Radar Absorbing Material (RAM) are first briefly reviewed, followed by an extensive review of metasurface-based RCS reduction. RCS-reducing metasurfaces have the unique characteristics of acting as scatterers and absorbers. They are also described with regard to their passive and active configurations. The RCS reduction techniques are discussed with respect to profile, bandwidth, angular stability, polarization sensitivity, design complexity, and cost-effectiveness. A comprehensive comparison chart based on the performance parameters such as bandwidth, size and angular stability is tabulated for the different types of metasurfaces. The review also details areas that require further investigation.

This article aims to study the behavior of Constant False Alarm Rate (CFAR) detectors for a heterogeneous Weibull clutter and its derivatives. CFAR architectures based on exploitation of the Combined Environmental Knowledge Base (CEKB) have been proposed, called Knowledge Based Systems-Maximum Likelihood-CFAR (KBS-ML-CFAR) and KBS-Log-t-CFAR for nonhomogeneous Weibull clutter at general parameters. A CFAR architecture that uses Geographic Information System (GIS) as a Knowledge Base (KB), called KBS-Forward Automatic Order Selection Ordered Statistics-CFAR (KBS-FAOSOS-CFAR) has been proposed for special Weibull parameters. The performances of the proposed detectors have been studied and analyzed by conducting MATLAB simulations. The simulation results show that the KBS-CFAR based on CEKB outperforms the ML and Log-t-CFAR in terms of clutter edge detection capability in nonhomogeneous Weibull clutter case. Compared with other KB, this KBS-CFAR based on CEKB performs well to preserve the probability of false alarm (Pfa) at a desired constant value. For special Weibull parameters, the proposed KBS-FAOSOS-CFAR based on GIS performs better than KBS-Dynamic-CFAR and KBS-Adaptive Linear Combined-CFAR (KBS-ALC-CFAR) in severe interference case. CFAR techniques have been implemented on the ADSP (Advanced Digital Signal Processor) processing board, and the results have been evaluated and discussed.

In a previous study [1] it was shown that the generalized soft-and-hard/DB (GSHDB) boundary has the unique property that the two eigen plane waves are reflected as from the PEC or PMC boundary, i.e., with reflection coefficients -1 or +1, for any angle of incidence. The present paper discusses a more general class of boundaries by requiring that the reflection coefficients R+ and R-, corresponding to the two eigen plane waves, have opposite values, R±=±R with R independent of the angle of incidence. It turns out that there are two possibilities, R=1 for the class of GSHDB boundaries, and R=j, defining an extension of the class of perfect electromagnetic conductor (PEMC) boundaries. Matched waves at, and plane-waves reflected from, boundaries of the latter class are studied in the paper.

The goal of the present paper is on retrieving the electrical and geometrical parameters of a stratified medium with two rough interfaces. The inversion problem is formulated as a cost function optimization problem, and it is solved using the simulated annealing algorithm. The cost function consists in the integrated squared deviation between the co-polarized incoherent intensities obtained from the Small Slope Approximation and those obtained from the Small Perturbation Method. The inversion scheme is applied to the electrical and geometrical parameters involved into the analytical expressions of the incoherent intensities given by the SPM. We study the influence of the shape of the autocorrelation function and the isotropy factor upon the estimation of parameters. We test the sensitivity of the inversion scheme to noisy synthetic data. The study is applied to snow-covered soils in L-band. For the configurations under study, we show that the inverse method is efficient for eight-parameter or ten-parameter predicting problems.

A Negative Group Delay (NGD) filter prototype design based on cascaded identical 2nd-order baseband stages is presented. The prototype design achieves an NGD-bandwidth product that in the upper asymptotic limit for a distributed design is a function of out-of-band gain in decibels raised to the power 3/4. This is an improvement of previous cascaded first-order designs that have an NGD-bandwidth functional dependency of out-of-band gain in decibels to the power of 1/2. The bandwidth is taken as the 3 dB amplitude response bandwidth. The corresponding NGD design upshifted to a non-zero center frequency, i.e. a Band-Stop Filter (BSF) design, is shown to be possible to implement with Sallen-Key topology, and an example is presented for a 500 MHz center frequency and a 100 MHz (20%) 3 dB bandwidth. The filter shows a 4.05 ns negative group delay with a 1.28 ns in-band variation and a 3-dB amplitude response over the bandwidth of 100 MHz, achieving an NGD-bandwidth product of 0.405. An in-band distortion metric is presented, which can be evaluated for any specified time-domain input waveform. It is shown that the bandwidth, order of filter and desired distortion for a particular input waveform are interrelated. Therefore, the proposed in-band distortion metric constitutes another trade-off quantity to be checked for any type of NGD design.