This paper presents an efficient method to redesign a horn-fed, double-curvature reflector antenna. It helps reconstruct or repair the reflector according to a correct reference or analyze its radiation characteristics through full-wave electromagnetic simulations. The proposed method mainly consists of five stages. At first, it is necessary to obtain initial data in the form of three-dimensional coordinates of a sufficient number of points sampled from the reflector's different surface areas, especially from its central section curve and its peripheral contour. Then, the best-fitting surface to the sampled points is found using geometrical-optics (GO)-based formulations in an invasive weed optimization (IWO) algorithm. The GO relations extend the reflector laterally using elevation angle, horizontal, or focal point strips. As these are intrinsic formulations for designing doubly-curved reflectors, the fitted surface can resolve the possible defects in the reference reflector's geometryor inaccuracies in the sampled information partly. For this purpose, the reflector's central section curve is estimated by fitting a fifth-degree polynomial curve to the data sampled from it. Also, two kinds of errors, which are based on Euclidean distances, define the optimization algorithm cost function for more reliable surface fitting. In the third stage, the fitted surface's peripheral contour is adjusted to match the outline of the reference reflector using the points sampled from this section. In stage four, the redesigned reflector in the form of a point cloud is converted to a .stl file format for further simulation in a full-wave electromagnetic software. Finally, the similarity between the redesigned and reference reflectors' radiation patterns is examined using a radiation-based cost function in an iterative process, and the previously devised four stages repeat until appropriate results are obtained. In particular, an already designed and fabricated UHF band, doubly-curved reflector antenna, capable of generating a cosecant-squared radiation pattern in the elevation plane and narrow in the azimuth, is redesigned using 99 points sampled from it. It is found that horizontal strips can best fit the reflector with the small normalized error about 3 mm at the end of the IWO algorithm, indicating a nearly perfect geometrical similarity between the redesigned and reference reflectors. For further verification of the suggested method, the redesigned reflector's radiation pattern is simulated in CST simulation software, and the results are compared with the measured radiation pattern of the fabricated reflector and the simulated radiation pattern of the antenna's initial CAD model in the azimuth and elevation planes. Specifically for the redesigned antenna, the amounts of HPBW and sidelobe level in the azimuth plane are about 2.6° and 29.85 dB, respectively. Also, the amounts of gain, HPBW, and predefined parameters of α and β in the elevation plane are 28.25 dB, 13.5°, 5.07 dB, and 11.7°, respectively. All of the measured and simulated results are in good correspondence with each other, suggesting that the proposed method is a secure solution for redesigning double-curvature reflector antennas precisely and efficiently. 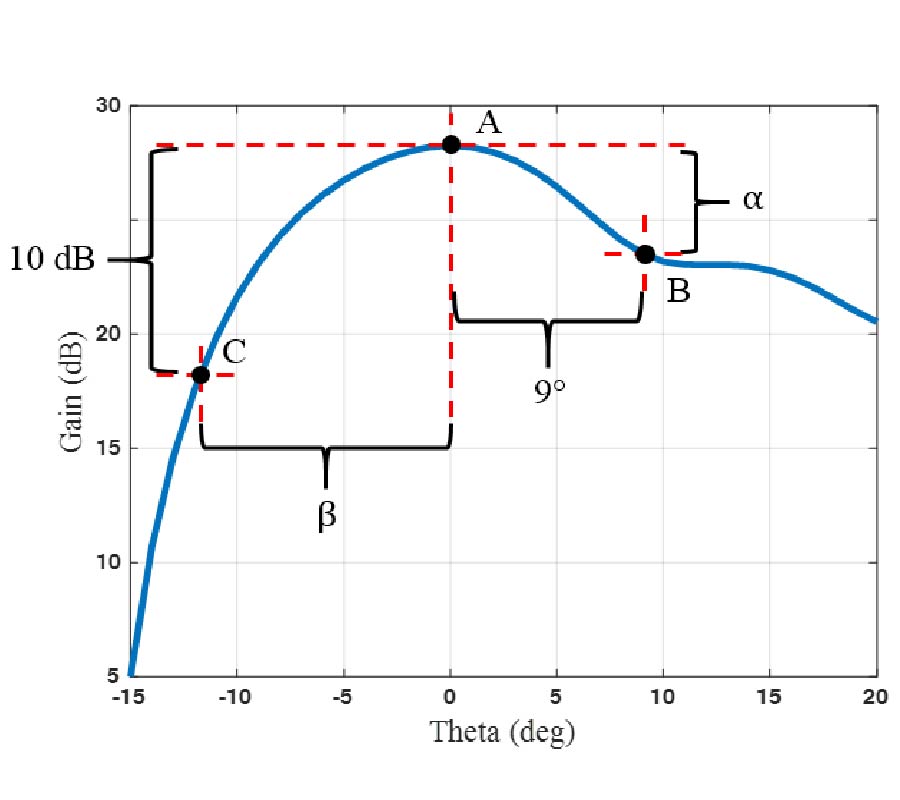