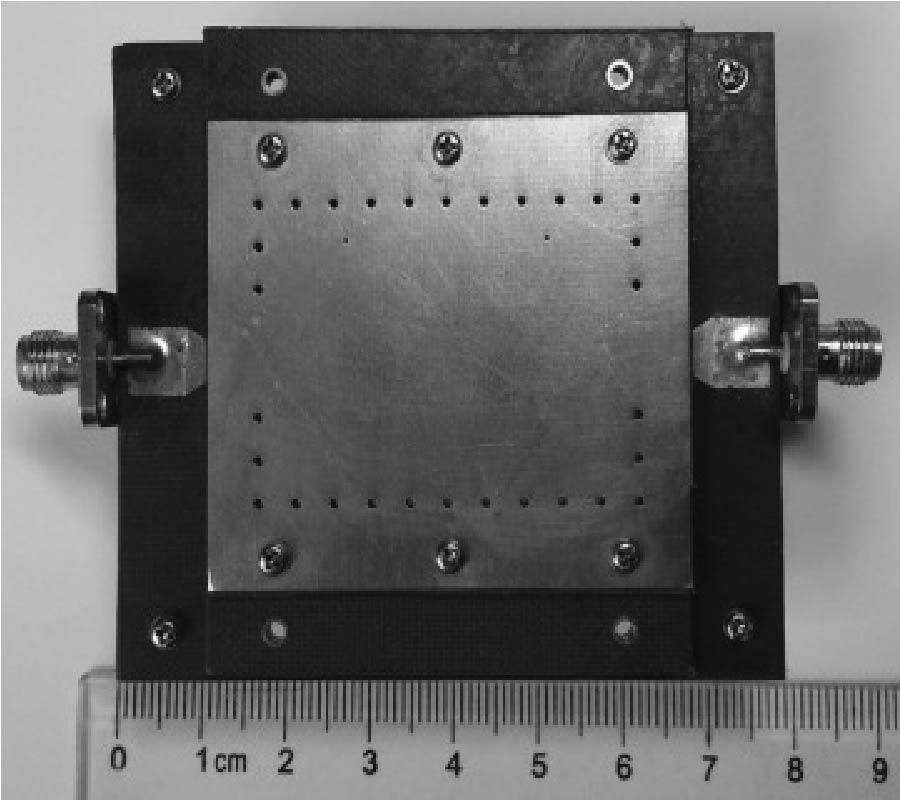 Parasitic effects in a lumped-element multilayer LC resonator are analyzed with an equivalent circuit. An optimization technique is proposed. With this technique, undesired influences of parasitic effects may be reduced. Meanwhile, some of the parasitic effects may be used for the size-reduction and performance improvement. A lumped-element multilayer LC resonator is used for demonstration. The optimized resonator outperforms the resonator before optimization in both performance and size. A multilayer filter composed of four LC resonators is used for verification. The measurement results agree very well with circuit results. The measured parasitic resonances are higher than the third harmonic frequency. These facts show the effectiveness of the proposed technique. 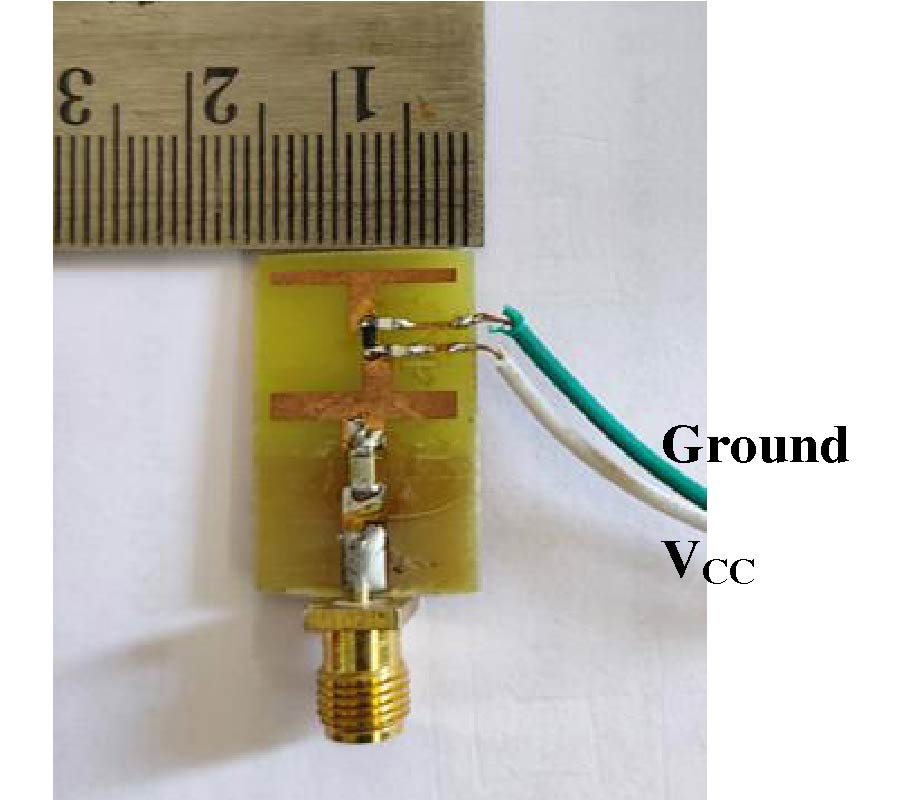 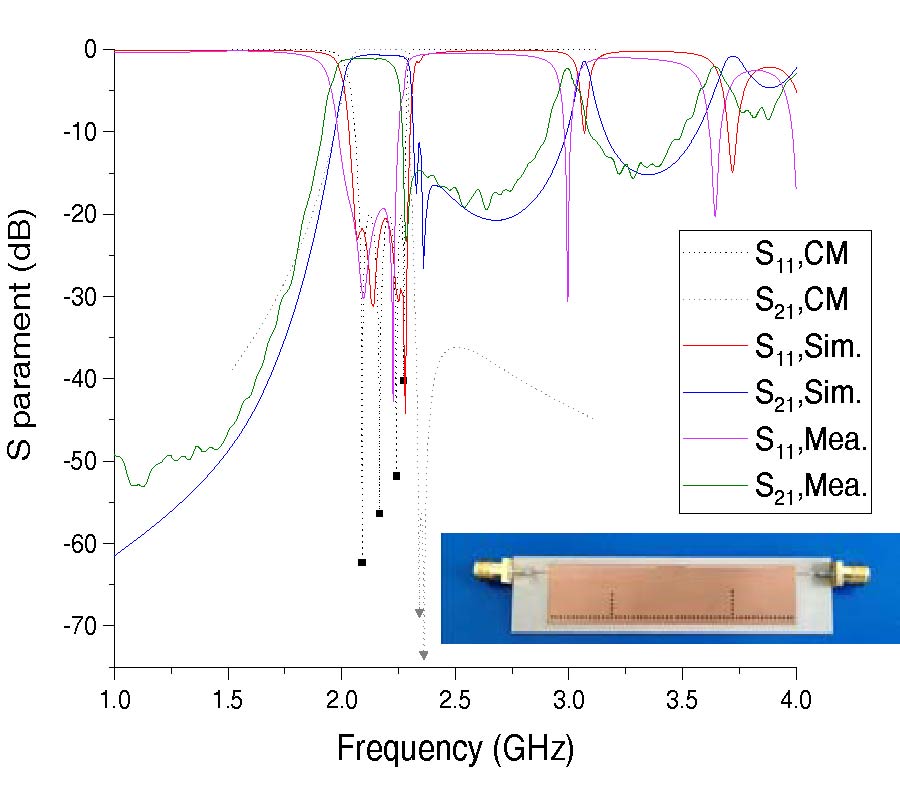 An inline quarter-mode substrate integrated waveguide (QMSIW) filter with controllable finite transmission zeros (FTZs) is presented based on a novel frequency-dependent coupling structure, which is constructed by a microstrip line with a pair of symmetric metallized via/buried holes and a magnetic coupling iris between two resonant cavities. FTZ can be independently introduced and controlled on both sides of passband to achieve high selectivity while keeping the filter compact configuration unchanged. For demonstration, the proposed structure is analyzed in detail. An inline fourth-order QMSIW bandpass filter (BPF) with two upper FTZs is designed, fabricated, and measured. The synthesis results, EM results, and measured results are in accordance with each other, which confirms the effectiveness of the proposed method. 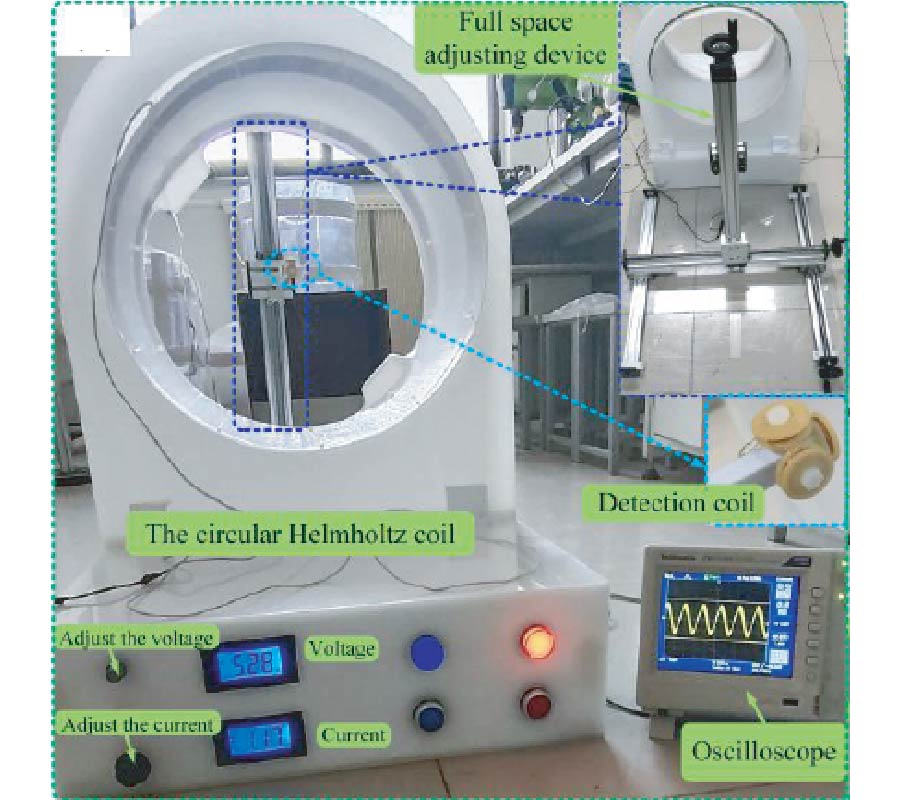 Wireless power transmission system (WPTS) based on near-field inductive coupling is an effective way to provide power for gastrointestinal micro-robot. WPTS is normally realized by a Helmholtz coil outside the body and a three-dimensional receiving coil in the micro-robot. Helmholtz coil has two types, circle and square. However, a quantitative comparison for them in the application of WPTS has not been available yet. In this paper, the calculating models of the electromagnetic field intensity (EMFI) for the circular Helmholtz coil (CHC) and square Helmholtz coil (SHC) are built. With the built model, the uniformities of the electromagnetic field (UEMF) of two Helmholtz coils are calculated. The actual coil system is built to verify the correctness of the built models. When the diameter of the CHC and the side length of the SHC are both 40 cm, the available areas (UEMF ≥ 90%) for powering the robot supplied by the CHC and SHC are 39% and 56%, respectively. Also, the consumed powers of the two coils, when identical EMFI is excited, are compared. When the EMFI at the center of the CHC and SHC are both 1 Gs, the consumed powers are 5.09 W and 4.62 W, respectively. The above results show that compared to the CHC, the SHCnot only has better uniformity, but also consumes less power. Thus, it is more suitable for the WPTS. 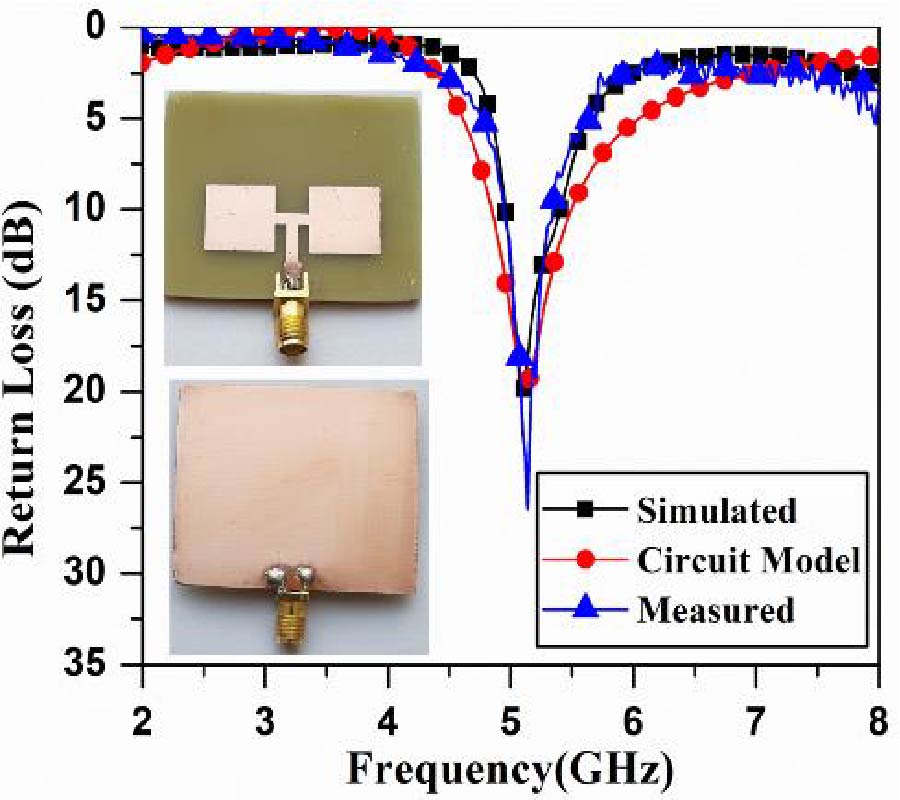 This paper proposes a dual-polarized and high gain, four-element based compact multiple-input-multiple-output (MIMO) antenna operating at 5.2 GHz. First, a hammer-shaped antenna has been designed with a gain of 5.3 dBi, impedance bandwidth of 400 MHz, and broadside radiation. A mathematical analysis for radiated electric field and an equivalent circuit model for the hammer-shaped antenna are developed. Using the hammer-shaped antenna as an element, four element MIMO design with shorting walls is proposed. The shorting walls near non-radiating edges improve isolation between the elements by changing the direction of the major lobe. The proposed design has an envelope correlation coefficient (ECC) < 0.15, measured gain of 5.5 dBi, and mean effective gain (MEG) ~ -3 dB. This design has a low profile and single layer planar structure of area 65 mm x 65 mm, which makes it a good contender for portable devices or low-profile hand-held applications in WLAN band.

A frequency reconfigurable antenna with dual-band operation is presented. The antenna has a circular radiating patch loaded with an annular slot, and the slotted patch is shorted to the ground plane with four conducting posts. The antenna has three feed ports. Two of the ports are used to excite the slot mode resonant at a lower frequency, and broadside radiation with dual orthogonal linear polarizations can be obtained. The other port is used to excite the monopolar-patch mode resonant at a higher frequency, and conical radiation with vertical polarization can be yielded. To reconfigure the operation frequencies, four varactors are symmetrically placed across the annular slot. The simulated results indicate that the resonant frequency of the slot mode can be tuned from 1.62 to 1.17 GHz when the capacitance of the varactors is varied from 0.6 to 1.8 pF; besides, for each capacitance value, the impedance bandwidth of the antenna operating in the monopolar-patch mode can cover the frequencies from 2.4 to 2.5 GHz. Experiments are also carried out to validate the simulated data. 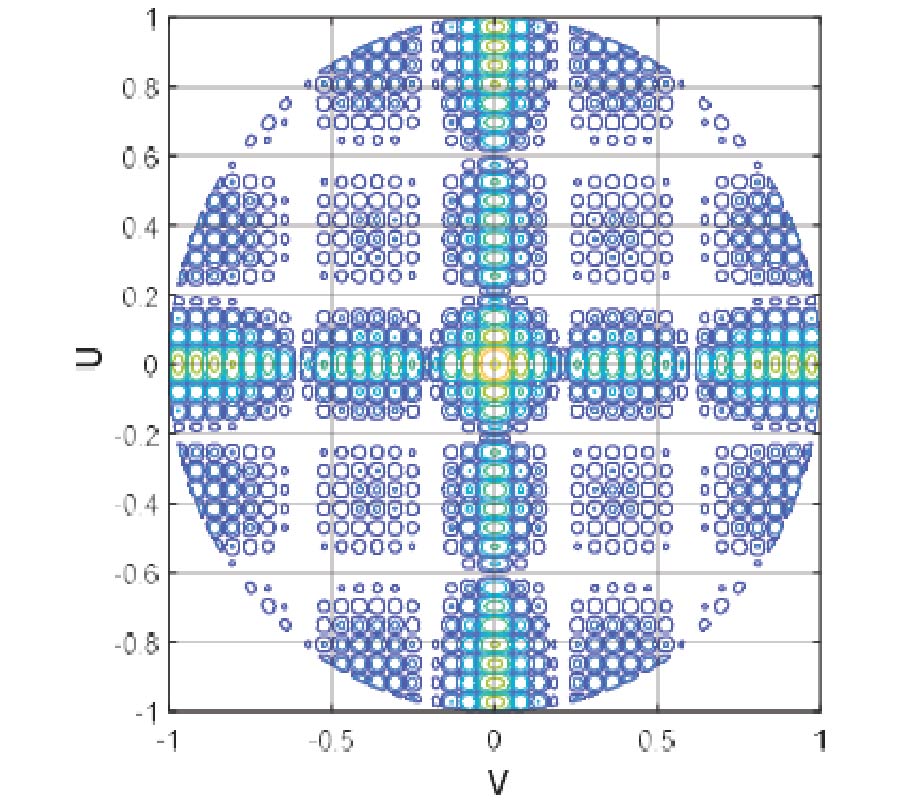 A Method for Thinning Useless Elements in the Planar Antenna Arrays

In this paper, the thinning space is constrained to only outer sub-planar array elements instead of fully filled planar array. Since the amplitude weights of the outer elements have small amplitude excitations, they can be optimized to find the least useful elements and remove them without affecting the desired radiation characteristics. The binary genetic algorithm is used to perform such thinning optimization. Simulation results show that roughly the same performance can be achieved when the number of removed elements in the outer sub-array relative to the total number of the planar array elements does not exceed 19%. In addition, to keep the size of the thinned array equal to that of the original filled array, the perimeter elements were excluded from the thinning process. Also, some constraints on the thinned array pattern are imposed to control the null directions toward interfering signals. 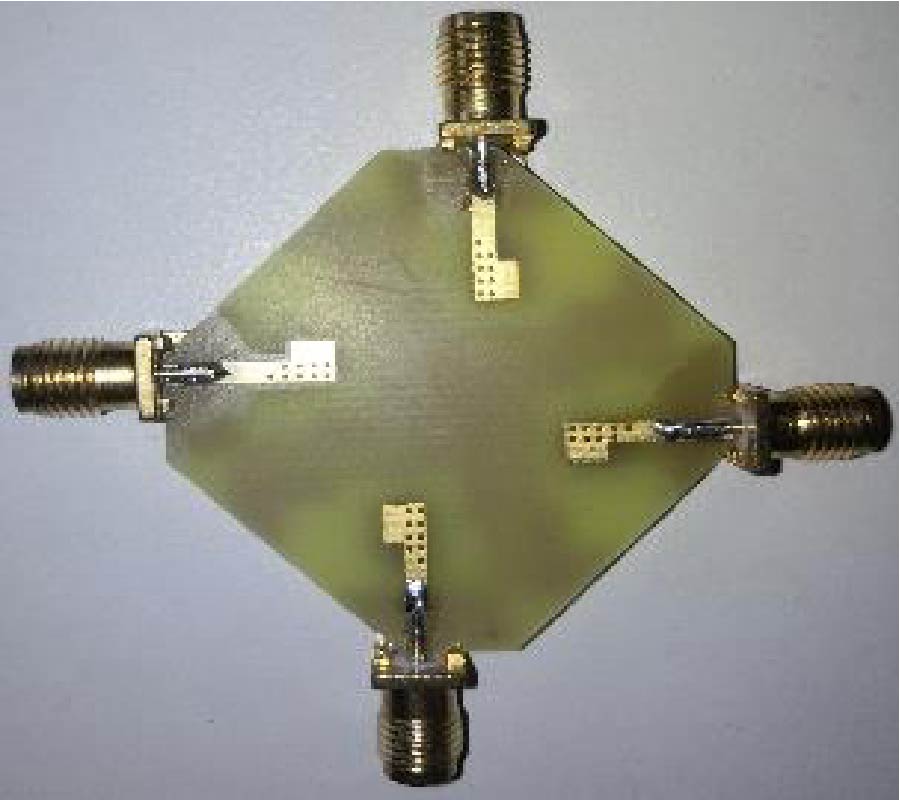 A miniaturized four-port multiple-input multiple-output (MIMO) antenna for ultra-wideband (UWB) applications is presented. The proposed UWB MIMO antenna has a compact size of 34 × 34 mm2. Four antenna elements are placed orthogonally, and the element is connected to the feed line through metal vias in the substrate. These metal vias increase the bandwidth of the high frequency part of the antenna. A T-shaped slit, a rectangular slit, and a triangular chamfer are etched on the ground between two adjacent antenna elements. The working bandwidth of the antenna is 2.5-11.6 GHz, covering the entire UWB application band. The isolation between antenna elements is more than 18 dB within the operating bandwidth. Details of the design methodology and results are presented and discussed. Envelope correlation coefficient is computed, and it is within the acceptable limit, which validates the design concept for building a compact MIMO antenna system with good performance. 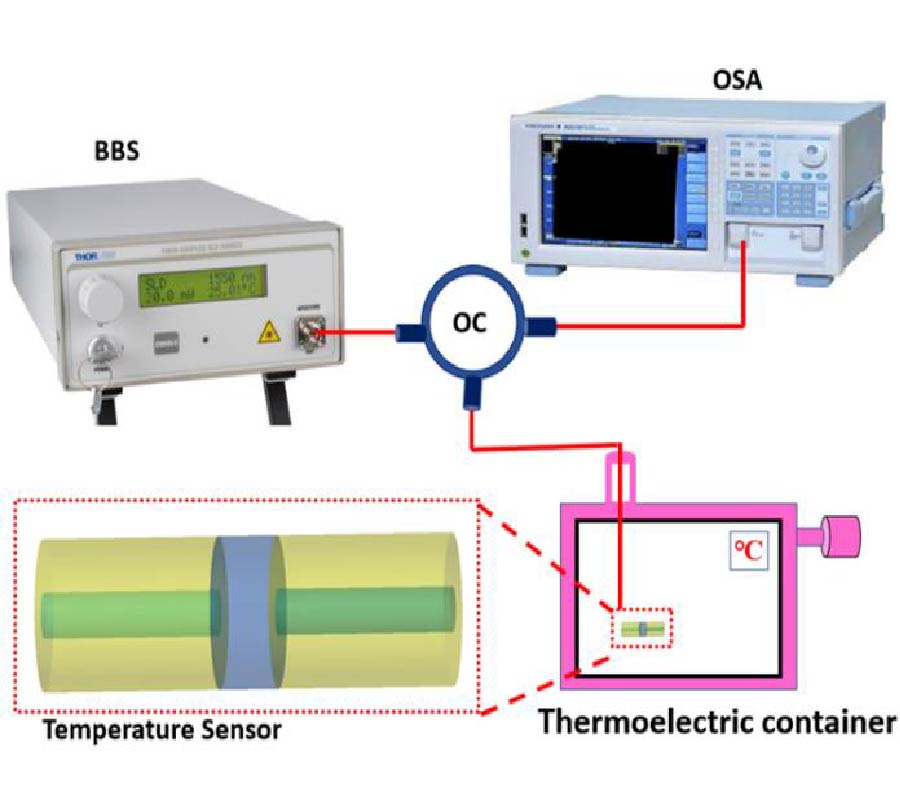 A highly sensitive temperature sensor based on a polymer cavity of a Fabry-Perot interferometer (FPI) is experimentally demonstrated. The interferometer gives ease in fabrication, and it can be formed by the induction of a thermos-sensitive polymer layer in between two single mode fibers (SMFs). The polymer is used as an FPI cavity for temperature sensing. Due to high thermal expansion coefficient (TEC) and thermos-optic coefficient (TOC) of polymer make the interferometer highly sensitive to ambient temperature. The maximum temperature sensitivity of 2.2209 nm/°C for the polymer FPI cavity of 40.61 µm in the ambient temperature range of 28°C to 34°C is obtained. The proposed sensor shows the advantages of high sensitivity, compactness, simple fabrication, and low cost. Thus, it may become a part of various practical applications in the field of environmental science and engineering sciences. 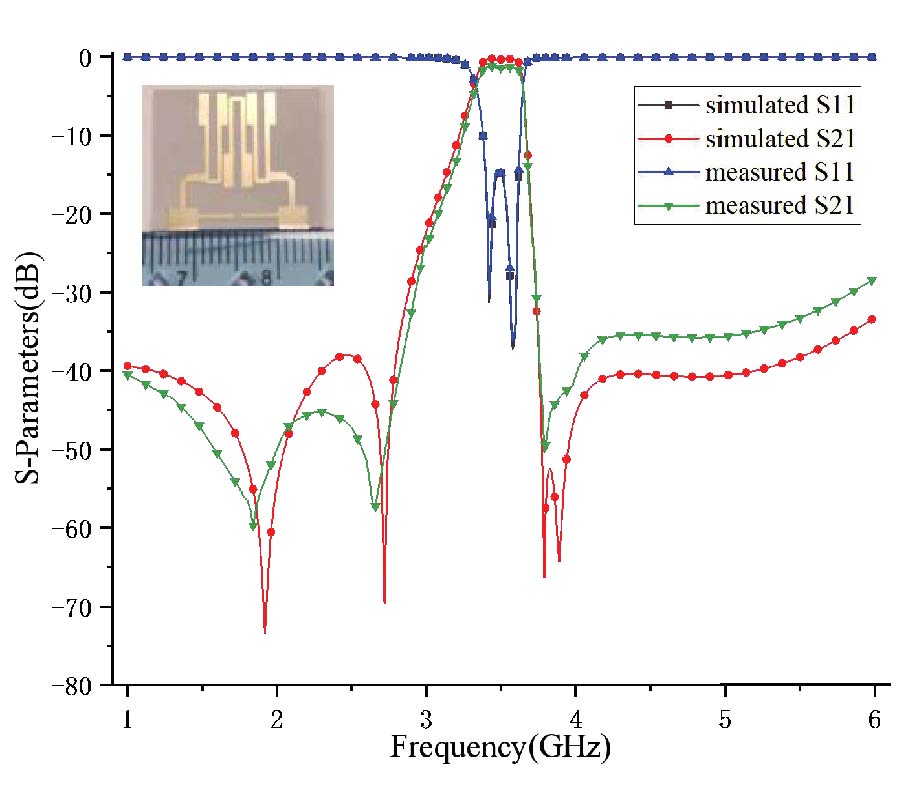 This paper proposes a novel miniaturized bandpass filter by loading a stepped-impedance resonator (SIR). Owing to the intrinsic characteristic of SIR, a third-order bandpass filter with SIR is presented, which has a size reduction of 38% compared with the conventional hairpin-line filter. On account of the electrical tape gap effect of a defected ground structure (DGS), further miniaturization is realized by introducing a pair of complementary split-ring resonator (CSRR) DGSs. Besides, frequency selectivity and out-of-band rejection can be improved by adding CSRR DGS and source-load (S-L) coupling structures, which produce two transmission zeros at two side band of passband respectively. The results show that the passband range is 3.4-3.6 GHz, and the final size is reduced by 50.3%. 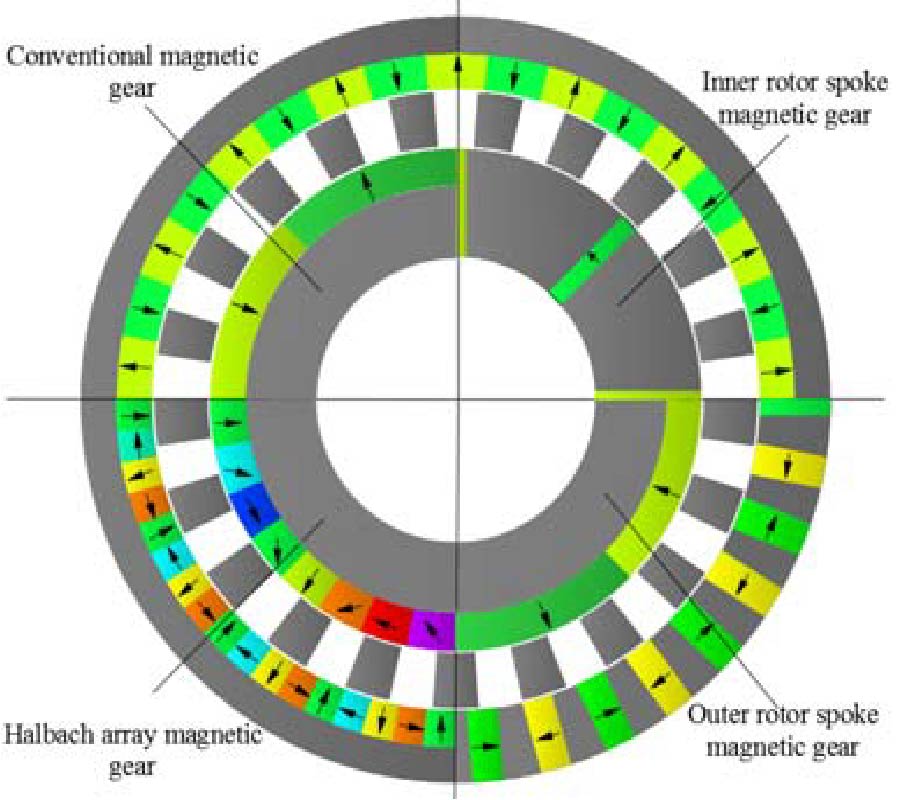 In order to investigate the influence of different magnetization modes on the electromagnetic performance of magnetic gear, four models of magnetic gear with different magnetization modes are established. The finite element method is used to simulate the four models and compare their performances. The distribution of magnetic flux lines, air gap magnetic field, harmonic distribution, static torque and dynamic torque are calculated, respectively. The simulation results show that the coaxial magnet gear with Halbach array has larger air gap flux density amplitude, smaller air gap harmonic content and higher output torque than the other three kinds of magnetic gears. 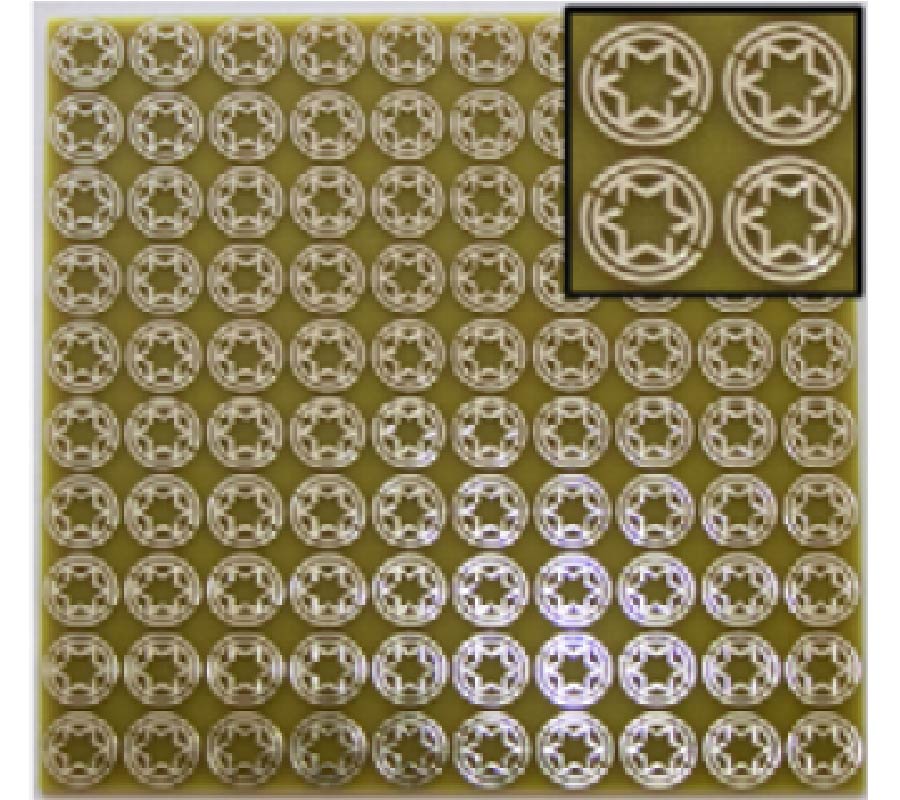 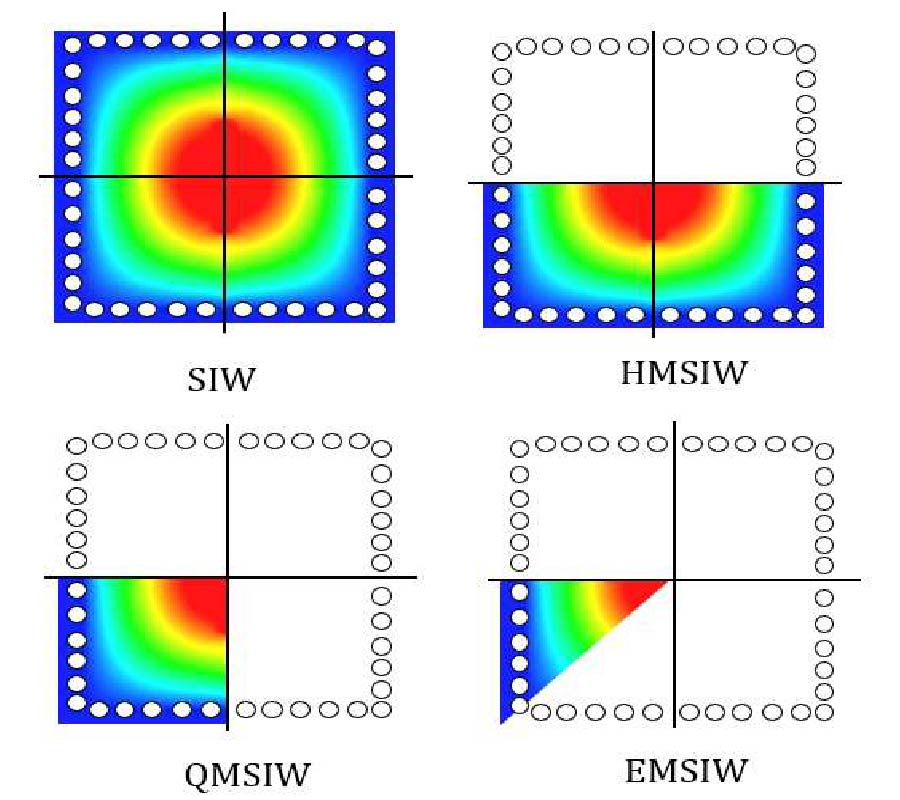 By combining the method of moments and the compressive sensing theory, a rapid scheme for analyzing the electromagnetic scattering problems over a wide incident angle has been developed, by which the calculation times of traditional method of moments can be decreased efficiently. To further reduce the calculation times, the matrix splitting technique is proposed to establish a new scheme in this paper. The basic principle is elaborated in detail, and the effectiveness of the new scheme is verified by numerical results. 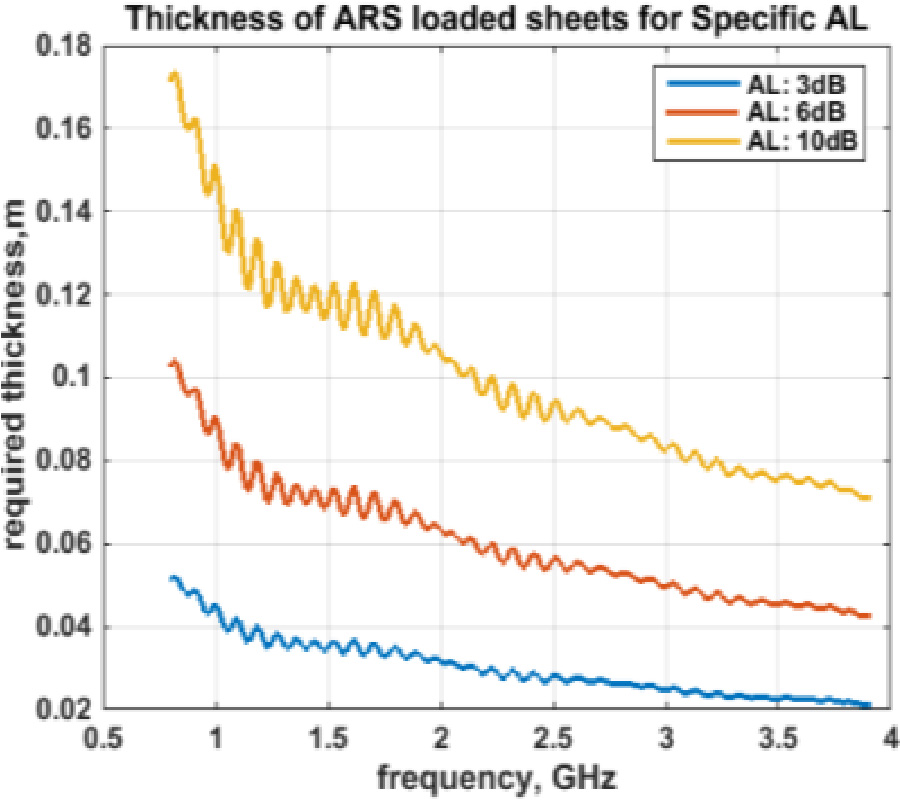 Design of a Compact Lowpass-Bandpass Diplexer with High Isolation 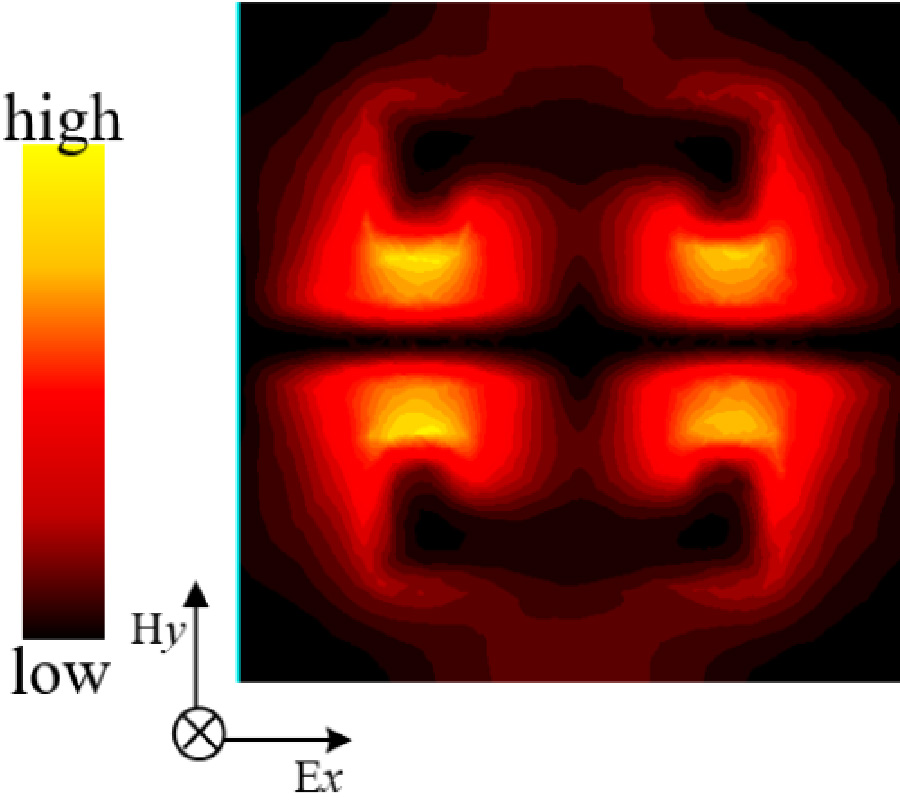 A Terahertz Demultiplexer Based on Metamaterials Applied to Terahertz Communication Systems

This paper proposes a novel terahertz demultiplexer based on metamaterials. Its surface metal structure comprises double U-shaped structures and a rectangular wire. The demultiplexer can separate terahertz of 0.225 THz and 0.410 THz, with high isolations of 41 dB and 38 dB, low insertion losses of 0.07 dB and 0.11 dB, and stable group delays of 3.5 ps and 3.8 ps at the center frequency, respectively. The equivalent parameters of metamaterials are simulated, and the electric field, current, and power distribution characteristics at operating frequency points are analyzed. This metamaterial is easy to process and is expected to be applied in future 6G wavelength division multiplexing systems. 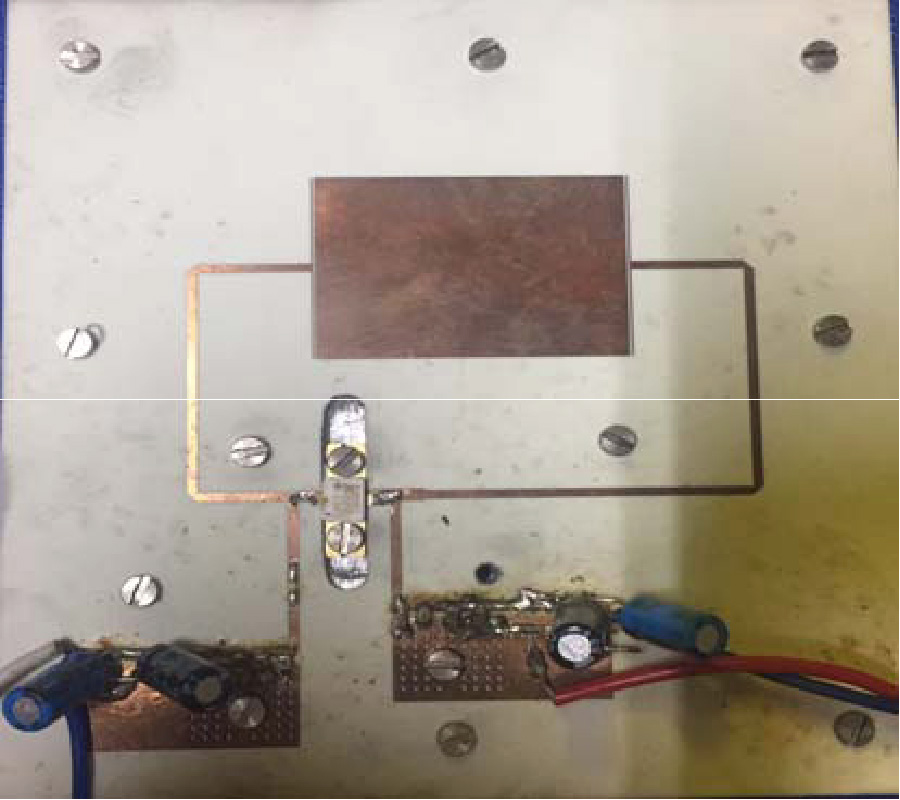