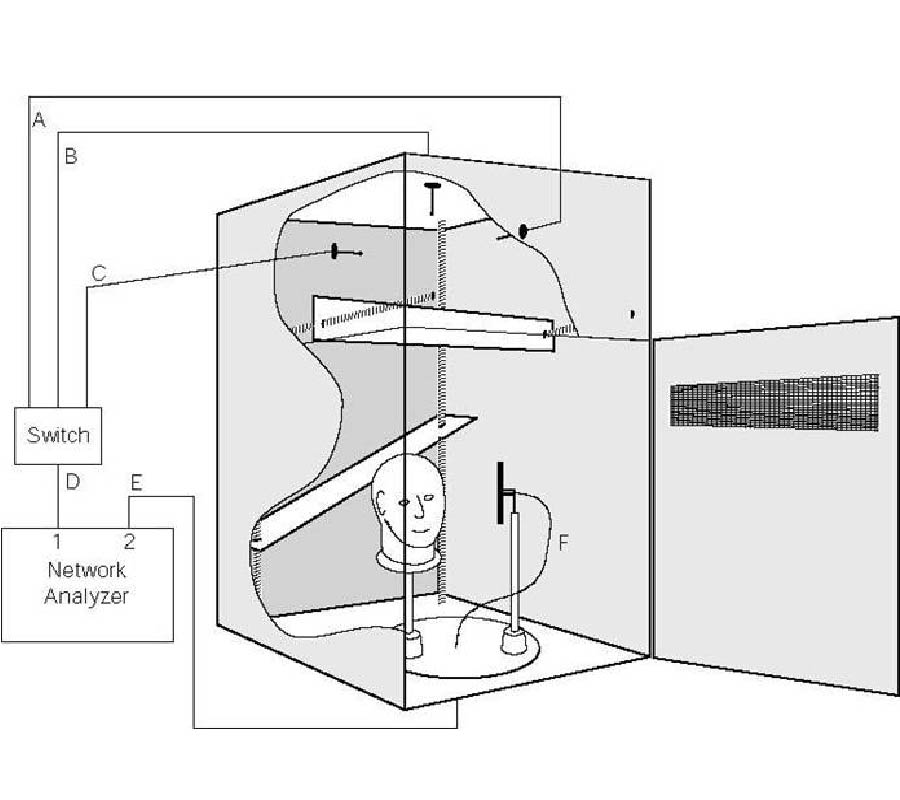 Evaluation and Measurement of the Doppler Spectrum in a Reverberation Chamber

Efficient Evaluation of the Longitudinal Coupling Impedance of a Plane Strip

We discuss the electromagnetic interaction between a travelling charge particle and a perfectly conducting strip of a negligible thickness. The particle travels at a constant velocity along a straight line parallel to the axis of symmetry of the strip. The efficiency of the proposed solution is proved by evaluating the longitudinal coupling impedance in a wide range of parameters.

The Remote Field Eddy Current (RFEC) method is widely used to inspect both ferrous and nonferrous metal tubes when internal access is the only possible way of inspection. An axisymmetric quasi-analytical model is presented in this paper in order to simulate the behavior of a RFEC system during its operation. The proposed model, based on the application of the Fourier Transform in space, is able to take into account the finite length of the excitation coil, fed by an AC current, and the relative movement between the RFEC system and the wall tube. Numerical simulations based on integral formulations and experimental measurements were used to validate the proposed quasi-analytical model.

In this paper, self inductance for a conductor with rectangular cross section is investigated. Using the threedimensional Fredholm's integral equation of the second kind with weakly singular kernel we obtain an equation for the complex voltage drop in the conductor. Self impedance appearing in the equation is expressed in the form of integral relation for any current density distribution. The imaginary part of this impedance divided by angular frequency is the self inductance of a conductor of any shape and finite length. In the case of direct current (DC), low frequency (LF) or thin strip conductor of rectangular cross section the formulae for the self inductances are given for any length and for length much greater than the other dimensions. 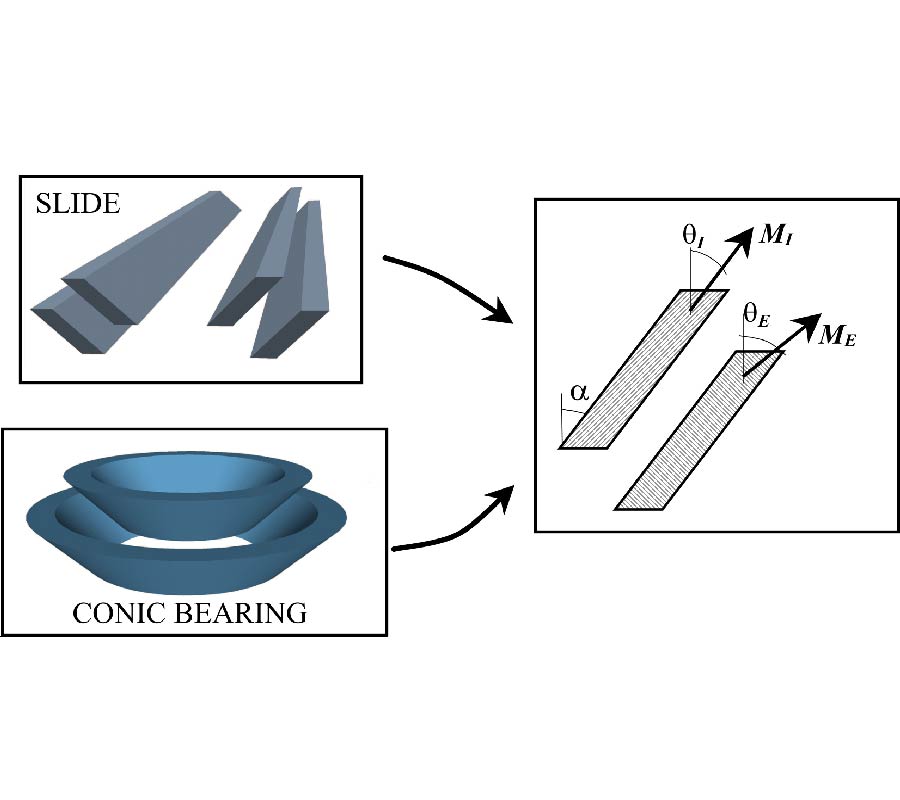 Applications of permanent magnets bearings have gained a new interest thanks to the development of rare earth materials, characterised by residual magnetic induction greater than 1 T. The present paper proposes a new geometry for permanent magnets bearings with V-shaped elements, both for a plane slide and for cylindrical bearings. The aim of this geometry is to give new possibilities to the application of these bearing systems, by reducing its inherent instability. A design method, involving Finite Elements and Magnetic Field Integral Equations analyses, is also described for defining the most suitable V-opening angle and the two magnetisation directions. These parameters can be varied in order to reduce the unstable force in the coupling, and to reach the desired force and stiffness in the stable direction. The design is founded on the evaluation of four ``geometric'' vectors, that depend on the geometry of the elements. Some results are reported for a reference geometry for both the slide and the cylindrical bearings.

This paper presents a MAGLEV system in which the magnetic suspension is assured by the repulsion of permanent magnets both on the guideway and on the vehicle. Due to the induced currents on a aluminum sheet surrounding the magnets on the guideway, the system intrinsic instability is overcome. The detailed structure of the proposed system is described and the main results of the simulations by means a FE code are reported.

A direct near-field - far-field transformation with helicoidal scanning for electrically long antennas is proposed in this paper. Such a transformation, which allows the evaluation of the antenna far field in any cut plane directly from the acquired near-field data without interpolating them, relies on the nonredundant sampling representation of electromagnetic fields and makes use of a prolate ellipsoidal modelling of the antenna under test for determining the number of helix turns, whereas the number of samples on each of them is fixed by the minimum cylinder rule, as in the classical cylindrical scan. Numerical and experimental tests assessing the effectiveness of the approach are shown.

A Trans-Impedance Green's Function for the Dielectric Ring Circulator

An efficient trans-impedance Green's function that describes the electromagnetic behavior of a ring circulator is presented. A rigorous derivation composed of an infinite summation of modified Bessel functions of the first and second kinds is included. As with more traditional circulator descriptions, the formulation herein contains a weak singularity when the measurement point is located near the impressed source point on the same radius. To accelerate convergence of the series, this singularity is extracted from the formulation and integrated analytically. To complete the formulation, two circulators are presented; the first with ports that emanate at equal angles from the outer radius, and the second with two ports associated with the outer radius and one port that connects to the inner radius. The computation time associated with the proposed analysis lasted approximately 0.25 s, whereas an identical structure simulated via a common full-wave solver lasted approximately 10 hours. Comparison of impedance data between the proposed analysis and full-wave simulation is presented.

In this paper we present a novel general methodology which ensure a minimum uncertainty in the measurement of the real part of the permittivity of a material measured using cylindrical shielded dielectric resonators. The method is based on the fact that for any given value of the dielectric permittivity there is an optimal radius of the cylindrical dielectric rod sample. When the dielectric rod sample has the optimum radius, the width of the coverage interval associated to the real part of the dielectric permittivity measurement result --- for a given confidence level --- is reduced due to a lower sensitivity of the dielectric permittivity to be measured versus the variations in the resonant frequency. The appropriated radius of a given sample under test is calculated using Monte Carlo simulations for a specific mode and a specific resonant frequency. The results show that the confidence interval could be reduced by one order of magnitude with respect to its maximum width predicted by the uncertainty estimation performed using the Monte Carlo method (MCM) as established by the supplement 1 of the Guide to the Expression of Uncertainty in Measurement (GUM). The optimum radius of the sample under examination is fundamentally determined by the electromagnetic equations that describe the measurement and does not depend specifically of the sources of uncertainty considered.

In this paper, the RII depressed core triple clad based structure as Zero-dispersion Shifted optical fiber is optimized to obtain small pulse broadening factor (small dispersion and its slope) and low bending loss suitable for long haul communications. The proposed structures allow reducing the dispersion, its slope and the bending loss. The Genetic Algorithm (GA) and the Coordinate Descent (CD) technique are used for the optimization. The suggested design approach involves a special cost function which includes dispersion, its slope, and bending loss impacts. The proposed algorithm and structure have inherent potential to obtain large effective area and extend tolerance of bending loss simultaneously. Meanwhile, an analytical method is used to calculate the dispersion and its slope. In the meantime, the thermal stabilities of the designed structures are evaluated.

The ground plane of wireless handheld devices plays a significant role in the electromagnetic behavior determining bandwidth, efficiency, and radiation patterns. Therefore, it is necessary to determine the frequency region where the ground plane can be better excited, especially for low frequencies where the performance of the radiating system is critical due to size limitations with respect to the operating wavelength. A fast method based on the radar cross section (RCS) is presented for computing the frequency at which the ground plane can be excited. The proposal is applied to three typical wireless platforms: a handset phone, a smartphone, and a clamshell phone. The method is compared with characteristic mode analysis and the results demonstrate a very good agreement in the resonant frequency prediction. Complex platforms using metallic strips and slots in the ground plane are analyzed using RCS which gives physical insight into the electromagnetic performance.

Electromagnetic Characteristics of Conformal Dipole Antennas Over a PEC Sphere

Rigorous mathematical Method of Moments (MoMs) for analyzing various radiating spherical structures is presented in this paper by using Dyadic Green's Functions (DGFs) in conjunction with Mixed Potential Integral Equation (MPIE) formulation. With the aid of linear Rao-Wilton-Glisson (RWG) triangular basis functions and by converting spherical DGFs to Cartesian DGFs, a conformal dipole antenna in free space and over a Perfect Electric Conductor (PEC) sphere is analyzed. The characteristics of such antennas are computed by applying multilayer spherical DGFs and asymptotic approximation methods. Mutual couplings between elements of a conformal dipole antenna array in free space and over a conducting sphere are also investigated. Good agreement between the computational results obtained by the proposed methods and those obtained from commercial simulator packages shows accuracy and high convergence speed of the presented methods.

A scalar Frequency-Domain Finite-Difference approach to the mode computation of elliptic waveguides is presented. The use of an elliptic cylindrical grid allows us to take exactly into account the curved boundary of the structure and a single mesh has been used both for TE and TM modes. As a consequence, a high accuracy is obtained with a reduced computational burden, since the resulting matrix is highly sparse. 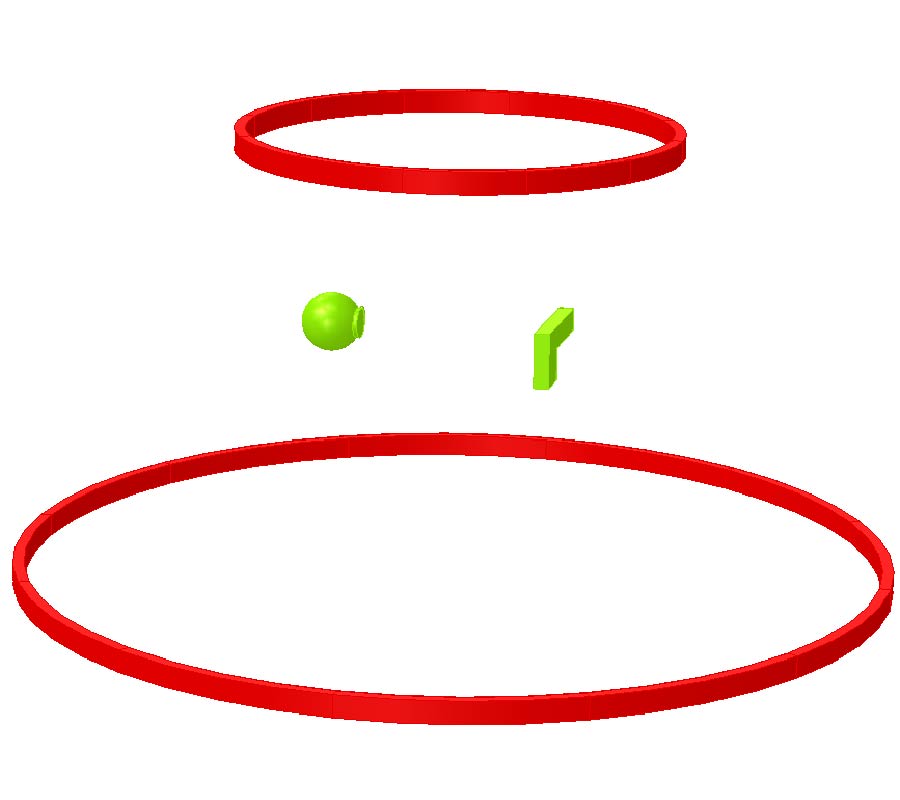 The detection and identification of conducting objects using electromagnetic pulses to excite circulating eddy currents within the object is demonstrated by numerical simulation using a finite element time domain electromagnetic solver. The ability to discriminate between objects is based on the decay rate of the induced currents in the object, typically ~ 100 μS. The decay rates are different for a wide variety of everyday objects, allowing threat objects such as handguns, grenades and knives to be discriminated from benign objects such as mobile phones handsets, watches, keys, etc. Crucially, the time constant characterising an object depends only upon the electrical properties of the object (conductivity) and the shape and size of the object; the orientation of the object is irrelevant. This aspect independence of temporal current decay rate forms the basis of a potential object detection and identification system. By application of an algorithm based on the generalized pencil of function method, the authors demonstrate the ability to effectively count and indentify multiple objects carried in close proximity providing that the objects do not have very similar time constants and that signal to noise ratio is high. 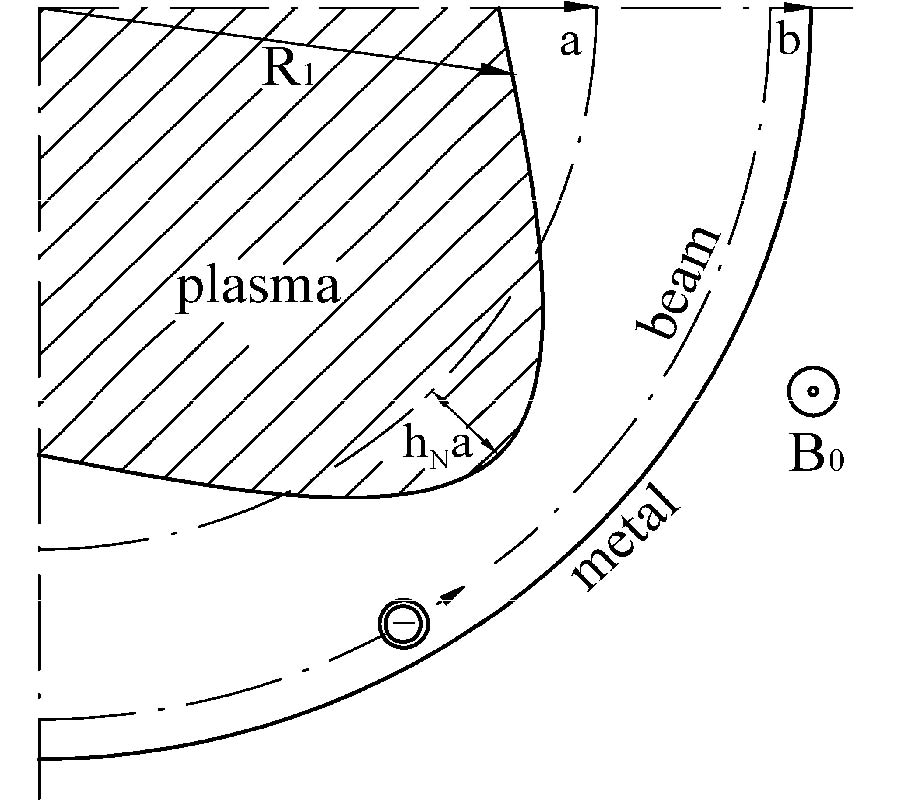 The initial stage of interaction between an annular beam of electrons, which rotate along Larmor orbits in the gap between a localized plasma column and a metal waveguide with a circular cross-section of its walls, and the electromagnetic waves of the surface type, is studied theoretically. These waves are extraordinary polarized; they propagate along the azimuthal angle across an axial external steady magnetic field in the electron cyclotron frequency range. The numerical analysis shows that changing the shape of the plasma filling cross section leads to corrections to the eigen frequency of the surface waves but does not cause a disruption of the resonance beam-wave instability development. Moreover, the conditions are found when appropriate choice of the shape can lead to increasing the instability growth rate by dozens of percent.

Propagation Characteristics of a Variant of Disc-Loaded Circular Waveguide 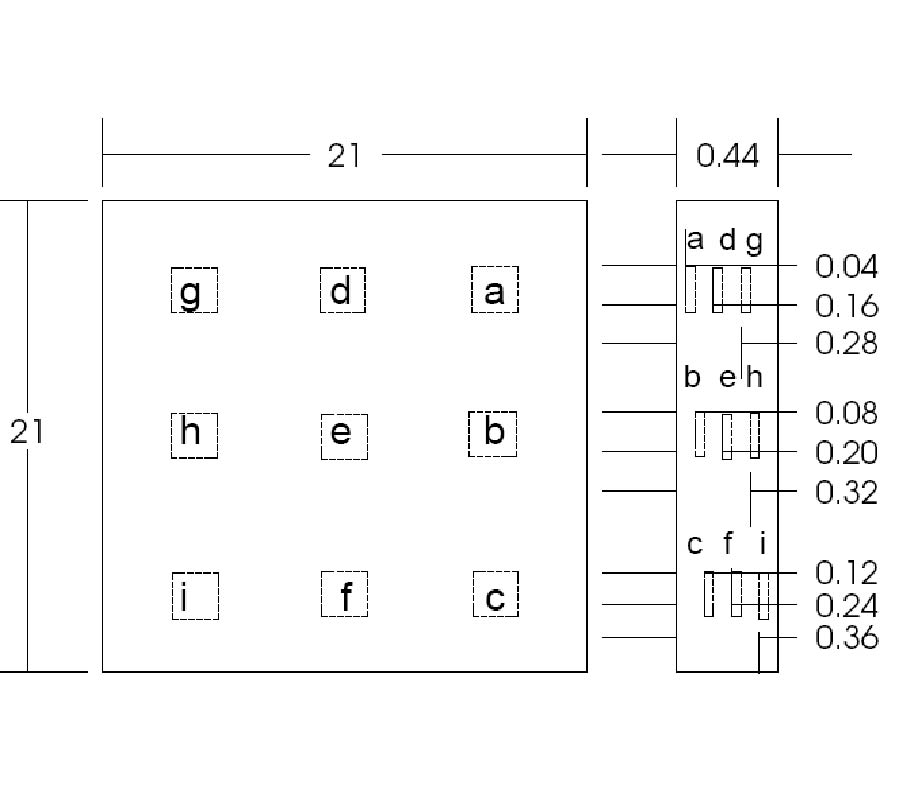 To improve the reflection performance of absorbers used in anechoic chambers, several different electromagnetic wave absorber geometries similar to conventional wedge absorber structures are proposed in this study. Design basics are examined by using the reflection and absorption of electromagnetic waves. The return loss characteristics of each absorber structure which is illuminated by a TE polarized plane wave have been obtained using well-known simulation software for several incidence angles. Comparisons of the simulation results of the conventional wedge and proposed absorbers are presented. The results show that new absorber shapes provide better absorption characteristics than a conventional wedge across almost all frequency ranges, and especially for normal and near normal incidence cases.