In this research, a fast approach of method of moments (MoM) for analyzing 3-D dielectric body is proposed. The unknown polarization current in dielectric body is expanded into rectangular blocks with overlapping volume sinusoidal basis functions. To accelerate the matrix-solving CPU time in MoM, the multi-region iterative method, where the overlapping blocks are used as the iteration units, is applied to solving the matrix equation in the MoM. Some numerical results are given to show that the CPU time for solving unknown currents can be reduced effectively by multi-region iterative method.

A novel feed network for microstrip antenna array is presented. By using the novel feeding structure, a high-performance Ku-band antenna is designed and fabricated. The 32 elements of the array are arranged in a 2-by-16 configuration. The measured peak gain at centre frequency is 22.93 dBi with an aperture efficiency of 70.5%. The antenna has less than -15 dB return loss and less than -12.3 dB SLL from 11.75 GHz-12.75 GHz. 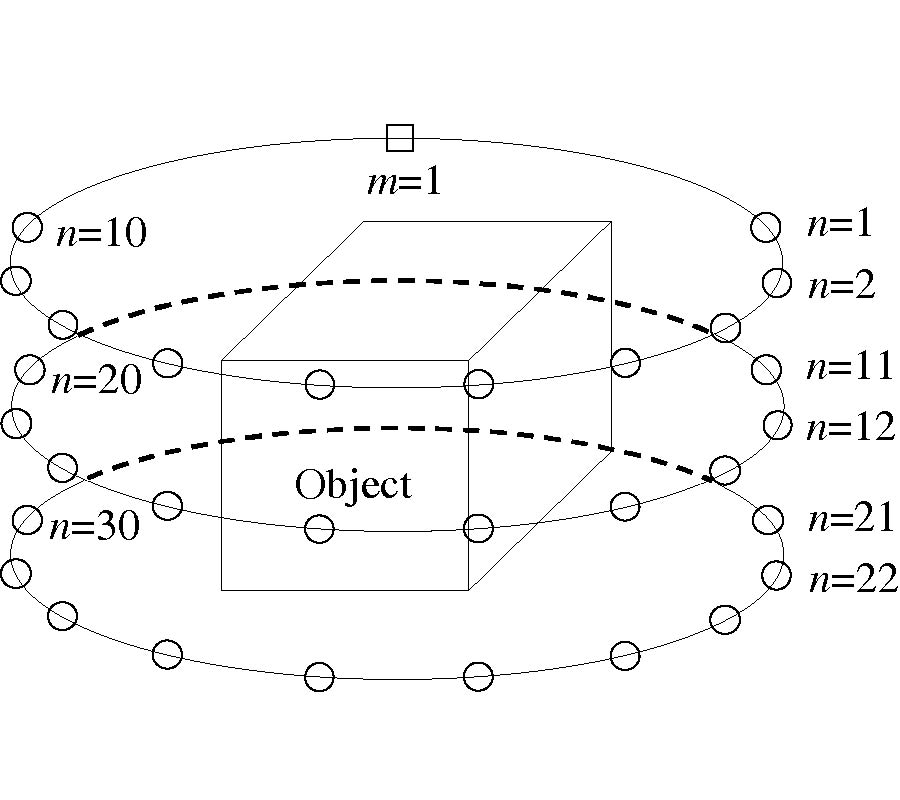 An iterative time-domain algorithm for reconstructing three-dimensional (3-D) objects is presented, using normalized microwave data. The incident waveform information is excluded from the cost functional by normalizing the observed and calculated fields in the frequency domain. The exciting pulse used in the reconstruction can be freely selected by considering the bandwidth of the received data. Two numerical examples are shown to demonstrate that the proposed method can rebuild an inhomogeneous object from noisy data where different waveforms in the observation and reconstruction are used. Two normalized data sets from synthetic observed data and calculated data for a known model are illustrated too.

It is demonstrated that there is a common theoretical basis for the Singularity Expansion Method (SEM) and stabilized, preconditioned electric field and magnetic field integral equations (EFIE, MFIE) defining radiation and scattering from a closed perfect electric conductor in a homogeneous medium. An operator relation termed the Calderon preconditioner links the MFIE and EFIE, based on the fundamental Stratton-Chu integral representations for the problem geometry. This preconditioner is known to stabilize the ill-posed first kind EFIE, yielding the Modified EFIE (MEFIE). The same preconditioner has been applied to the weakly singular MFIE kernel, giving a Modified MFIE (MMFIE), the equation then being solved using the Fredholm determinant theory. Since this analytical integral theory is the foundation of the SEM, it follows that the Calderon preconditioner enables stabilized and common SEM representations to be defined for both the MEFIE and MMFIE. For a finite-sized object admitting only pole singularities, the solution of the preconditioned EFIE and MFIE is equivalent to the frequency-domain SEM solution. The common SEM representation differs only in the coupling coefficient terms. Coupling coefficients for the MFIE are known, however, explicit formulations for the EFIE, and the modified coupling coefficients for the MEFIE and MMFIE are new contributions. 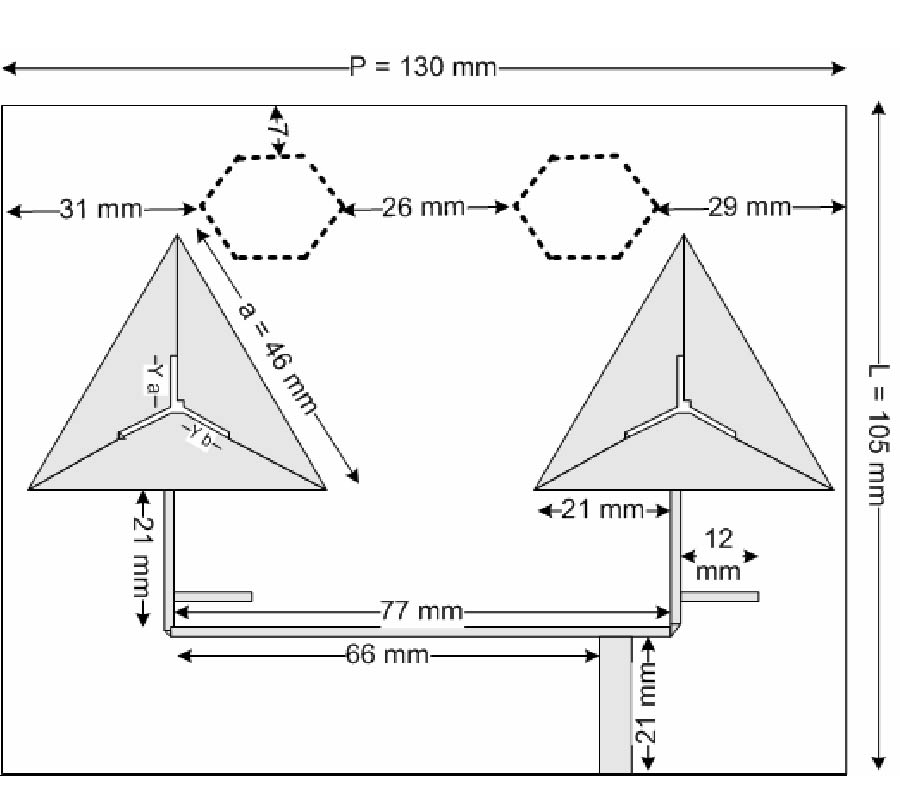 This paper presents a hexagonal shape defected ground structure (DGS) implemented on two element triangular patch microstrip antenna array. The radiation performance of the antenna is characterized by varying the geometry and dimension of the DGS and also by locating the DGS at specific position which are found experimentally. Simulation and experimental results have verified that antenna with DGS had improved the antenna without DGS. Measurement results of the hexagonal DGS have axial ratio bandwidth enhancement of 10 MHz, return loss improvement of 35%, mutual coupling reduction of 3 dB and gain enhancement of 1 dB.

A novel transition structure based on Substrate Integrated Circular Cavity (SICC) is proposed in this paper. The design approach has been developed for transition designing in other operating frequency. Good performance of flexibility and S-parameters were observed for the new transition structure. Different design tools were used to validate the design method.

Our method that uses current generator operator assumes the current on the entire surface of conducting scatterers. While, Physical Optics (PO) method assumes that the surface current generates only on the illumination region. The effect of the shadow region on the scattering waves is, therefore, proved by comparing our exact method with PO method. In this regard, radar cross-section (RCS) is calculated for smooth concave-convex contour. We work on numerical calculation of the RCS and analyze its characteristics with different target configurations including complexity and size. Concave illumination region is postulated with considering targets are taking large sizes of about five wavelengths. Here, we assume waves propagation and scattering from targets in free space and horizontal polarization (E-wave incidence).

This work is concerned with generating the digital elevation models (DEMs) from the SAR images of the region of interest using multiple sensor arrays that are fixed on the distributed satellites. We present an exact estimate of the unwrapped phase and the relationship between the unwrapped phase and the terrain height. The optimum scheme that jointly processes the signals from all sensors is based on the model of the multibaseline joint block vector. The method can simultaneously coregister the SAR images, phase unwrapping and DEM generation in the presence of the large coregistration errors. The performance of our approach is verified by a series of simulation experiments based on the distributed sensor arrays. 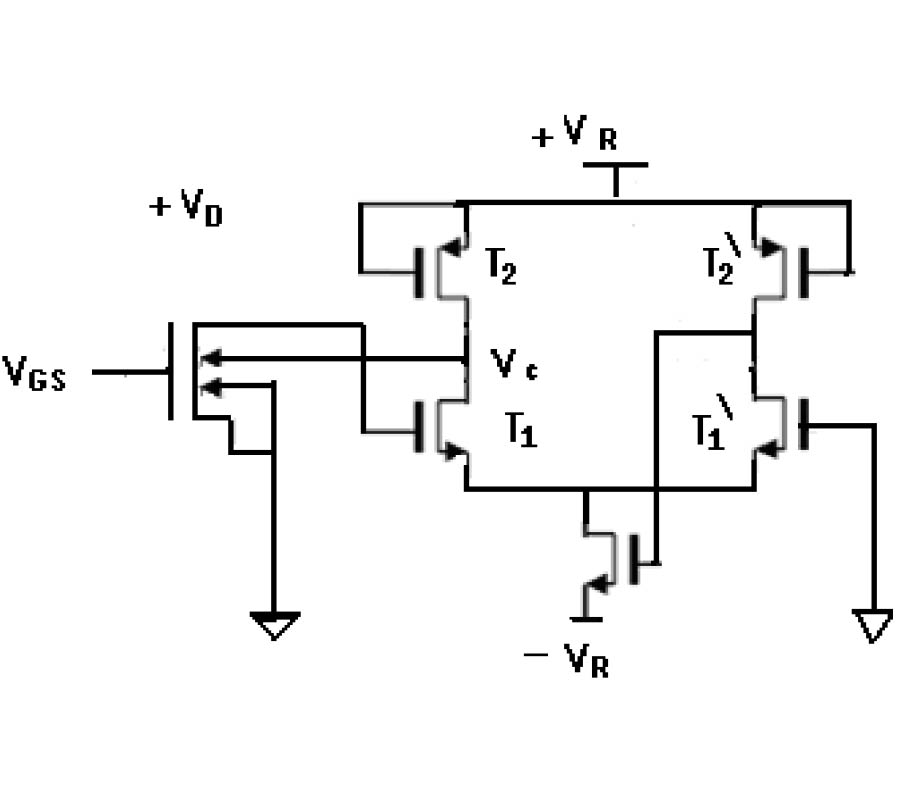 Simulation and Realization of an Active Metamaterial Cell for GSM/UMTS 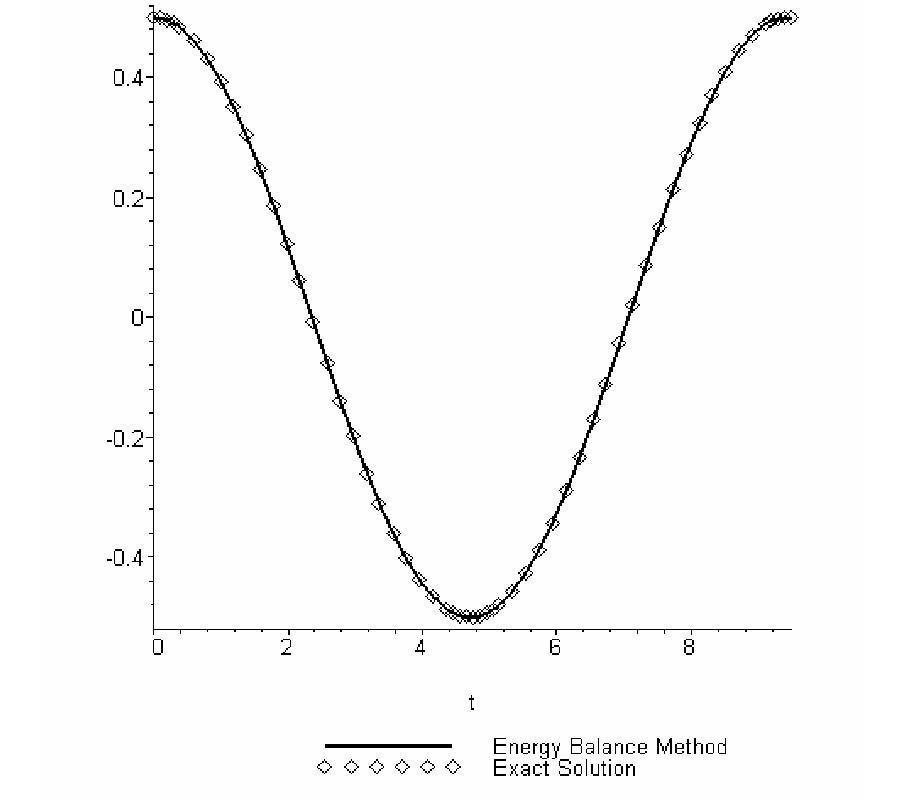 This paper applies He's Energy balance method (EBM) to study periodic solutions of strongly nonlinear systems such as nonlinear vibrations and oscillations. The method is applied to two nonlinear differential equations. Some examples are given to illustrate the effectiveness and convenience of the method. The results are compared with exact solutions which lead us showing a good accuracy. The method can be easily extended to other nonlinear systems and can therefore be found widely applicable in engineering and other science. 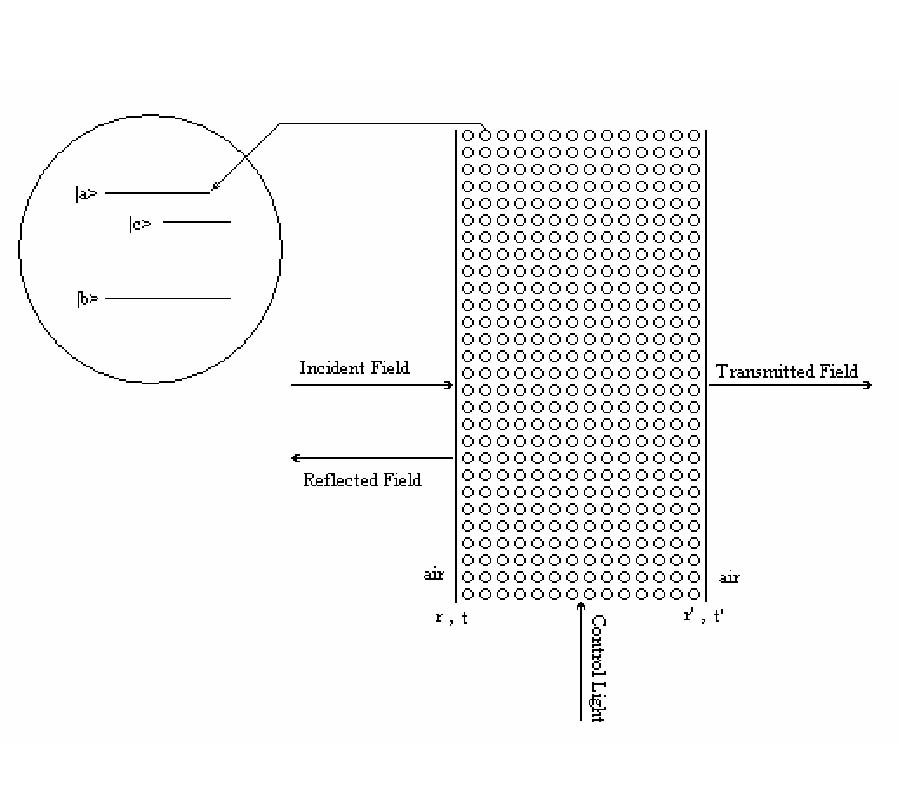 A new and efficient proposal for all-optical tunable devices and systems using electromagnetically induced transparency (EIT) is proposed. For this purpose a slab doped with quantum dots for realization of three-level atomic system is considered. Density matrix formulation for evaluation of the proposed structure is used. The reflection and transmission coefficients of the considered slab are calculated and the related amplitude and phase quantities studied versus parameters of the structure. We show that some nanometer tuning with application of the control field is obtained. So, the proposed idea can open a new realization method of all-optical tunable devices and systems towards all-optical systems. 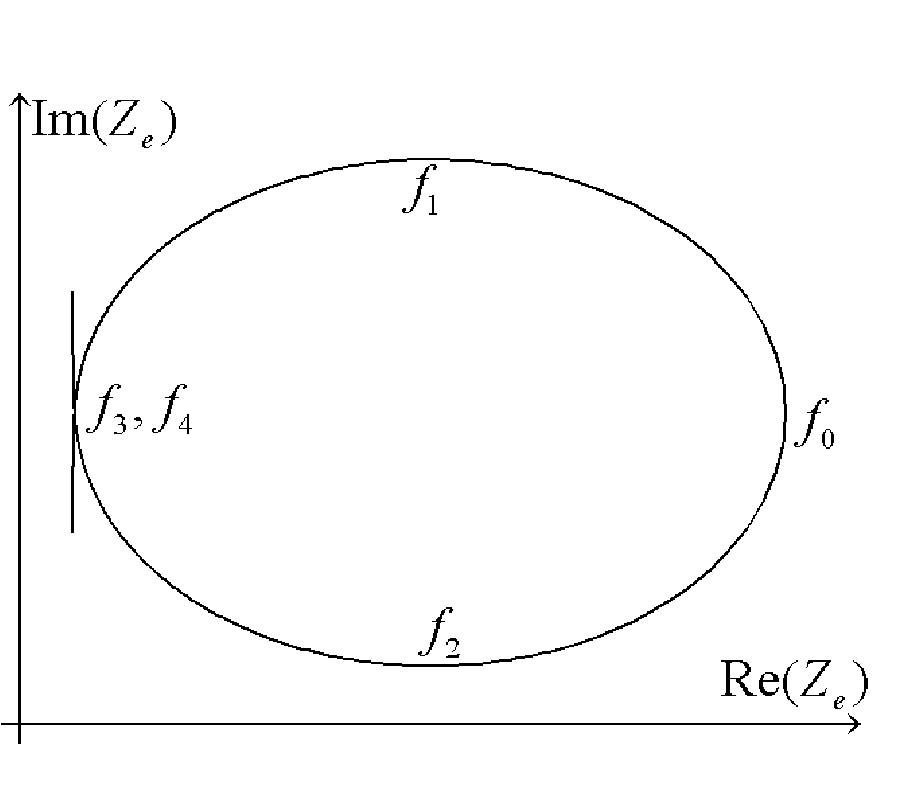 The critical-points method is adopted for measuring unloaded Q-factor of microwave resonators in the presence of phase shift caused by the feed line. The result is calculated from four frequencies of three points in the resonator's impedance trace. In fact, the resonator's impedance trace rotates in Smith Chart by the phase shift. If Q-factor were gotten directly from the measured impedance including feed line rather than the equivalent impedance of the resonator without feed line, the performance of measurement will be impaired. To de-embed the phase shift, objective function was introduced to find the proper rotation angle caused by the feed line instead of calibration using extra measurement. Another advantage of the proposed method lies in the fact that no special attention is needed to distinguish magnetic coupling and electric coupling. The effectiveness of the proposed method was demonstrated by one set of simulation data and two measurement examples, namely, a low Q dielectric resonator and a high Q hollow cylindrical cavity. 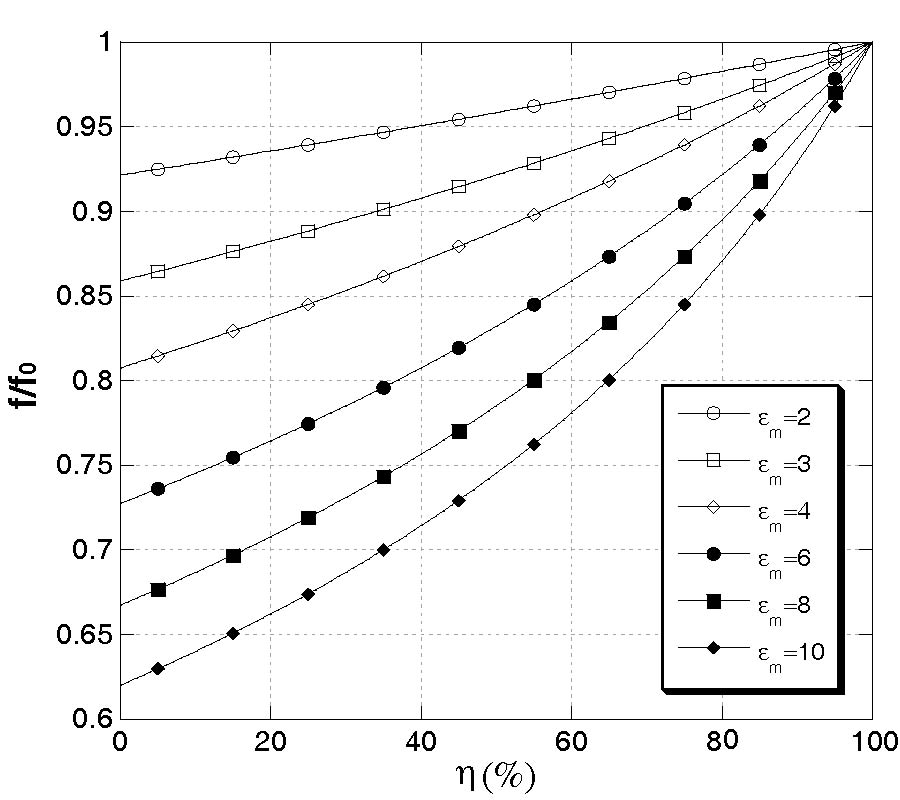 An air-spaced coaxial-fed patch antenna to be used as a microwave sensor for non-destructive porosity measurements in lowloss dielectric materials is presented. The variation of the patch resonant frequency when it is put on the surface of the material under test is used to estimate the dielectric permittivity. Then, a standard two-phase mixture model is used to derive the material degree of porosity from the above permittivity estimate. Measurements at the 2.4 GHz ISM frequency band have been carried out on a set of polymeric samples with artificially induced porosity. The specific choice for the operating frequency is related to the final goal of applying the above microwave sensor for quality control of ceramic materials during the production process.