A 77 GHz microstrip antenna array with a small surface providing high side and grating lobe suppression is presented. This may serve as a starting point for 77 GHz automotive radar applications. Multiple Wilkinson dividers guarantee both impedance matching at the input port (TX) as well as low return loss for the incoming (RX) signal. Phase shifting is done by adjusting the level of the Wilkinson dividers or by meandered sections of transmission line. The influence of the radiation caused by the feeding network is analyzed and the absolute degradation in side lobe suppression is derived in this paper. 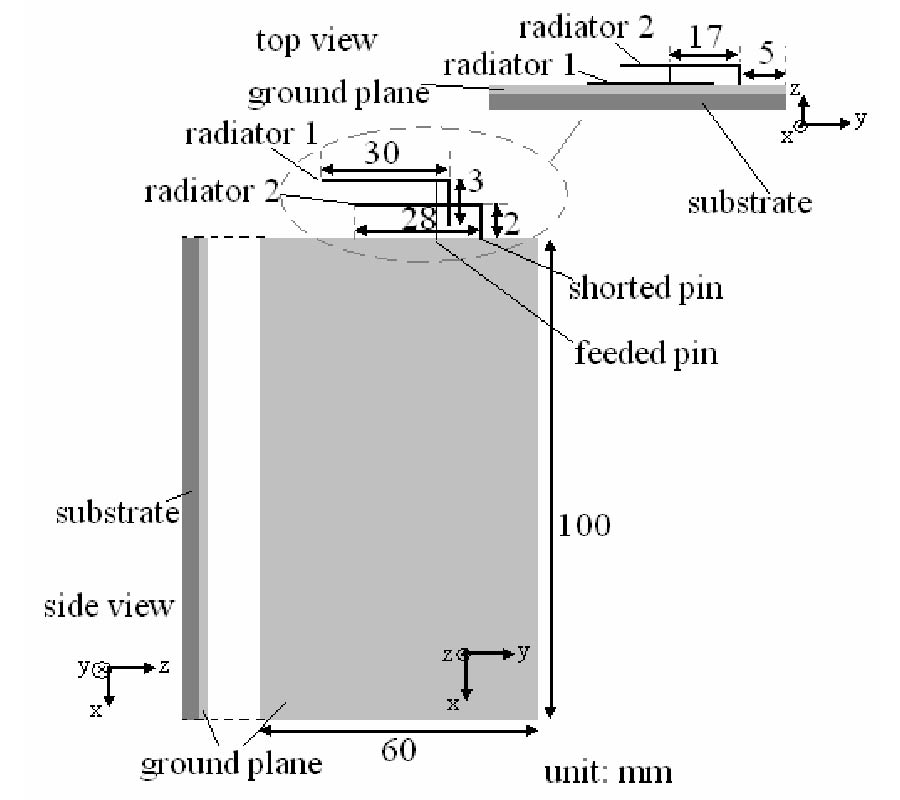 A small 3-Dimensional (3-D) multi-band antenna of "F" shape is proposed for portable phones' applications. The designed configuration of the proposed antenna is different from traditional Planar Inverted-F Antenna (PIFA) radiators. The proposed antenna has the good characteristics of wide band. The ratio of impedance bandwidth to the central frequencies 2.5 and 5.1 GHz is 28.6 % and 9 %, respectively. It can be applied to Bluetooth (BT) 2.4 GHz and Unlicensed NII - 5 GHz, UNII-1 5.1 ~ 5.25 GHz and UNII-2 5.25 ~ 5.35 GHz. The experimental results have fairly good agreement with the simulation data by High Frequency Structure Simulator (HFSS). 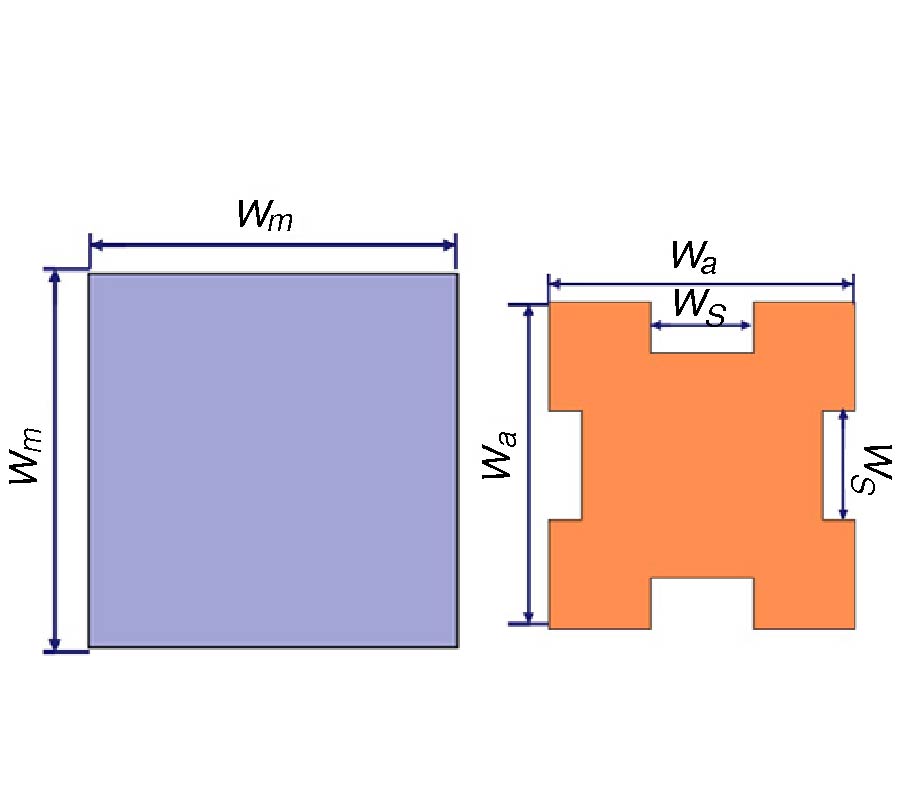 In this paper, a fractal dual-polarized aperture-coupled microstrip antenna is presented. The proposed antenna adopts 1st Minkowski fractal patch and is fed by the aperture-coupled structure with H-shaped and H-shaped loaded capacitance. The size of Minkowski fractal patch is reduced by 20% compared with a square patch. Results show that the T/R isolation is better than 35 dB, improved by 2 dB compared with the double H-shaped slots. The gain is more than 8 dB, and the front-back ratio is greater than 20 dB in the operating frequency range. Both simulated and experimental results are in good agreement. 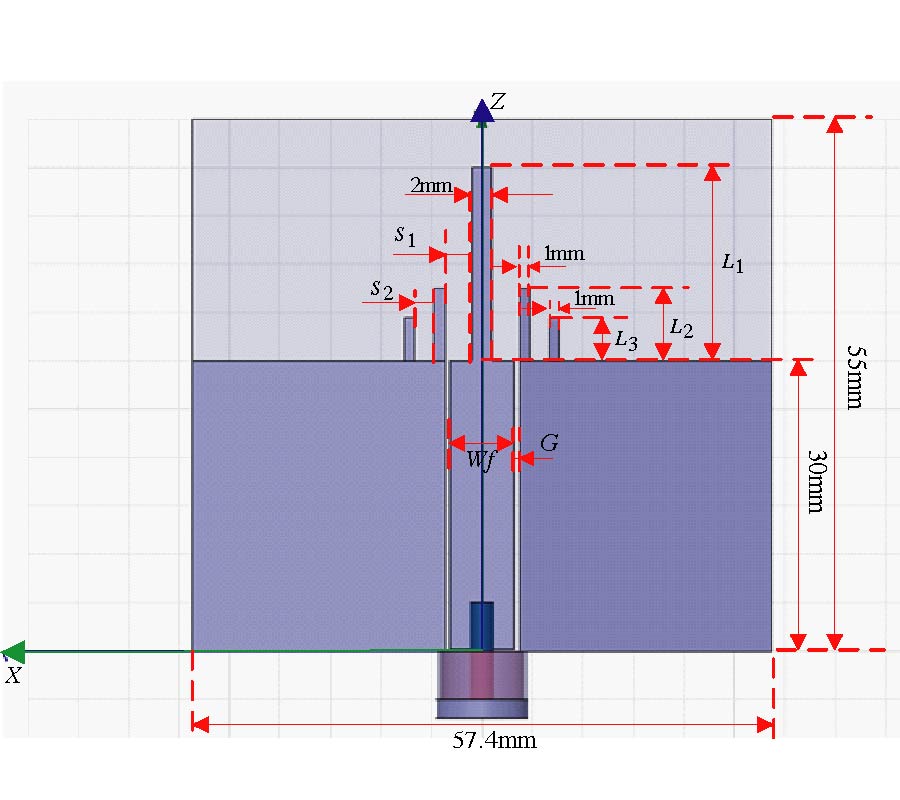 A novel design of printed sleeve monopole antenna is presented in this paper. Because of using double-sleeve and CPW-fed technique, this antenna has advantages of ultra-wideband (UWB) impedance characteristic, simple structure, easy fabrication and low cost. The details of simulated and experimental results for the proposed design are presented and discussed. This antenna can be designed for UWB wireless communication applications. 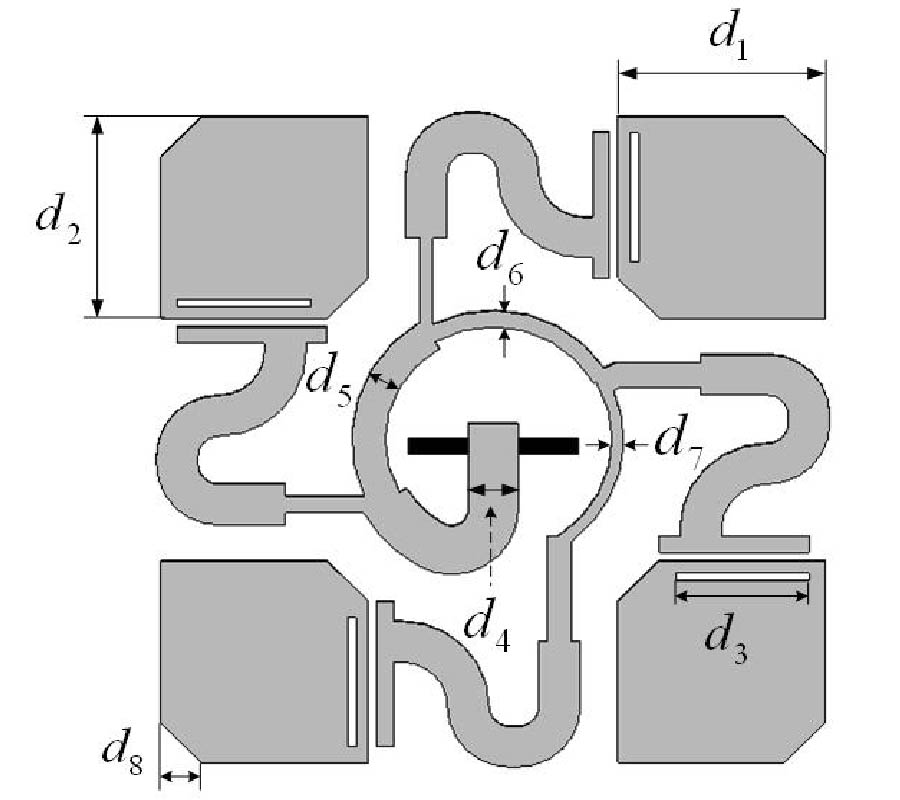 A novel circularly polarized array designed for millimeter wave digital radar module was proposed and validated in this paper. The circularly polarized array was designed with single feeding point for easily integrating with front-end module. A new kind of medium filled circular cavity was employed as transition to connect the output of the T/R module and the feeding point of the array. TM010 mode was selected as the operating mode of the circular cavity based transition for its special field distribution. Good performance of flexibility, return-loss, axial ratio and radiation pattern were observed.

In this paper, simulated annealing algorithm (SA) is applied to the synthesis of cylindrical conformal arrays in order to suppress the peaks of side lobes by acting on the elements' positions. There are multiple optimization constraints including the number of elements, aperture and minimum element spacing. A constraint matrix is designed to make the solution meet the restriction on the minima distance between elements, and the individual matrix which forms on the basis of constraint matrix is used to express array configurations. The SA does not act on the elements' positions directly but on the variables in a smaller solution space, this indirect description method makes the SA more computationally efficient. The simulation results confirm the great e±ciency and robustness of the proposed method.

Measuring Complex Permeability of Ferromagnetic Thin Film Up to 10 GHz

The complex permeability of ferromagnetic thin films is measured up to 10 GHz by using shorted microstrip method combining with conformal mapping. The S-parameters are measured by vector network analyzer (VNA), and the effect of thin film placed both upwards and downwards in the fixture are investigated. The experimental results show that the complex permeability of the thin films is measured accurately from 500 MHz to 10 GHz, and loading the samples with thin film placed downwards can avoid the electromagnetic resonance effectively.

A printed compound air-fed array antenna with hexagonal configuration is developed, which consists of a stacked-patch radiator, an FSS-cover an AMC-base both with square elements arranged as a hexagonal grid respectively. By means of optimal option for all the structural parameters individually, a broadband prototype is designed at 10 GHz, the peak-gain of 17.11 dBi is performed by hexagonal aperture with side-length of 45 mm (1.5 wavelength); a common frequency bandwidth of 8.20 % for VSWR ≤ 2.0:1 and gain-drop ≤ 2 dB and SLL ≤ −15 dB is obtained by simulation. They are verified by measured results as 16.59 dBi peak-gain and 7.54 % common bandwidth.

In this paper, the Matrix-Pencil method is used to retrieve the radiation pattern of several antennas measured in different semianechoic scenarios using low directive probes, where the existence of reflected contributions can severely disturb the measurement. Starting from data measured in the frequency domain, this method allows the direct path to be identified and the radiation pattern of the antenna to be retrieved with good accuracy in all the cases under study. 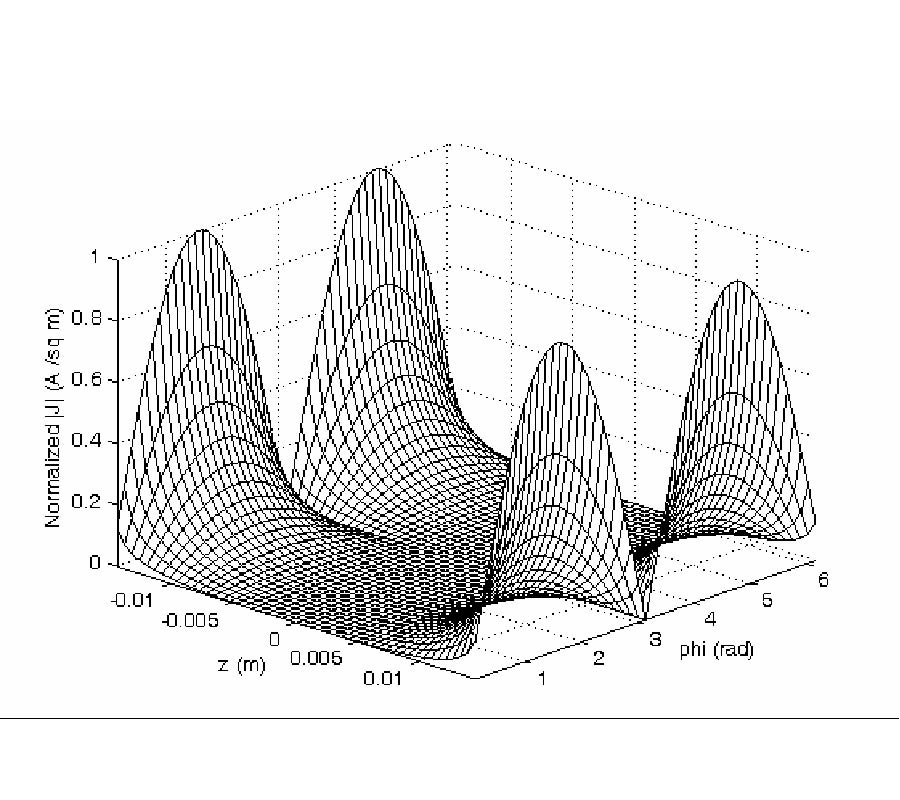 In this work, a Quasi Monte Carlo (QMC) Integration Technique using Halton Sequence is proposed for the Electric Field Integral Equation (EFIE) in the Method of Moments (MoM) solution for scattering problems. It is found that the Halton Sequence used in QMC integration scheme is capable of handling the singularity issue in the EFIE automatically and at the same time provides solution to the scattering problems very easily. Finally the proposed technique is applied to solve the scattering problem from a finite cylinder employing the entire domain basis function expansions. The results obtained show a good agreement between the proposed and conventional technique.

In this work we theoretically study the optical properties of a multilayer Fabry-Perot narrow band transmission filter containing a metamaterial negative-index defect. As in the usual Fabry-Perot filter design, the negative-index defect is sandwiched by two quarter-wave dielectric mirrors. Some useful design rules on selecting value of the negative-index of the defect have been numerically elucidated. Such narrow band transmission filtering is achieved when the refractive index of defect is either a negative even integer if the thickness is taken as a quarter of design wavelength; or a negative odd integer if the thickness is taken as a half of design wavelength.

A new approach to design digitally tunable optical filter system by using semiconductor optical amplifiers (SOAs) and Dense Wavelength Division Multiplexed (D.W.D.M.) thin film filter based wavelength selection elements is presented. The system designed with this approach is very easy to configure and expand, smaller in size, lesser in weight, cheaper in cost and consuming less power as compared to design suggested by other researchers recently.

Scattering Cross Section of a Meta-Sphere 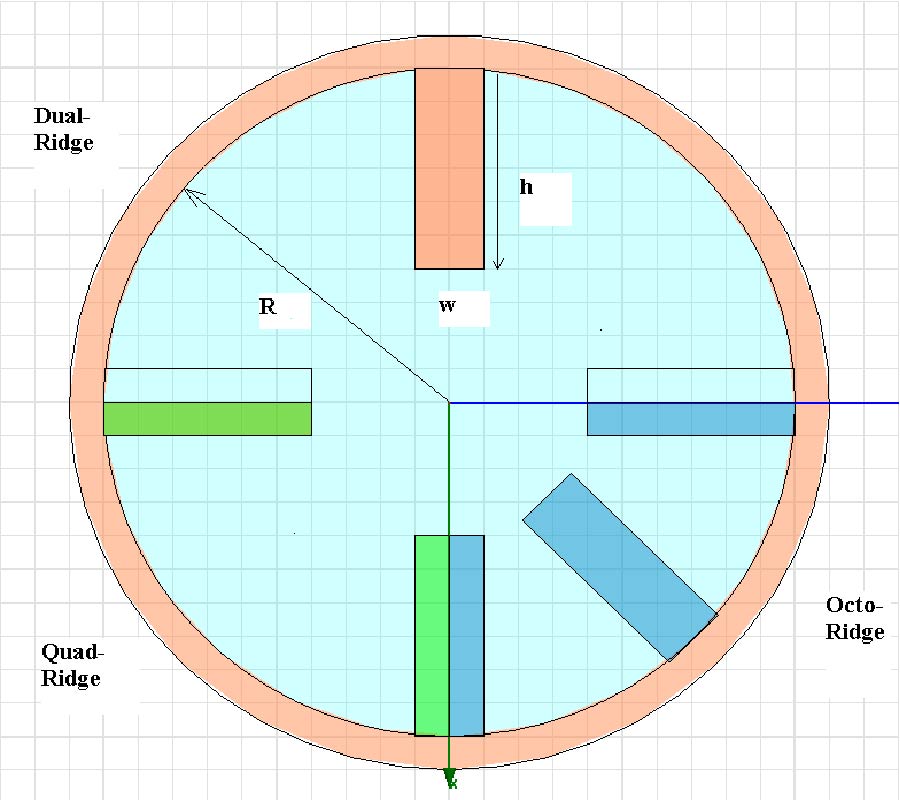 Studies of dual channel, polarisation agile, quad-ridge and octo-ridge feeds suggest that mode degeneracy in multi-ridge structures severely constricts operational bandwidths, for a large range of ridge dimensions. Mode characteristics in dual-ridge, quad-ridge and octo-ridge waveguide are examined in this paper, with a view to identifying both the nature of the degeneracy, and its implications for bandwidth. The results presented have been generated using a full-wave finite element electromagnetic field simulator. 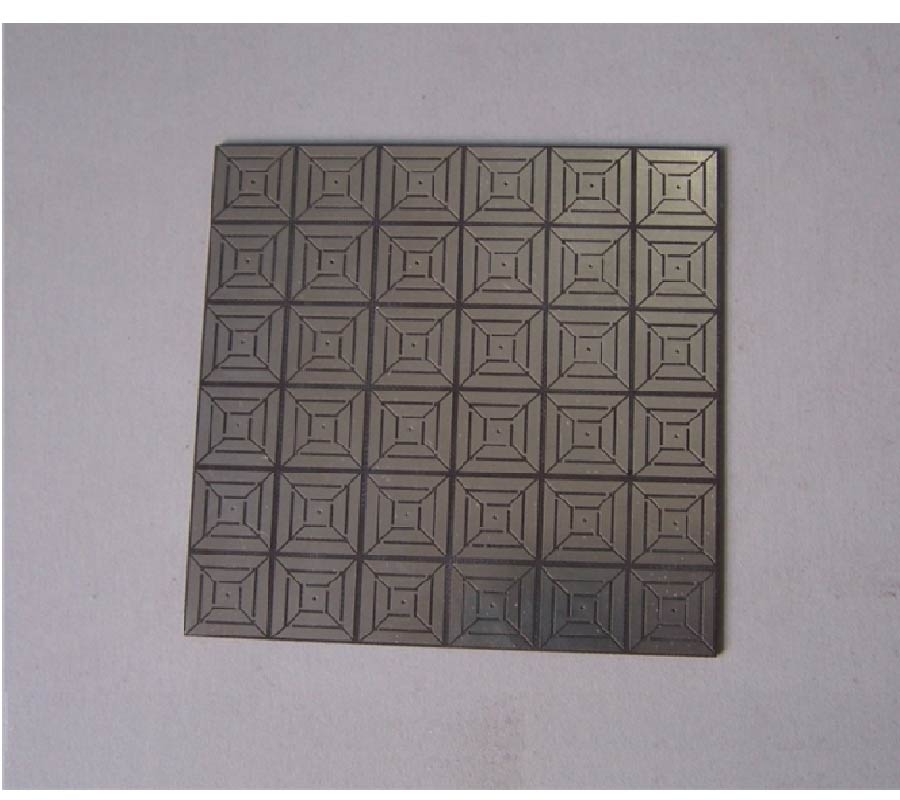 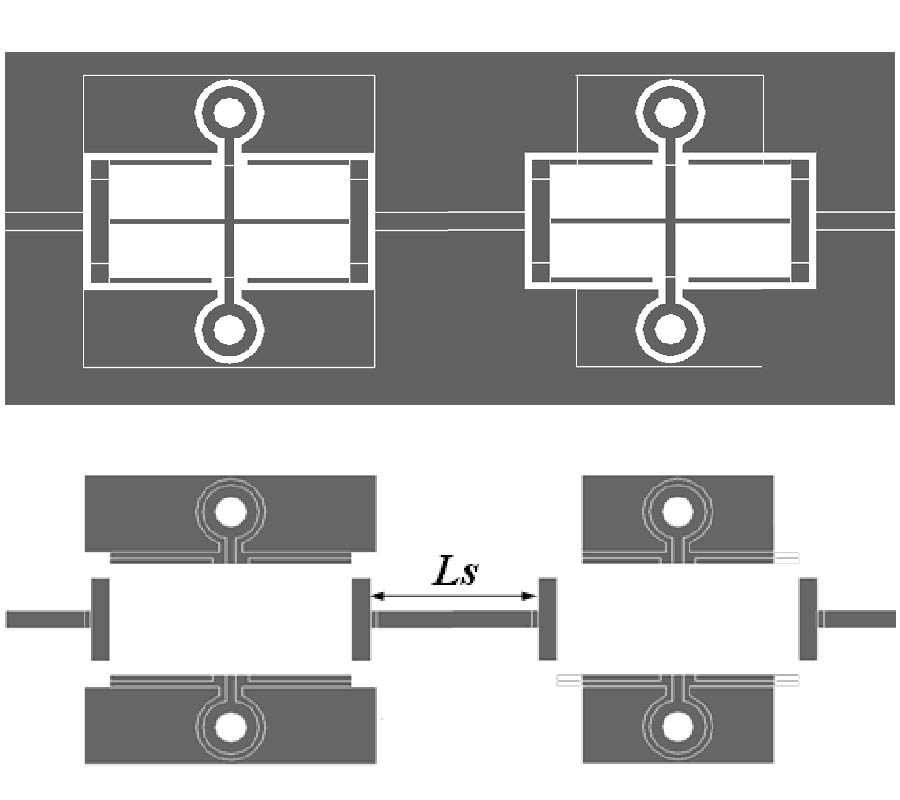 A bandpass filter (BPF) using CPW combined with microstrip is proposed. The target BPF is composed of two element filters built from combined CPW and microstrip structure. The design of element filter is based on the lumped elements approach with each circuit component built from a CPW or microstrip. In the circuit model, transmission zeros are created by the passband edges to enhance the signal selectivity. The element filter's characteristics are analyzed by the lumped L-C circuit model. Experiment is conducted, and a good agreement is observed between the measurement and simulation. 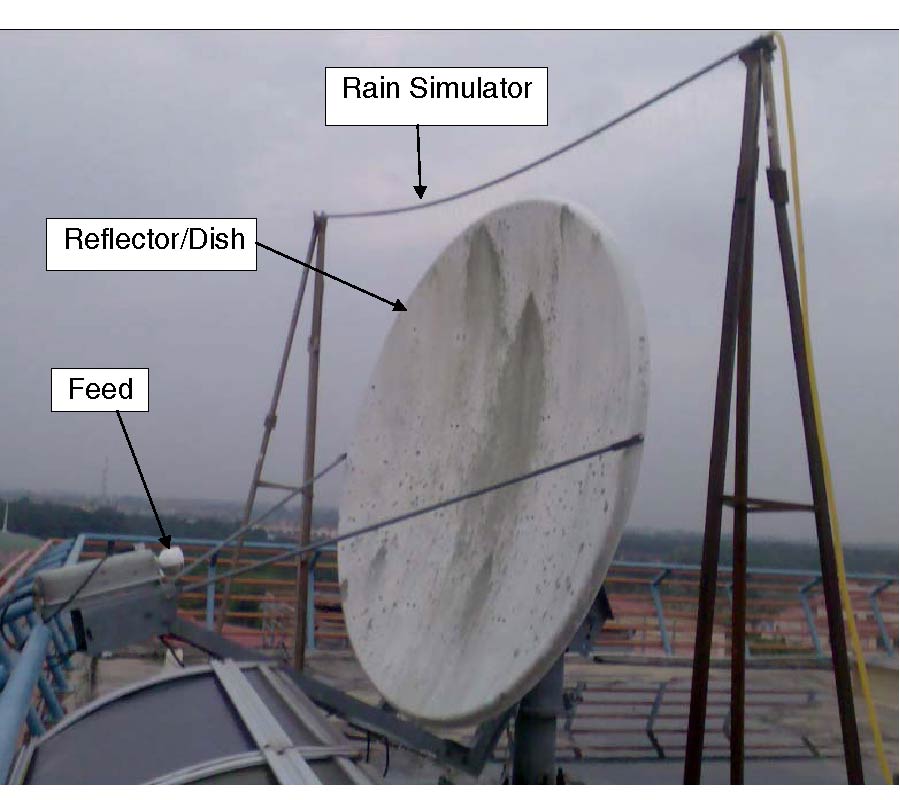 Analysis Effect of Water on a Ka-Band Antenna

Wet antenna attenuation during rain events is examined through carrying out simulated rain experiments. These were conducted on the receiving antenna located at Penang, Malaysia. The findings from these experiments are used to estimate rain attenuation data for that path by adjusting the collected data for wet antenna attenuation. This was done for the 1-year period of March 2007 to February 2008 and includes average and worst month cumulative distribution functions. The results of the measurement indicated that the wet antenna effect is a significant attenuator, and should be included in a link budget. The measured attenuation values were 4 dB for the wet feed window and total reflector plus feed window attenuation value of 6.3 dB at 20.2 GHz, at a rain rate of 100 mm/h.

The paper presents the ionospheric effect on the power transmitted by satellite solar power station. Consequently, the Faraday rotation and losses due to ionospheric layer are calculated at 2.45 GHz frequency. It is observed that the fluctuation in the Faraday rotation in day time is found to be the maximum as compared to the night hours and. Loss due to depolarization is found to have the maximum value at noon hours for all the seasons (summer, winter and spring) however, the loss is the highest for summer season as compared to winter and spring season. This is logically correct because the ionization is the highest in summer in comparison to winter which gives rise to maximum electron content and maximum depolarization. 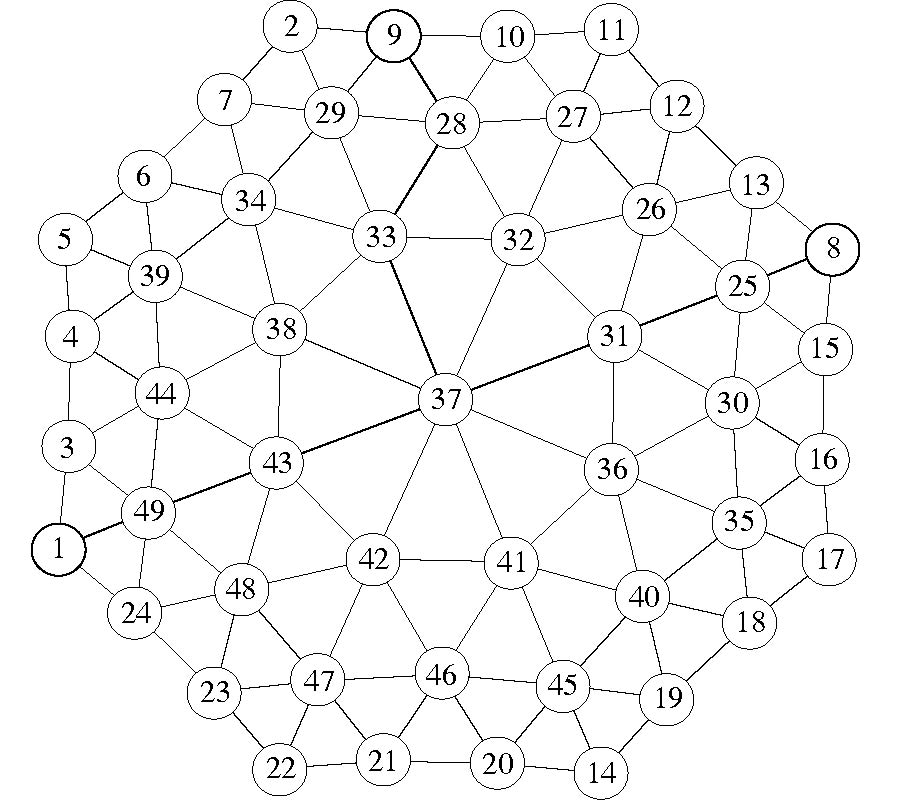 In finite element analysis, methods for the solution of sparse linear systems of equations usually start out with reordering the coefficient matrix to reduce its bandwidth or profile. The location of pseudo-peripheral nodes is an important factor in the bandwidth and profile reduction algorithm. This paper presents a heuristic parameter, called the "width-depth ratio" and denoted by κ. With such a parameter, suitable pseudo-peripheral nodes could be found; the distance between which could be much close to or even to be the diameter of a graph compared with Gibbs-Poole-Stockmeyer (GPS) algorithm. As the new parameter was implemented in GPS algorithm, a novel bandwidth and profile reduction algorithm is proposed. Simulation results show that with the proposed algorithm bandwidth and profile could be reduced by as great as 33.33% and 11.65%, respectively, compared with the outcomes in GPS algorithm, while the execution time of both algorithms is close. Empirical results show that the proposed algorithm is superior to GPS algorithm in reducing bandwidth or profile. 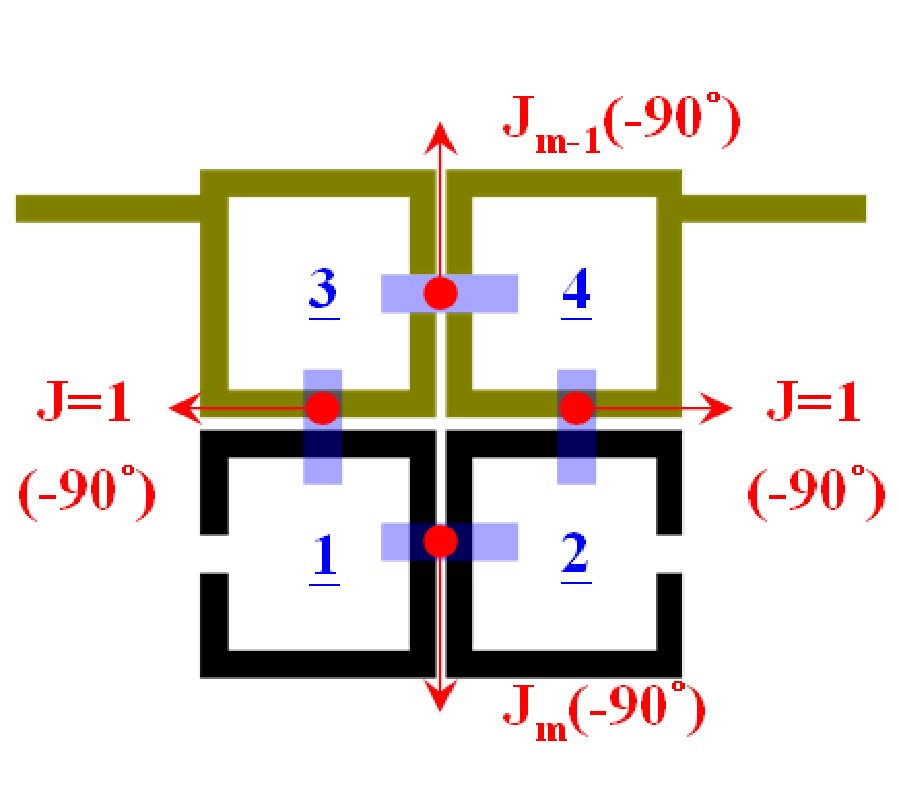 This paper presents novel approaches for dual-band bandpass filter design utilizing stepped impedance simplified cascaded quadruplet resonators (SI-SCQRs) with slot coupling. A pair of SI-SCQRs forms a cross coupled dual-band filtering path to provide high selectivity passband response, and a slot coupling structure provides SI-SCQRs with another filtering path for improving and controlling the performances of the dual-band filter such as insertion loss and bandwidth. Measured insertion losses are 0.26 dB and 1.2 dB and return losses are better than 16.3 dB and 15.2 dB at the first and second passband frequencies, respectively, with a mid-stopband attenuation around 30 dB. 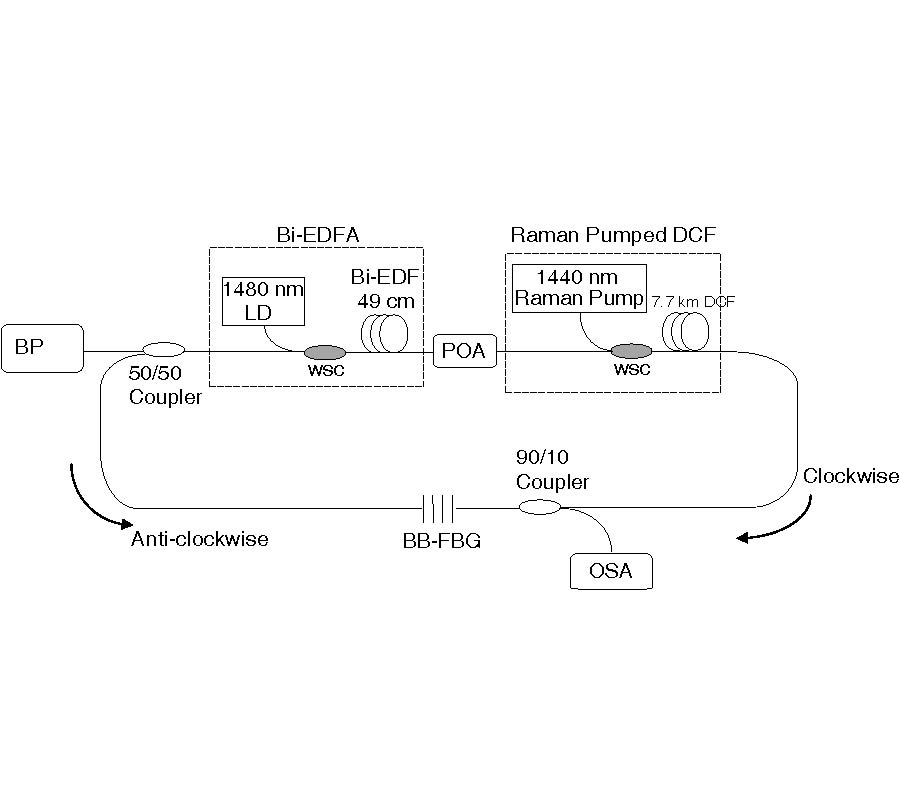 We propose and demonstrate a Multiwavelength Brillouin Bismuth/Erbium Fibre Laser (MBBEFL) with the ability to control the number of wavelength channels generated. A multi-wavelength comb output is obtained using a 7.7 km DCF as a non linear gain medium to generate Stokes wavelengths through the process of Stimulated Brillouin Scattering (SBS). The DCF is pumped by a Raman pump source at 400 mW to lower the dispersion loss and promote the generation of the Stokes wavelengths. A 49 cm long Bismuth based Erbium Doped Fibre (Bi-EDF) is used as an optical amplifier to provide the necessary gain for the Brillouin Pump and also act as the gain medium for the generated Stokes signal.

Ellipsometry on a Planar S-Shape Metamaterial

In this paper we present the results of ellipsometry on a grid of S-shape particles engraved on an epoxy substrate. We show the value of the ellipticity and the tilt angle of the principal axis of ellipsis of the transmitted wave as a function to the angle between the polarisation of the incident plane wave and the principal axis of the particles. The optical axes of the material are found, and the dependence of the absorption to the angle of polarisation is shown. Using a least squares method with the measurements, we calculate the dichroism and the birefringence of the material.